Jeffrey’s father, who was partially responsible for his son’s disturbing upbringing, wrote in his book, “A Father’s Story” that the prescription drugs that Joyce Flint took whilst her pregnancy, could have negatively affected Jeffrey’s brain. On the other, Joyce Flint wanted to give his brain to science at the time of his death. Read on to learn more about this woman, who didn’t care much about putting a leash on her son. 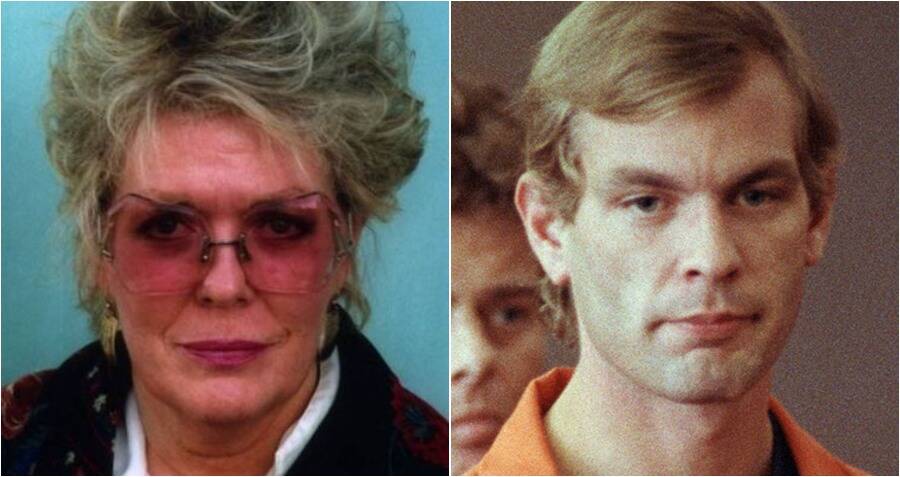 All About Joyce Flint… Jeffrey Dahmer, infamously known as the “Milwaukee Cannibal” or “Milwaukee Monster”, was the son of Joyce Flint, a teletype machine instructor and Lionel Herbert Dahmer, a man of science with multiple degrees from renowned state universities. Joyce Flint was born on February 7, 1936, to Floyd and Lillian Flint.

Jeffrey’s mother reportedly spent most of her childhood in Wisconsin. She was of Norwegian and Irish descent. Netflix’s new series “Monster: The Jeffrey Dahmer Story”, also provides a closer view into the early life of this woman. For a long time, Joyce suffered from depression and was reportedly described as a hypochondriac.

Jeffrey was a product of a trauma-filled household where his mother, Joyce was known to be tense, and greedy for attention and pity. Not only this, she was seen getting into constant arguments with her husband, Lionel and her neighbors. Many sources reveal that Jeffrey was deprived of attention as an infant.

As Lionel kept himself away from home due to his university studies, his wife, Joyce, who was hypochondriac and depressed demanded constant attention and spent most of her time in bed. Jeffrey started feeling “unsure of the solidity of the family” and recalled extreme tension and arguments between his parents during his early years.

Joyce Flint suffered more during her second pregnancy with Jeffrey’s younger brother, David Dahmer. She spent a month in a psychiatric hospital when Jeffrey was 10 years old. The new Netflix series depicts that his mother was diagnosed with “postpartum psychosis”, which means she remained extremely confused, paranoid, delusional and lost the touch with reality. Jeffrey was abandoned by his mother after her divorce from Lionel in 1978. This year, Jeffrey committed his first murder, and his crimes continue to grow.

Some of Jeffrey’s later murders involved “necrophilia, cannibalism, and the permanent preservation of body parts.” After Jeffrey’s death, his father attempted to find out how his son turned out to be such a monster. In his book, “A Father’s Story”, Lionel discussed the difficulties faced by Joyce during her pregnancy with Jeffrey. He wrote: “she suffered greatly, with bouts of vertigo, extreme nausea, and a strange physical rigidness doctors couldn’t explain.”

During that time, Joyce was prescribed heavy doses of Phenobarbital and morphine. Lionel framed a theory that such drugs may have contributed to her son’s later struggles with mental illness. However, it was Lionel who gained monetary benefit after his son’s death. He started appearing in several documentaries to tell his part of the story.

Was Jeffrey’s Mother Supportive Of Him? After Jeffrey was arrested in 1991, his mother, Joyce, stated that she was hurt by her son’s actions. But again, she continued to call him every Sunday. In several interviews, Joyce continued to express her love for this monstrous killer, cannibal and sex offender. In 1993, just a year before his death, Joyce stated: “I wake up every morning and for a split second I don’t know I’m Jeffrey Dahmer’s mother, and then it all floods in.”

As for Jeffrey’s sexual orientation, Jeffrey’s mother, Joyce supported his gayness while his father, Lionel did not tolerate his sexuality. In a book, “Milwaukee Massacre: Jeffrey Dahmer and the Milwaukee Murders”, it is reported that Lionel, a fundamentalist Christian, often made negative comments about gay men and lesbians throughout Dahmer’s childhood and remained against homosexuality even after Dahmer’s trial.

After Jeffrey Dahmer was murdered in prison, Joyce Flint made several attempts to take her life, however, she survived. She even wrote a note that read:  “It’s been a lonely life, especially today. Please cremate me. I love my sons, Jeff and David.” Joyce and Lionel ended up in an argument when Jeffrey was to be cremated in 1995.

She wanted to donate this serial killer’s brain to science because she wanted it to be studied to assess if there was a medical condition for his behaviour. On the other hand, Lionel wanted it to be cremated with the rest of his remains.

Joyce was against her ex-husband’s theory that “there were warning signs or that Jeffrey was shy”. In an interview, Joyce argued that he was a perfectly normal young boy and a fantastic young man. However, she expressed her desire to meet the families of Jeffrey’s victims. Joyce even wanted to write a book to counter the claims in her husband’s book but stated that no publisher was interested. On her role as a parent, Joyce revealed: ‘I knew that I’d done a good job as a parent. I knew this had to come from something outside of Jeff. I think there’s a lot to be learned, and one of the things that our society does have to be aware of is that we still do have prejudice. We have a stereotype, and we still do blame mothers.”

While Lionel and Joyce barely took any responsibility for their son’s heinous crimes, it is certain that his mother was never convinced that Jeffrey was sane while murdering, dismembering and eating body parts of his victims. During his trial, Jeffrey Dahmer revealed how he ate his victims. He said, “Once I fried the biceps of a man in oil, I used a meat tenderizer and ate the muscle because it was big and I wanted to try it,” Jeffrey added that it tasted like beef.”

Where Is Joyce Flint Now? After her divorce from Lionel Dahmer,  Joyce Flint moved to California. Jeffrey, however, grew around Lionel’s second wife, Shari Dahmer. Just before Jeffrey was killed by Christopher Scarver in prison, Joyce attempted suicide in March 1994. At the time, she was living in Fresno and was found lying on the  kitchen floor “after turning on her gas oven and leaving its door open.”

However, Joyce Dahmer died due to breast cancer on 27th November 2000. Her friends, however, preferred to remember her as “a selfless individual who worked with the less fortunate.” The reality, on the other hand, remains, she failed as a mother. What do you suggest?