Mountains – one of the most beautiful gifts of nature to mankind.

The elevated portion of the earth’s crust rising abruptly from the surrounding level and attaining a high altitude is a treat to the eyes. The world is full of beautiful mountains. In fact, they occupy around 26 percent of the total surface of the land.

While some mountains lie low, others are high; standing as tall as 5000 meters, and even more. The mountaineers and adventure enthusiasts love to hike them, but climbing the summit of the highest mountains in the world is a tough nut to crack.

10 Highest Mountains in the World

Most of the tallest summits of the world rest on the Eurasian and Indian tectonic plates. They are home to the countries like India, Nepal, China, and Pakistan, constituting a part of the majestic Himalayan and Karakoram Mountain ranges. Curious to know about them in detail?

Here are the top ten highest mountains in the world:

The mighty Everest is the highest mountain in the world that rises 29,029 feet high. It is located in Nepal and stands on the Nepal-China Border above sea level.

The Nepalis address it as Sagarmatha, whereas the Tibetans call it Chomolungma. Being the tallest mountain in the world, Everest fascinates many hikers and mountaineers. And fortunately, climbing this mountain is relatively easy. Whether you are a naïve or a veteran, climbing its crest would be an adventure of a lifetime. The first person to do that was Tenzing Norgay.

Mount K2, also known as Mount Godwin Austen is the second-highest mountain above sea level. It rests on the China-Pakistan border in Northern Pakistan. 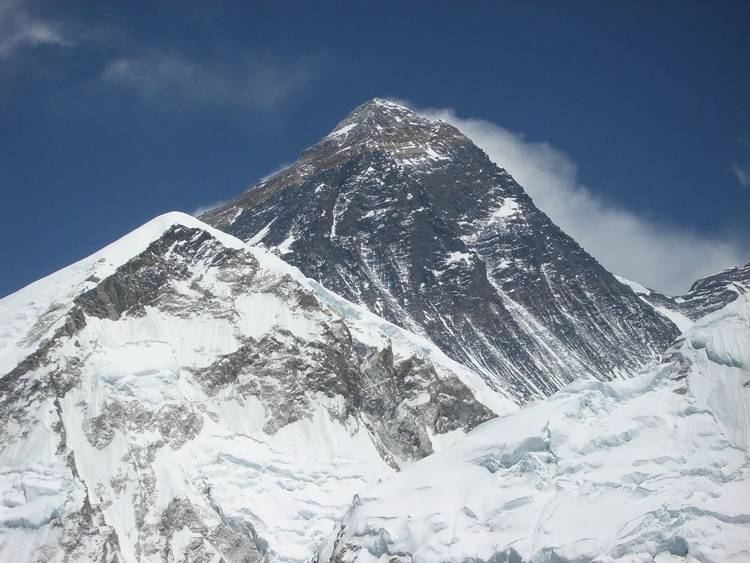 The beautiful Mount K2 also happens to be the highest point of the Karakoram Mountain Range and the summit in Xinjiang and Pakistan. Unlike Everest, climbing this mountain is no cakewalk. It is considered one of the toughest mountains to climb and has the second-highest fatality rate per summit attempt.

The beautiful Mount Kanchenjunga stands 28,169 feet high and is considered the third highest mountain in the world. Kanchenjunga also represents the surrounding section of the Himalayas. 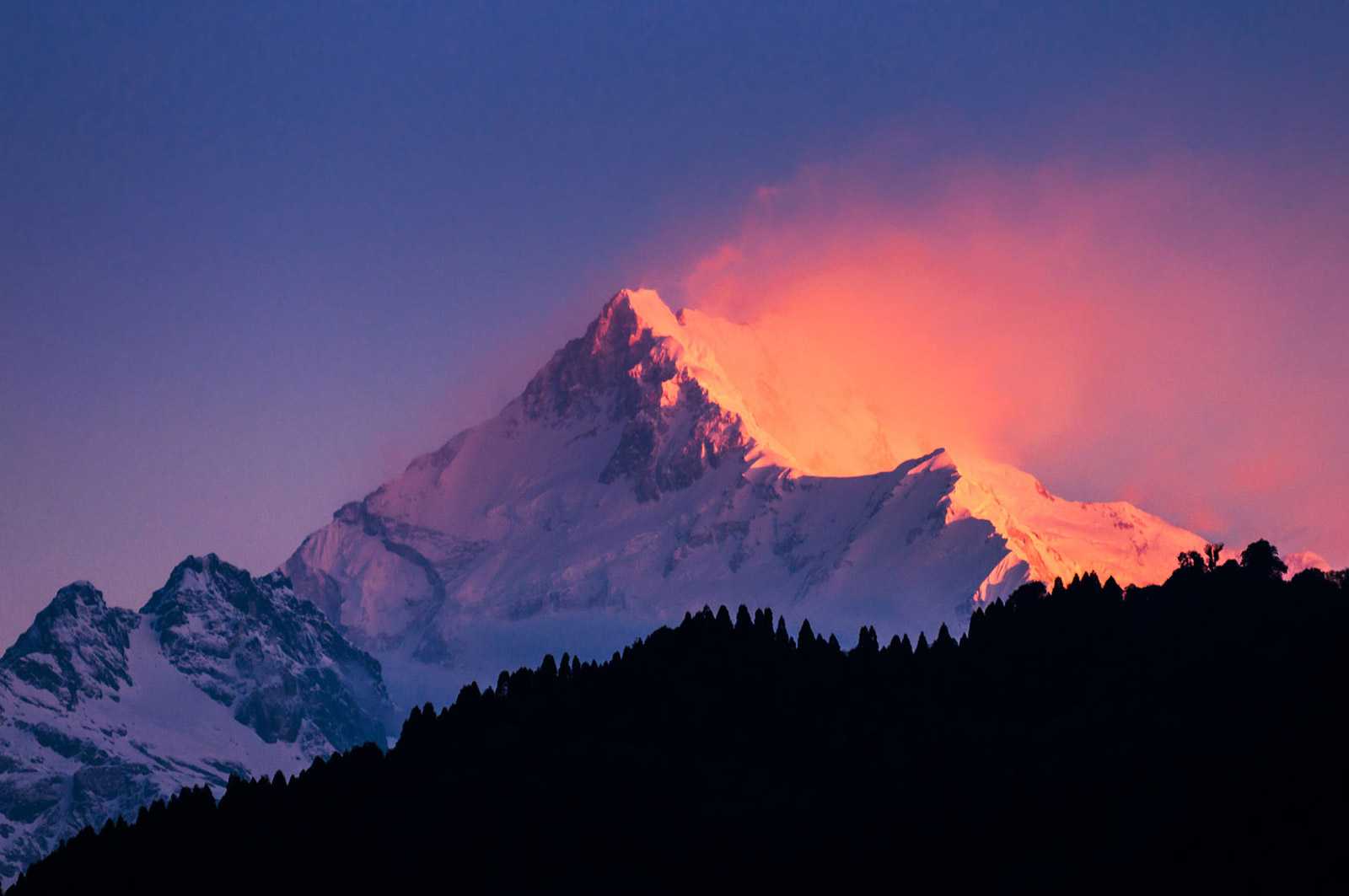 It is often addressed as ‘the Five Treasures of Snows’ as it includes five peaks. Many myths and legends highlight that these five treasures represent the repositories of God – gold, silver, gems, grain, and holy books. The mighty mountain was firstly climbed by Mr. Joe Brown and George Band.

Mount Lhotse is 24,940 feet high and is considered the fourth highest mountain in the world. It is located in the Mahalngur Himal area of the Himalayas and rests between the Khumbu region of Nepal and the Tibet Autonomous area of China.

Just like the other high mountain ranges, Lhotse too forms a portion of the Everest and is connected to the latter through a sharp-edged South Col. It also includes smaller peaks rising at different elevations respectively.

The world’s fifth highest mountain, Mount Makalu ascents 8,485 meters high. This beautiful wonder of nature, too, lies around the Himalayan Mountain range in the Mahalangur Himal section along the boundary between Nepal and the Tibet Autonomous Region of China. 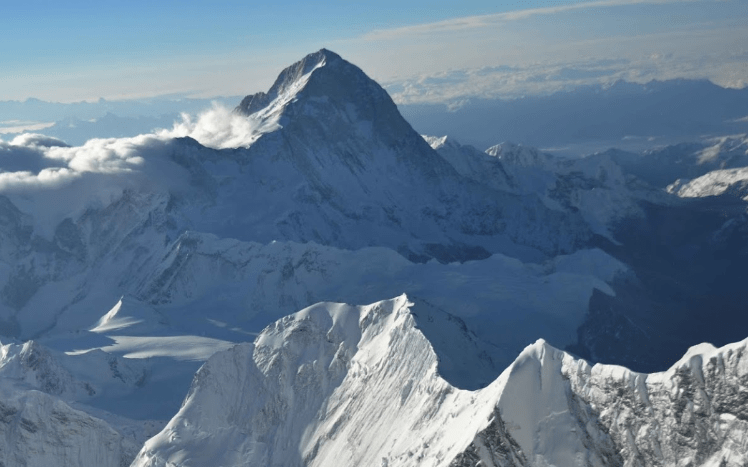 The highlight of this mountain is its pyramid-shaped peak. It is further flanked by two subsidiary peaks at different elevations. This mountain was firstly climbed by the French climbers Jean Couzy and Lionel Terray.

It is the world’s sixth-highest mountain that stands 8,188 meters high. Mount Cho Oyu forms the westernmost peak of the Khumbu sub-section of the Himalayan Mountain range and rests near the boundary between China and Nepal.

Unlike the other mountain ranges of the region, many climbers and mountaineers consider it an easy-to-climb mountain. The Austrian climbers Joseph Jochler, Herbert Tichy, and a local Sherpa Pasang Dawa Lama created history in 1954 by being its first-ever climbers.

This mountain range is touted as one of the most beautiful mountains in the world. Dhaulagiri also happens to be the seventh-highest mountain standing 26,795 feet high. It is mostly famous for its visibility on the Annapurna Circuit as Annapurna is located only 34 kilometers away from the mountain. 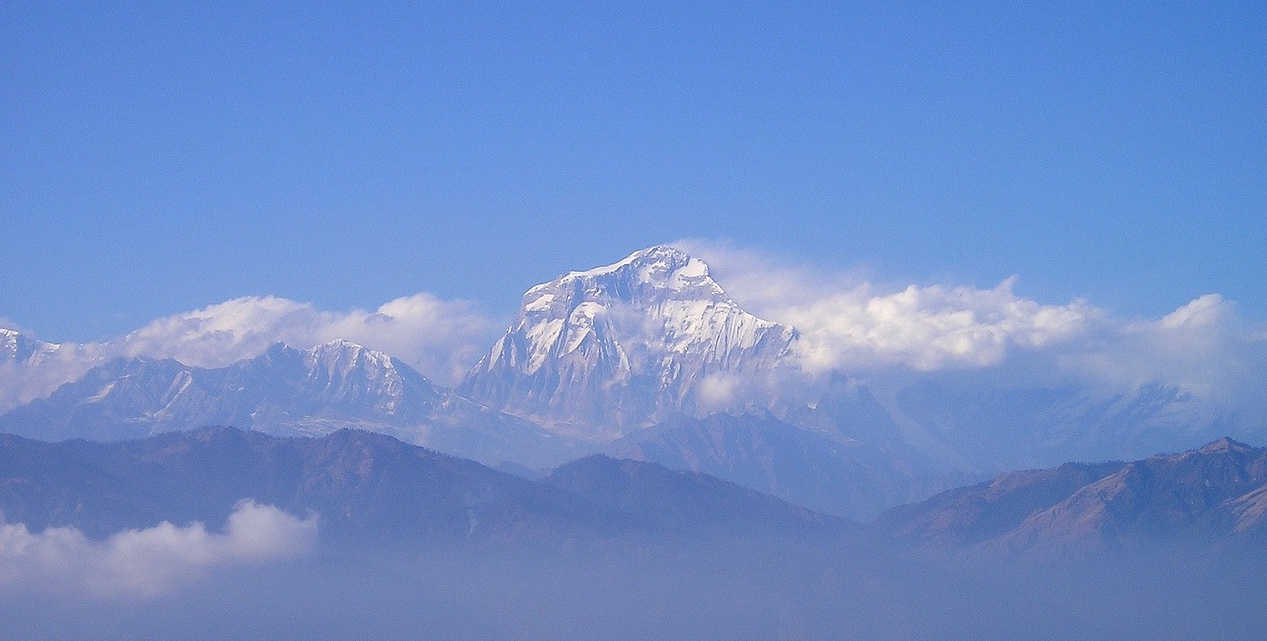 As a result, many mountaineers and climbers keep on visiting this area for some adventures and to witness the stunning scenery around this mountain. Another highlight – it is separated by the deepest gorge of the world – Kaligandaki Gorge.

Another highest mountain range located in Nepal is Mount Manaslu. Both the locals and tourists call it the ‘Mountain of the Spirit’. The name of this mountain itself means soul or intellect. 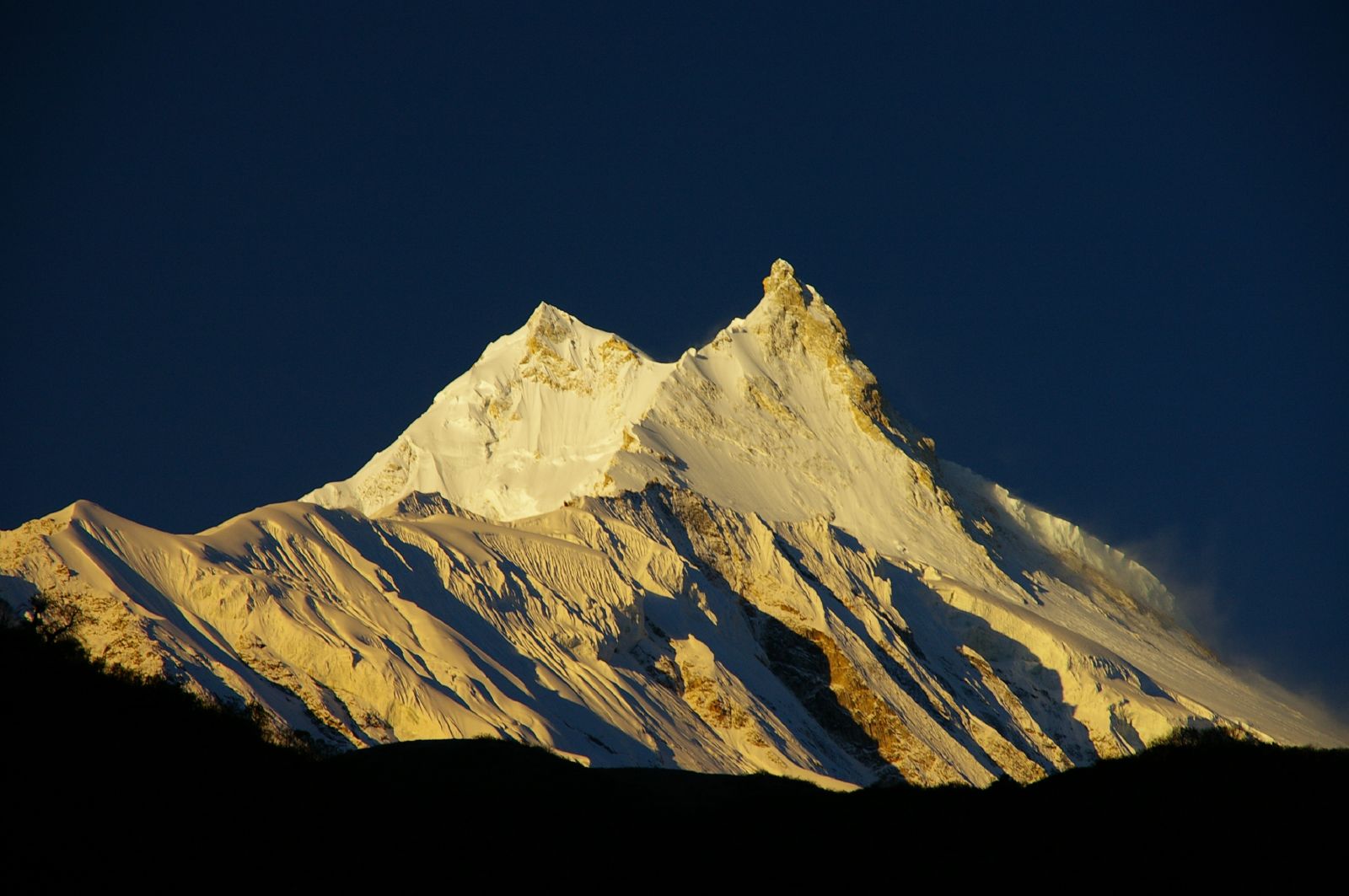 This mountain was first climbed by the duo Gyalzen Norbu and Toshio Imanishi in 1956. For all the adventurers who look forward to climbing 8000-meters – it makes the first choice.

Mount Nanga Parbat rises 26,660 high. The locals also call it Diamer because of its geographical location (Diamer district), and it happens to be the ninth highest mountain in the world. To be more specific about its location, Nanga Parbat lies in the Gilgit-Baltistan region in Pakistan-occupied Kashmir. 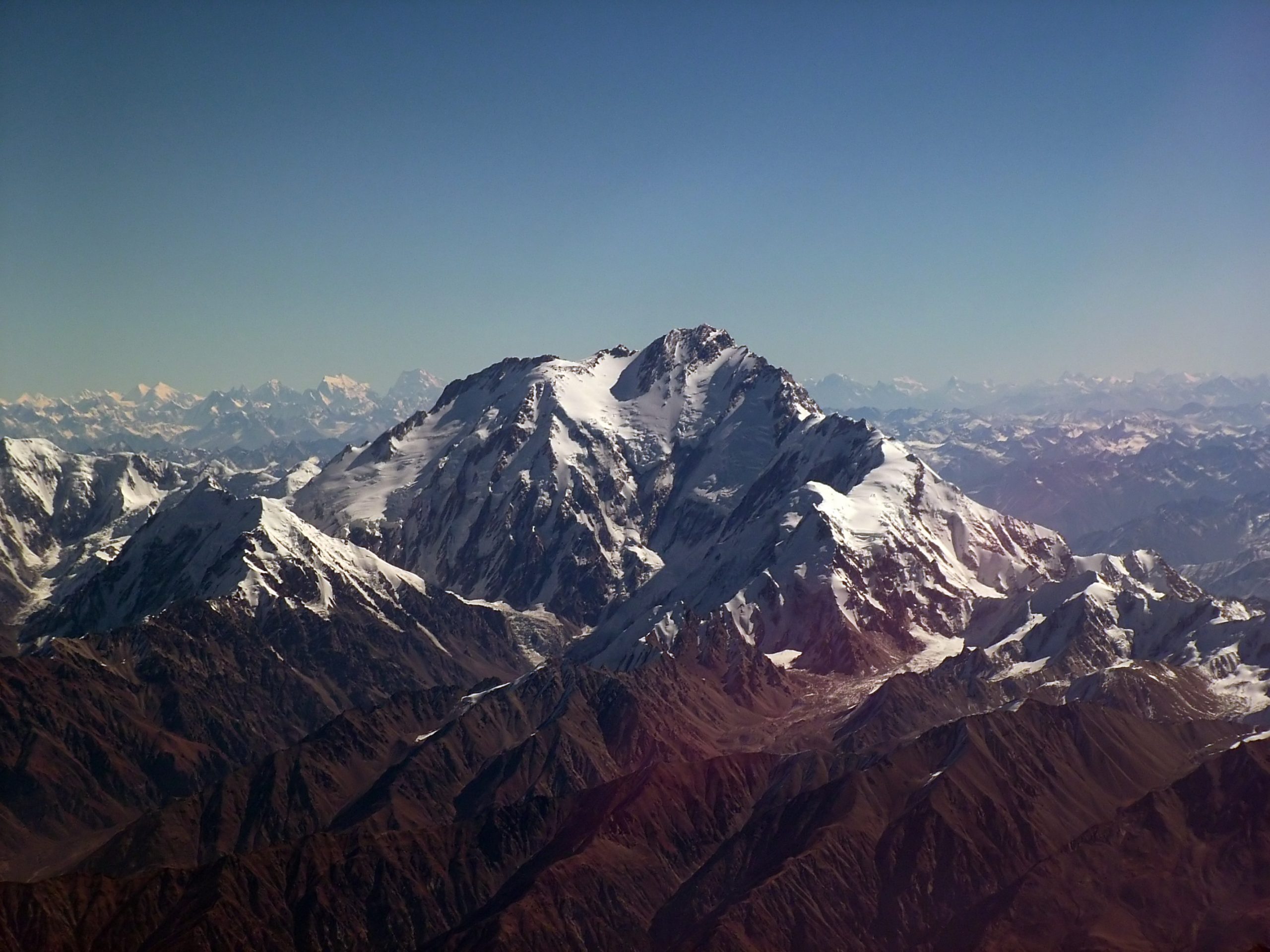 It is flanked by the Indus River in the south and constitutes the westernmost peak of the gigantic Himalayan Mountain Range. The first person to climb this mountain was Hermann Buhl, an Austrian mountaineer.

The striking Mount Annapurna is the tenth highest standing mountain in the world. It also happens to be one of the most famous mountains on the list of mountaineers, adventure lovers, and other enthusiasts because of its ‘trekking’ highlight.

But do you know that trekking on this mountain isn’t as easy as it seems? Beware because it has a high fatality rate than the others on the list. Around 32 percent of attempts have already been made to reach the summit, however, in vain. The beautiful mountain elevates up to 26,545 feet.

Mountaineering is a sought-after adventure for all those people who love climbing heights and exploring what’s on the other side. These beautiful mountain ranges are mighty high and aesthetically pleasing. But make sure to train yourself well before you begin journeying towards them.

Follow us for more on everything around the world.