Jeffrey Lionel Dahmer, known as the “Milwaukee Cannibal” or the “Milwaukee Monster”, was a notorious American serial killer and sex offender who murdered and dismembered 17 men and boys from 1978-1991, many of them persons of colour and some underage.

A Netflix Documentary Monster: The Jeffrey Dahmer Story is set to premiere in 2022, follows the murders of infamous serial killer Jeffrey Dahmer, portrayed by Evan Peters, and is told from a point of view style through the lens of his victims. Read on to learn more about the terrifying story of this monstrous man.

Who Was Jeffrey Dahmer? 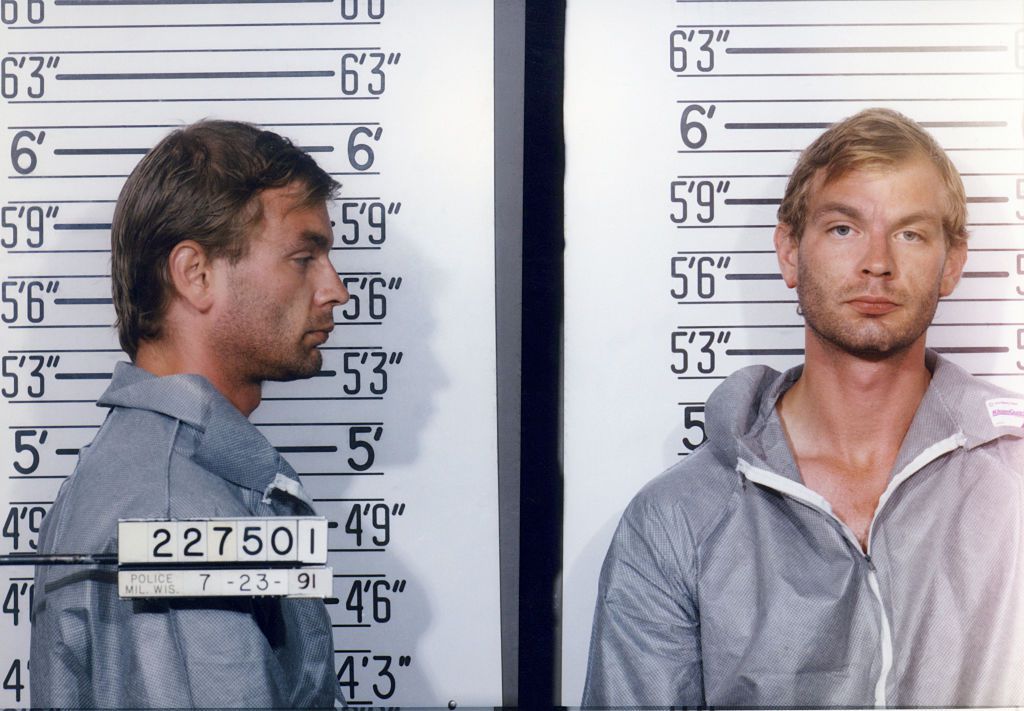 Jeffrey Lionel Dahmer was born in 1960 in Milwaukee, Wisconsin, and was the first of two sons of Joyce Annette, a teletype machine instructor, and Lionel Herbert Dahmer, a Marquette University chemistry student and, later, a research chemist. Lionel Dahmer was of German and Welsh ancestry, and Joyce Dahmer was of Norwegian and Irish ancestry.

As an infant, Dahmer was deprived of attention and doted upon by his parents.  From an early age, Jeffrey grew an interest in dead animals. According to his father, he was “oddly thrilled” by the sound of the bones made and became preoccupied with animal bones, which he initially called his “fiddlesticks”.

He occasionally searched beneath and around the family home for additional bones and explored the bodies of live animals to discover where their bones were located. In one instance in 1975, Dahmer decapitated the carcass of a dog before nailing the body to a tree and impaling the skull upon a stick in the woodland behind his house.

During his freshman year, he was seen as an outcast and during his puberty, he realised that he was gay. Dahmer later confessed that he began fantasising about dominating and controlling a completely submissive man. He once hid behind the bushes with a baseball bat to conceive a fantasy of rendering unconscious a particular male jogger he found attractive and making sexual use of his body. However, he did not do so. But, later he confessed that this was his first attempt to attack someone.

Little did we know that a  timing boy would one day, turn into a serial killer, a cannibal and a sex offender who’d end up killing and dismembering seventeen men and boys. So how and when did it all happen. Well, there’s much left to this story. 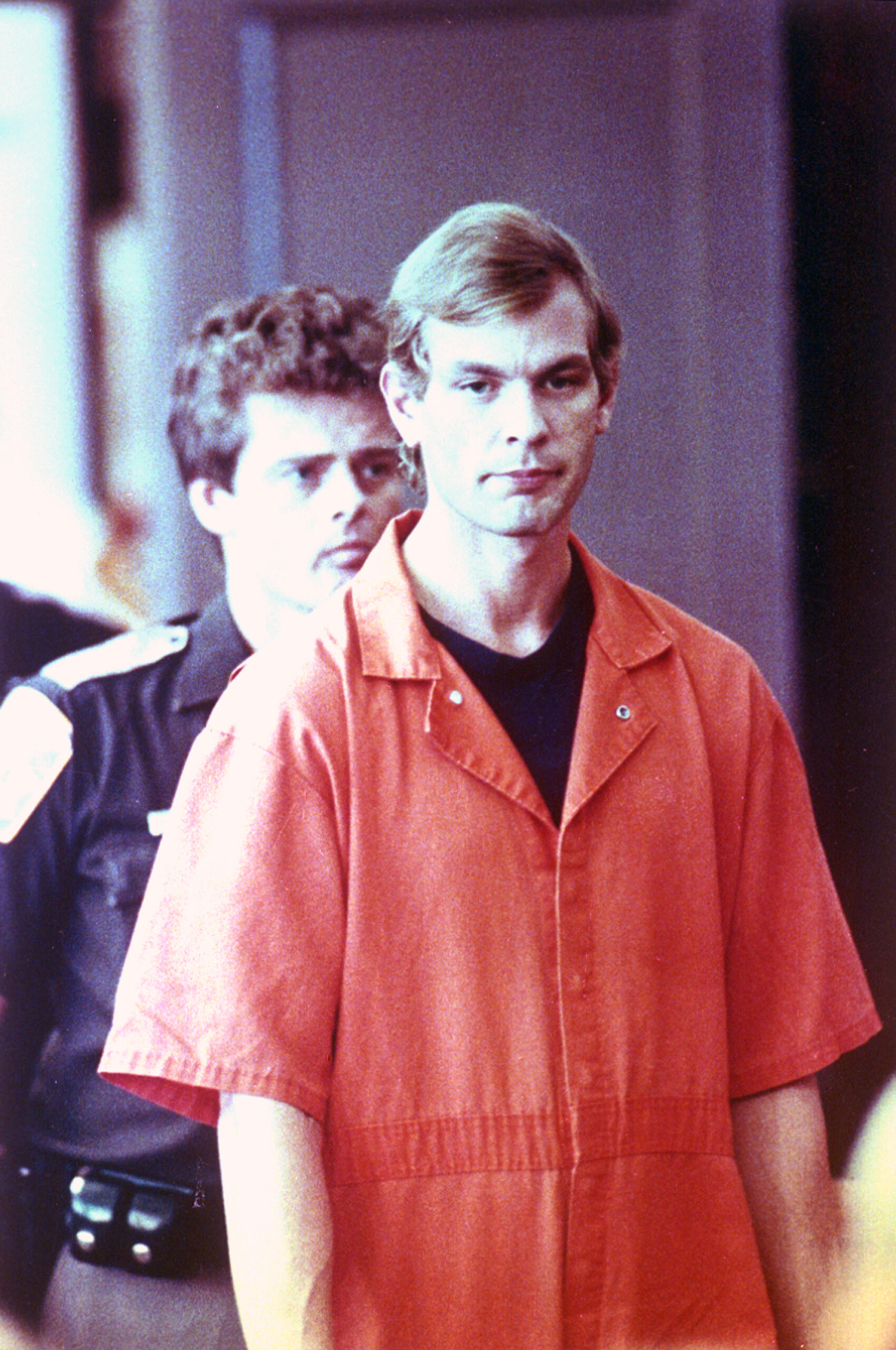 Jeffry committed his first murder in 1978, three weeks after his graduation as he picked up a 19-year-old hitchhiker named Steven Hicks. He lured the youth to his house on the pretext of drinking. Dahmer later stated that the sight of the boy’s bare chest stirred his sexual feelings, although when Hicks began talking about girls, he knew any sexual passes he made would be rebuffed.

In Dahmer’s later confession, he admitted that after several hours of drinking and listening to music, Hicks wanted to leave but he didn’t want him to go so he picked up a 10-pound dumbbell and bludgeoned Hicks with it. As he fell unconscious, Dahmer, strangled him to death with the bar of the same dumbbell and stripped his clothes. He even masturbated in front of Hicks’s corpse.

The horror did not end here as Jeffrey dissected his body in the basement and later buried the remains in a shallow grave in the backyard. Later, he unearthed the remains and dissolved the flesh in acid before flushing the solution in water. He crushed the bones with a sledgehammer and scattered them in the woodland behind the family home.

Dahmer joined the United States Army in 1979 and trained as a medical specialist in Texas. However, owing to his alcohol abuse, he received an honourable discharge, as his superiors did not believe that any problems Dahmer had in the Army would be applicable to civilian life. 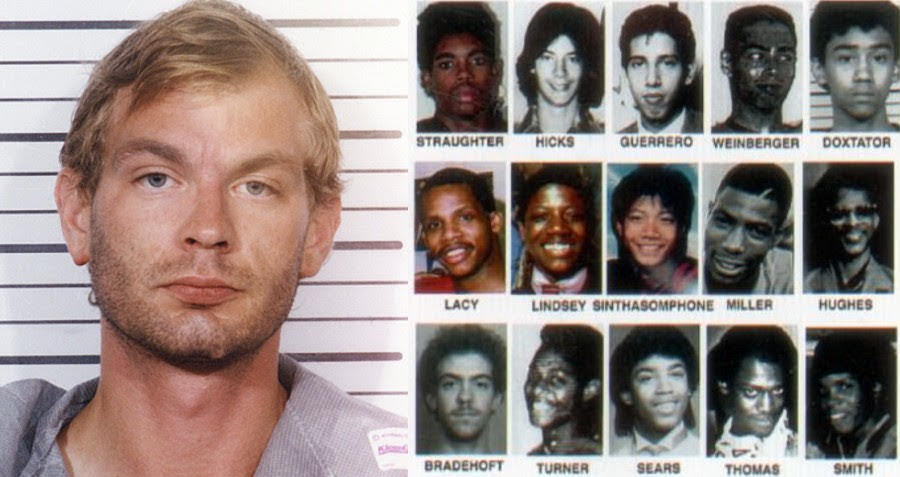 Jeffrey Dahmer’s second murder followed in 1987, and during the next five years, he killed—mostly in Milwaukee, Wisconsin—another 15 boys and young men, who were for the most part poor and African American, Asian, or Latino. Although other serial murderers had claimed far more victims, Dahmer’s crimes were particularly gruesome, involving cannibalism and necrophilia.

In one instance, he severed the head, arms and legs from the victim’s torso and then filleted the bones from the body before cutting the flesh into pieces small enough to handle. He placed the fresh inside plastic garbage bags and wrapped the bones inside a sheet and pounded them into splinters with a sledgehammer. In 1989, Dahmer pleaded guilty to the charges of second-degree sexual assault and of enticing a child for immoral purposes. But, two months after his conviction and two months prior to his sentencing for the sexual assault, Dahmer brutally murdered and severed his fifth victim, a mixed-race 24-year-old aspiring model named Anthony Sears, whom Dahmer met at a gay bar.

In another instance, Jeffrey strangled a victim to death with a leather strap. He then dismembered him, retaining the youth’s skull, hands, and genitals and photographing each stage of the dismemberment process.

A Failed Attempt To Eat Heart And Arrest… 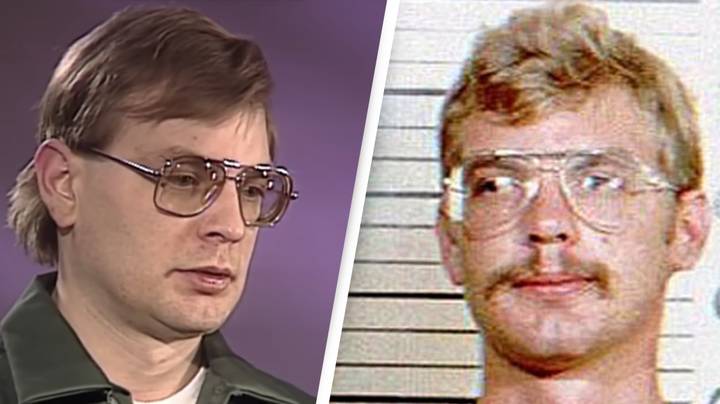 Dahmer was arrested in 1991 when he attacked a victim named Edward. He placed his head on Edwards’ chest, listened to his heartbeat and, with the knife pressed against his intended victim, informed Edwards he intended to eat his heart. However, Edward punched him in the face and ran away from the incident.

Edward lead the police to the apartment where Jeffrey was going to kill him. Jeffrey was finally arrested and after a detailed search, the Milwaukee police’s Criminal Investigation Bureau revealed a total of four severed heads in Dahmer’s kitchen.

Not only this, a total of seven skulls, some painted and some bleached, were found in his bedroom and inside a closet. Investigators also discovered collected blood drippings upon a tray at the bottom of Dahmer’s refrigerator, plus two human hearts, and a portion of arm muscle, each wrapped inside plastic bags on the shelves. In Dahmer’s freezer, investigators discovered an entire torso, plus a bag of human organs and flesh stuck to the ice at the bottom. 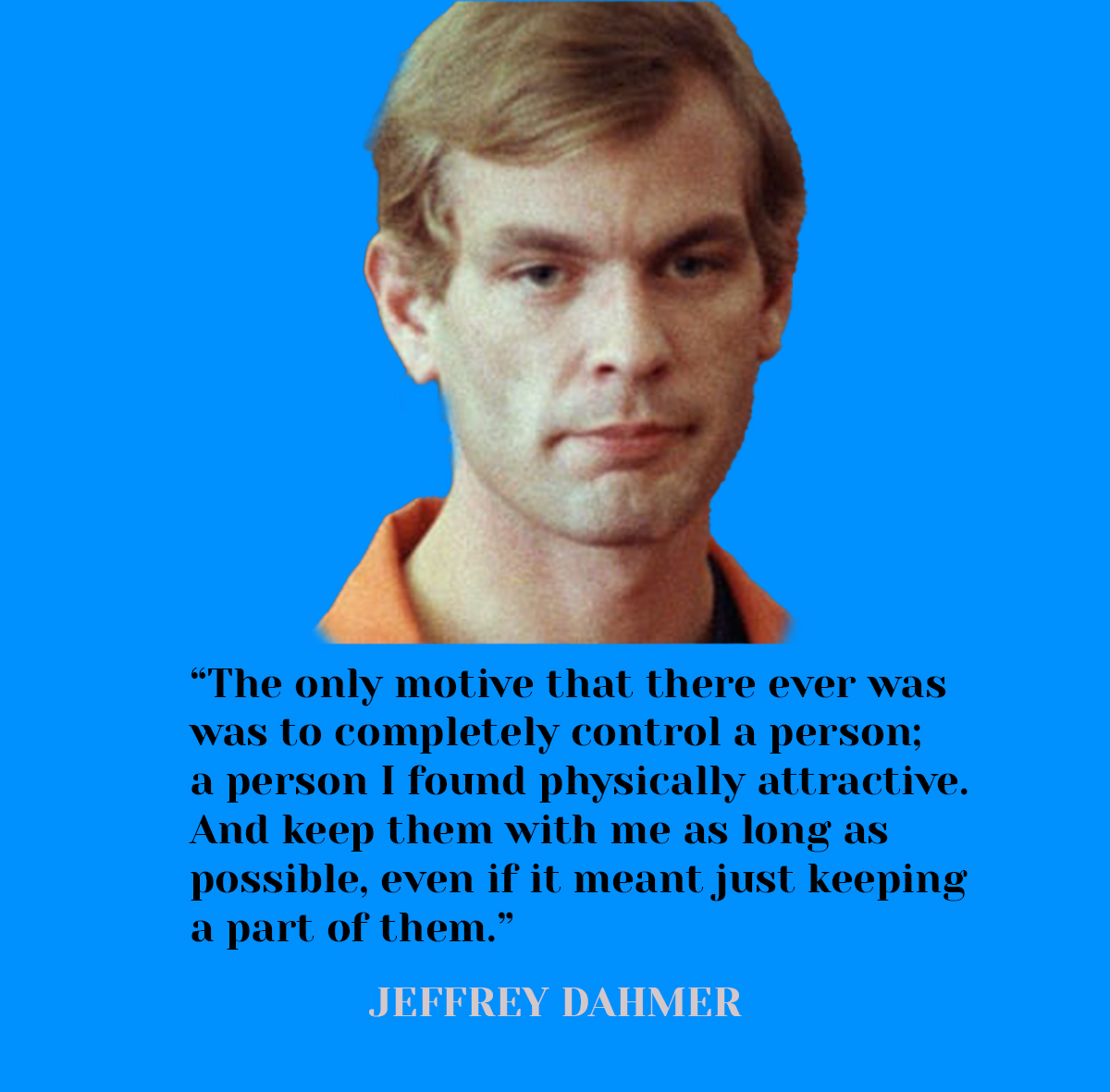 During the interrogation, Dahmer readily admitted to engaging in necrophilia with several of his victims’ bodies, including performing sexual acts with their viscera as he dismembered their bodies in his bathtub. A fond love of preserving dead animals turned him into a monster who started killing, sexually abusing and preserving body parts of his many victims.

Many of Jeffery’s later murders involved cannibalism, necrophilia and permanent preservation of body parts, typically all or part of the skeleton. Even though he was diagnosed with borderline personality disorder, psychotic disorder and schizotypal personality, he was found to be legally sane during the trial. Jeffrey was convicted of fifteen of the sixteen murders he had committed in Wisconsin and was sentenced to fifteen terms of life imprisonment in 1992. Later, his sentence was extended to a sixteenth term of life imprisonment for an additional homicide committed in Ohio in 1978. On November 28, 1994, Dahmer was beaten to death by Christopher Scarver, a fellow inmate at the Columbia Correctional Institution in Portage, Wisconsin. 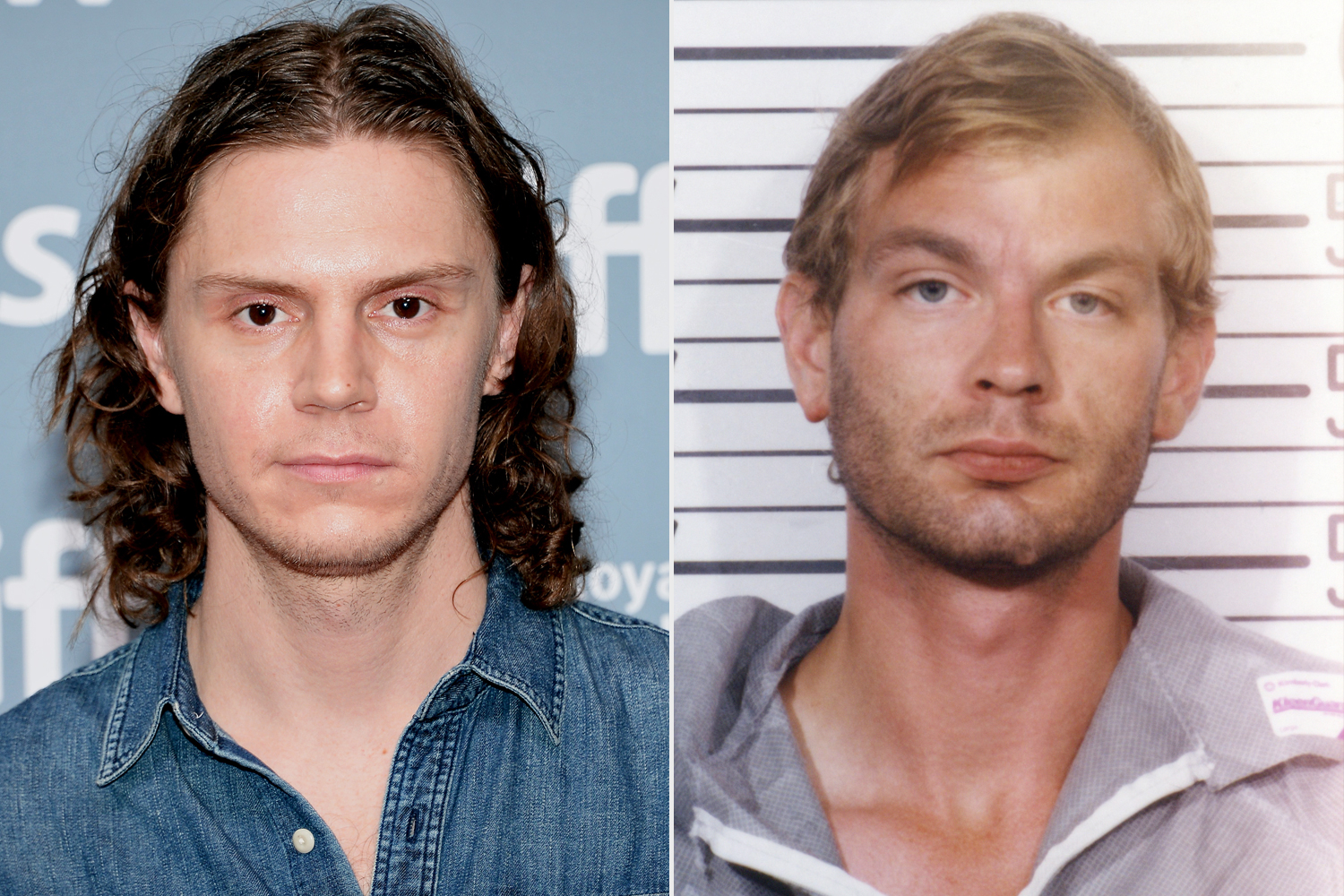 There are more than 14 documentaries and episodes by various news channels like BBC, NBC and ABC News, which cover Jeffrey’s horrific tale of murders. The upcoming Netflix documentary Monster is expected to span the 60s, 70s, and 80s and conclude with Dahmer’s arrest in 1991.

It is also expected to have a more psychological approach than other adaptations of Dahmer’s story. Monster will focus more on how these murders were allowed to happen over so many years. The official logline of Monster: The Jeffrey Dahmer Story states:

“Monster chronicles the story of one of America’s most notorious serial killers, largely told from the point of view of Jeffrey Dahmer’s victims and dives deeply into the police incompetence and apathy that allowed the Wisconsin native to go on a multiyear killing spree. The series dramatizes at least 10 instances where Dahmer was almost apprehended but ultimately let go. The series also is expected to touch on white privilege, as Dahmer, a clean-cut, good-looking white guy, was repeatedly given a free pass by cops as well as by judges who were lenient when he had been charged with petty crime.”

The script for Monster: The Jeffrey Dahmer Story was written by Murphy along with Ian Brennan (Glee, Ratched, Scream Queens) and David McMillan (Lucifer, Sleepy Hollow). The release date hasn’t been announced yet. Feeling the chills down your spine?