Spotted Lanternfly – What to Do About its Spread?

Insects and bugs are vital to our ecosystem, but not all species of insects work in favor of nature. The spotted lanternfly is one of them.

The spotted lanternfly is a planthopper indigenous to parts of China. Over time, it has spread extensively to the countries like South Korea, Japan, and the United States of America. Its host plants include grapes, Malus species, and stone fruits. The invasive species, though, originated in Asia, was firstly found in Pennsylvania in the United States in 2014. It spread to other parts of the country, including Virginia, New York, Connecticut, Delaware, Maryland, and New Jersey. Scientists and researchers have a message for you if you see the spotted lanternfly – SQUISH THE INSECT.

What are Scientists and Researchers Saying about the Spotted Lanternfly?

According to scientists, if you spot this insect, it is better to squish and kill it. It is because they can be devastating to agriculture.

As per the New York City Parks Department, “Harming our city’s wildlife is broadly prohibited, but to slow the spread of this troublesome species, the current guidance remains – if you see a spotted lanternfly, please squish and dispose of this invasive pest.”

This insect feeds on over 70 plants, including grapes, apples, hops, and hardwood trees. It has become a local concern because a spotted lanternfly causes direct damage by sucking the sap from host plants and secreting large amounts of sugar-rich, sticky liquid called honeydew. 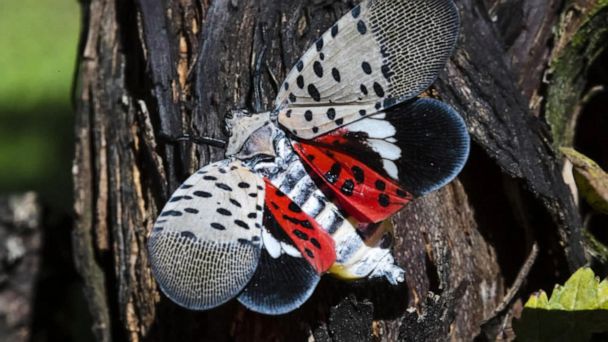 Both honeydew and the resulting black sooty mold may kill the plants and foul surfaces. The former attracts other pests, too, like flies, yellow jackets, and ants, thus affecting outdoor recreation and ruining the crop harvests.

How Do These Flies Spread in the Environment?

They can be found in large numbers in outdoor settings like parks and backyard trees, where they feed on trees and ooze honeydew. The female spotted lanternfly lays between 30 and 50 eggs each between September and October. These eggs hatch in the spring. The baby lanternflies, known as nymphs, emerge completely grown around July.

Where do these Flies Thrive?

According to many studies, a spotted lanternfly thrives in warmer temperatures over colder ones. They need a long growing season to complete their life cycle. Other climatic conditions like early spring and later fall frost also favor their growth and increase the range in which they can survive. 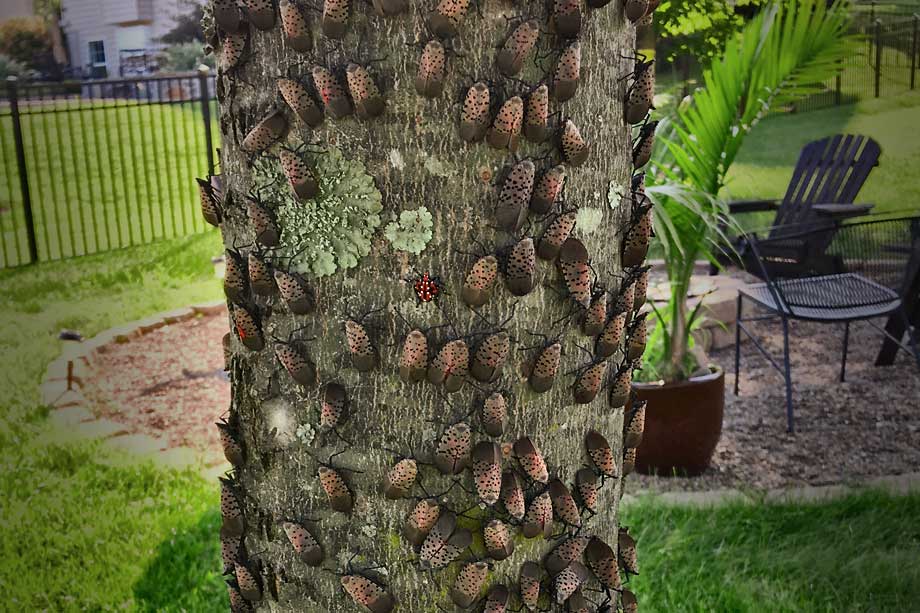 When the temperature becomes warm, their growth and development increase. It makes them actively feed for long periods, causing more damage to the trees and outdoor vegetation.

What Damages does a Spotted Lanternfly Cause?

A spotted lanternfly may look cute and tiny; however, it may cause severe damage to the environment. It includes oozing sap, wilting, leaf curling, and dieback in trees. The insect also affects vines, crops, and other types of plants.

The more secretion of honeydew, the higher growth of the black sooty mold. Although this mold is harmless to animals and human beings, it causes great damage to many plant species.

Many counties were infested and quarantined for spotted lanternflies. Upon their spread in these areas, many residents reported poor quality of life. According to them, they couldn’t go outside or enjoy the outdoors during the spring and summer months. Spotted lanternflies multiply quickly and cover trees. They also swarm in the air.

The Spotted Lanternfly is a Cause of Concern in Pennsylvania

The spotted lanternfly has become a huge cause of concern in Pennsylvania, where it is affecting the quality of life of the residents. Besides this, it is also affecting Pennsylvania’s agricultural industry. The economic impact it has caused in the state could total hundreds of millions of dollars and hundreds of thousands of jobs for those in the apple, grapes, hops, and hardwood industries. The US Department of Agriculture has warned people to kill the pest if they encounter it. It further suggests checking on all the outdoor items for spotted lanternfly eggs. They look like a mass covered with gray wax. If you spot any, scrape them off, put the mass in a plastic zippered bag with hand sanitizer, and throw it out.

You can further deal with their spread by using insecticides approved by the Environmental Protection Agency that can kill these insects without harming the plants and trees they are thriving on.

More Facts and Information about the Spotted Lanternfly

The Life Stages of the Insect

The physical appearance of this insect transforms throughout its life stages as it matures to adulthood. It starts as a nymph, becomes an adult, and starts laying eggs after maturing completely.

As per research, 80-90 percent of egg masses on trees are found 10 feet and above the ground. Freshly laid masses are light gray mud-like covering the eggs. The older eggs change their color and become light tan, and the hatched ones lose their mud-like covering.

Their Waste is Poisonous too

The poop of a spotted lanternfly is poisonous to trees. Their feces attracts a type of mold that slowly weakens and kills the entire plant.

The Insect Jumps More than It Flies

You may have spotted many insects taking a flight over the plant or inside your home. But do you know a spotted lanternfly jumps more than it flies? 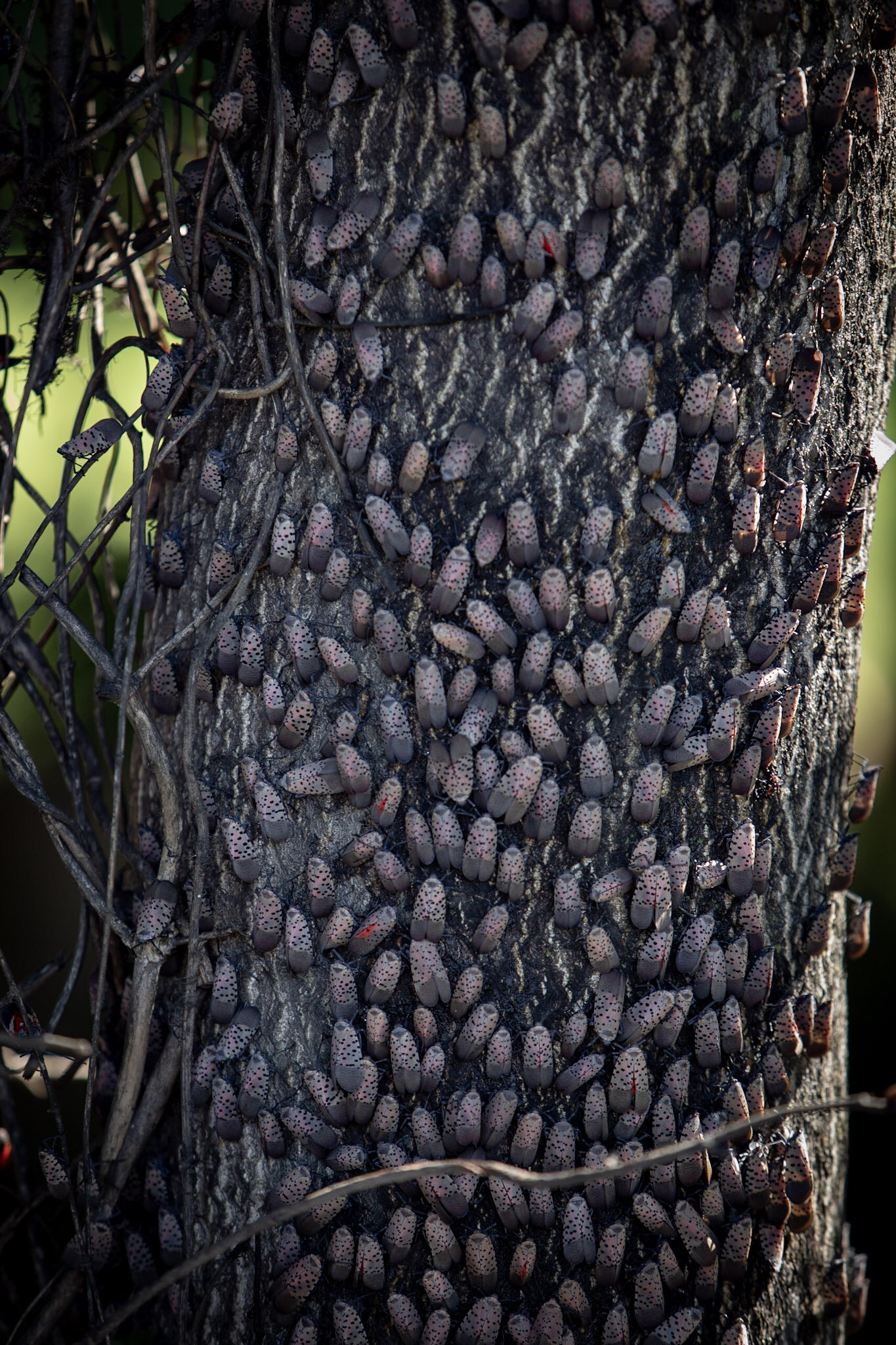 An adult spotted lanternfly is one inch long. It can jump up to three meters. Its wings are usually closed because the insect uses them rarely.

Grapes and Hops are their Favorites

Out of all the flora it feeds on, grapes and hops are its favorite. It means that if you do not destroy a spotted lanternfly, it may ruin your booze. As per the claims of Penn State researchers, if the spread of this insect is not controlled, it may put the $4.8 billion booze industry at risk.

The Insect that Inspired a Movie

A Philly wedding photographer released his own short film documenting the insect. The story revolves around a protagonist whose personal mission is to kill the insect.

Keep in touch for more news and updates.