Trevor Engelson is the ex-husband of Meghan Markle. Before finding her fairytale romance with Prince Harry and becoming a member of the royal family, Meghan was married to her first husband whose name is Trevor Engelson.

Meghan Markle lived a different life before getting married to Prince Harry. Keep scrolling further to know more about the personal and professional life of Meghan Markle’s ex-husband Trevor Engelson. 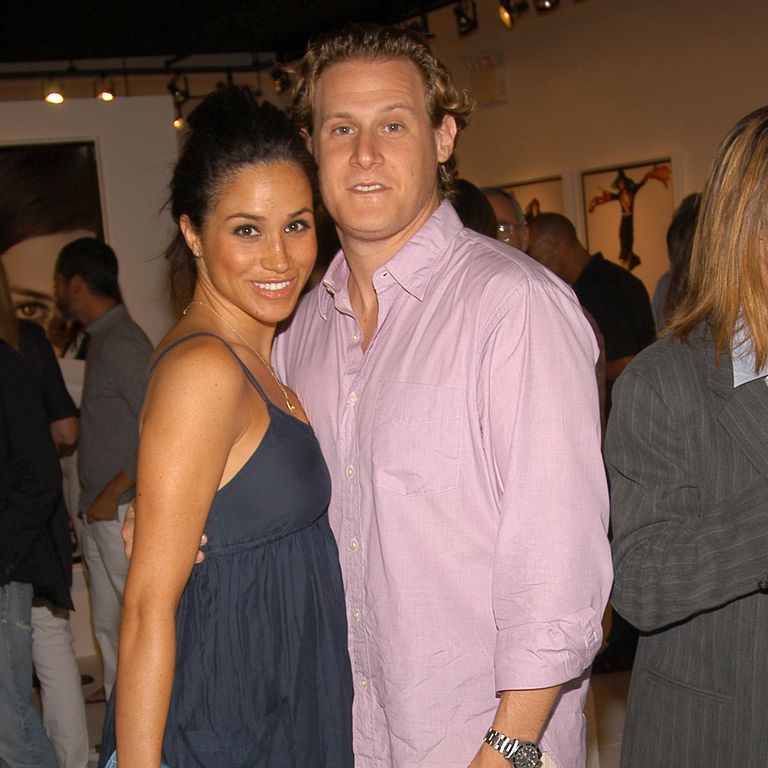 Meghan Markle’s former partner Trevor Engelson was born on October 23, 1976, in Great Neck, New York, United States. Then, he went to John L. Miller Great Neck North High School and after a while, he studied journalism at the University of Southern California in Los Angeles.

Trevor is no stranger to the world of showbiz. After completing his college, he kicked off his career in the entertainment industry as a production assistant before climbing the ladder of success. Later on, he switched to talent management before founding his own production company, Underground, in 2001. What does Trevor Engelson do for a living?

At the moment, Trevor is a film producer by profession. He is most noted for his work in the 9/11 romance movie named Remember Me which came out in the year 2010. It stars Robert Pattinson, Emilie de Ravin, Chris Cooper, Lena Olin, and Pierce Brosnan in pivotal roles.

In addition to this, Engelson is also a manager of screenwriters, actors, novelists, and film directors in Los Angeles, California. Back in the day, he served as the executive producer on US TV shows Heathers and Snowfall. Apart from this, Trevor has also worked on a couple of other movies such as Outpost 37, License to Wed, Amber Alert, Give Me Future, The After Party, Small Engine Repair, and All About Steve.

When did Meghan Markle and Trevor Engelson tie the knot?

The Suits star and the Remember Me producer crossed paths for the first time in the year 2004 and they started dating. The two of them got engaged in 2010 after being together for six years.

Meghan and Trevor exchanged their vows in front of 102 guests on September 10, 2011, at the Jamaica Inn in Ocho Rios, Jamaica. Their wedding was a four-day affair. The snaps from their wedding showed them having a good time. At that point, a source said, “The ceremony was over very quickly, in about 15 minutes. Then everyone hit the dance floor. It seemed they all just wanted to party.”

Why did Trevor Engelson and Meghan Markle get divorced?

Trevor and Meghan pulled the plug on their marriage after almost 2 years of marriage in the year 2013. Their divorce got finalized in 2014. At that time, like most couples, they cited, “irreconcilable differences” as the reason behind their split.

A source told Woman’s Day magazine, that Markle’s role as Rachel Zane in the legal drama television series Suits, was to blame. Then, a source said, “Meghan landed her role in Suits just a few months before they married. And despite being together for six years before getting hitched, things started to fall apart not long after the wedding.” The insider went on to say, that a long-distance relationship didn’t work for Meghan and Trevor. The source further added, “They really battled with long distances. Trevor was based in LA while Meghan was in Toronto, a five-hour flight away. It was a very difficult way to start married life.”

In his new book, Meghan: A Hollywood Princess, royal biographer Andrew Morton spilled the beans on the life of the former Hollywood actress and stated that she posted back her wedding and engagement rings to Trevor after ending their marriage of 2 years “out of the blue”.

Back in June 2018, just a couple of weeks after Meghan Markle and Prince Harry’s wedding, The Sun disclosed that Engelson had proposed to his girlfriend Tracey Kurland. As per various media outlets, then, Trevor had been dating the 31-year-old health and nutrition expert for at least a year.

The answer to the above question is a big yes. In October 2018, it was reported that just like his ex-wife Meghan Markle, Trevor had his own fairytale wedding after marrying an heiress worth $281 million about five months after Meghan tied the knot with Prince Harry.

Trevor and Tracey, daughter of investment trust founder Stanford Kurland walked down the aisle after a year of dating in 2019. According to a report by Daily Mail TV, the two of them got married in a low-key wedding at a private home in exclusive Hidden Hills, California. Then, many guests who attended the wedding of Trevor and his ladylove Tracey shared pictures and videos from their beautiful ceremony on the social media platform Instagram.

In a snap posted on Instagram by a guest, the bride can be seen looking stunning in an off-the-shoulder, midi-length white dress. On the other hand, when we talk about Trevor, he opted for a black tux.

Then, a close pal of Tracey told Fabulous Digital, “Tracey has been a breath of fresh air in Trevor’s life and the two are blissfully in love. The name of Meghan never comes up in conversation when they are around friends and we all get the feeling neither are bothered about what happens in her life.” However, Tracey’s friend also claimed that the newlyweds are “oblivious to what is going on with the Royals”. The close friend of Tracey went on to say, that the California-based nutritionist “has been key in helping him recover” from the split.

Do Tracey Kurland and Trevor Engelson have any kids? Do you think Trevor Engelson and Meghan Markle were not a perfect match for each other?
Kindly let us know your thoughts in the comments section below. Don’t forget to stay tuned with us for the latest updates from the world of showbiz.