Pete Davidson’s Dating History: A Look at All His Ex-Girlfriends

Pete Davidson is a 28-year-old American actor and comedian. He joined the cast of NBC’s Saturday Night Live at the young age of 20 years in 2014. Davidson was a part of the series for eight seasons straight before leaving in 2022. That is where he got most of his fame. He made around $15,000 per episode on SNL. His net worth is said to be over $8 million. Davidson is all set to appear in movies and go on tours apart from doing stand-up comedy. But one of the most significant reasons for him being in the news often has been because of his love interests and dating life. Davidson has dated a string of beautiful and successful ladies including actress, model, and singer.

Davidson’s father was a firefighter who died while in service during the 9/11 attacks. One clip of Jimmy Carr using his father’s death as a joke went viral on the internet. However, he reportedly got permission beforehand from Davidson.

Apart from co-writing, acting and producing in The King of Staten Island, Davidson has also produced the comedy film Big Time Adolescence. The movie The King Of Staten Island is partly based on his life. In the movie, his character’s father is also a firefighter who dies in the line of duty during the 9/11 attack.

The comedian has also appeared in an episode of the famous Brooklyn Nine-Nine and Guy Code. He continued acting and was seen in What Men Want, Angry Birds Movie 2, etc. Davidson is set to appear in the biopic I Slept With Joey Ramone. In the biopic, he will play the role of Joey Ramone of The Ramones.

Davidson is one of the few celebrities who does not hesitate in talking about mental health. He has been pretty open about his physical and mental health struggles. He has talked about being diagnosed with Crohn’s Disease when he was 17 or 18 years old.

Also, he has also talked about being diagnosed with borderline personality disorder and battling depression and anxiety for years.

Here is a breakdown of all the women that Pete Davidson has been with.

Davidson was briefly involved with MTV’s Girl Code comedian and actress in 2015. The two of them did not date for long but seemed to be on good terms even years later. Aquilino was not particularly thrilled when Davidson got engaged to Ariana Grande in 2018. She reportedly posted a screenshot of the news of the engagement along with the caption “I know I’m the 9 billionth person to text you today about this, but… I can’t”.

However, all seems to be well between the two of them now. They starred together in the movie King of Staten Island with Aquilino thanking Pete for the role on Instagram.

A comedian and Larry David’s daughter, Cazzie David and Pete Davidson dated for about two years, from May 2016 to 2018. Davidson went on to confirm that the couple had parted ways during an interview. He said “We’re not together anymore” before adding that she was a “very talented girl” and that she would be fine.

However, David seemed to be taking the breakup pretty hard. In 2020, she released a book of essays titled No One Asked For This. In one of the essays, she said that the breakup caused her mental struggles. She mentioned that Davidson ended their relationship in a text and that she shook uncontrollably in her father’s arms. What made it all worse was that Davidson started seeing Ariana Grande immediately afterward.

One might expect that the two of them are not on good terms. However, David gave her ex-boyfriend Davidson a shoutout in the credits of the book. She wrote “Pete. I love you… Your bravery inspires me and your friendship means the world to me.”

This is perhaps one of the most high-profile relationships that Davidson was a part of, until recently. He apparently started seeing Ariana Grande the next day after breaking up with David. They confirmed their relationship in May 2018.

Davidson was smitten with Grande as he sported two new tattoos for her within 2 weeks of dating. One tattoo was her initials ‘AG’ whereas the other one was her famous bunny ears tattoo behind his ear.

By June 15, the couple was engaged. However, their love did not last long as they called off the engagement in October. Grande famously dissed him in her song called Thank You, Next.

After dating comedians and a singer, actress Kate Beckinsale caught Davidson’s eye. They apparently started dating in April of 2019, although they were spotted flirting back in January. The couple had a 20-year gap between them with Davidson being 25 years old and Beckinsale being 45 years old.

This was not a fling as the couple confirmed their relationship by dating at a New York Rangers game and met Beckinsale’s parents soon after that. 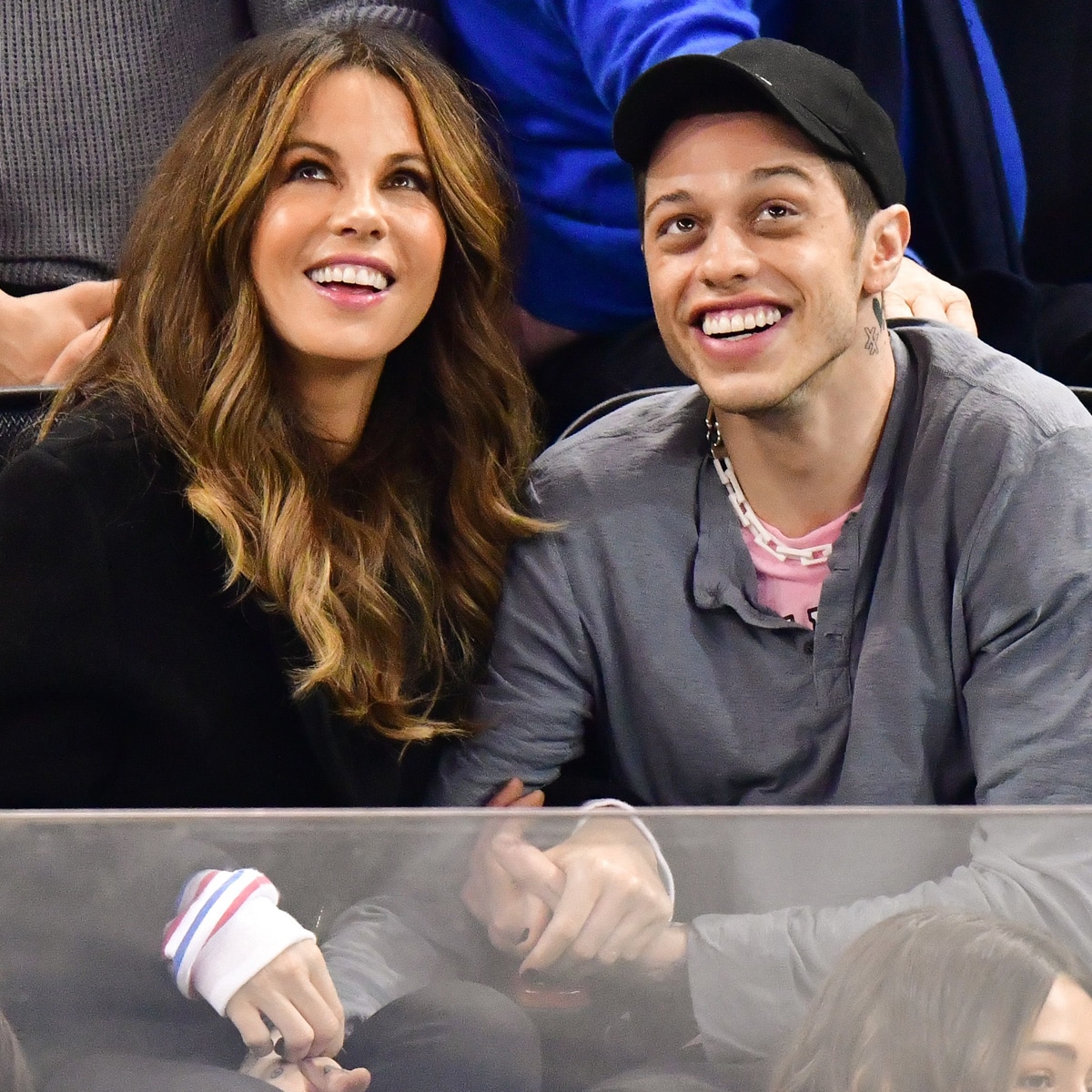 Beckinsale even talked about the relationship in an interview. She said that she had “never dated anybody who comes with their own bag of mischief. It’s all quite shocking, and something to get used to.”

She also went on to say that if she didn’t like the other person as much, she would have “bowed out of the relationship” but that was not a problem as they both liked each other a lot.

The relationship ended quite abruptly in April as the couple called it quits.

Davidson reportedly started seeing Margaret Qualley in August 2019. She is the daughter of Andie MacDowell. The couple were seen holding hands in September.

However, not all was beautiful about the relationship as the two parted ways soon after, in October.

Soon after, Davidson moved on to models and started dating Kaia Gerber, Cindy Crawford’s daughter. This relationship started soon after his previous one ended. The two of them were seen holding hands in November 2019.

The couple ended the relationship in January 2020. Davidson opened up about the relationship in an interview. He said that the two of them dated for a few months and that “she’s very young, and I’m f***ing going through a lot and it was before I went to rehab.”

Davidson was seen holding hands with Phoebe Dynevor in March in Staffordshire. However, the two took their time to come out as a couple in public. They made their relationship official in July by indulging in PDA at a Wimbledon match. 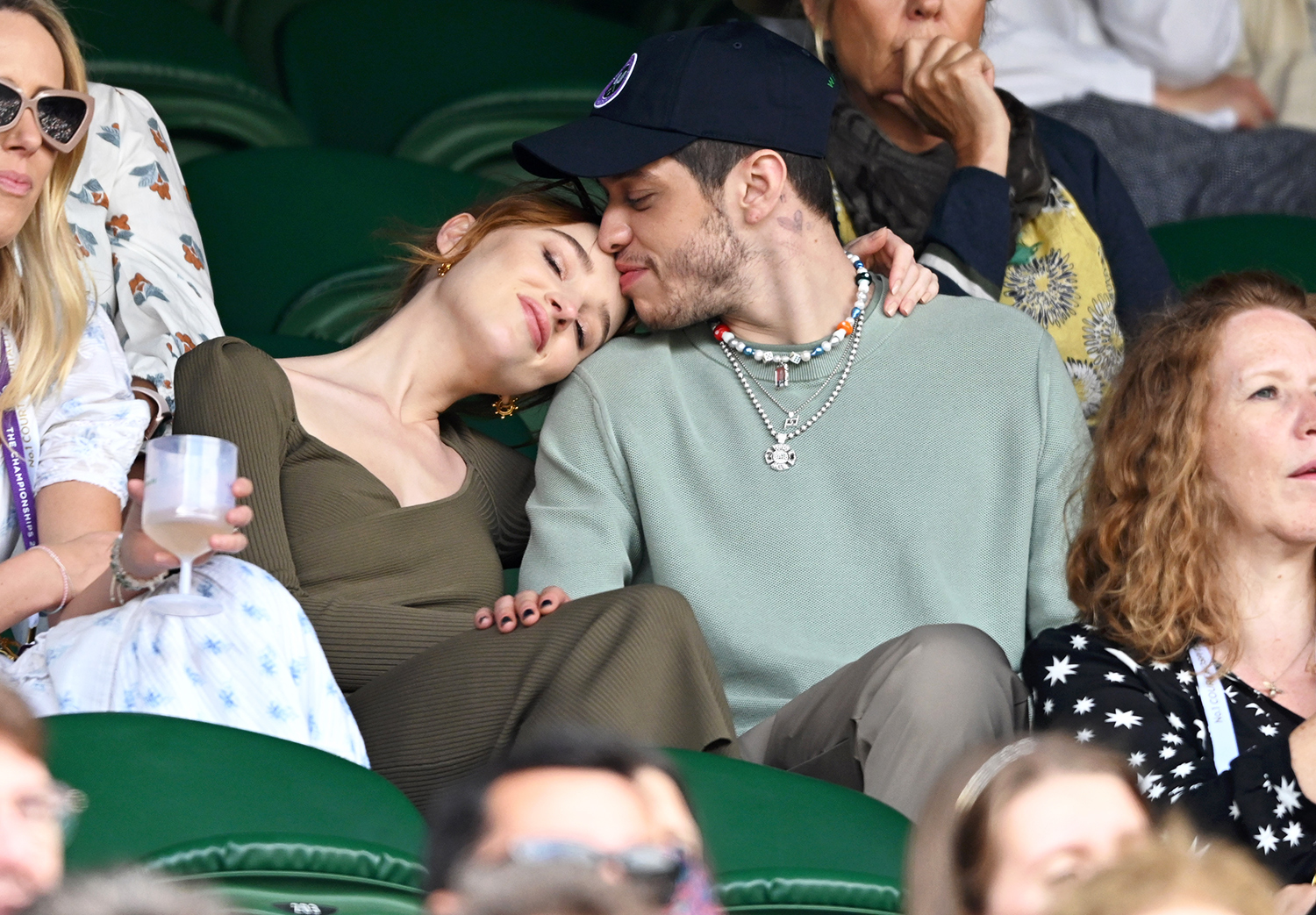 Their relationship was short-lived as they two called it quits in August. An insider told a news outlet that “it was wild while it lasted and they both really care for each other. But the distance has put a strain on them”.

This is a relationship that took a lot of people by surprise. The two of them were reported to be dating while Kardashian was going through a messy divorce.

The reports first emerged when they shared a kiss as Aladin and Jasmine on Saturday Night Live. However, back then they denied any suggestion of being a couple.

The two of them were seen holding hands on a rollercoaster trip at Knott’s Scary Farm in Buena Park, California in November. They seemed to be out on a double date with Travis Baker and Kourtney Kardashian.

They were seen holding hands again while on a boat in the Bahamas to kick off the New Year. Kardashian took her time to announce the relationship in April when she posted a picture of the two of them getting cozy.

The relationship sparked off a lot of speculation and gossip as Kardashian’s ex-husband, Kanye, was not too happy about the relationship and threatened him for coming between a “man and his kids”.

Davidson did respond back by sharing a screenshot of a text he sent Kanye where he said that he would not allow him to treat him treat them like that anymore. He also mentioned how Kardashian was a great mother to Kanye’s kids.

As a tribute to show his love for Kardashian, Davidson has gotten a couple of tattoos. He has an Aladin tattoo to commemorate his role as Aladin on SNL where he first kissed Kardashian.

Davidson also has a KNCSP tattoo, which is guessed to be the initials of Kardashian and her kids. The latest of the many tattoos seems to be the MY GIRL IS A LAWYER tattoo as Kardashian is a certified lawyer.

Davidson has surely dated a string of successful and popular ladies. He has also broken many hearts along the way, yet somehow, he seems to be in a good relationship with most of his exes.

In a 2020 interview, he said that he was sober and was trying to stay away from drugs. He also requested his fans to not drop off the weed at his mother’s house as it almost ruined his sobriety.

It is clear that Davidson is trying to be a better man and a role model. He seems to be stable and happy in the relationship with Kardashian.