What is Half Swipe on Snapchat and Does it Still Work in 2022?

The Half Swipe feature on Snapchat makes reading messages without letting the other person know very convenient. However, Snapchat users are currently talking about it all over social media platforms and wondering if it still works. Read further to know if the Half Swipe trick works even in 2022. 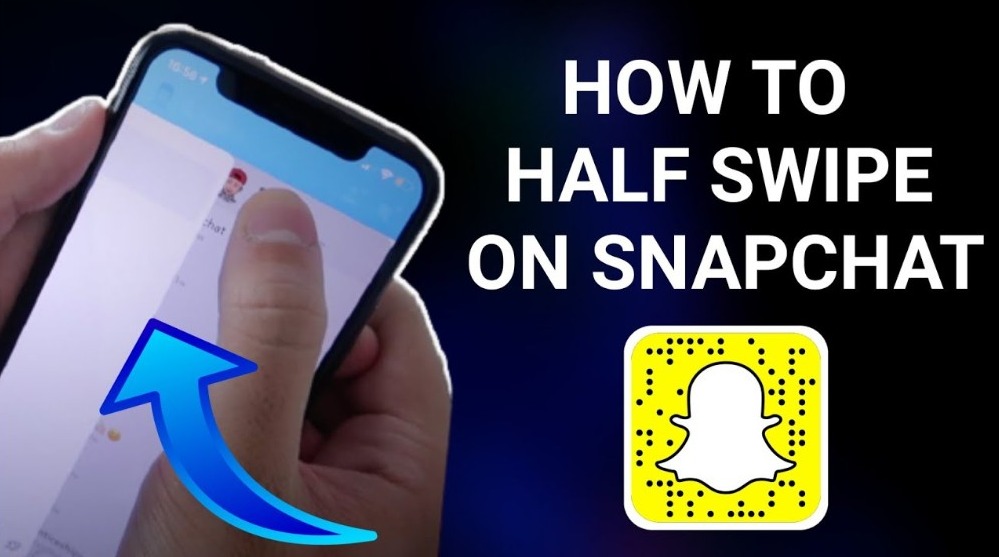 The Half Swipe was an intelligent trick that allowed users to read any message on Snapchat without actually opening it. If you’re an avid Snapchatter, there’s a high probability that you already know about it.

For starters, no it isn’t the feature like you swipe someone on Tinder. Instead, it was a convenient trick that allowed users to read messages without letting the other users know. That’s why Snapchat users always keep it in their discussions.

What is the Half Swipe Feature on Snapchat?

Half Swipe on Snapchat wasn’t an official feature but a trick or workaround that users figured out unintentionally. It later spread like wildfire as it allowed users to view a message without actually opening it and notifying the sender that it had been viewed.

Normally, you must open a message on Snapchat to read it as you can’t see it from notifications. Snapchat notifies users by displaying “Opened” when you view a message. The messages also disappear upon viewing or after 24 hours depending on your settings.

However, the Half Swipe feature helped the users to read the message without Snapchat telling the sender, and since the message isn’t opened, it won’t disappear. That’s why the trick became a must-know for Snapchat users.

How to do the Half Swipe trick on Snapchat?

The Half Swipe is an intelligent trick that Snapchat users figured out on their own. When you half swipe a message on the app, you can read what’s inside without opening it. It’s like reading a letter without tearing the seal of the envelope.

To do the Half Swipe trick on Snapchat, first launch the app and go to the “Messages” tab by tapping on its icon.

Now locate the chat that you want to view without opening it. Now press and hold the user’s Bitmoji present on the left and slowly drag your finger toward the right side of the screen. Make sure you don’t lift your finger from the screen.

Once you’ve previewed the message, just drag your finger back to the left side. This way, you’ll know what the message says but the other user won’t know that you’ve opened it.

Does the Half Swipe trick still work on Snapchat in 2022?

No, the Half Swipe trick doesn’t work anymore on Snapchat. If you’re reading this in 2022, then you can’t try the Half Swipe feature to preview any Snapchat message. As a matter of fact, Snapchat removed the feature (fixed the bug) in June 2021.

However, users didn’t realize it as of late due to not knowing about it. Many users have just got to know that the trick doesn’t work anymore and they are revealing their disappointment on Twitter, Reddit, and other social media platforms.

Many of them are even calling for Snapchat to introduce it as an official feature. That’s unlikely to happen anytime soon.

Update: The Half Swipe trick is working on Snapchat once again but it’s not the same anymore. Snapchat is sending notifications to the sender when you preview a message upon Half Swiping.

SNAPCHAT SENDS A NOTIFICATION WHEN YOU HALF SWIPE NOW

Why did Snapchat remove Half Swipe?

Snapchat removed the Half Swipe trick as part of their regular updates to fix existing bugs and glitches. Since the trick wasn’t an official feature and just a glitch figured out by users, it got removed from the app.

Snakes trying to swipe on Snapchat messages to read them without opening them but Snapchat have finally patched it pic.twitter.com/ePkJQOivat

It continued to work until Snapchat didn’t acknowledge it. It’s possible that the trick would’ve still been working if it didn’t go viral. For now, you can only miss it and pray that it returns sometime soon.

Wish you could half-swipe Snapchat pictures

Are there any chances that Snapchat will re-introduce it?

Half Swipe wasn’t an official Snapchat feature, so it’s highly unlikely that it would re-introduce it. It was basically just a bug that users were exploiting. Thus, Snapchat fixed it with a patch. You can’t use the workaround anymore.

Currently, there’s no way available on Snapchat that allows users to view messages without opening them. Whereas, WhatsApp, Instagram, and other similar apps have an option where you can read messages without letting the senders know.

For now, we can’t predict what the future holds for Snapchat. They are not trying any such features, so it won’t be available anytime soon.

Do you think Snapchat’s decision to remove Half Swipe was wise or bad? Tell us your reactions in the comments.