Twitter Blue is a subscription-based monthly service by the microblogging site offering premium features to subscribers. After Elon Musk landed a deal to buy Twitter for roughly $44 billion in cash, more and more people are shifting their attention to this monthly membership. 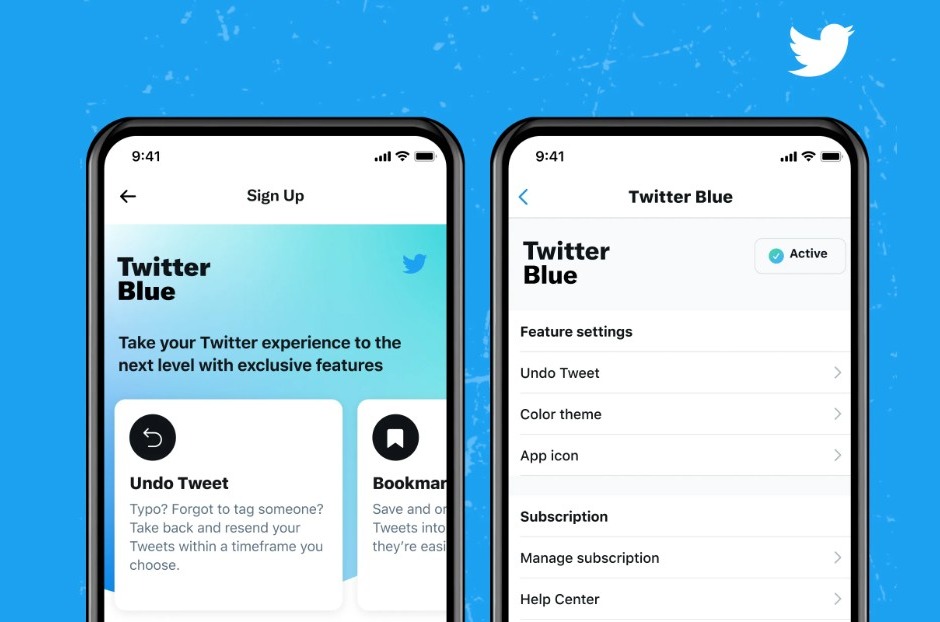 But, what is it and what does it do? Is it worth spending your money on? Find out here as we explain what Twitter Blue is, where is it available, and what features it offers to the subscribers in this post.

The said service launched in June last year, and its global rollout is still awaited. Currently, it is only available in a limited number of countries including the United States. The users can unlock a set of additional features by buying the subscription service.

Twitter Blue is an optional, monthly, subscription-based service on Twitter that offers exclusive access to premium features allowing you to take your experience on the platform to a whole different level.

The service launched on June 3, 2021, and is currently available for Twitter users in the US, Canada, Australia, and New Zealand. The key features it offers include an ability to undo tweets, read news articles ad-free, customize the Twitter icon, and more.

That little icon at the top? It means you’re using a Twitter Blue feature, such as Top Articles or Reader! pic.twitter.com/vrjdO8ao11

However, some of the features Twitter Blue offers are limited to certain platforms. For instance, the service allows only iOS users to customize their navigation by adding or removing items from the bottom navigation bar.

Twitter Blue unlocks access to a collection of additional features that allow users to customize their experience on the platform. Here is a list of features that become available when you buy the Twitter Blue subscription:

Twitter Blue offers an additional ability to undo their Tweets if they make a typing error, forget to tag someone, or make a mistake. The feature is turned on by default and users can set a customizable time of up to 30 seconds to click “Undo” before the Tweet, Reply, or Thread becomes available on the timeline.

Twitter Blue subscribers get the feature known as Bookmark Folders that allows organizing the Tweets they’ve saved in a better manner. So, they can easily find it whenever required. Twitter offers multiple ways in which you can save a Bookmark Folder, and it is always private. 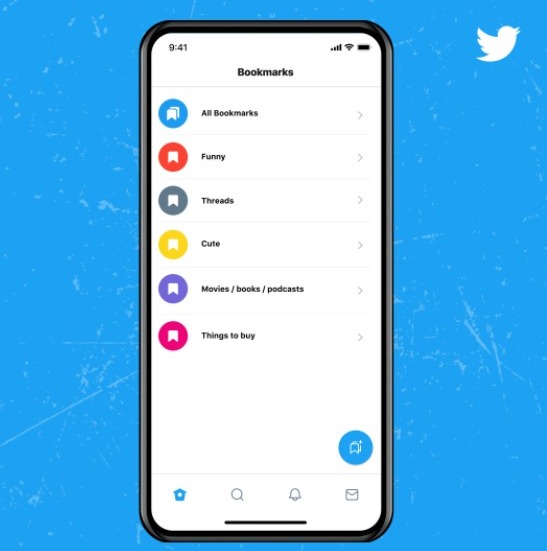 You can tap on the share icon on a tweet, choose the option “Add Tweet to Bookmarks,” and then tap on the “Add to Folder” button. Whereas, you can also manually create a Bookmark Folder from your profile and add Tweets to it.

Twitter Blue subscribers also get the Reader Mode that allows reading long-form content on the platform in a more enjoyable manner. This feature turns the long threads on Twitter into easy-to-read text, so you can read everything seamlessly. 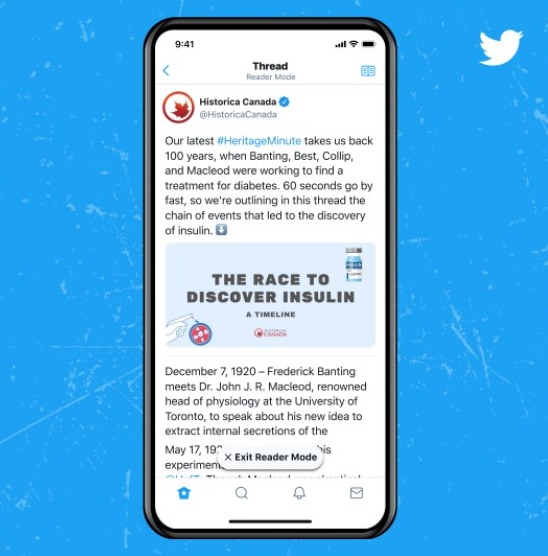 You simply need to tap on the “View thread in Reader” button at the bottom of an individual tweet in a Thread. This feature even allows you to customize the text size to make your reading experience even better.

Twitter Blue doesn’t make your experience on the platform completely ad-free. You will still find ads even after paying for the subscription. However, you can enjoy ad-free articles from an ad-free site within the Twitter Blue Publishers Network.

the wait is over, Android – 🗣 Ad-free Articles have launched on Twitter Blue! 🎉

Remember that the Ad-free Articles feature only includes US-based publishers as of now. Also, they do not offer access to the content of the sites that require a separate subscription.

The Labs feature allows Twitter Blue subscribers to get early access to features that are currently in the testing phase. The users can try them before anyone else. These features keep changing over time, some of them are launched publically, while others get removed.

now that everyone is asking…

yes, we’ve been working on an edit feature since last year!

no, we didn’t get the idea from a poll 😉

we're kicking off testing within @TwitterBlue Labs in the coming months to learn what works, what doesn’t, and what’s possible.

Currently, there is a Labs feature that allows Twitter Blue subscribers to post up to 10-minute long videos on Twitter. The process to post the video is just the same and only the limit of the length increases.

time for a refresh, lots to celebrate pic.twitter.com/KdNq6w3hue

There are several colors available to adjust the theme as well. You can alter both the icon and the theme from the “Profile” menu under the settings.

what's your theme? we love a good purple moment pic.twitter.com/uXzolKY7d0

Users on iOS devices can also customize the application interface. They can choose and save at least 2 and up to 6 items for the bottom navigation bar in the Twitter iOS app.

What is the Price of the Twitter Blue Subscription? 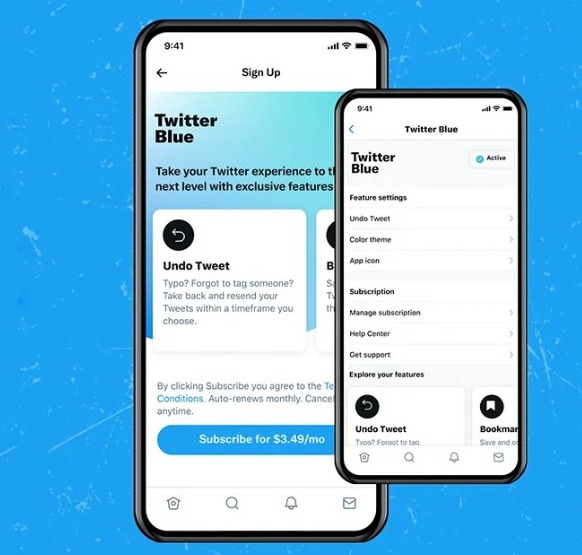 In these regions, the subscription is available for in-app purchases on the apps, and you can also buy it on Twitter.com via Stripe, the official payment partner for the service.

Twitter Blue is completely optional and unlocks a set of additional features for a minimal price of around $3 per month. Some of those features like the ability to undo tweets, read long threads in reader mode, and early access to features in Labs are incredible.

However, the answer to “Is Twitter Blue worth it” varies from user to user. It is true that the subscription doesn’t offer any groundbreaking features that every user should pay for, and it doesn’t even make the experience on the platform completely ad-free, like YouTube Premium.

I had a bunch of Apple Cash just sitting there unused because I don’t play mobile games so I decided to use it on Twitter Blue to see what it was like. Gotta say, the 60 second delay between hitting tweet and it actually tweeting alone is worth it. pic.twitter.com/tzJv6NV1ze

Unless someone else is paying for it, it ain't worth it.

Legit convo I just had:

Jon: LOOK! *shows me his custom pink seasonal Twitter icon* Isn’t it cool?!
Me: How’d you do that?
Jon: It’s Twitter blue! You can change your icon, undo tweets, and that’s about it, you should get it too!
Me: Is it worth it?
Jon: No
Me:*gets it* 🤦🏼‍♀️ pic.twitter.com/4fIbFDXDxd

Thus, the subscription doesn’t make sense for most of the users, and they get double thoughts when someone asks them to buy it. However, users who are super-dedicated to Twitter, tweet a lot and rely on the platform for their work, find it worthy enough to pay for it.

If you are very active on Twitter and want to get an enhanced experience on the platform, you can spend 3 bucks and try it out. But, if you rarely use the app or use it only for about 10 to 15 minutes a day, you would find the service of no use.

Twitter Blue is not for everyone, in my opinion. It is only useful for a limited category of users who are very active on the platform. If you tweet a lot, read every news on Twitter, and want to try out new features coming to the platform at the earliest, you can buy Twitter Blue.

However, if you are not very active on the platform, and only scroll it casually to know what’s going on around you, or in the world, then you are better off without spending your money on it.

What do think? Is Twitter Blue worth it for you? Let us know in the comments section, and don’t forget to share the reason.