Insta360 has launched the successor to Insta360 One R, and the latest modular action camera by the Chinese company is amazing. Check out the brief Insta360 One RS review to decide if you should buy it, and which edition would be perfect for you. 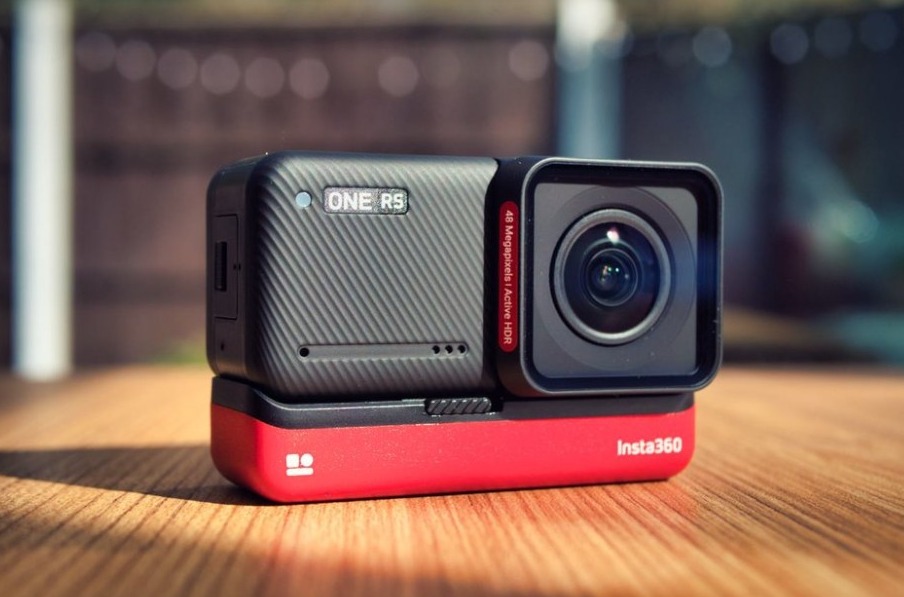 Insta360 is globally popular for its 360 cameras, and the One R combined the feature into an action camera that allowed users to go anywhere and do anything. The new One RS is the first hardware upgrade in the series and builds on the same core.

The OneRS has worked on the shortcomings of its predecessor and solved them efficiently. However, it’ll be interesting to see if it is able to compete with the industry leader Go Pro series of action cameras.

If you are interested in buying an all-in-one action camera that lets you stretch the shooting capabilities and works everywhere, you must consider this brilliant option.

Insta360 One RS Specs and Design

The Insta360 One RS packs powerful specs in a compact but a bit bulkier design. It consists of three main parts- the core, the camera lens, and the battery base. The core hosts an unidentified processor, a 1.5-inch screen, microphone, microSD card slot, and a USB-C port.

There are three options for the camera lens which include a 4K wide-angle action lens called the 4K Boost lens, a 360 lens having two 5.7K fisheye lenses each with 180-degree FoV, and a Leica-branded wide-angle 1-inch sensor that takes in more light and is superior to the 4K Boost lens. 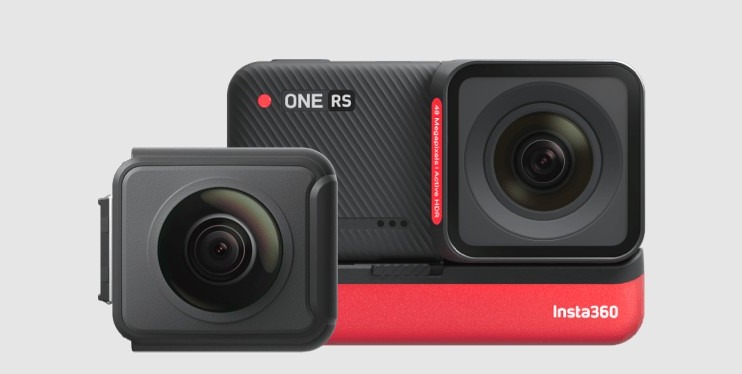 The 4K Boost lens is capable of shooting an equivalent 16mm focal length. There is a 1,445 mAh battery in the base. All of the parts are sold separately as well as in packages that are based on one or a combination of lenses.

The parts of the One RS connect via pin slots and one can easily set the action camera up. The design is sturdy and is rated IPX8 for protection against water and dust. You can use it up to 16 feet underwater.

Here are the full specs of the new Insta360 One RS action plus 360-degree camera:

How is the Build Quality and Performance?

It features two physical buttons for power and shutter, slots of USB-C, and a MicroSD card. The good thing is that both the slots are covered with a flap to protect against water and dust. There is also a 1.5-inch LCD screen that supports touch and swipes. 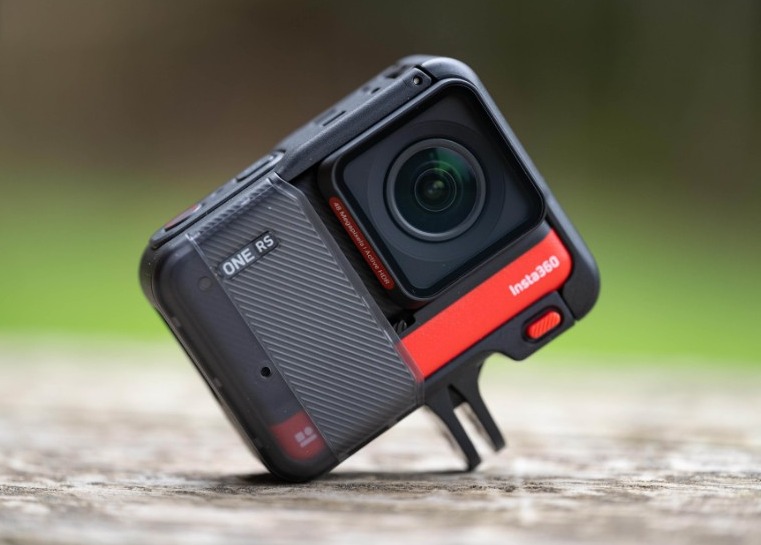 You can directly control the camera with the touchscreen or the Insta360 Companion app on your device. The design feels sturdy and solid for the price you are paying, and the quality specs make up for impressive performance.

The 4K Boost lens is able to capture 48MP still photos or record video up to 4K/60fps under normal mode. It is also capable of recording video up to 6K/24fps in the ultra-wide-screen mode. Whereas, the 360 Lens can record 360-degree video up to 5.7K at 30fps, or a lower resolution at up to 100fps.

The battery backup of the Insta360 One RS is great. You can shoot for around 70 minutes on a single charge. It takes only around an hour to charge up fully with the USB-C port. There is also a dual-battery fast charger available that can fully charge the camera in only 30 minutes. 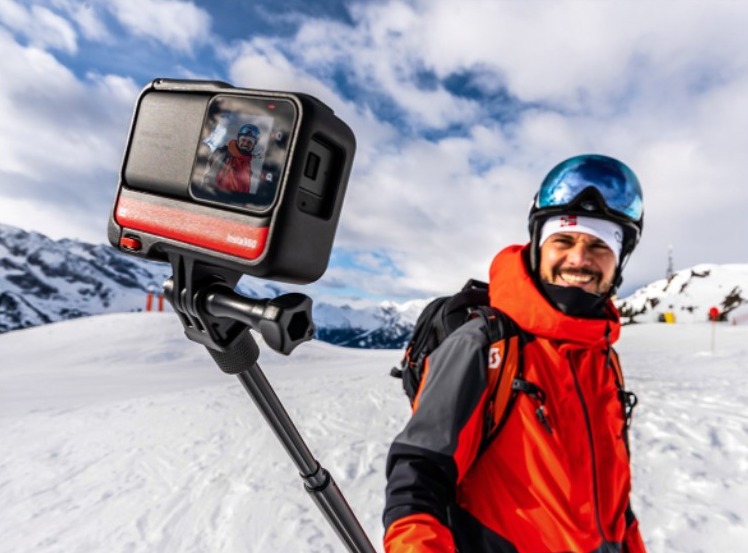 Insta360 One RS Software and Apps

Software and apps are the key differentiators for Insta360 One RS as it features them for Android, iOS, Windows, and Mac altogether. The mobile versions of the app are easier to use and more responsive. However, you’ll have to use the desktop versions to render 6K wide-screen footage.

You can connect the mobile apps wirelessly to the One RS with just a few taps. The iOS version will load and connect much faster. Both versions of the app have the same interface though.

You can directly see the camera’s viewfinder on the mobile screen, control the camera directly, and make edits to the available footage. The app allows you to trim the clip, switch aspect ratio, and render it to the phone’s storage. In addition, you can also add beautiful filters and adjust aspects of the footage. 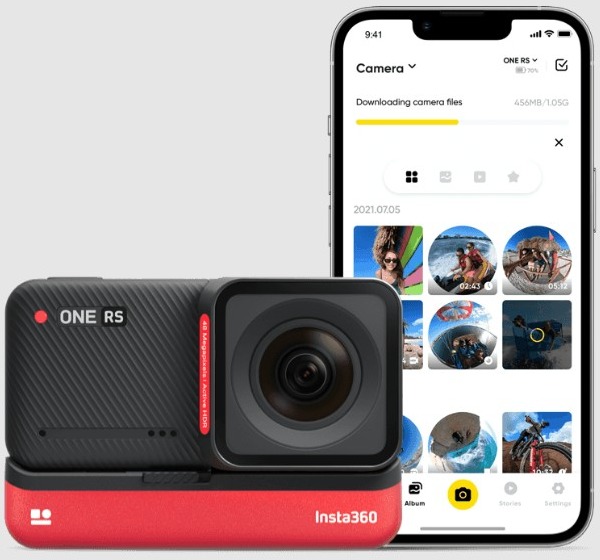 Pros and Cons of InstaOne 360 RS

Take a look at the pros and cons of the Insta360 One RS to understand it better:

The moment Jeremy gave me one of the onboard camera’s that flew off after Charle’s crash. Found in between the barriers at Rascasse by the Marshall’s. One little scratch on the cage but somehow the both lenses are intact 💪🏻 Solid camera @insta360 One RS ! pic.twitter.com/Y80FB8mm3a

Insta360 One RS Price and Availability

Insta360 One RS is available in multiple editions but you can also buy the pieces separately on the official website. The most popular package is the “Twin Edition” which the Chinese company advertises as “more than just an action camera” and is available for $549.

The package includes the core, battery base, both 4K action lens and 360 camera lenses, and a mounting bracket. The next edition that includes all of these except for the 360-degree camera lenses is available for $299, and it is called the “4K Edition.” 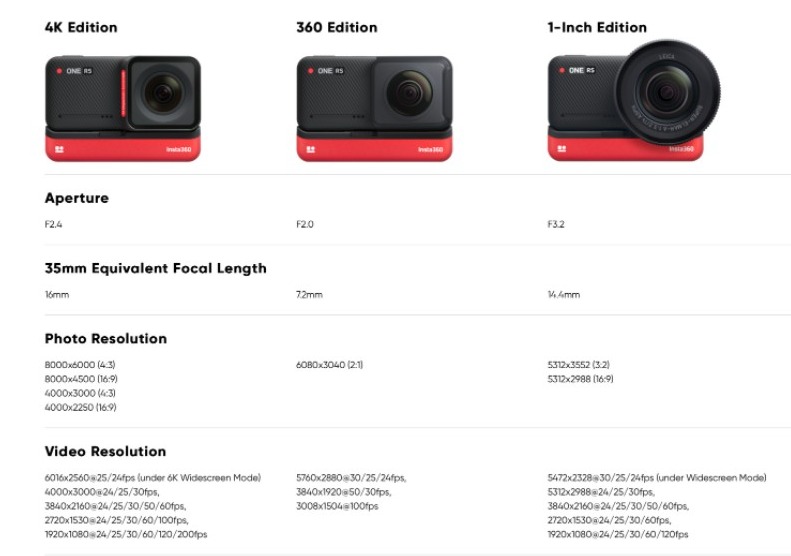 There’s another edition costing $549 called the “1-Inch Edition” that includes the core, battery base, and a Leica-branded action lens with a 1-Inch sensor. All of these packages are available on the official Insta360 website and Amazon globally.

Final Verdict: Should you buy Insta360 One RS?

Yes, Insta360 One RS is worth buying if you are looking for an affordable and capable action camera to keep in your pocket while traveling. If you have the budget, the Twin Edition is the perfect variant that you can go for. It not only serves the 4K recording abilities but also brings the wonders of a 360-degree camera.

The One RS features a cube-like shape and can stand upright on surfaces on its own. You can also pair it with a mounting bracket that is included in the Twin Edition package. You can slide the camera in and out with the press of a button.

When compared to the latest GoPro Hero 10 and Osmo Action 2, you may find the One RS lacking certain capabilities such as the 4K recording at 120fps, a bigger touch screen, and comparatively less stabilization.

However, you can ignore the limitations and proceed with buying. You wouldn’t regret it. It is suitable for traveling, vlogging, or simply for your morning rides. What do you think about it? Share your thoughts in the comments section.