Google Search Crashes When Asked “How Many Emojis on iOS” 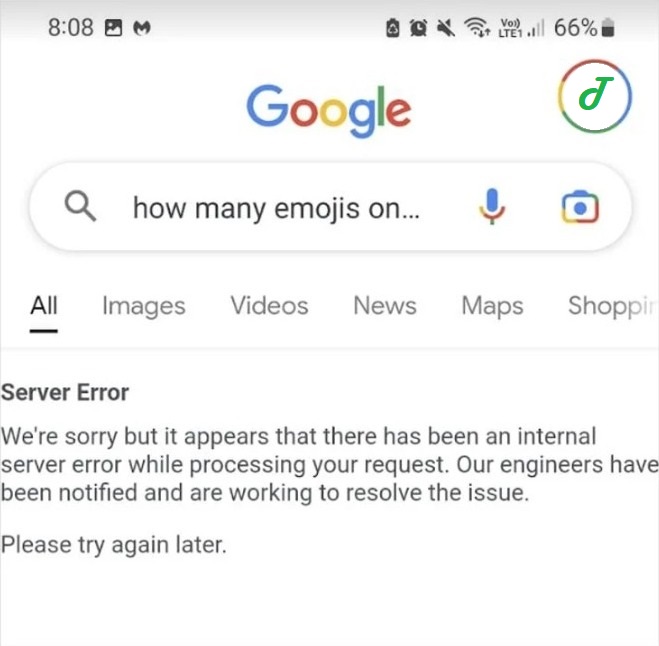 The reports about the issue with Google started emerging yesterday. Our team at “TheTealMango.com” tried verifying if they were true. Surprisingly, it’s real and Google search actually crashes when you ask How many emojis are on Apple or iOS.

When we tried searching the same terms on Google, the page crashed on both the website and mobile app. There was a server error when looking up for these terms despite having a stable network connection. However, this issue seems to be specific to certain regions.

When we tried the same searches after connecting to servers in London and Berlin through a VPN, the results were different. The page didn’t crash and we got the usual search results that we expect after searching for something on Google.

A “Server error” on Google is an instance when the search engine doesn’t respond with the results and displays a page informing about the crash instead. Downtime on Google is pretty rare as August 8, 2022, was the latest date when Google Search was down.

However, netizens have figured out certain phrases that make Google search crash instantly when you enter them into the search bar. You can try it as users having fun crashing Google and sharing the screenshots on social media right now.

How to crash @Google?

Note: You have to search the terms without quotes (” “).

The issue was initially believed to be impacting a country-specific domain, Google.co.nz, when reported by another YCombinator Hacker News user wfme.

Google Search Crashes When You Ask How Many Emojis on Apple: What’s the Cause?

Reddit user gottago_gottago states the culprit behind this incident is “Emojipedia.com” as when you enter the domain name directly on Google, it makes the search engine crash. The exact cause is not confirmed at the time of writing.

Google is likely working on a fix and it will be rolled out soon. We’re trying to reach out to their spokesperson to get a statement on the situation. Stay tuned as we’ll keep you posted with the latest developments.

Did you try it yet?