Dall-E Mini Too Much Traffic Error: How to Fix it?

Ever since the AI Image Generator Dall-E Mini went viral, thousands of users are creating hilarious masterpieces every day. This has put an extensive load on the servers and it has resulted in an issue. Users are encountering the “Too much traffic” error on Dall-E Mini, find out how to fix it easily. 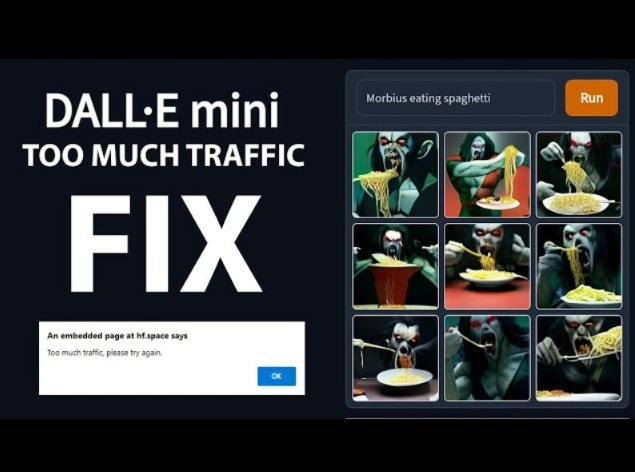 Social media users globally are vastly using the tool to create absolutely hysterical pictures like a Pikachu merged with a Pug, Among Us cave painting, a cobbler delivering newspaper, and much more.

If you’ve recently come across memes on Twitter or Reddit which seem to be a failed take on art, then it’s probably generated using Dall-E Mini.

What is the Too Much Traffic Error on Dall-E Mini?

Dall-E Mini has become a viral sensation now, and its viral memes are attracting more and more users to the website. Using the tool requires zero skill. You just have to load the website, type the text about the image that you want to generate in the given box, and then hit “Run.”

The program then analyzes millions of existing pictures on the internet and tries to associate the picture with the entered text. It serves the result in the form of AI-generated images. This ease of use has attracted hundreds of thousands of users.

However, this extensive user base has resulted in the “Too much traffic” error on Dall-E Mini. This issue appears when there’s too much load on the website servers and the program can’t take any more requests.

Thus, it simply shows the error message, “Too much traffic, please try again.” After that, you’ll have to wait for some time before you can use the tool to generate an image.

What causes this issue on Dall-E Mini?

Dall-E Mini is an online tool that uses AI to generate images based on your text input. It requires a good amount of server bandwidth to complete the process. When too many users are running the program at the same time, the servers start malfunctioning due to overload.

DALL·E mini: Too much traffic, please try again.
Me: That gives me an idea…
DALL·E mini: pic.twitter.com/6M0ywCnjx5

This results in the “Too much traffic” error on Dall-E Mini. When this happens, the program is not able to take your request and you won’t be able to generate the images using AI. That’s why it’s essential to fix this error.

How to Fix Too Much Traffic Error on Dall-E Mini?

The general method to fix the “Too much traffic” issue on Dall-E Mini isn’t complex but very simple and straightforward. When the error pops up, just stay on the webpage and don’t close or refresh it.

Just close the “Too much traffic, please try again” message and instantly hit the “Run” button to generate your masterpiece. Keep repeating the procedure multiple times and the website will soon start generating images based on your input.

The Dall-E Mini website has a very short period of time where it stays too busy. So, you don’t have to wait for hours in order to generate the image. Just stay on the webpage and continue trying to run the program and it’ll eventually start.

This is currently the most effective solution for this error on Dall-E Mini, and it’s your best resort until developers roll out an official fix. For now, they’ve acknowledged the issue and currently working on it.

Alternate Method: Use Dall-E Mini at a Different Time

Another method you can try is to use Dall-E Mini at a different time, possibly when other users are less active (at late night or early morning). During that time, Dall-E Mini will likely be processing a comparatively lesser number of requests.

So, you will not encounter the “Too much traffic” error on the program. You can easily use the viral AI-based Image Generator to create your next masterpiece.

i finally accessed dall e mini without it having too much traffic pic.twitter.com/MZ9REAOMMb

If you’re still not able to use Dall-E Mini without any issues, then the best option would be to wait for developers to resolve the issue with their servers. After that, you will not experience any problems while creating art using Dall-E Mini.

Have fun. If it says too much traffic, keep trying. It takes a bit for it to make images.

The developers have currently acknowledged the error as many people have posted about it on Twitter and other social media platforms. They’ll apparently roll out an official fix soon possibly expanding the capacity of the servers.

We will keep you updated about it. Make sure you keep visiting us frequently. Do you any other workaround for this nagging error? Feel free to share it with us in the comments section.