If you are a student of computer science, then you must have got a coding project for making apps or websites. For that, you need a platform to write your codes on. Such platforms are called Text Editors. Whether a professional coder or a beginner, you need a good text editor.

For that purpose, there are several text editors available in the market. To save you time, we have made a list of the top 12 text editors. You can check each and then download the one that suits you best.

Why do you Need a Text Editor?

Who needs a good text editor? Anyone whose work requires them to interact with text files. This comprises the occasional user who needs a simple editing tool and the regular professional who relies on software like this in their work. Use a text editor for things like:

Some text editors were explicitly made for one or more of these purposes. One feature of a text editor for app developers may be a debugger, while one for web developers could be a live preview window. Nonetheless, most text editors are adaptable enough to serve a wide range of requirements.

Since text editors can be customized in ways other apps can’t, they have broad appeal. But many people would instead use something specialized to their specific needs, such as an IDE (Integrated Development Environment) for programming or a word processor like Scrivener or Ulysses for writing.

Since you seem interested in text editors, we have compiled a list of the best text editors in the market.

Here’s a list of the top 12 best text editors you can try. Each text editor has its own set of features, so you have to check which one suits you.

Sublime Text is one of the most well-known Mac text editors, and it has got its first place for the right reasons. The software has many benefits, such as syntax highlighting and folding, extensive personalization options, a user-friendly layout, a wide variety of options, and a robust ecosystem of APIs and packages. The “Goto Anything” function is a highlight of Sublime Text 3. You can use the keyboard shortcut ⌘P to activate this feature, which does precisely what its name implies by allowing you to quickly navigate to the specific symbols, lines, or sentences that you need.

One of the greatest and most powerful text editors is Sublime Text, and it has features like batch editing, instant project switching, instant Goto Definition, and split editing. The price of Sublime Text 3 is likely its only real disadvantage. Sublime Text 3 is priced similarly to other high-quality Mac applications. However, since a text editor will serve as the backbone of your future projects, it’s not a bad idea to spend money on one now. So, if money is no issue, you should definitely try it out. 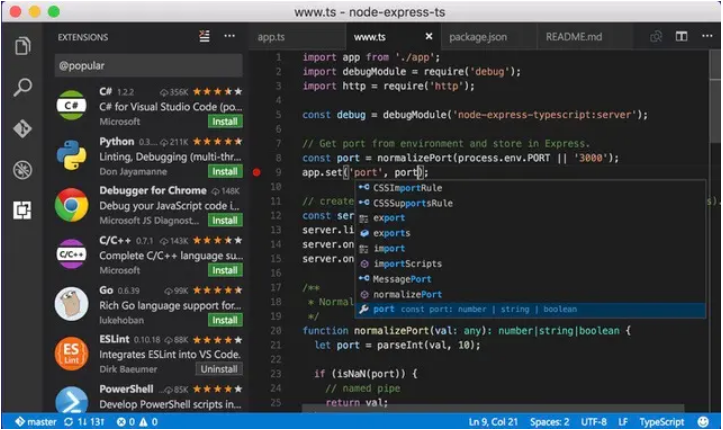 Microsoft’s Visual Studio Code (often abbreviated as VS Code) is a free, open-source code editor. The Electron foundation, on which it was developed on, allows it to run on Linux, macOS, and Windows equally well.
VS Code is unique among code editors in that it does not rely on a project-based system but rather allows you to work with numerous folders at once, each of which can be treated as its own workspace.

In terms of features, VS Code allows you to develop code in several languages, including C/C++, Java, Python, JavaScript, and Go. It has various tools to facilitate coding, such as syntax highlighting, snippets, code refactoring, debugging, intelligent code completion (or autocomplete), and Git support. In addition, you can synchronize your work with other people even if you’re not in the exact physical location.

IntelliSense and Peek Definition are just two of the few features available in Visual Studio Code that can assist newcomers in learning the ins and outs of programming languages. 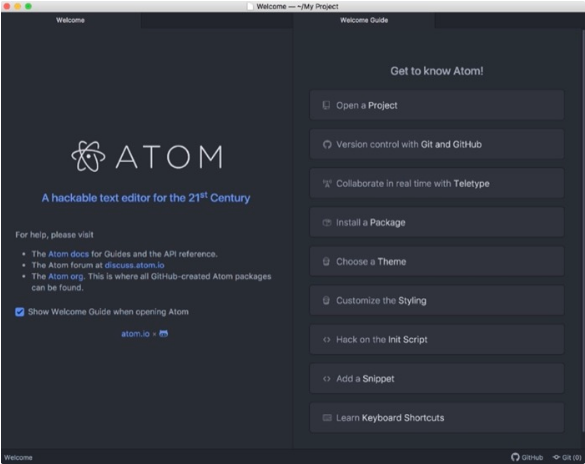 After Microsoft bought Github in 2018, the company was responsible for developing Atom. This made the fans worry about it. Still, one of the best and most adaptable text editors available is Atom, which calls itself a “hackable text editor for the 21st century.”

Numerous packages on the platform have been built by its community, and if a specific one doesn’t exist, it can be made by modifying the platform’s CSS. It is liked by developers who like lightweight text editors. Also, Atom supports cross-platform and is based on the electron framework.

Brackets, a popular text editor for Macs, is oriented mostly toward web development. Front-end developers and web designers would choose this app over any other alternative. Despite being created by Adobe, a company well-known for its subscription price strategy, Brackets is completely free to use. Brackets is an open-source project created by Adobe and maintained by its dedicated user base. Brackets’ “Live Preview” feature is fantastic since it instantly reflects any changes made to the CSS and HTML of the code in a Chrome window. With this function, programmers may monitor their code and avoid committing catastrophic errors.

Brackets integrate seamlessly with the rest of Adobe’s products. To give just one example, Photoshop includes an option called “Extract” that may be used to automatically extract data like color, typeface, gradient, and measurement from an a.psd file. Although Brackets currently has many useful features, you can add even more by installing one of the many available extensions. 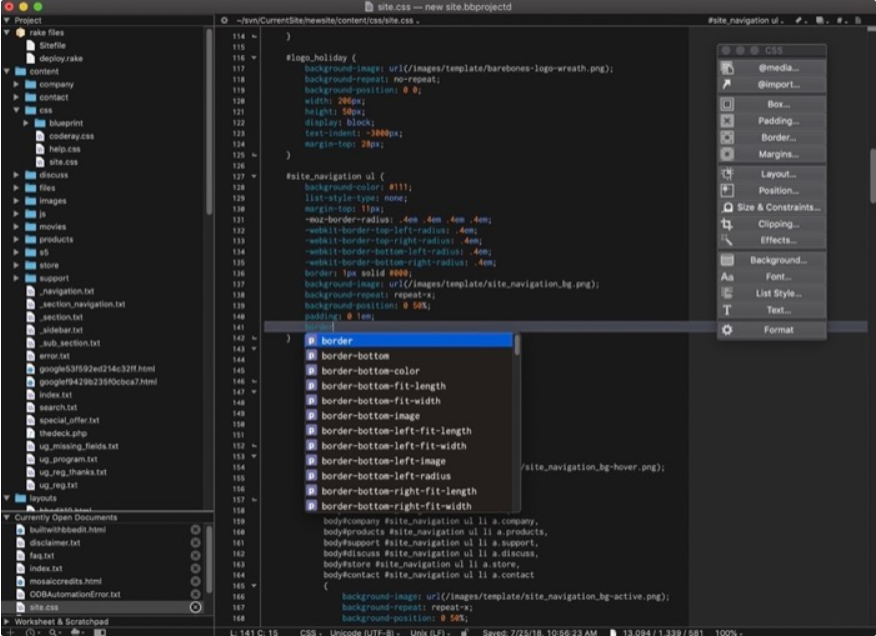 Bare Bones Software’s BBEdit is a text editor for Mac computers. It’s effectively a free replacement for the popular TextWrangler text editor, which was only made for macOS and was eventually discontinued.

In contrast to TextWrangler, BBEdit’s free version includes sufficient functionality and programming functionalities to make it stand out from the crowd of available text editors. It can function as a basic text editor for editing text files, but it can also be used for composing code or making scripts. AppleScript, Python, Perl, RegEx, and Shell are just some of the few scripting languages BBEdit is compatible with. 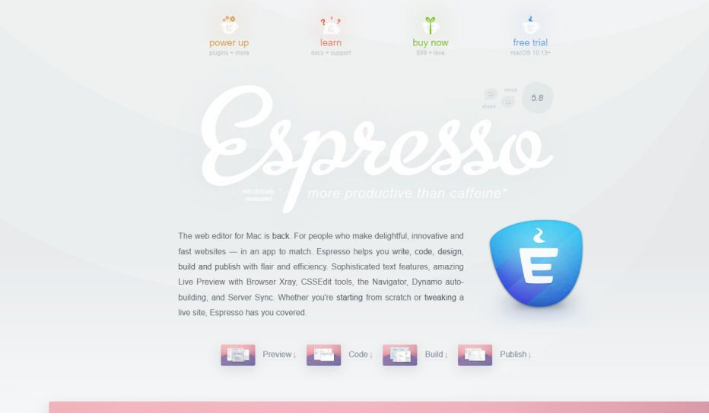 Espresso, an aesthetically pleasing Mac-only code editor, is a powerful and smooth text editor. The text editor’s streamlined interface is what allows its users to change CSS more quickly.

Created with real-time editing in mind, it features a three-column layout consisting of your files, the code editor, and the navigator. The latter allows you to quickly jump between different parts of the code you’re currently editing. Espresso’s interface lets you drag and drop material into the window to see the changes reflected in the backend as you make them. 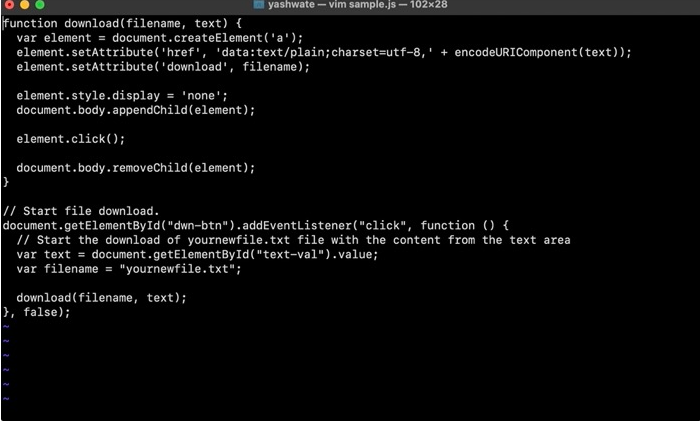 Vim text editor is a clone of Vi but with a series of improvements. Vi, a text editor that conforms to the POSIX standard, is pre-installed on most classic Unix versions, including macOS. Vim stands out aesthetically and functionally from the other text editors on this list.

Vim is a text editor that puts an emphasis on getting the fundamentals right, in contrast to other modern text editors, which emphasize providing a pretty interface packed with a tonne of features and functionalities.  However, the editor provides a variety of plugins that can be used to customize it to your specific coding needs, and more are being developed with time.

Since Vim lacks a graphical user interface, all your work must be done in a text-only environment, such as a command line or terminal window. It may also take some time to get acclimated to the various modes available in Vim, as the program is a modal editor. However, once you master Vim, you’ll find that it greatly enhances your productivity. 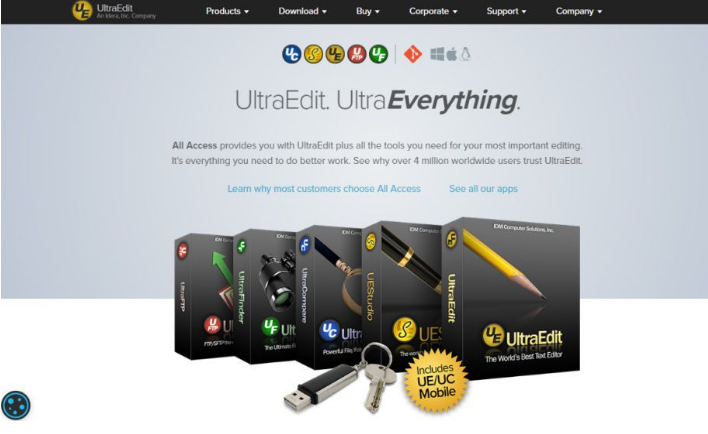 When it comes to text editors for the Mac, UltraEdit is among the best and most powerful in the list. Languages that may be edited with UltraEdit are C, Objective C, Javascript, XML, PHP, Perl, Python, and many more.

UltraEdit, like BBEdit, has been around for quite some time: it’s been around for 25 years in the market. Therefore, trustworthiness is not an issue. Support for themes, files larger than 4GB, multiple language syntaxes highlighting, multiple caret editing, multiple selection capabilities, a powerful search, an integrated FTP, support for 4K, and Apple’s Retina display are some of the good features of this platform. 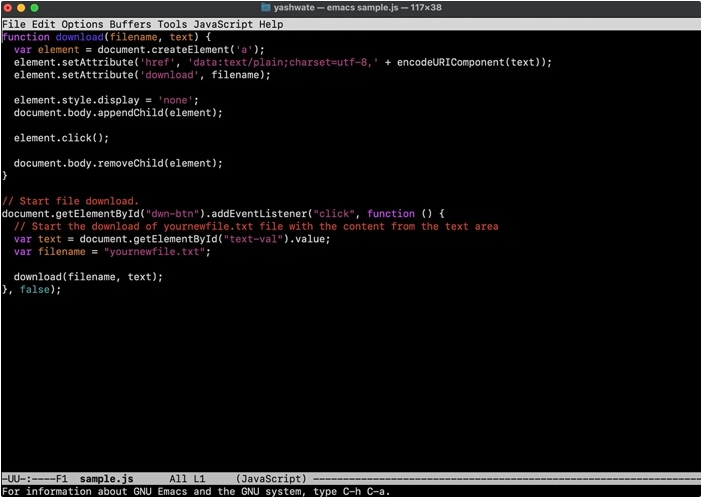 It allows customization, but its settings are more subtle and flexible. There are more than ten thousand commands available, and the UI makes it easy to combine them into macros that automate routine tasks.

In a nutshell, Emacs is a comprehensive suite of tools that includes a text editor, a project planner, an email client, a news reader, a package manager, an IRC client, and much more. 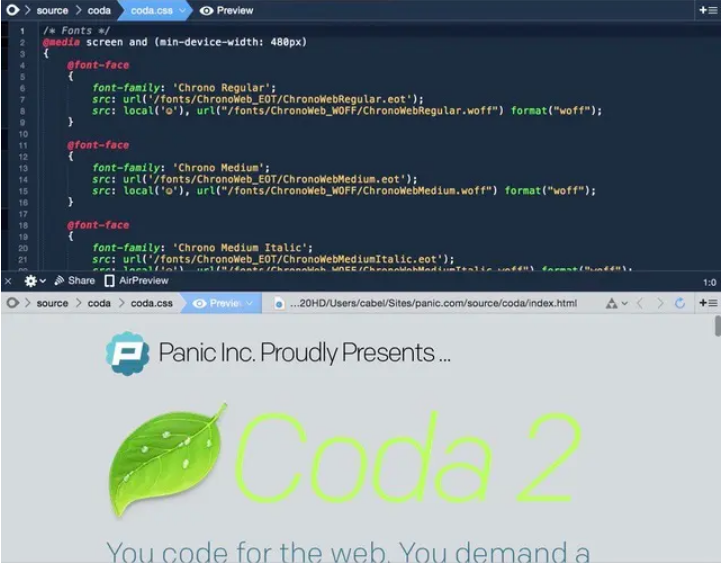 Coda also offers a well-integrated file system, making it a top choice. Files stored locally or via FTP, SFTP, WebDAV, or Amazon S3 servers can be accessed and edited by users.

There are many new options available in Coda 2, which has just been released. With version 2, Coda now supports the touch bar on MacBook Pros, quicker syntax highlighting and symbol parsing, local file indexing, CSS overriding, and much more. 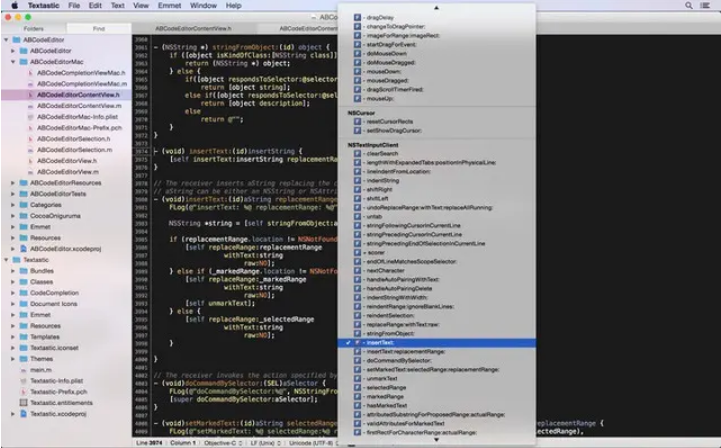 You won’t find a more reasonably priced and efficient Mac text editor than Textastic. It is a fast and effective code, text, and markup editor. So far, more than 80 programming and markup languages have been added to Textastic’s list of supported syntax highlighting languages.

It also has code completion assistance for the HTML, CSS, JavaScript, PHP, C, and Objective-C programming languages. The ability to use numerous tabs while working in the text editor is another great feature that facilitates code review and consultation. Besides all of that, there’s also built-in support for Emmet, rapid file searching, printing, symbol list navigation, and more.

By taking the best features from both the UNIX foundations and the GUI, TextMate is used both by experienced programmers and those just starting out. It’s lightweight and has a clean, minimalist interface, but it still has enough project management functionality to satisfy most users. TextMate’s features include syntax highlighting in various languages, auto-pairing of brackets and other characters, column selection and typing, recordable macros without the need for programming, and more.

This is our list of the best text editors for Mac in 2023. You can download and use them according to your needs. Do let us know your favorite from the list.