BeReal app is the latest photo-sharing app to go viral after the success of Instagram and  Snapchat among Gen Z. However, this app features a twist where it forces users to actually stay real while posting without filter pictures, and you can only post once a day. 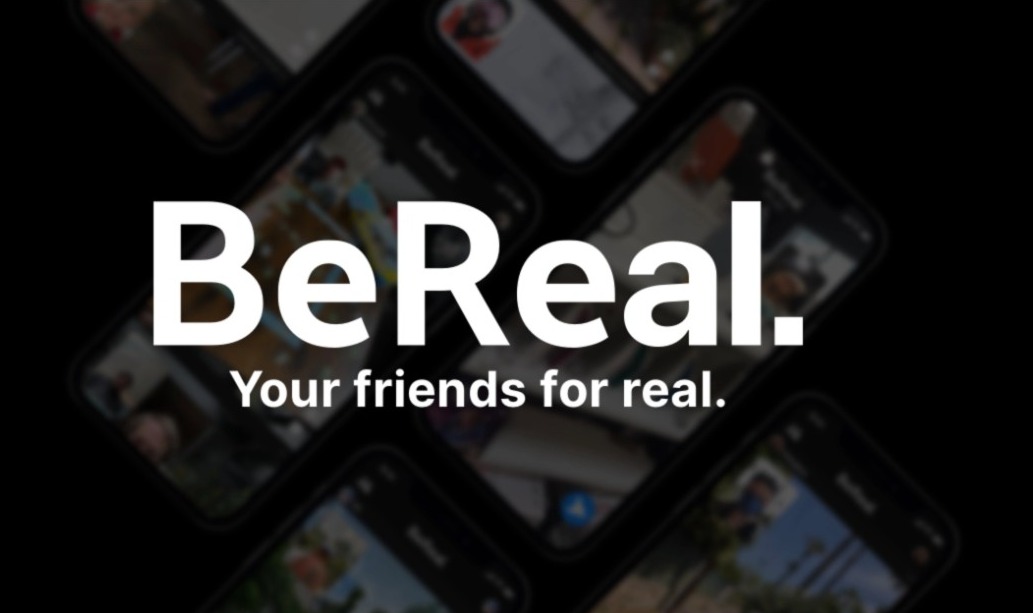 If you haven’t heard about this app from any of your friends yet, chances are you’ll hear it soon. I also heard about it from a friend first and then decided to explore it. Later, it turned out to be truly unique and impressive. Thus, I’m writing about it here to let all the readers know.

BeReal is not like any other social media platform where you can post whatever you like, no matter how true or fake it is. Instead, this app only allows you to stay real. The users have to share an unfiltered look at their life on this app every day.

Check out everything about the BeReal app in this guide that also explains using it if you are a new user.

What is the BeReal App?

BeReal is a new social media application, available for both Android and iOS devices, that is getting viral rapidly these days, especially among Generation Z. This app is exactly what the name suggests- you have to be real on the platform, and not live in the online persona that you have on Instagram or other social networking apps.

It allows people to be the authentic version of themselves in the online world. BeReal app is created by Alexis Barreyat, a French app designer. This app was launched in 2020. However, it is becoming known recently as it goes viral after the pandemic. 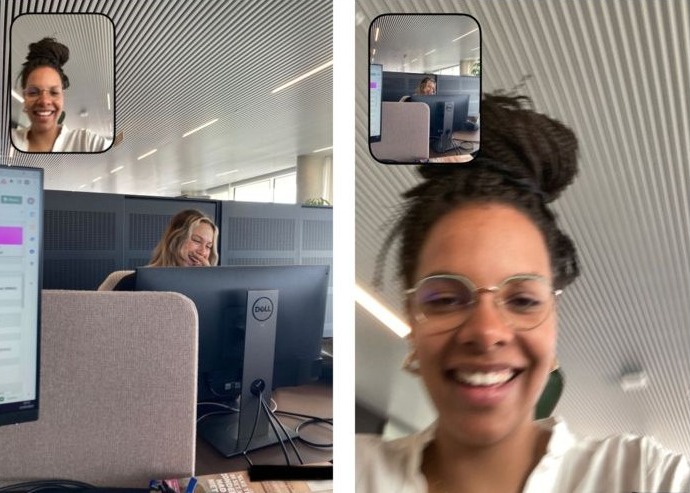 According to Social Media Today, the downloads of the BeReal app have surged by a whopping 315% since the beginning of this year. It is the fourth most downloaded social media app of 2022 in the Apple App Store, only bettered by Instagram, Snapchat, and Pinterest.

The app store description of BeReal states, “encourages people to show your friends who you really are, for once, by removing filters and opportunities to stage, over-think, or edit photos. ”

How does the BeReal App Work?

The BeReal app promotes users to take a picture within a time-limited frame of two minutes and post it every day. It will simultaneously take the picture from both the front and back camera to show you and your life. The prompts are random and do not appear at a fixed time.

This gives users no time to fix anything and just share the reality. These pictures are called “BeReals” just like Snapchat calls its pictures “Snaps.” You can also retake them but the application will tell your friends how many times you re-took them.

You will also have to tell the app a reason if you decide to not post the picture after clicking it or when you are deleting it. Your friends will also receive a notification if the two-minute timer gets over.

The BeReal app also allows you to react to your friend’s BeReals using RealMojis. These are not the generic emoticons but your own picture showcasing a reaction. You’ll have to capture it within the app and use it. Your RealMojis will appear at the bottom of the post.

Remember that you can only post one BeReal every day, and not more or less than that. However, there is no streak or score like Snapchat. If you decide to not post a BeReal on any given day, you won’t be able to view your friends’ BeReals.

Getting Started with BeReal App: How to Use it?

The BeReal app is pretty simple and straightforward to use. However, users are habitual in using apps like Instagram, Snapchat, and Twitter. Thus, they may feel a bit confused while starting on this app.

Follow these steps to start using the BeReal app and learn how does it work: 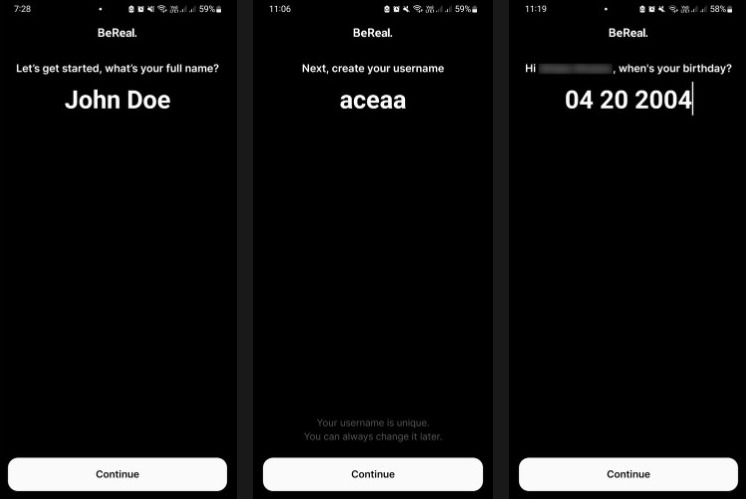 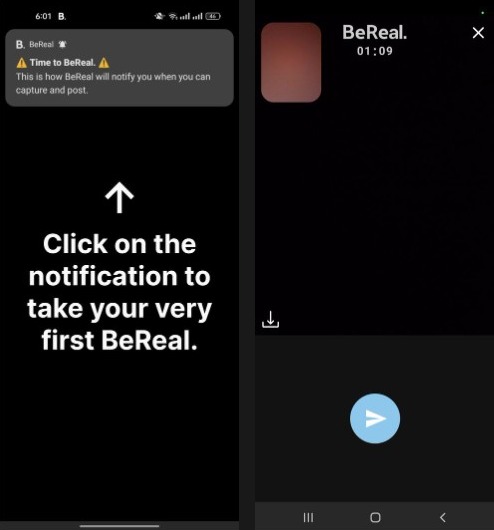 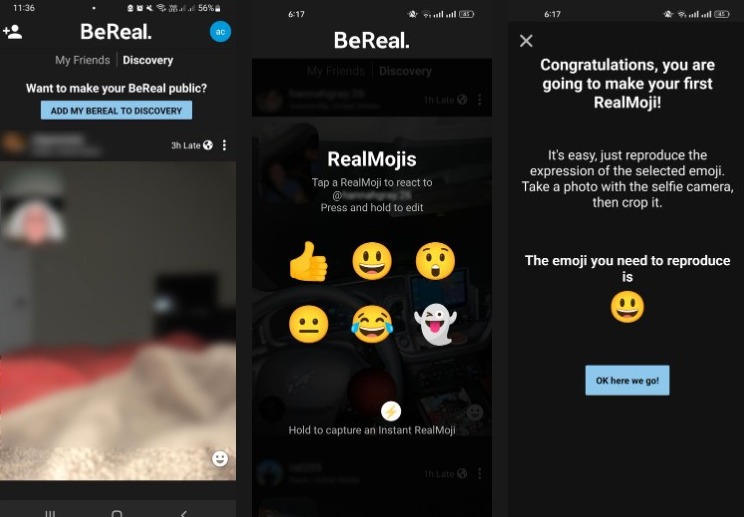 These are the basics of the BeReal app. Now let’s take a look at how the app is different from other social media apps.

How is BeReal App Different than Other Social Media Platforms?

BeReal is a photo-sharing social media application that eliminates the shine and glamour that people are used to on traditional platforms. This app asks users to post an unfiltered look into their lives every day. You can only post one photo of what you are doing in real-time.

There are no filters or effects, and there’s no time available to edit the picture either. After capturing a photo, a two-minute timer will start and you have to post the picture before it ends. Your photo will be shared with your friends. You can also share it with everyone by making your account public. 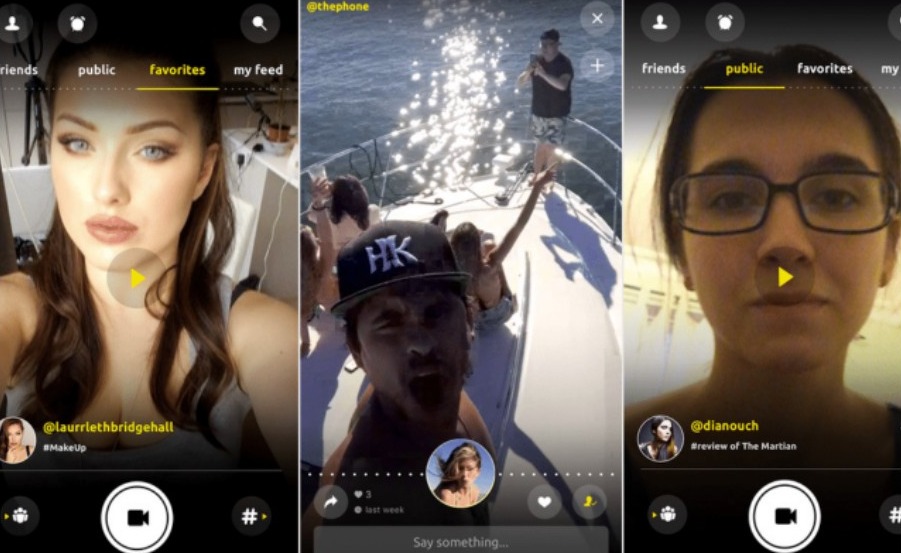 If you decide to not post a picture, you’ll have to choose a reason from the available options. Also, if you are late in posting your daily unfiltered look, then your friends will receive a notification that possibly shames you a bit.

On traditional social media platforms, you see people with lighter and clearer skin, sharp jawlines, no fat, and other unrealistic traits. You also see them on vacations having expensive food in a luxurious location. All of this is unavailable on BeReal. The users must be real on this app.

Is BeReal App Safe and Genuine to Use?

Yes, BeReal is a safe and genuine application available on Android and iOS devices. It is intended for users at least 13 years of age or older. There’s no pressure of gaining likes, views or follows contrary on other social media platforms. Users can’t even text each other.

This makes it safer than Facebook, Instagram, or Snapchat. However, some points that raise certain eyebrows are:

As social media begins to turn away from filters and ‘Instagrammable moments’, one app has seen a surge in popularity. Our online safety experts have taken a look at BeReal to help you understand the attractions and risks for young people. Read it here ⏩ https://t.co/MsB9mwoXT1 pic.twitter.com/O8G6BlylHz

Apart from these factors, there is nothing to worry about using the BeReal app. You should still use it with care. Safer Schools recommends that people shouldn’t post too many personal details on the app to stay safe.

Is BeReal App Worth Trying?

Yes, I believe the BeReal app is worth trying if you are too anxious or feeling FOMO after watching people have fun on Instagram, Snapchat, and Facebook. This app will let you know that others are also having a normal life. They too have work and assignments to complete.

BeReal is a top tier app

Thoroughly enjoying @BeReal_App, feels like the fun early days of Snapchat. Free of adverts and “celebrities”.

But they should make it more real, and have a cut off to post—say 1 hour.

BeReal is my fav app atm

There are imperfections attached to everyone and no one is living a near-perfect lifestyle. This may make you feel good about yourself. Another advantage of the app is you can see your old friends in reality and know what they are actually doing.

There’s no compulsion to talk with each other. Just see each other living their lives and nothing else, like the early days of the Internet. If you haven’t tried the app yet, you must give it a shot once.

Afterward, let us know your experience and opinions about the BeReal app in the comments section.