Technology has made our lives more accessible than in the pre-tech era. Nowadays, there are many gadgets that make your work easier. You can use an iPad in order to take notes in class or meetings. Note-taking has been a habit for many people around us. Some use offline diaries, and some use note-taking apps.

What Makes a Note-Taking App Great?

Before getting into the top note-taking apps available, it is vital to explore what features might make an app amazing. First, the app must be basic and easy to use. Some developers seek to add as many “bells and whistles” to their software as possible. Unfortunately, these apps tend to become too sophisticated and difficult to use.

For us, the quality of the features the app offers is above the number of such features. The functions of an app should be intuitive and serve a specific purpose. When choosing an app, users should be sure to focus on the functions they require. After all, a single beneficial feature can be worth a hundred useless ones.

Note-taking applications can be found in a broad variety of price points, each with its own unique set of features to consider when making a final decision. Only the user can judge whether the price of an app is worth its features. Verify the app’s value by reading reviews written by customers who have already paid for it before you spend money on it.

When we hear or see something and try to remember it, we might forget it in the end, or the image or thing gets blurred in our minds. For that purpose, note-making apps make your work easier. You can type, draw, and capture at any time through a note-taking app. So, we have made a list of the top 13 note-making apps for Mac that you may find helpful. 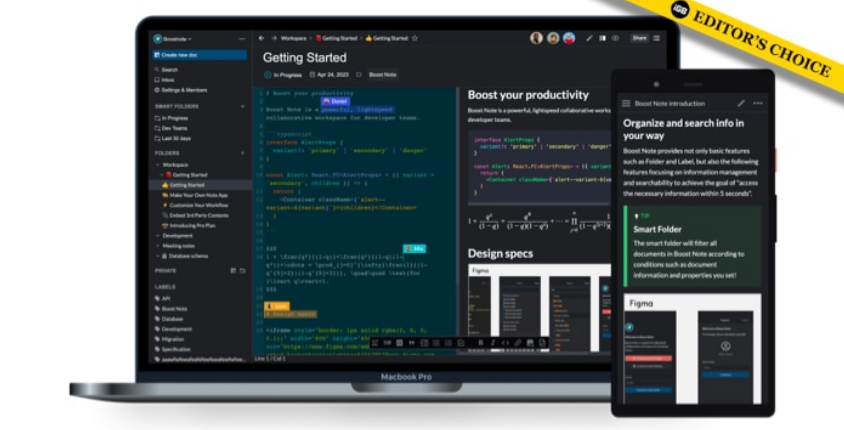 Boost Note is a versatile and feature-rich markdown editor that is mostly used by developers and their teams. The ability to create and edit texts in real-time is what makes “real-time co-authoring” so useful when you are working in groups.

In addition, over three thousand external apps and tools can be seamlessly integrated into your workflow, allowing for complete customization and management. The app offers IDE-like UX-enabled searchability options along with a smart folder.

An impressive feature of this software is that it keeps track of every update you make to a document and lets you go back to previous versions at any time. More crucially, it works on multiple platforms and not just macOS, including web browsers and mobile apps. 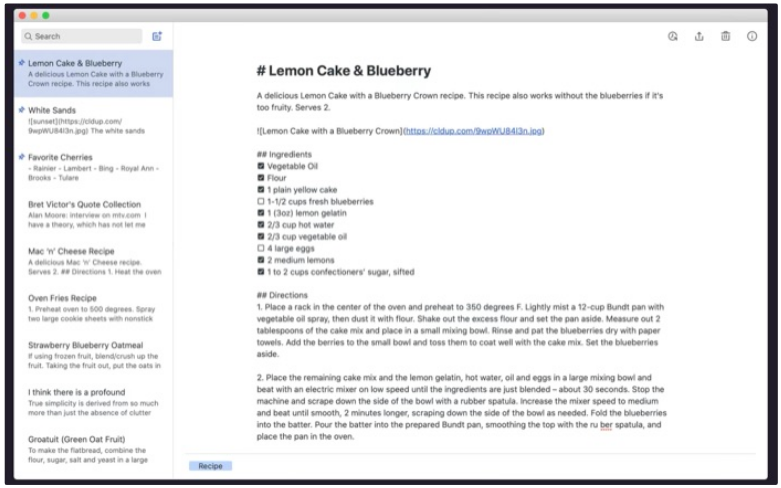 One of the easiest ways to take notes on a Mac is with Simplenote. It’s lightweight and makes keeping track of ideas and thoughts a pleasure. If you prefer the markdown format for your notes or checklists, you may use it for that, too.

Since it is a cross-platform notes app, you may use Simplenote on any device, not only Apple products, and your notes will be seamlessly synced between them. In addition, you may always use the web-based version of Simplenote.

Note history is a fantastic feature of Simplenote. This function, as its name implies, keeps track of all the revisions made to a note and allows you to revert back to a previous version at any time. In a similar manner, you may share your note with others to work on them, which is helpful if you want to get feedback on your idea or participate in a group session.

Tags are an integral part of Simplenote’s organizing process and search features, allowing you to group notes together and make them more readily accessible in your note archive. Additionally, it features an integrated search function that allows locating your notes among all of your notes quite simply. 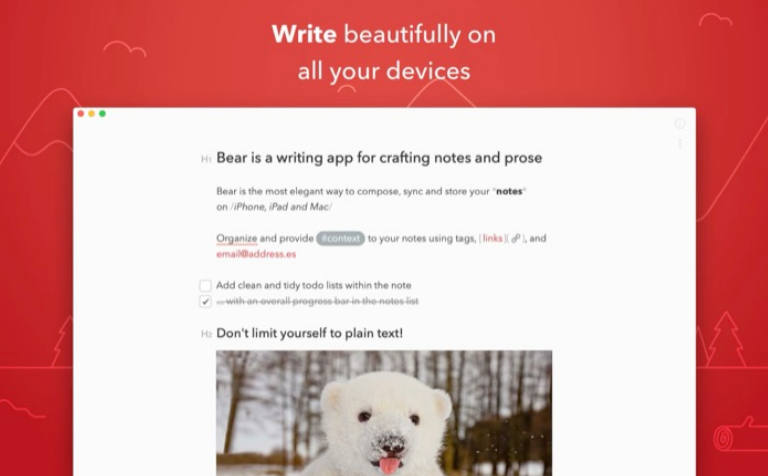 Bear is, without a doubt, one of the best-looking note-taking apps for Mac. It’s only compatible with Apple products, but you may use it as a replacement for Apple Notes thanks to its powerful text editor, many customization options, and support for markdown.

Bear lets you compose notes using a variety of different fonts, making it a great feature for typography enthusiasts. The look of the app can also be customized by choosing from a variety of themes. Bear’s concentration mode is our favorite feature since it allows you to take notes on full-screen, which greatly improves our productivity while writing. As a result, you’ll have fewer disruptions.

More than 150 programming languages are supported by Bear’s advanced markup editor. Because of this, you may easily jot down code snippets in your notes without having to worry about formatting. One of Bear’s many useful features is the ability to upload photographs directly into your notes.

In addition, Bear includes sync automation. This means that if you also use it on an iOS device, such as an iPhone or iPad, your notes will be synchronized between all of them. The app also allows cross-note linking so that you can easily refer to other notes. 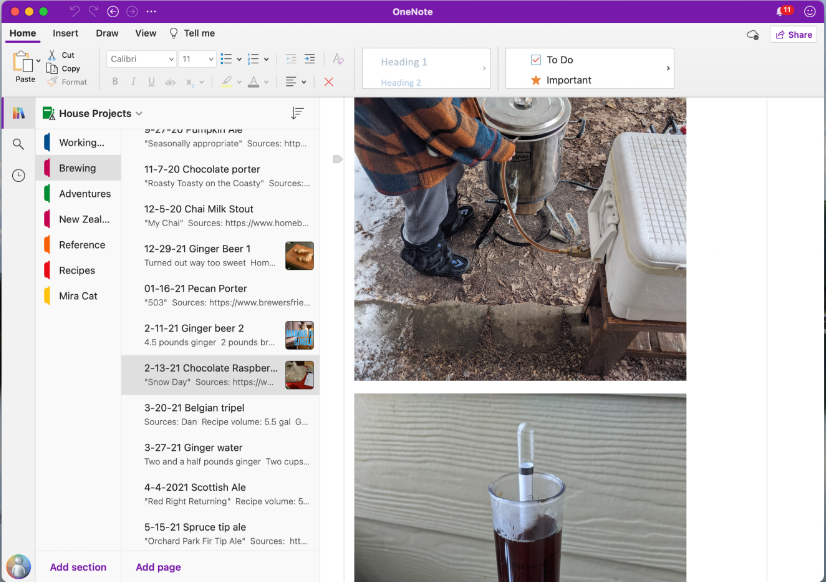 OneNote was released in 2003, making it the oldest note-making app on the list. You must have heard, “Old is Gold,” and this is the best example. It provides a far more feature-rich free alternative than any competitor. OneNote’s design is a model that has been adopted by a wide variety of other apps.

Users of Microsoft Office will find the interface of OneNote to be quite comfortable and intuitive. While the other apps in this list feature more like traditional text editors, OneNote is more like a blank sheet of paper, allowing you to click anywhere and begin typing immediately. Images and documents can be posted inline or as attachments, and there is also support for drawing, but this is more convenient on a tablet than on a Mac. 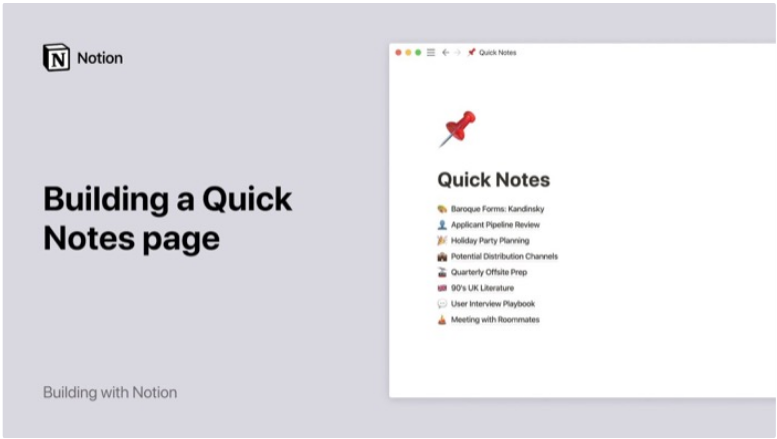 The notion is a cutting-edge note-taking app that syncs with cloud storage and facilitates group projects. It’s a hybrid editor for modifying text, and it makes taking notes a lot easier.

You can make your notes both informative and visually appealing thanks to the ability to embed media such as videos and photos. Notes taken in this app are retrievable. Additionally, Notion lets you save time by making note-taking templates based on your preferred layouts.

It has all the features you need in a note-taking tool and much more than that. We recommend this for anyone who needs a note-taking place primarily for business or school. 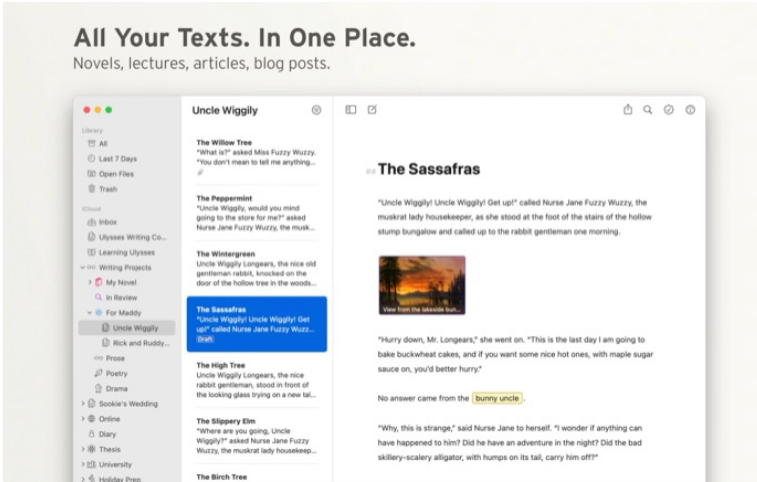 Ulysses is another “Mac-only” notes app developed by Apple. Its primary strength is in the suite of writing-specific tools it provides, which facilitates the entire writing process and ensures accuracy in matters such as grammar and style. In addition, Ulysses allows you to schedule writing periods with specific goals in mind, ensuring that you don’t deviate from your work and instead produce more efficient work.

Ulysses has a clean, minimal user interface even after having so many features. This facilitates fluent movement between the app’s features and encourages total concentration on the writing task. Ulysses’s focused writing mode helps you in writing long intellectual articles as it further cleans up the interface. 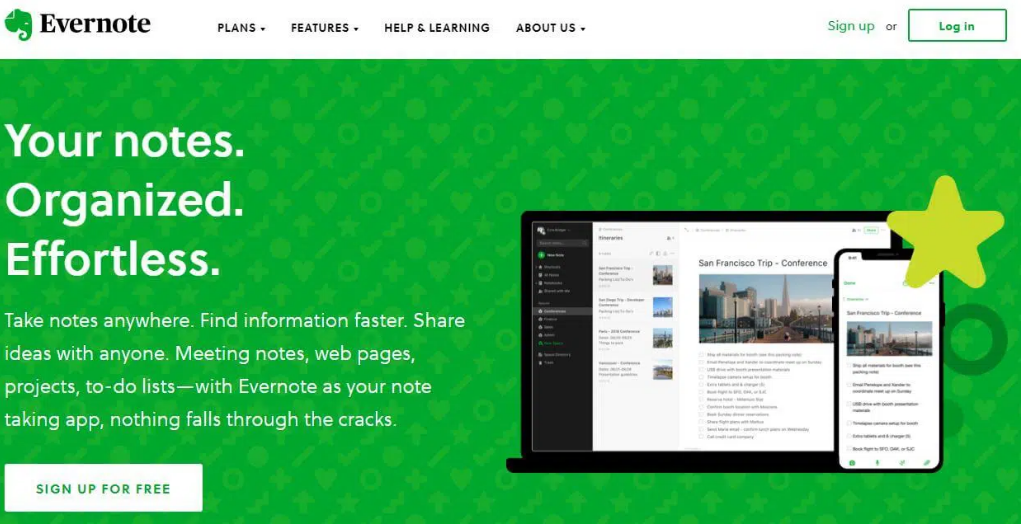 Even after so many competitions, Evernote still remains one of the most used note-taking apps for both macOS and iOS. It offers a wide range of tools in order to provide more flexibility.

You can record your thoughts on the app in a variety of ways (video, audio, online clippings, sketch) as it helps you shape your ideas effectively. With an easily formatted word processor, you can put your thoughts down on the app with style.

Do you frequently fail to remember to complete critical responsibilities? Get organized by creating a list of everything you need to do. 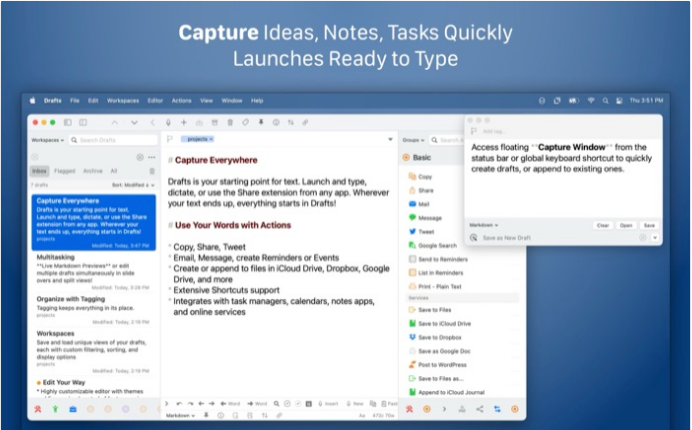 When it comes to note-taking apps, Drafts is the most powerful app. It’s also the simplest and most intuitive to use. Because its primary function is text capture, you can store any idea or concept that comes to mind in Drafts and decide what to do with it at a later time.

The user interface of the Drafts app is designed in such a way that all attention is directed to the new and existing drafts. To put it simply, it is an editor that supports markdown to write a new draft. This rough draft could be anything from a string of words to a list of steps to be taken. After this thought has been captured, a number of operations can be carried out on it.

You can use tags and flags to organize your draft. Other features include dictation for times when you can’t type, version tracking, and the ability to export your work in several formats. 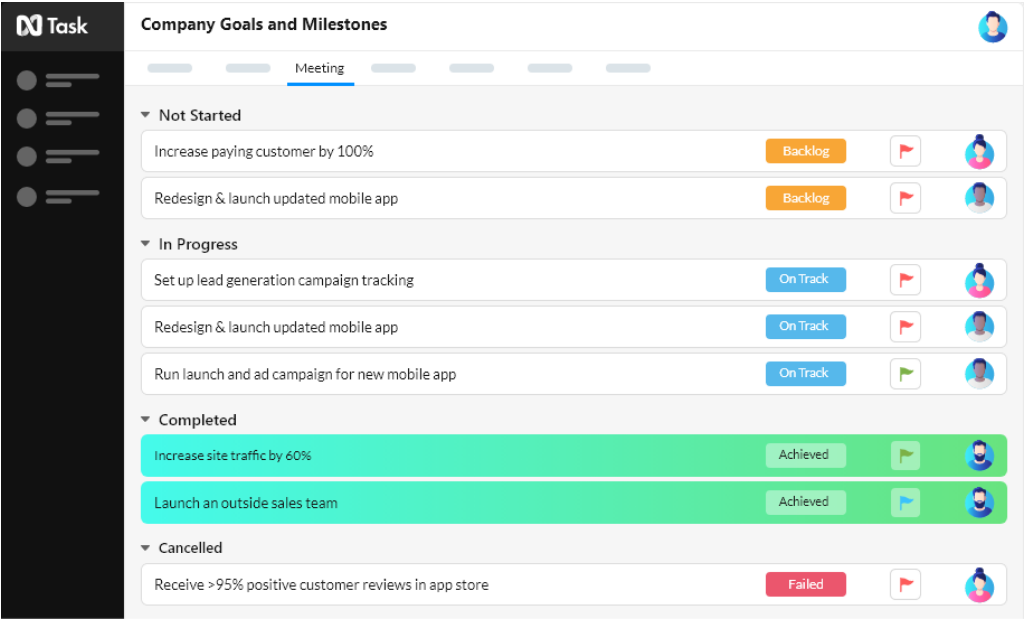 nTask is a note-taking application that makes it simple to jot down thoughts, file them away in folders, and share them with others. It is considered best for people who are into class, work, or any type of study.

The emphasis on group work is what sets nTask apart from similar note-taking apps. When using nTask, numerous persons can make changes to the same page at the same time, eliminating the need to rely on a single user to keep track of everything. This ensures that everyone is up to date and may switch tasks between duties without any hiccups. 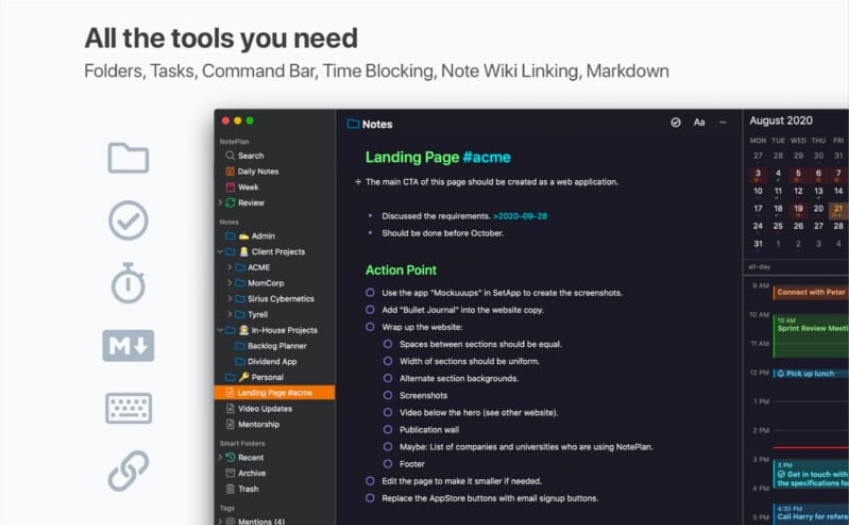 NotePlan is a note-making app known for its user-friendly interface. It is an app that you can use for both a calendar and a task manager.

It will automatically recognize any dates in your notes and put them on your calendar. More than that, you can even import these dates into your Apple or Google calendar with a simple sync.

In addition to synchronizing your calendar, you can also choose to back up the data in NotePlan to the iCloud server. The data will be kept safe. 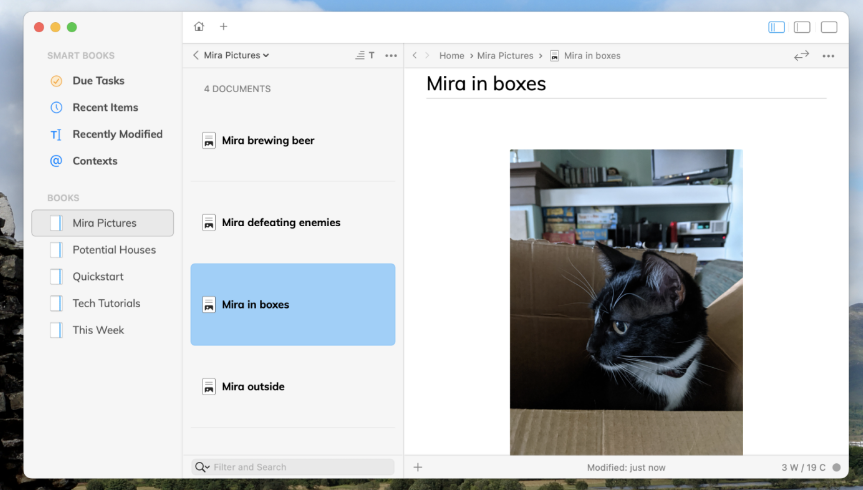 Applications developed by Zoho Corporation are often regarded as among the best available. Indeed, Notebook possesses every feature necessary for being the best note-taking app.

There’s a lot to appreciate about this software, but my favorite feature is “Smart Cards.” Essentially, what it does is organize the content into several types of cards, such as the recipe card, the video card, and the link card.

The software features a number of templated note covers to help you craft beautiful stories. It’s possible to make your own cover if you don’t like the pre-made ones. In addition, you can make your notes visible to anybody by creating public ones and sharing the links.

Working late into the night won’t feel like a chore, thanks to the night mode’s spooky design. With the help of reminders, you won’t forget about any of your duties.

That’s our list of the top 11 note-taking apps for macOS. These are minimally aesthetic, along with tons of features. So, do check them out and let us know your favorite one.