Selena Gomez is killing them with her looks! On Tuesday night, the Lose You To Love Me singer stepped out for the 2023 Golden Globe Awards in a black velvet Valentino Haute Couture gown.

We must say, the Only Murders in the Building actress knows how to slay on the red carpet. Continue reading further to catch more details about Selena’s look for the 2023 Golden Globes. For the 80th edition of the Golden Globes, Selena wore a black velvet Valentino Haute Couture gown that featured voluminous purple sleeves as well as a sultry off-the-shoulder neckline.

The Look at Her Now singer decided to skip the necklace, and instead opted for a pair of long diamond drop earrings from De Beers. She put her dark locks in a sleek high ponytail. Her hairstyle was created by Marissa Marino. It was a big night for Come and Get It singer as she was nominated for Best Performance by an Actress in a Television Series – Musical or Comedy. For the special occasion, she brought her little sister Gracie as her date.

On the other hand, when it comes to Gracie, the younger sister of the popular singer was all dolled up in a gold sequined tulle dress. She completed her outfit with a pair of glittering heels and a crystal-covered Prada purse ($3,900).

Lately, Selena and her 9-year-old sister Gracie Teefey have been spending a lot of quality time together. Not long ago, the sisters hung out together with the Holidate actress Nicola Peltz as well. 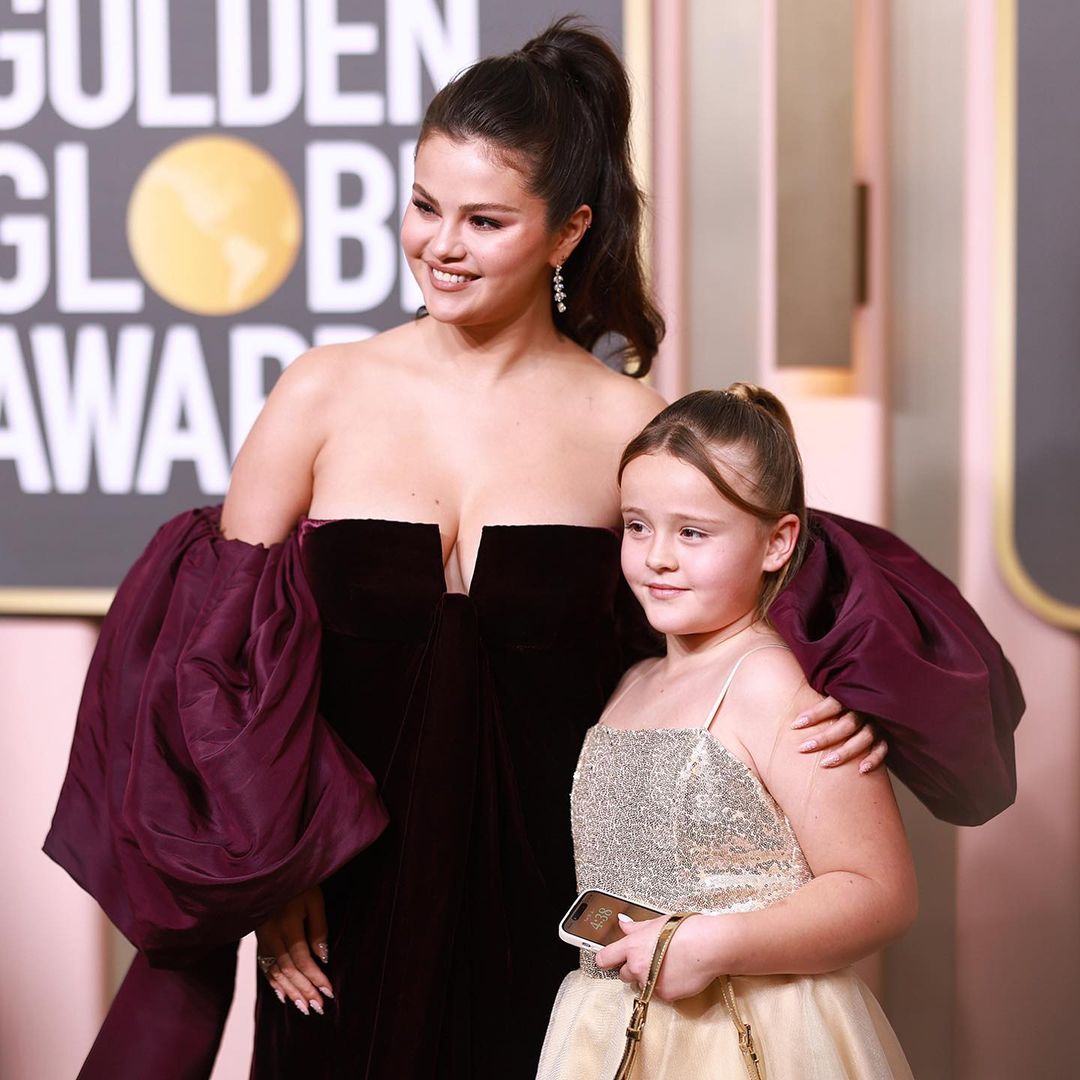 The full name of Selena’s younger half-sister is Gracie Elliot Teefey. At the moment, Gracie is 9 years old, which means she and Gomez have an age gap of a total of 21 years. These two are the definition of sibling goals.

Despite being busy with her work, Selena makes sure to spend some quality time with her sister Gracie. Over the years, we have seen the two of them at red carpet events and sister date nights together.

When Selena was 20 years old, her mom Mandy Teefey gave birth to Gracie Elliott Teefey with Gomez’s stepfather Brian. She was born in California on June 12, 2013. In the past, the Same Old Love singer shared the pregnancy news of her mother on the social media platform Twitter. At that time, she tweeted, “I’m the happiest girl in the world!”

Gracie looks up to her elder sister Selena as a role model. Not only this, she turns to her sister for some fashion advice as well. In an interview with Vogue, Selena stated that her younger sister Gracie is already raiding her closet. Then, she said, “I thought I’d have a little more time with my clothes, but that’s just not the case.”

Did you like Selena Gomez’s outfit for the 2023 Golden Globe Awards? Kindly let us know your thoughts in the comments section below. Don’t forget to stay tuned with us for the latest updates from the world of showbiz.