Those who know Millie Bobby Brown from Stranger Things might know her “011” tattoo in the series, but did you know that she has a few tattoos in real life as well? Since the show debuted in 2016 and became hugely popular, fans have been obsessed with the star kids’ lives including what they study, who they hang out with, who their best friends are, and even how many tattoos they have.

All in all, the Stranger Things actress has 4 tattoos so far. They are all small and kind of hidden away. But curious fans still managed to spot them and want to know what they mean.

No matter how successful or famous Millie Bobby Brown becomes, she will always be remembered for her role on Stranger Things, which started it all for her. In the series, she was referred to as “Eleven” and even had the number tattooed on her.

This was because she was a test subject in a lab, so she did not even get a real name.  Interestingly, she was also only 11 years old when she first starred in the show. To commemorate her time on the show, Millie went ahead and got the number tattooed on her arm permanently. It is etched in black ink on her left wrist. The tattoo is quite small and easy to miss.

Millie debuted a rib cage tattoo at the premiere of Enola Holmes 2. She wore a halterneck gown by Louis Vuitton. In certain angles, the ribcage tattoo was clearly visible. The tattoo, Ruth, was Millie’s grandmother’s name and it was a tribute to her. 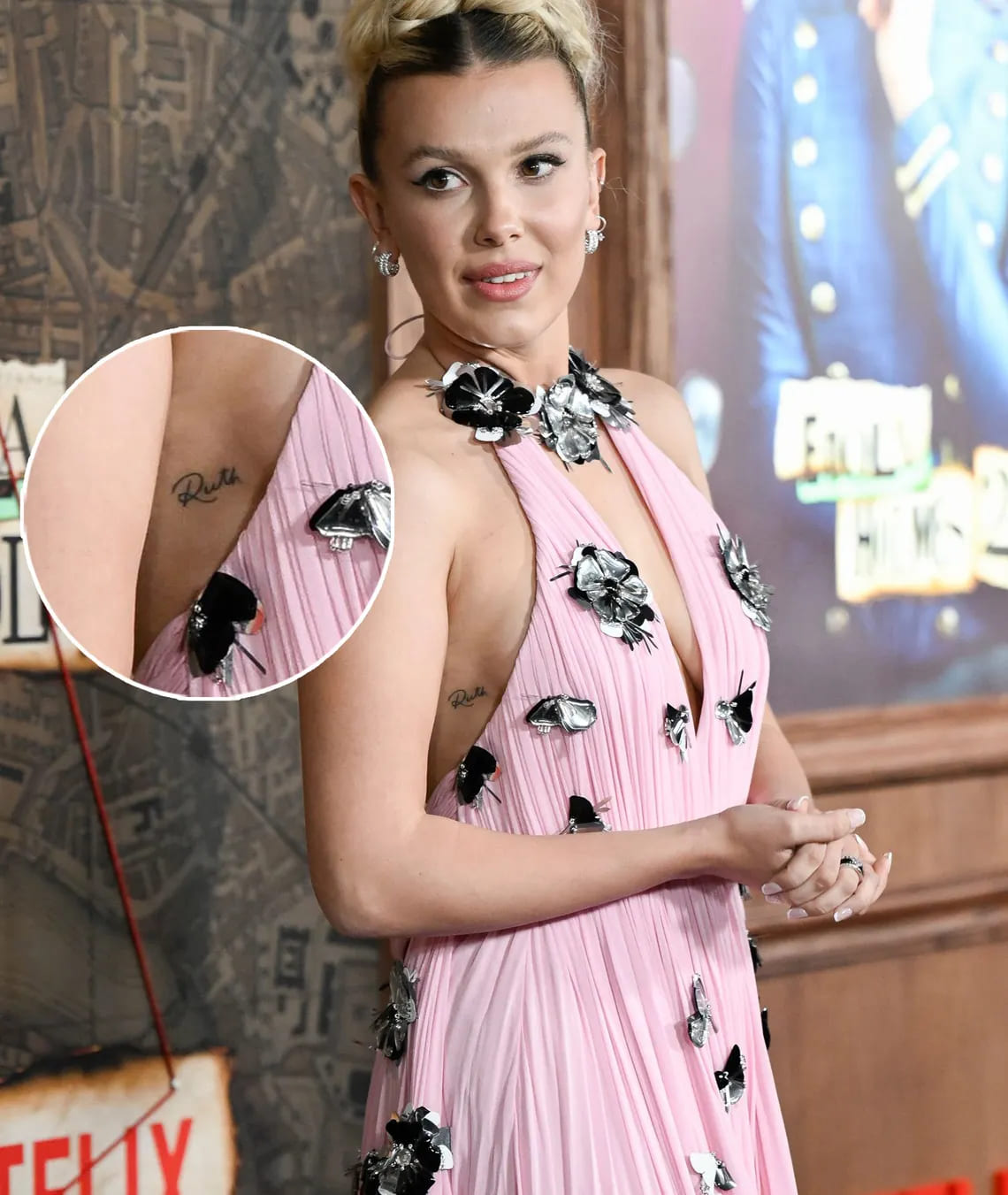 Her late grandmother passed away in November 2020, she suffered from Alzheimer’s.

Millie also got a tattoo for love. She got a rose tattooed on the left side of her back. Fans caught this in a picture that Jake Bongiovi uploaded. Although there might be a deeper and more substantial meaning to the tattoo for Millie, a red rose is considered to be an eternal symbol of love.

You may have to zoom into pictures and squint a little to spot this one! She has a small heart tattooed above her left shoulder. It is not clear if the tattoo has any significant meaning to her, but considering how all her tattoos have a deeper meaning, this one might as well. Millie is serious about acting and everyone knows that an actor should not get visible tattoos you get stereotyped into certain roles only.

Over the years, Millie has also gotten a few temporary tattoos like that of a dinosaur on her arm. It is pretty evident that she likes tattoos and she likes them to be personal and meaningful as well.

As a young 18-year-old, she has started her collection with a bunch of small and meaningful tattoos but as she grows and evolves, so will the tattoos.

Tattoos are said to be a visual representation of a person Millie’s tattoos do define her well. Although she tries to keep them hidden, fans are curious enough to spot them.