Over the years, we have seen the transformation of the Queen of Pop, Madonna. If you were born in the 80s, then you would have surely grown up dancing to the songs of the Material Girl hitmaker.

Madonna is one of the most famous pop stars in the world right now. The full name of the Queen of Pop is Madonna Louise Ciccone. She shot to fame in the 1980s with songs like Like a Virgin, True Blue, Borderline, Lucky Star, and Holiday. 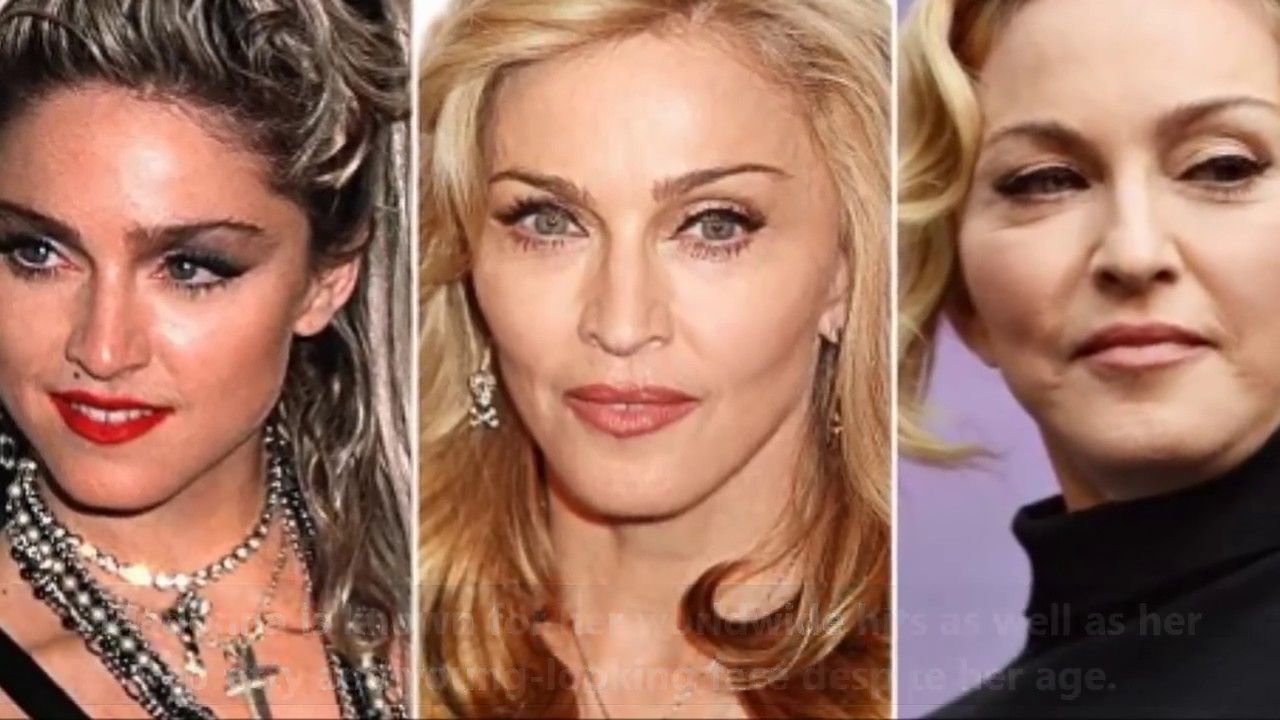 As of this moment, the Like a Virgin singer has dropped a total of 14 studio albums and has received 24 Grammy nominations. She has bagged 7 Grammy awards in her kitty.

Being a celebrity in the public eye is not a piece of cake as the cameras are following you all the time. Throughout Madonna’s career spanning over 4 decades, there have been rumors about her getting plastic surgery. Continue reading further to learn whether Madonna underwent the knife or not.

Did Madonna get plastic surgery done?

Every now and then, the rock star Madonna is experimenting with the color of her hair. Over the years, she has not been afraid of trying bold and risqué outfits. The netizens believe that she has surely undergone several cosmetic procedures through the years.

As of this moment, the Papa Don’t Preach singer has never admitted that she has had work done on her face but it seems like she has had collagen implants, Botox, and facial peels. She has never confirmed the same in the public and denied entertaining conversations about the topic. 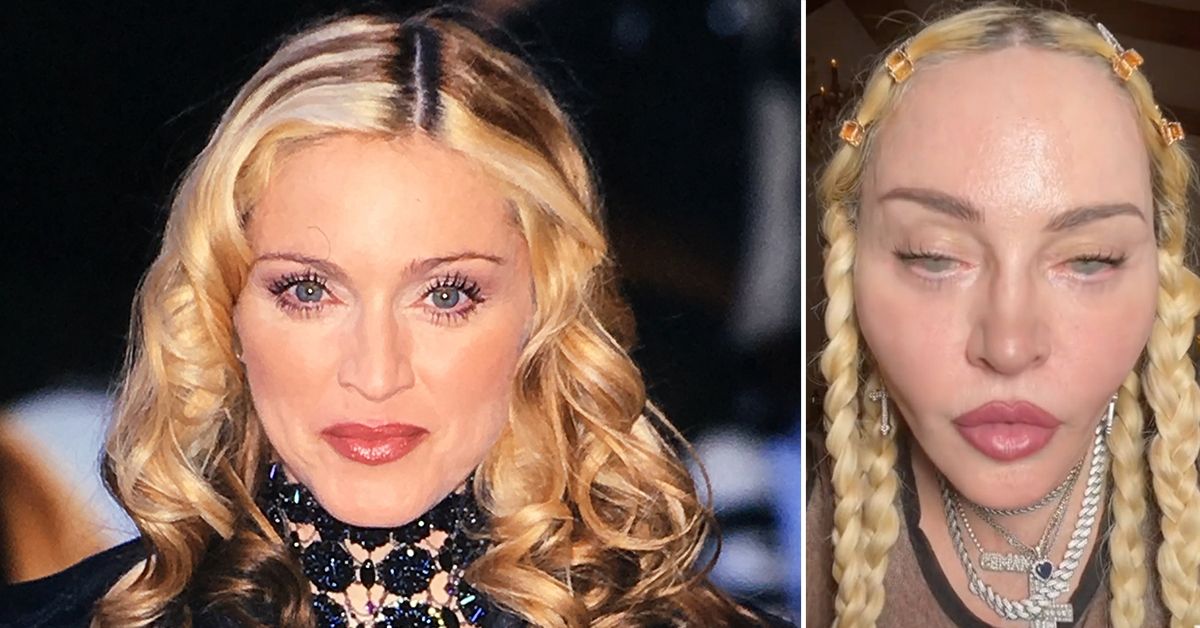 During a media interaction in the year 2012, the A League of Their Own actress put out her thoughts on plastic surgery. At that time, she went on to say, “I am certainly not against plastic surgery. However, I am absolutely against having to discuss it.”

When Madonna was in her mid-twenties, her face looked very fresh. At that point in time, her makeup included black eyeliner and red lipstick. She was well-known for the beauty spot above her upper lip. By the nineties, she matured a bit but she still swore by her red lip and curly hairstyle.

As per the reports of The Sun, the Give Me All Your Luvin singer had her first facelift in the year 1995. At that point, she was only 37 years old. Around the same time, it was reported that she had a scar around her ear lobe which “wasn’t there before.”

The media outlet went on to say that Madonna had her second facelift after a total of 10 years in 2005. It has been stated that she had her third facelift in 2020. In the year 2010, her face started looking a lot different than before. Her face seemed puffier and that was the time when even the fans started wondering whether she had fillers. 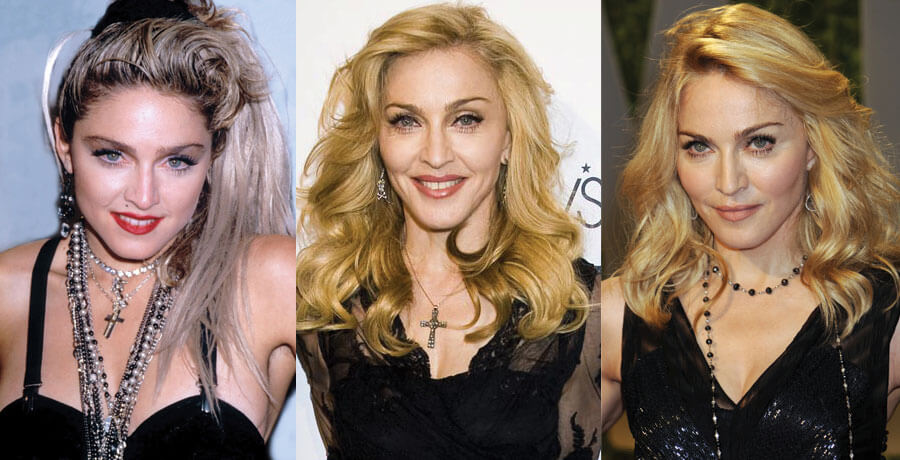 Let us share with you, lip (dermal) and face fillers are simply substances that are injected into someone’s face. With the help of these fillers, people can fill their lines and get rid of wrinkles. In addition to this, they can also add volume to other areas of their face like cheeks and lips.

The media outlet has reported that Madonna’s enormous use of filler could have made it impossible for it to dissolve which may have led to a seemingly over-filled upper face and a narrow lower face.

Did Madonna get butt implants in 2018?

Madonna shocked her fans in the year 2018 with a surprise performance at New York City’s famed Stonewall Inn on New Year’s Eve. During her performance, she sang many songs including her 1989 hit “Like a Prayer” and a cover of Elvis Presley’s “Can’t Help Falling in Love”.

But the fans didn’t talk much about her performance instead they talked about her physical appearance. At that time, they claimed the singer had butt implants or she was wearing padding on stage. At that time, Madonna slammed all the trollers and she took to her Instagram and wrote, “Desperately Seeking No Ones Approval………………😂. And Entitled to Free Agency Over My Body Like Everyone Else!! Thank you 2019 🎉🎉🎉! Its Going to Be an amazing Year!! 🔥🔥🔥! #2019 #freedom #respect #nofear #nodiscrimination”

Then, some social media users went on to say that the Me Against The Music singer may have been holding a microphone pack or wallet in her back pocket.

After Madonna’s appearance at the 2021 MTV Video Music Awards, the rumors about her undergoing the knife began swirling in the air again. Some social media users stated that the singer had a breast enlargement operation as well as butt implants.

During the award show, Madonna showed up in a black bodysuit with matching gloves. She completed her look with a pair of black heels. Then, she modeled a huge cleavage as well as a very round and pert derrière in her black PVC bodysuit. 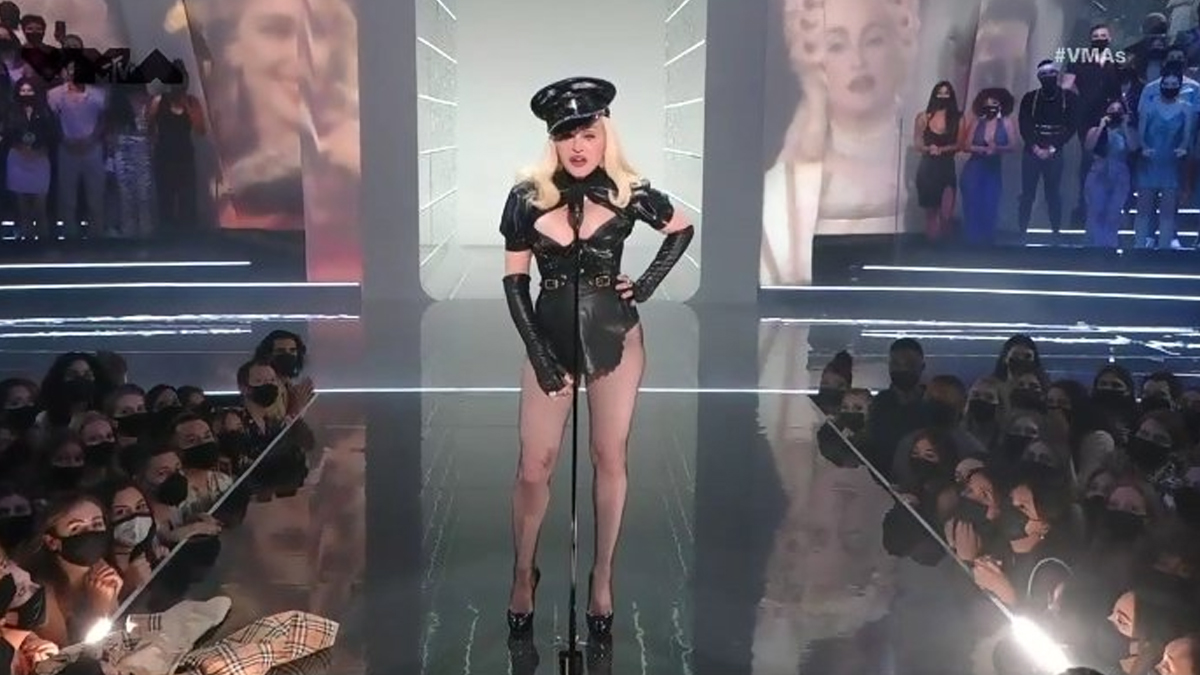 Most people who are in their early sixties have at least a few lines and wrinkles on their faces but the Girl Gone Wild singer Madonna has crystal clear skin even at the age of 64. Her Instagram feed is filled with stunning pictures of her which show her clear and smooth skin. As of now, she has 18.5 million followers on the social networking platform Instagram.

The Bay City, Michigan, native is pretty active on Instagram. She keeps posting pictures of her on Instagram consistently. It seems like at times, she even uses a couple of Instagram filters to take pictures. She gives updates about her life to her fans through social media.

In April 2022, Madonna’s TikTok took the world of social media by storm, fans thought she didn’t look like herself

Earlier this year, in April, Madonna posted a video on the video-sharing platform TikTok that left her fans confused. In the video posted by the rock star, her physical appearance looked different.

In the TikTok video, the Frozen on Fire superstar kept leaning back and forth to the camera. The clip showed the singer as she had her blonde locks in multiple braids and it gave a close-up of her face and large pink pouty lips. For those of you who are unaware, let us tell you, on Sunday, October 9, 2022, the Like a Prayer crooner posted a video of herself on the social media platform Instagram. She simply dropped three heart emojis in the caption of the Instagram post.

In the Instagram video, Madonna can be seen flaunting a pouty lip while showing off her choppy pink hairdo. The video showed the singer’s bleach-blonde eyebrows. Her bone structure looked more heart-shaped than normal. As soon as the netizens saw the video of Madonna, they filled the comments section of the Instagram post with loads of messages. The fans couldn’t stop themselves from expressing their thoughts on Madonna’s appearance.

One user took to the comments section of the post and wrote, “You don´t look like Madonna anymore…. :-(,”  Another user commented, “That isn’t Madonna is it? What happened to her? She looks nothin [sic] like she used to.” A user said, “Halloween came early.”

Followed by a user who put out another question that read, “What has she done to her face? What have you done to yourself

?” A user went on to say, “I’m sorry… but this looks scary. You were beautiful just the way you were. Sad that so many women fall victim to wanting to look 20 forever and go overboard with fillers and surgery.”

Some social media users even compared Madonna’s new look to that of the This Is The New Shit singer Marilyn Manson. A couple of other users thought that the Queen of Pop looked pretty similar to Amanda Bynes and Pete Burns.

Madonna’s fans didn’t hold back and they defended the artist on the social media platform Instagram. They stated that people should be in their own lane, not judge others and mind their own business. One fan of the rock star wrote, “Absurd ppl [sic] criticizing M with 64 old… do you criticize your mother? Bc [sic] she’s mother and have same time of our mothers. Respect and less hate to ladies bc [sic] maybe you never know and probably never will know what love is… ” Another fan of the musician went on to compliment her pink locks and said, “this new hair is wonderful.”

Another defender further added, “The comments give me disappointing vision of life, getting older means that u have to be sad and living a life that u won’t wanna live? Change your opinion about of the years old, let Madonna live her life at the best way! Long live for the Queen!”

Do you think Madonna has got plastic surgery done over the years? Kindly let us know your thoughts in the comments section below. Don’t forget to stay tuned with us for the latest updates from the world of showbiz.