In Vogue’s new video “24 Hours With Emma Chamberlain in Copenhagen”, the 21-year-old star took us along for some sightseeing, shopping, coffee tasting, and fittings before the big fashion show. FYI, Emma was in town for the Ganni show at Copenhagen Fashion Week. Read on to learn all about how she spent her 24 hours in Denmark. 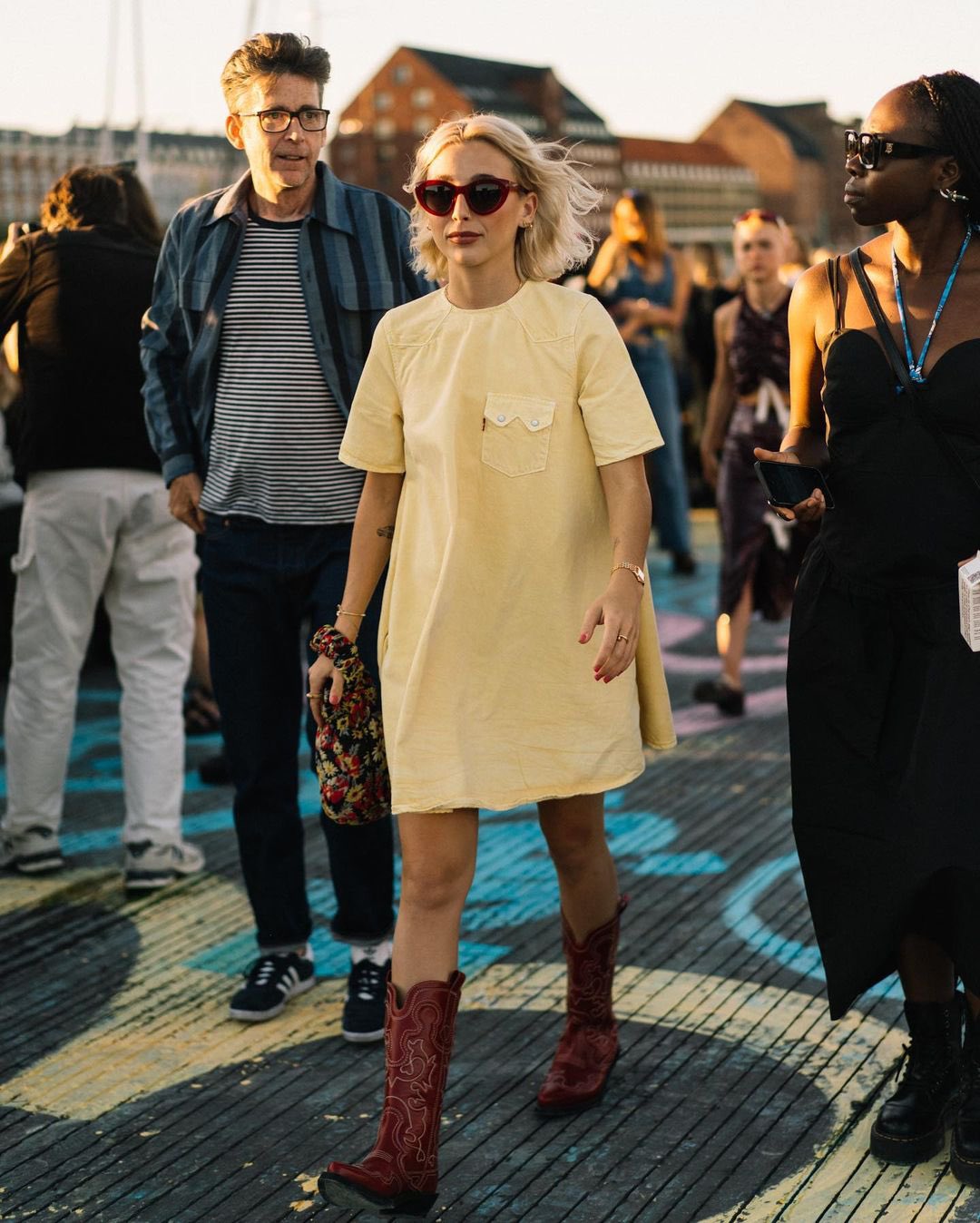 The Day Began Bright And Early… 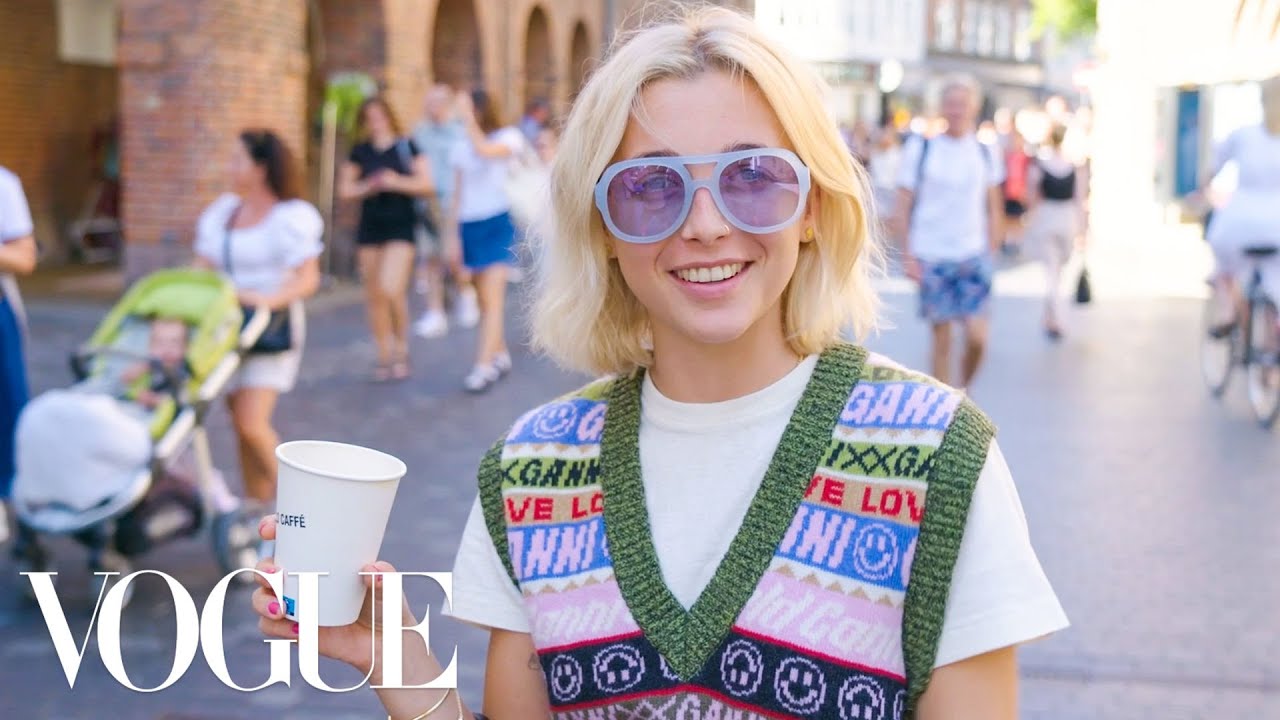 In a recent interview with “Vogue”, Emma Chamberlain was seen speaking about getting makeup and hair done in the bed. She continued, “I promise you, this worked out for everyone. Although, I am kind of loving it, so I might want to continue to do that, moving forward.”

Chamberlain’s day began bright and early at 8:00 a.m., where she greeted Vogue at her hotel room. On her first visit to Copenhagen, she said, “I love this city, it’s so cool,” Chamberlain says. “It reminds me of the East Coast a little bit. I used to go to Maine every summer, and it really reminds me of Maine being on the waterfront.”

As she slipped into Ganni’s colourful sweater vest, she was all set to head out of the door and hop on a quick bike ride to Jerome’s Vintage, for a bit of morning shopping. She said, “I really shouldn’t buy anything today, because I only brought a carry-on.” She revealed that a lot of people in Copenhagen are riding bikes so even she decided to get on one.

About Jerome’s Vintage, Emma revealed that it is one of the best vintage stores. She continued to shuffle through the gorgeous vintage clothes–from brown shades to white–Emma was wanting to pick up almost everything. She said, “I am looking for things that make my brain light up. When you see a piece and you’re like, ooh, what can I do with that? That’s a good sign.”

Pitstop At The Italo Coffee

As a coffee lover (and coffee company owner herself!), Chamberlain needed some morning java—so the next stop on her pre-fashion show itinerary was a pitstop at Italo Cafe, where she got to make her own iced almond milk latte.

This beautiful cafe told me I could come in, and make my own coffee because I am supposed to be a pro because I do have a coffee company, but I am not a trained barista. I’m a home barista. The technique’s different. We’ll see if it translates,” she said. She continued, “First we need to make expresso. We have to bang this out.”

She revealed that she always does a double shot because she doesn’t play around. She said, “Put it here, elbow up, press it, put it in.” She continued, “Oh, I did the wrong one. This is almond milk-based solely on the fact that there is an almond on the front.” Well, she finally made herself a double shot and yea, it tasted “so good”.

She revealed that today she got to finally live the wildest dream of being a barista. She said, “And it’s delicious.” Emma continued, “If you know me, you know this is my favourite fruit,” she said while pointing at the plums. She revealed that they are the most incredible fruits and the ones she was pointing at were surely fresh and great. 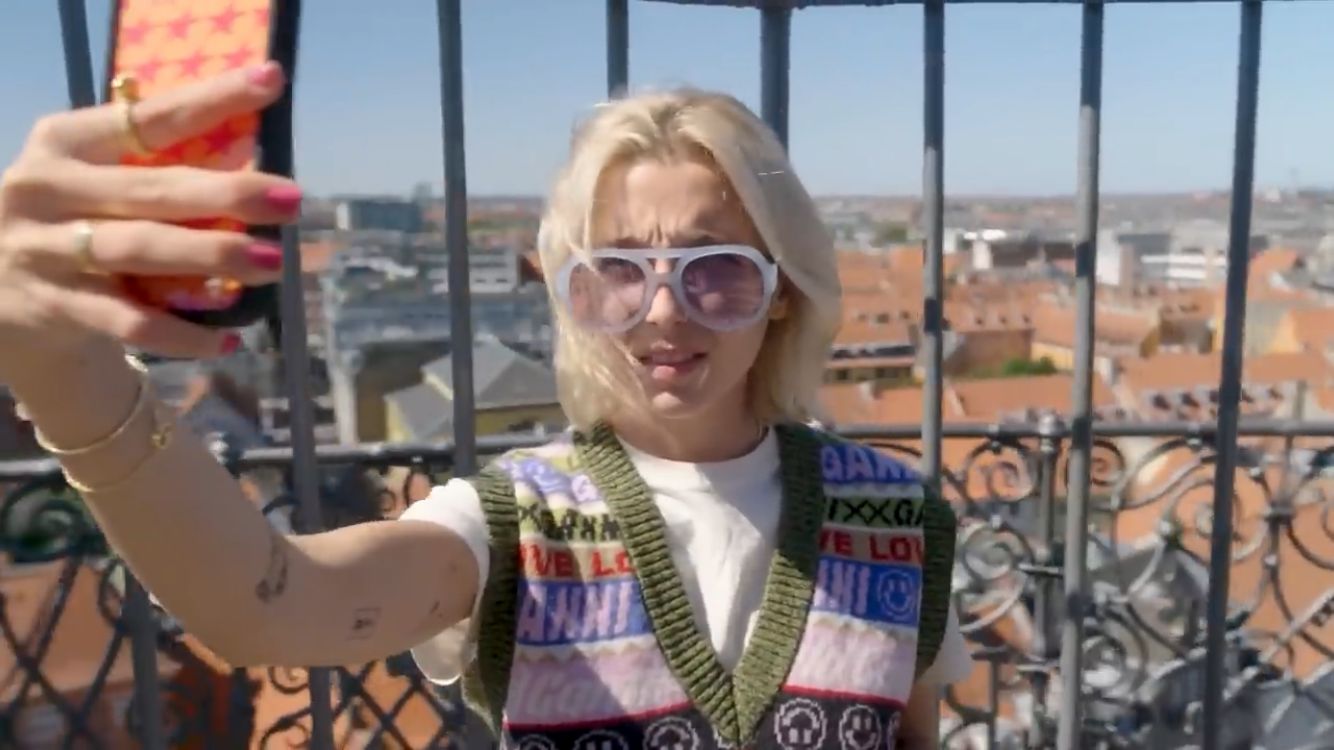 With a drink in hand, Chamberlain then headed to the historic Rundetaarn building for some sightseeing, where she climbed the spiralling ramp to the top of the tower, for breathtaking views of the city. “I’m sorry, I have to take a picture,” she says, snapping a selfie for her mom.

While walking upstairs, she said, “It’s very loud in here. Like this is a workout for sure. I am kidding, this is actually cool but my quads are burning. It’s never-ending. I am jet-lagged. Things are getting narrow. It’s getting narrow in here,” she said while climbing further.

She finally reached the top of the Rundentaarn building and said, “So beautiful”. She expressed, “I love that about places. It’s like the architecture is different. The view is different.  It’s like, yea, Mr Captain Obvious. What I said is obvious, but I am blocking the view from people, so I need to go.”

The Final Stop At Ganni… 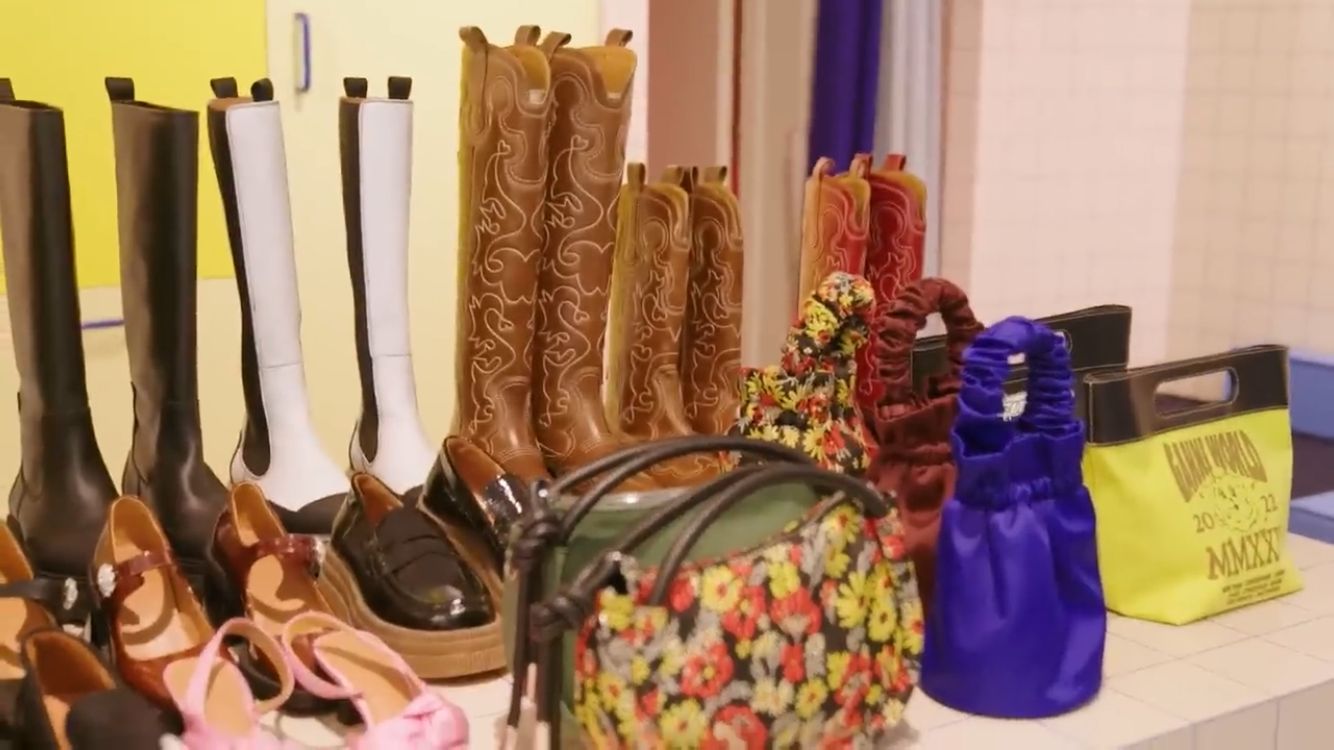 Taking a bumpy ride from the Rndentaarn building, she said, “Riding on these stones, it’s not ideal but finally we are at the Ganni Headquarter. It’s time for a fitting.” While taking a look at the “Fall Winter Collection”, Emma couldn’t stop but stare at the beautiful dresses. There was a cardigan that matched Emma’s Ganni vest.

“I started thrift shopping when I was like 15, and I remember the first thing I wanted to find was a pair of Levi’s—I would always spend so much time in the jeans section,” said Chamberlain. “The way that their denim wears just creates the most beautiful colour and texture.” 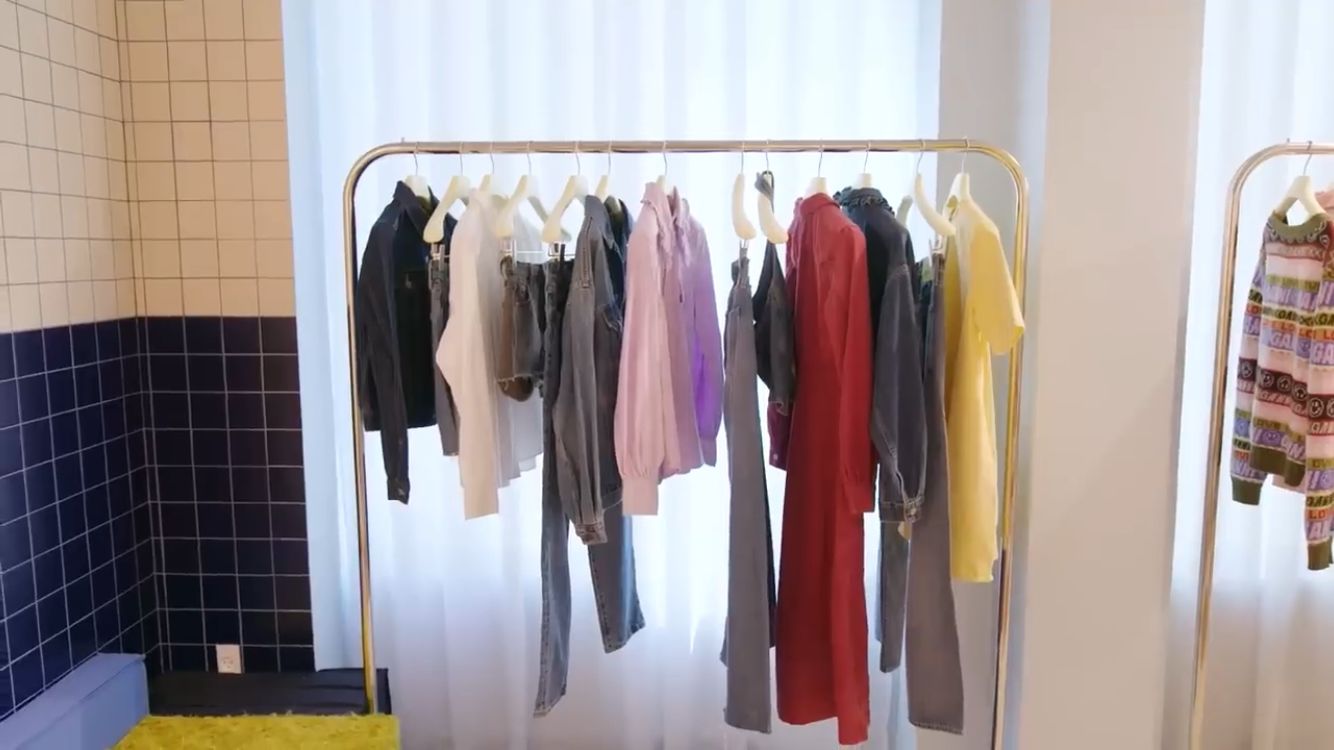 For her show look, she landed on a Ganni x Levi’s yellow smock dress. “It’s my favourite piece from the collection,” says Chamberlain. “I paired it with some red cowboy boots because we had to bring out that little red Levi’s tab even more, and a little bag with flowers all over it—because you’ve gotta stick with the gardening vibe.” Well, Emma surely had a great time in Copenhagen. Are you planning a trip next?