Christina Aguilera is a force in the music industry and she is often called the “Voice of a Generation”. She is most noted for her four-octave vocal range, use of melismatic singing, and ability to sustain high notes.

The singer shot to fame in the late 90s. Some popular songs of Christina include Genie in a Bottle, What A Girl Wants, Fighter, Can’t Hold Us Down, and Come On Over Baby (All I Want Is You). Apart from being a musician, Christina is also an actress and television personality. She has served as a coach on the talent competition show, The Voice for six non-consecutive seasons.

In addition to this, Aguilera also had a guest appearance in the drama series Nashville (2015). She made a comeback to music in 2018 and received good feedback for her 2 albums: Liberation (2018), and her Spanish-language album, Aguilera (2022).

Over the last couple of years, many of her fans have wondered whether Aguilera underwent cosmetic surgery to improve her looks. Read on to find out the answer to the above question.

Did Christina Aguilera get plastic surgery?

According to experts, Christina has had some work done on her face. It has been reported by The Things, in 2015, Dr. Lyle Black told Hollywood Life, “She’s had another re-do rhinoplasty, but this was done very well.”

Dr. Lyle told the media outlet, “Cartilage grafts were used to rebuild, support and fill out her nose quite artistically. Her previous nasal surgery was way overdone and her nose was nearly whittled away.” As per Fabbon, another surgeon also stated that the Something’s Got a Hold on Me singer has had Botox, cheek fillers, lip fillers, jaw contouring, and breast implants. Triple Board Certified Plastic Surgeon Adam Schaffner, said that the musician’s puffier face was probably a result of makeup, fillers, or lighting. The surgeon told Radar, “Christina may have the appearance of fuller cheeks due to increased volume from fillers such as Voluma or Restylane Lyft.”

Dr. Norman Rowe said, “I believe that Christina’s puffiness can be attributed to overfilled facial fillers, like Bellafill or Voluma.” He went on to say, “She probably tried to fill out any wrinkles and give her face some youthful fullness. Unfortunately, she was overfilled with fillers in the cheek area, and they weren’t placed in the optimal area. Her fillers should have been injected more on the cheek bone.”

In July 2022, the Grammy winner posted a series of pictures on the social media platform Instagram. In the photographs, she can be seen flaunting her flawless makeup. Although, after taking a closer look at the photos, some of her fans assumed that she underwent cosmetic alterations.

At that point, one social media user wrote, “I feel like there’s a fine line before these celebs start all looking like lil Kim after the surgery [sic],” meanwhile another user went on to say,  “What happened to your face?”

Followed by a user who stated that the singer looked similar to a member of the Kardashian-Jenner family. The Kardashian clan is famous for their transparency about plastic surgeries. The user penned, “Christina Kardashian” 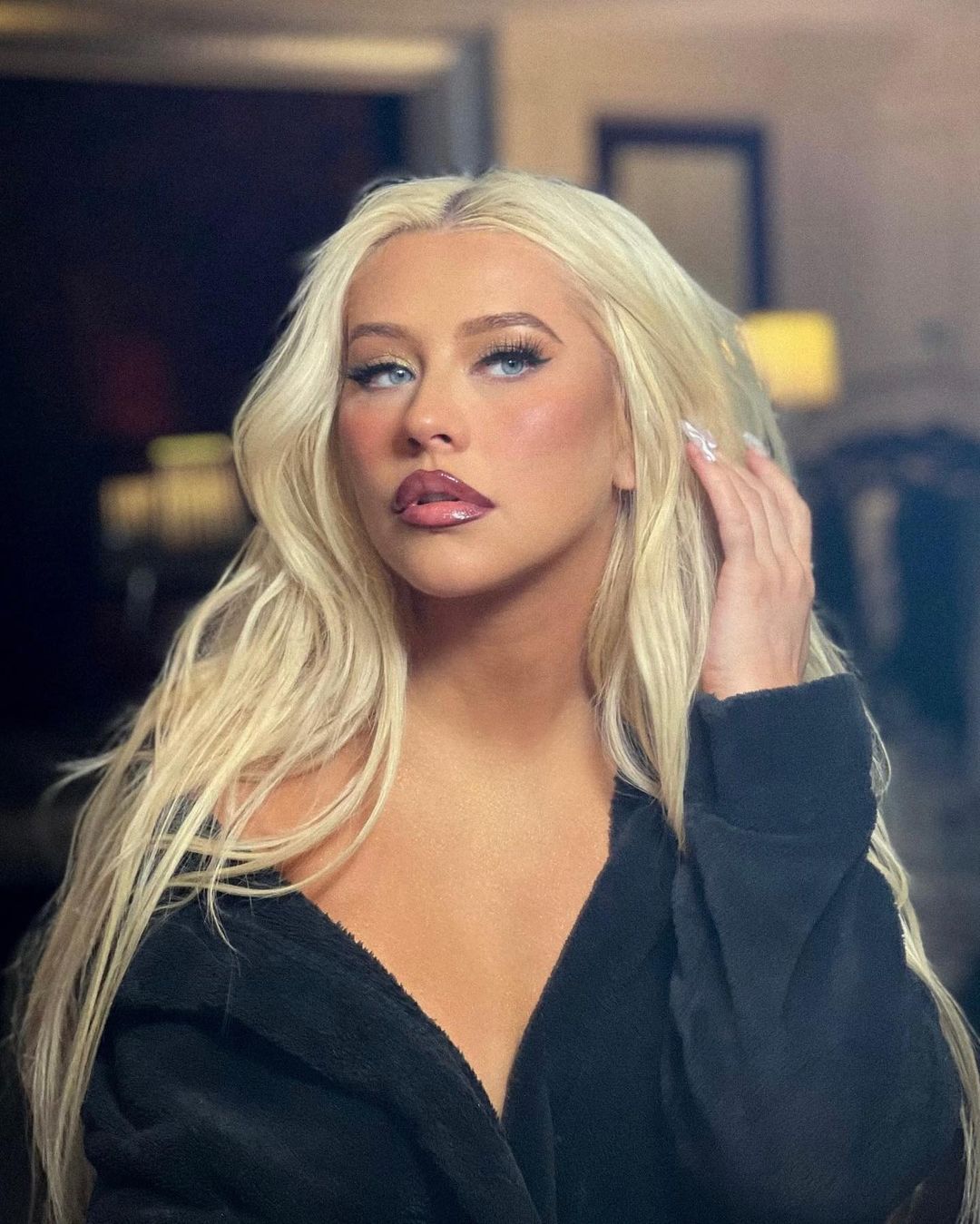 In the year 2017, fans noticed that Christina had plumper lips during her tribute performance to Whitney Houston at that year’s AMAs. Back then, a fan tweeted, “Christina is the last person on the planet who needs plastic surgery. I wish she’d calm down with all the fillers and injections.”

Another user defended the singer and wrote, “You just need to be respectful,in a few years her kids might read your stupid tweets, you want to make them feel sad? No? Then be respectful! Don’t be so dramatic about some lip fillers, they’re temporary.”

As of this moment, Christina has not made an official comment on the plastic surgery speculations floating in the air. However, she has talked about her skincare routine and makeup usage in the past.

What did Christina Aguilera have to say about body image pressures?

During a September 2018 interview with Cosmopolitan, the Fall in Line songstress  confessed she “would never have dreamed of doing an interview without makeup on” in the early days of her career.

At that time, Christina went on to say, “I still love ­getting glammed up, but I want to show imperfections on this go-round.” Keeping aside facial beauty, she also spoke about managing body image pressures to the outlet in a different interview. The Reflection singer told the media outlet, “I think we all have our good days and our bad days in how we feel about ourselves. Entering this business, I hated being super skinny. Once I turned 21, I started filling out a little bit, and I was loving my new curves. I appreciated having a booty. … [But] I have a hard time looking at the early pictures of myself because I remember feeling so insecure.”

The mom of two stated that she wants to set an example for her daughter Summer Rutler, in terms of self-perception. She shares her daughter with her fiancé Matthew Rutler. She also a son named Max Bratman, from her previous relationship with ex Jordan Bratman. The Staten Island native further added, “I am really careful if my daughter is there when I am doing photo shoots. I want to make sure that when she sees Mommy in hair and makeup that she realizes that’s not what’s important.” She also mentioned that she prioritizes telling her fans and kids that true beauty is on the inside.

Later on, in an interview with Paper, the Ain’t No Other Man singer said, “I’m a performer, that’s who I am by nature. But I’m at the place, even musically, where it’s a liberating feeling to be able to strip it all back and appreciate who you are and your raw beauty.” She continued, “I mean, I’m a girl that likes a beat face, let’s not get it twisted.”

Do you think Christina Aguilera underwent the knife to enhance her looks? Kindly let us know your thoughts in the comments section below. Don’t forget to stay tuned with us for the latest updates from the world of showbiz.