Chrisean Rock has added another tattoo to her body! The Word to my Brother singer has got a new tattoo of Blueface nearly two weeks after revealing that she’s single. For those of you who are unaware, let us tell you, it is her seventh tattoo dedicated to the American rapper.

By now, all the fans of the pair, are very well-versed with their romance so this new tattoo of Chrisean Rock wouldn’t come as a shock to them. Every now and then, both Chrisean and Blueface have publicly talked about their relationship and its ups and downs of it. Read on to see her new ink. On Tuesday, Chrisean Rock took to her Instagram and shared a video that left her fans puzzled. The video displayed Chrisean with new ink. The clip has been deleted from the social media platform now.

The video was also shared by The Shade Room and it showed Blueface’s face in black ink. “I got all 7 now,” she wrote alongside the video. As of this moment, she has a total of 7 tattoos dedicated to the rapper. The fans expressed their thoughts on her new tattoo.

One user wrote, “Chrisean rock really went and got another blue face tattoo on her neck & his name on her face.. omg lmaooooo,” meanwhile another user added, “Not Chrisean Rock got a new tattoo of blue face on her neck 🤦🏽‍♀️.”

Followed by a user who penned, “Mark my words, watch chriseanrock do an interview after she miraculously is done with BF saying how she regret getting all them dumb ass tattoos of him. Like 7 sis really? 1 really wasnt enough? Idk to each they own but that shit just dont sit right w me knowing they toxic ash🤢.”

Earlier this month, Chrisean Rock claimed she was single

In the past, Chrisean has gotten many tattoos of the Holy Moly rapper which are either his portraits or scripts of his real name, Johnathan Porter. On October 3, she took to her Twitter and wrote, “Y’all can have him . ChriseanRock is single. Chrisean you are enough.”

In a separate tweet shared on October 18, Rock penned, “I chose to stay with him for all the things that he had done right and not to leave him for the one thing he had done wrong. Vise versa.”

I chose to stay with him for all the things that he had done right and not to leave him for the one thing he had done wrong. Vise versa

Chrisean Rock has a tooth tattoo of Blueface

Yes, you read that right. Nearly 3 months ago, Chrisean filled the gap between her teeth with a tattoo of Blueface. Soon afterward, she posted a video on the social networking platform Instagram.

In the video, Rock can be seen smiling while showing off her new tooth tattoo that has the rapper’s face inked on it. “I did it for you Daddy blueee,” she wrote in the caption of the video. 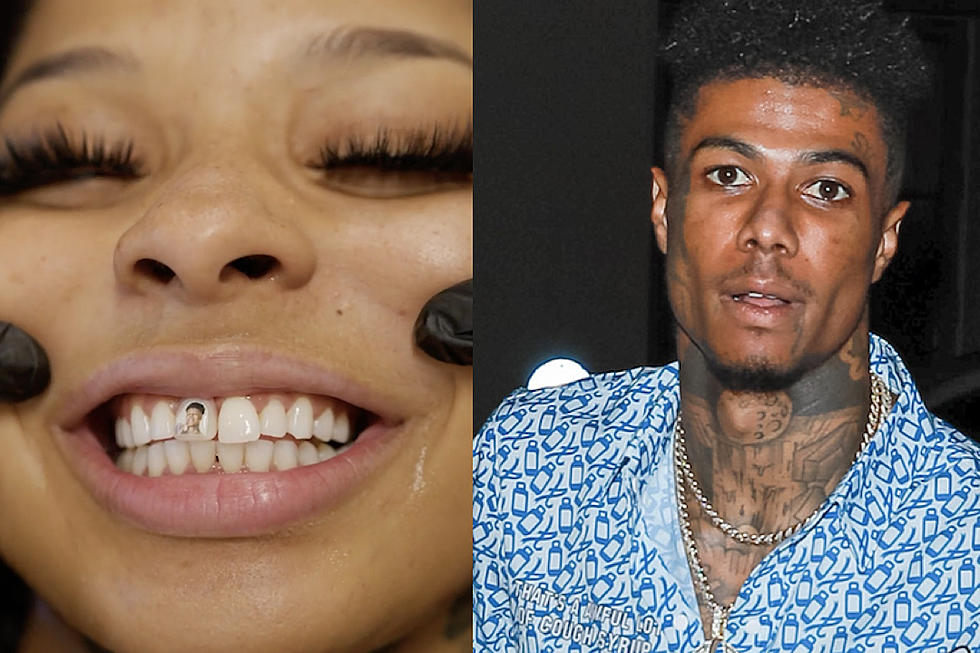 Almost 2 days before unveiling her tooth tattoo, Chrisean Rock posted a few pictures of herself and Blueface on social media. She simply captioned the slideshow of pictures, “I’m stepping for him on anything.”

Did you like Chrisean Rock’s new tattoo? Kindly let us know your thoughts in the comments section below. Don’t forget to stay tuned with us for the latest updates from the world of showbiz.