10 Most Fashionable Looks of Emily from ‘Emily in Paris’

Paris is the fashion capital of the world, so when Emily goes there, she’s sure to dress the part.

Emily in Paris is a series starring Lily Collins and directed by the same person who brought us the Sex and the City series. It’s the story of a Midwesterner from the United States who moves to Paris and experiences culture shock.

She struggles with being the new girl at her work and in a foreign country during her time in Paris. The series is romantic in nature. The show has already drawn criticism from several people for portraying a skewed and out-of-date depiction of Paris.

We have discussed everything about this show, from Emily’s humorous French to her falling in love with her friend’s boyfriend. But it appears that there is still time to discuss Emily’s clothing.

Do you want to recreate Emily’s outfit? We’ve got you covered. Continue reading for some style advice and new outfits to add to your wardrobe.

Emily wears a button-up top with a Parisian scene. Including the Eiffel Tower, when she first arrives at her office. It’s a sardonic reference to her starry-eyed optimism about the city of lights.

And it immediately informs her new coworkers about the type of person they’ll be dealing with. Well, we think this was the perfect outfit for the first day in a Paris office. 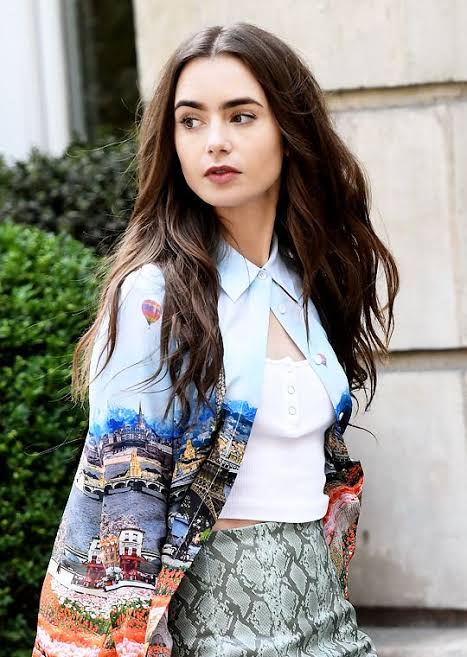 Emily attends a benefit to collect money for the American Friends of the Louvre AFL in the penultimate episode of season one and persuades designer Pierre Cadoux to contribute a dress for the charity auction.

Emily has to take the place of the woman who was scheduled to model the gown when she fails to arrive. Of course, avant-garde designers’ grey space ends up wreaking havoc on the situation and turning the dress into something of an artistic statement.

Behind the scenes, this sculptural white gown was actually designed by Stefan Rolon. 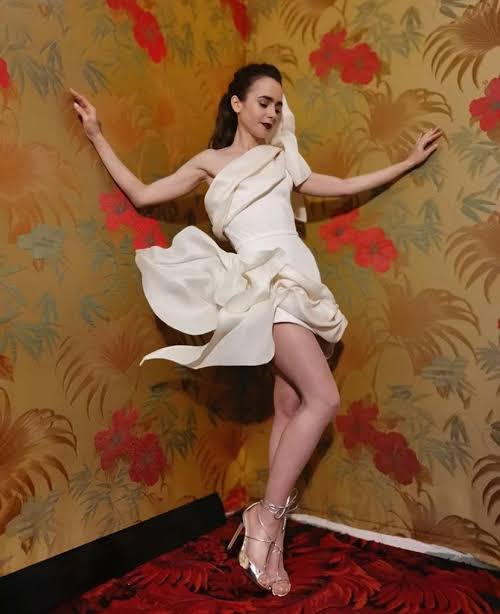 In the first episode, when Emily ventures out to attempt to order pastries, and ends up meeting Mindy in the park, she wears a printed gany top and Maxi Skirt.

The yellow printed ensemble looks like a dress because it’s paired with a thick black belt, but it’s actually made up of a silk camisole style top and a separate skirt.

Without the belt, the outfit would be a bit too breezy for Parisian fashion. But the darker element anchors it, adding a slight edge to an otherwise sunny look. 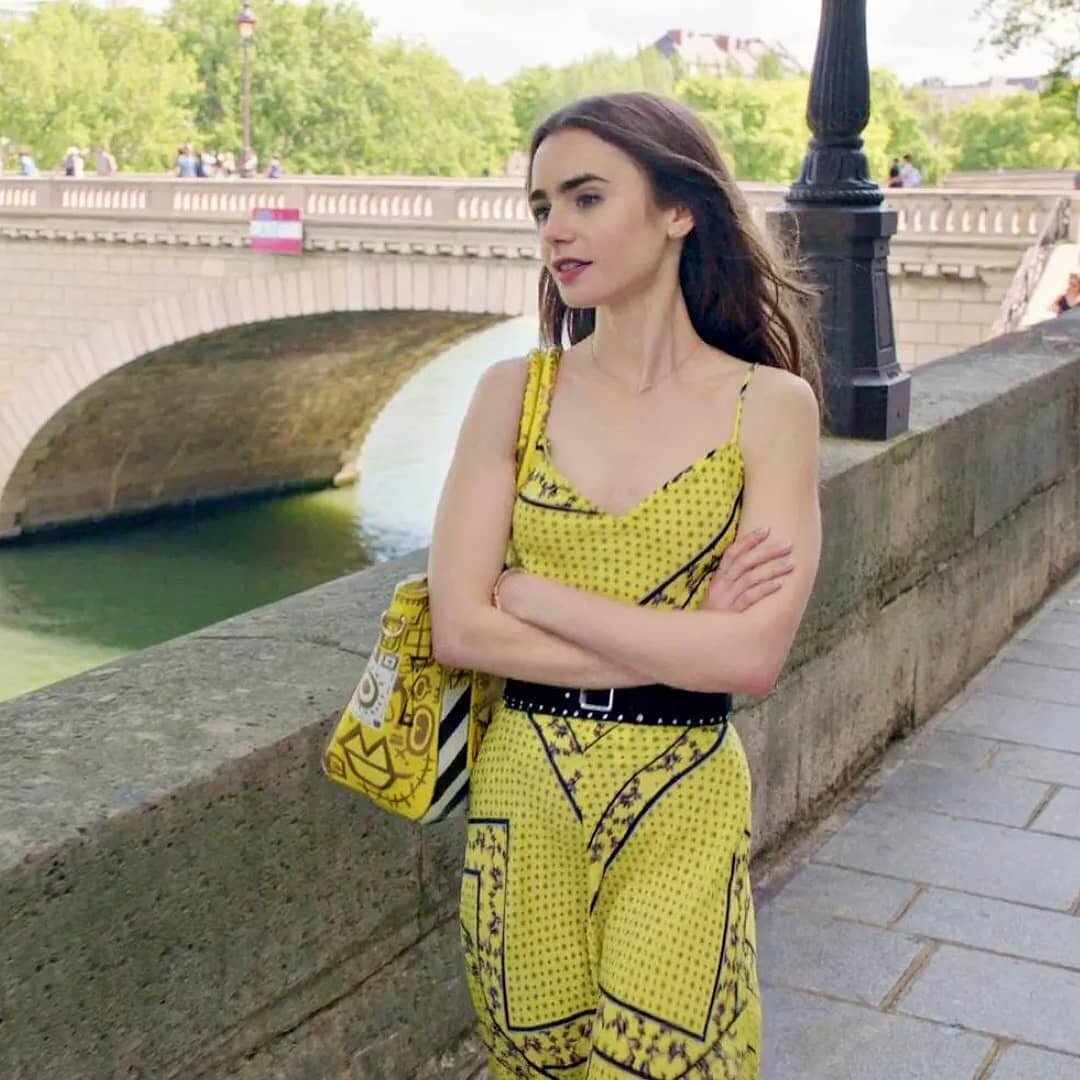 By the midpoint of the show, Emily has become a full-fledged social media influencer due to her Emily and Paris account and she has the wardrobe to match.

When working on a campaign for a Swedish bed company Heston’s, Emily comes up with the idea to showcase the company’s products in famous locations around Paris.

While lounging in the public bed display, she wears a multicolor ensemble with a focus on light purple. She pairs an Alto cropped sweater with decorative buttons with a leather ankle boot in the same shade by Dora Tamer. 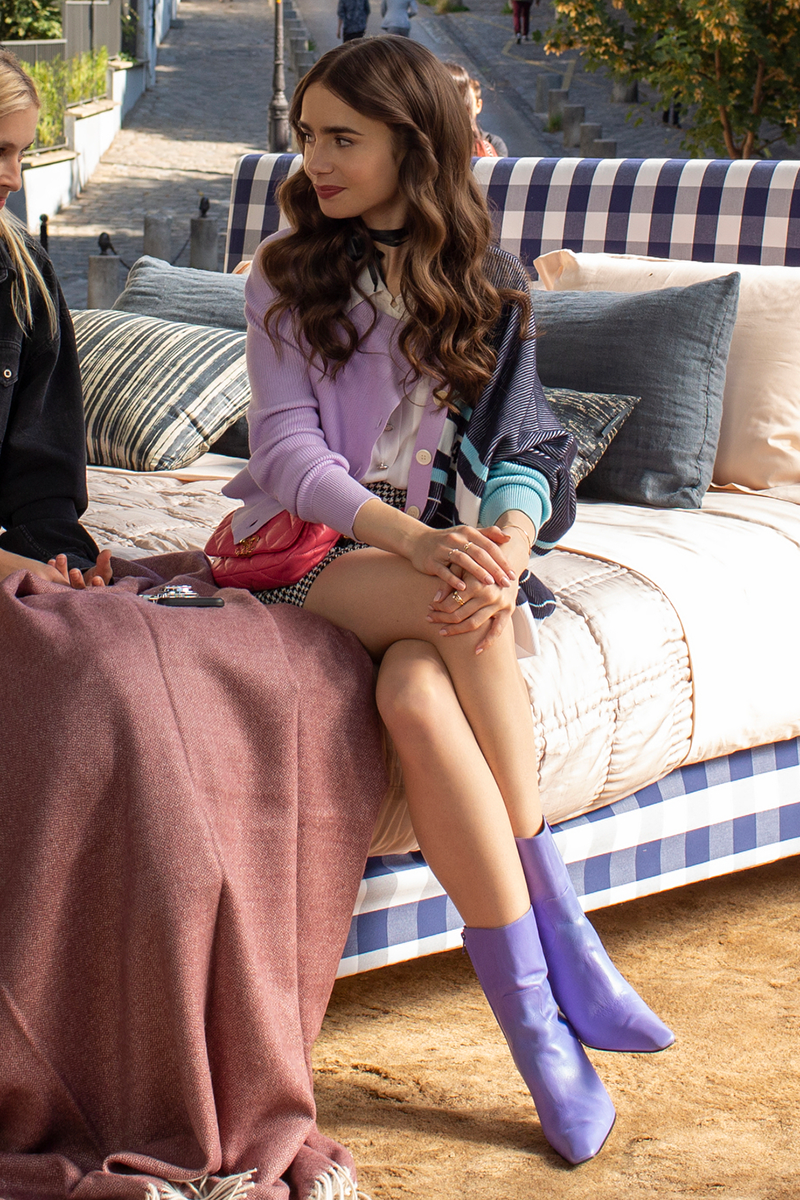 Fieldset of her outfits on the show quoted, that every girl always wants their wardrobe picks to be original and interesting. We believe these two features create classics that last through the years as opposed to trendy and gone tomorrow.

While shopping for flowers in her around smell, Emily first meets Kami who tried to help her negotiate with the difficult shop owner. During this scene, Emily is wearing a bright fuchsia coat by Kenzo that goes perfectly with the rosy bloom she purchases.

The coat is a wool-cashmere blend that is probably just the thing for a chili Parisian morning. 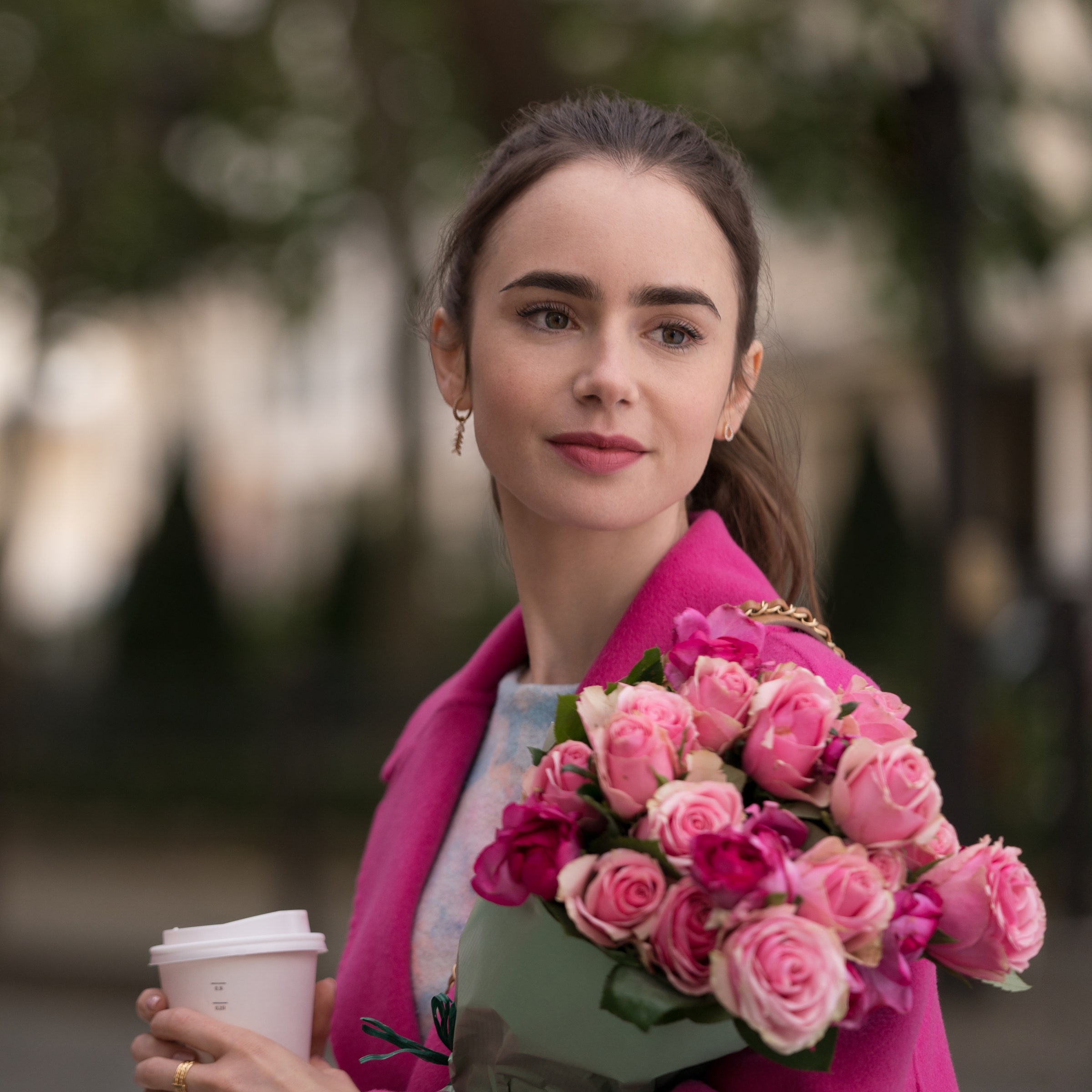 Many are making comparisons between Emily’s wardrobe and the clothes worn by Carrie Bradshaw in Sex and the city, particularly in the two-part finale which takes place in Paris.

Perhaps, the most reminiscent dress is this voluminous tool outfit that Emily wears to an event in the show’s second episode. It’s no wonder that she catches the attention of perfumer Antoine Lauber. Patfield even acknowledged that this particular look was a direct reference. Saying a quote to Emily’s black Tool skirt in episode 2 is an homage to Carrie’s tool skirt in the series finale of sex in the city.

One of Patricia Field’s favorite looks from the show was seen in episode three when Emily attends an advertising video shoot for perfume.

She wears plaid shorts and blazer combo by Veronica Beard with a Chanel Lambskin flat bag, she tops it off with a classically Parisian red beret.

Fieldset of the outfit quote as Emily spends time in France, she mixed in a little bit of Paris to her wardrobe. This is the sort of look that everyone imagines themselves in during their Parisian fantasies. 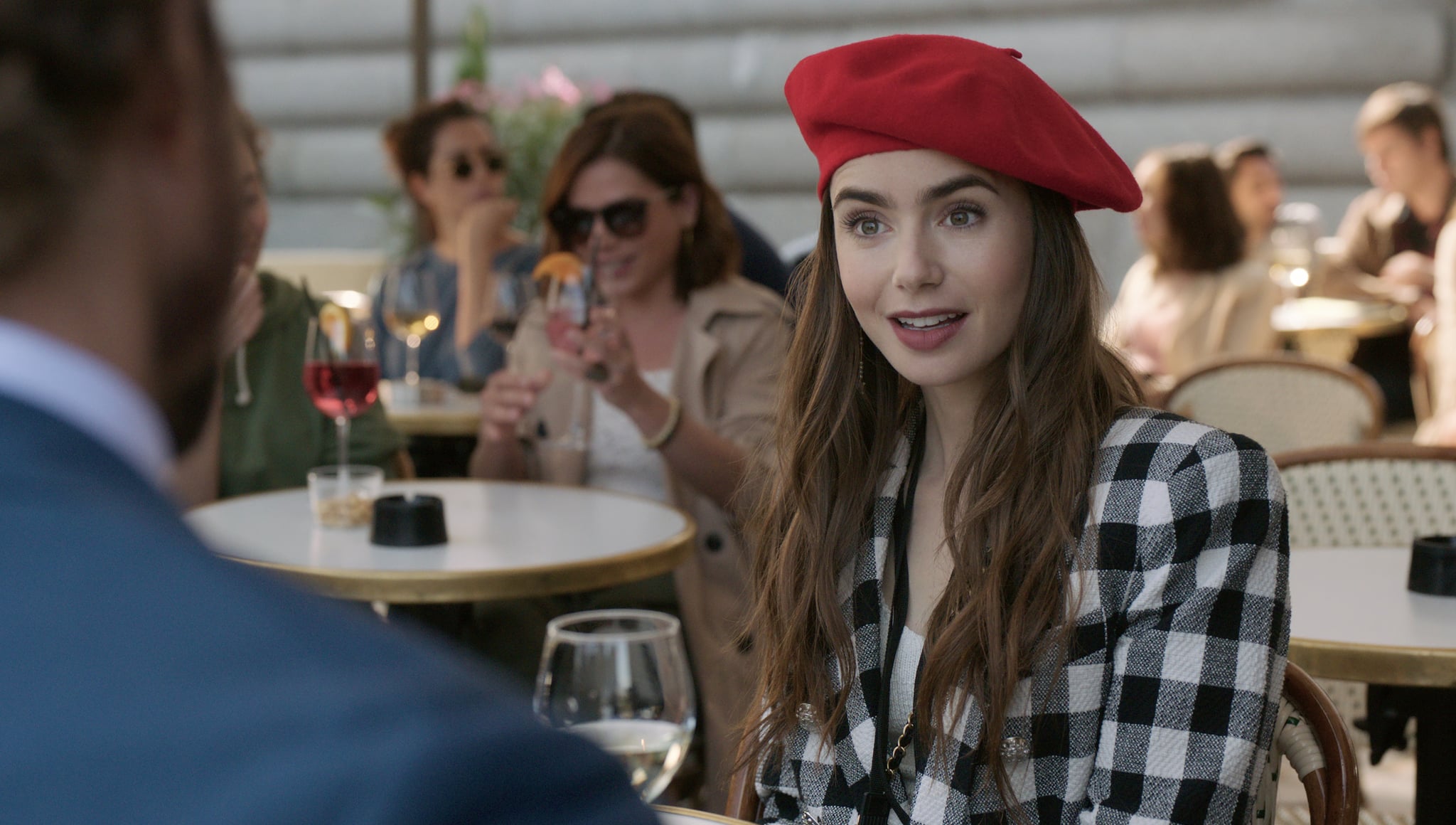 8. Emily’s Black Off The Shoulder Dress

In the show’s sixth episode, Emily attends the ballet with her new bow Toma and wears an epic outfit for the occasion. Her classic little black dress features plenty of volumes and is paired with a dainty headpiece that gives the look a unique spin.

For this scene, Field wanted to pay direct homage to silver screen Audrey Hepburn because of actress Lily Collins’s resemblance to her. 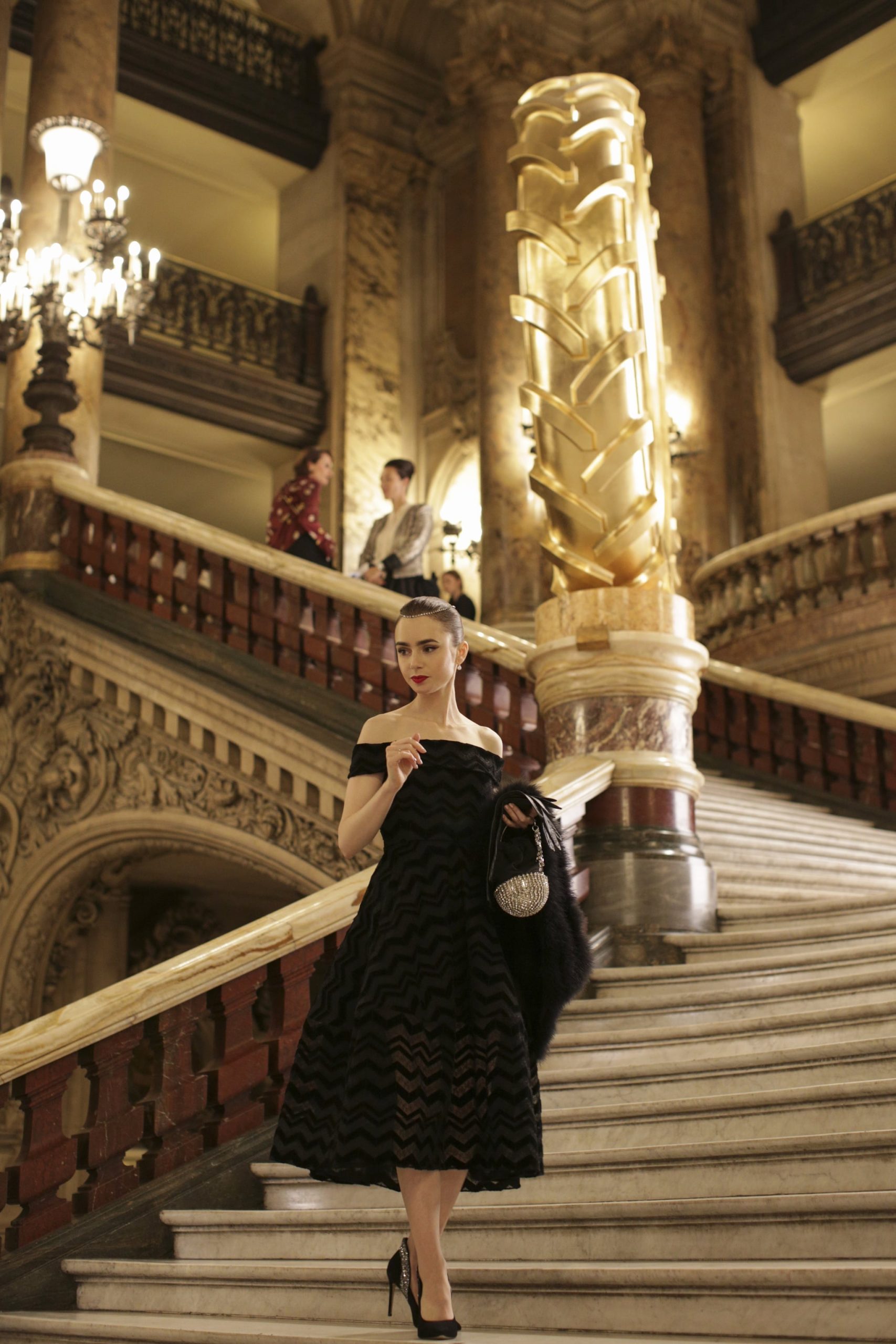 She said quote, “So when she goes to the ballet it was the right opportunity for me to do that, I was worried people are going to say, oh! she copied Audrey Hepburn, but I couldn’t resist it.”

This time in Paris, it’s a cool fun outfit with bright colors. Emily looked too cute to discuss the fact with Camille that none of them will date Gabriele.

Emily Cooper donned a black checkered t-shirt with a yellow blazer, and to complete the look, she added a multicolored miniskirt. Not to mention her purple high-heeled boots. 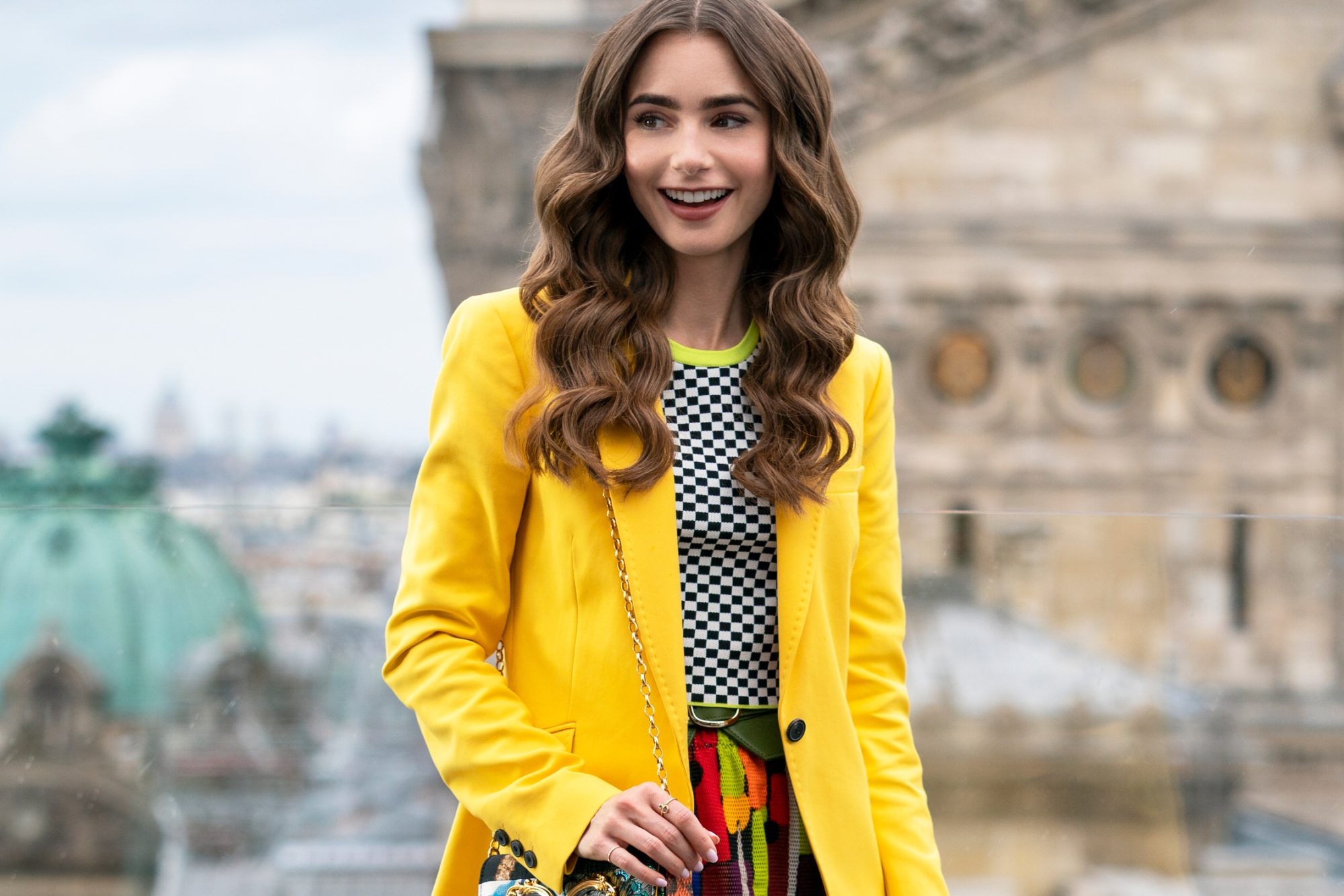 We must admit, Emily looks incredibly gorgeous in pink. As she knows how to match and make her ensembles absolutely charming by adding tiny things, such as this one.

This attire is complete with a turtleneck top inside and a pink and purple mixed long coat outside, as well as light pink boots and a slingback. 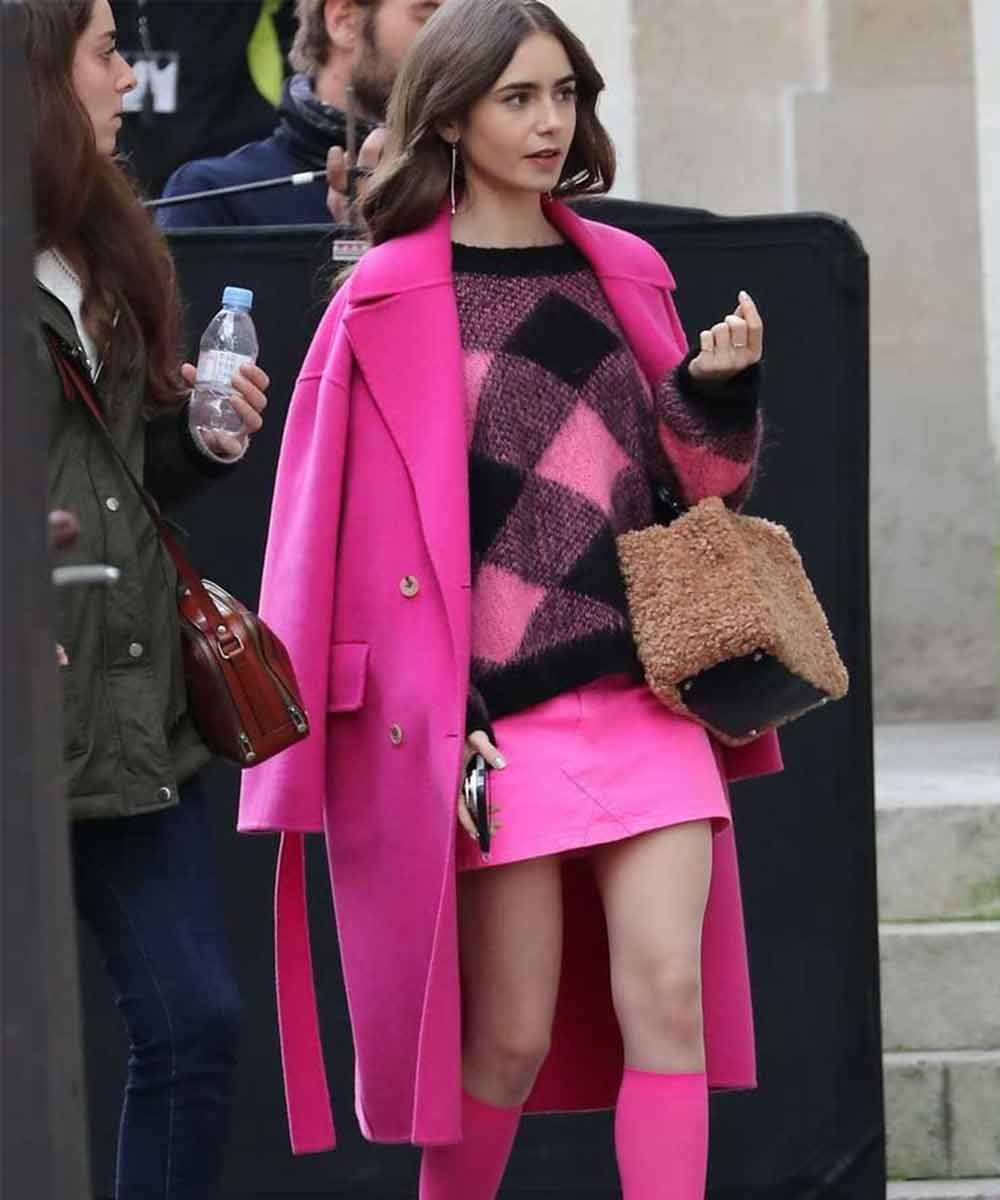 Have you seen this Netflix original series Emily In Paris? Perhaps we’ve overlooked any of her other best outfits; if so, don’t forget to let us know in the comments section below.