10 Most Expensive Bugatti in the World

For more than a century, Bugatti’s automobiles have been known for their beautiful design, advanced engineering, and great performance. Bugattis were the prized possessions of gentleman racers, but they were also the preferred mode of transportation for the world’s elite. At an auction in 2020, the most expensive automobile ever sold was a 1934 Bugatti Type 59 Sports once owned by King Leopold III of Belgium. 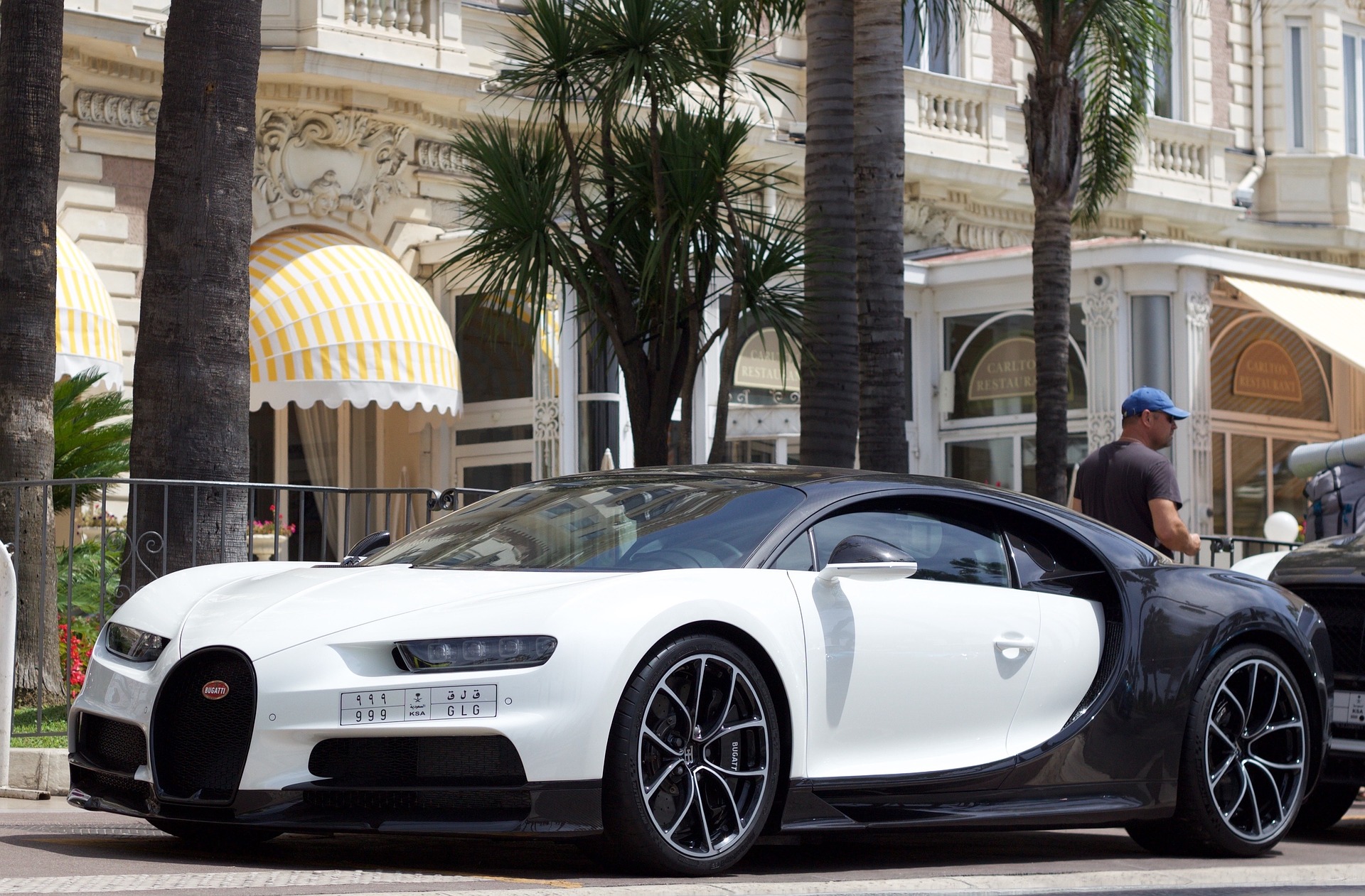 As a result, modern-day Bugattis are among the most costly automobiles on the market. A new Centodieci with a price tag of over $12 million is an example of one such masterpiece. In this article, we’ll mention the Top 10 most expensive Bugatti in the Market.

Top 10 Most Expensive Bugatti in the World

We all know that Bugatti’s are among the most priced super-cars out there. But do you know which one of these is the costliest? Let’s have a look at them by order. 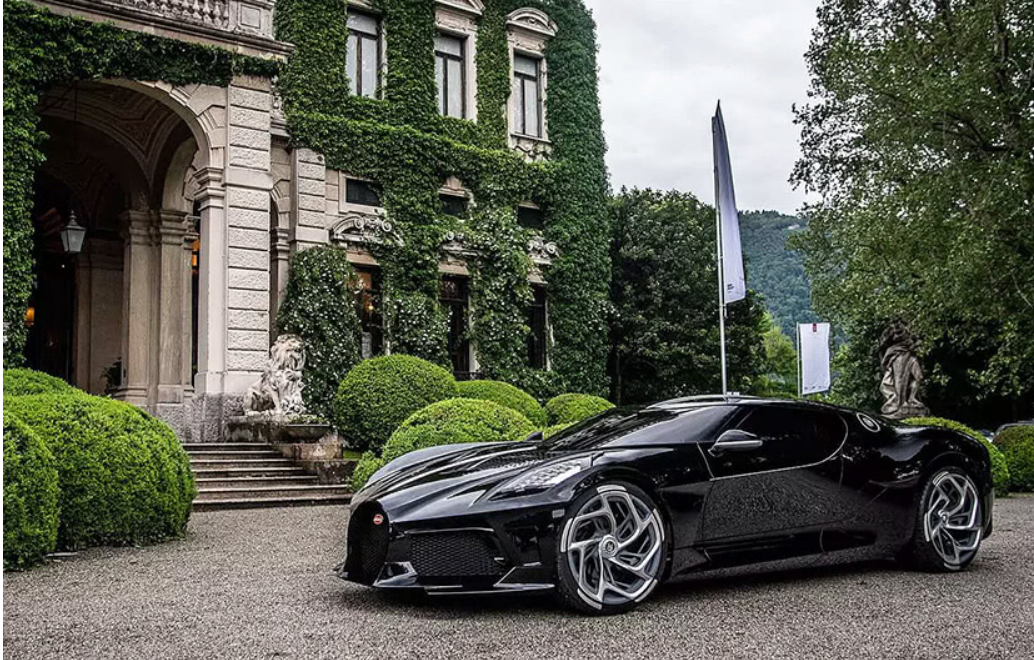 La Voiture Noire, according to Bugatti, is the most expensive new automobile ever sold and only one was produced. The “black vehicle” is a one-of-a-kind hypercar that blends speed, technology, luxury, and beauty into something so spectacular that words fail to do it justice. In the eyes of vehicle enthusiasts, La Voiture Noire is an haute couture for automobiles. Handcrafted from carbon fiber, its clean, timeless design sets it apart from the rest of its competitors.

La Voiture Noire pays tribute to the art deco style of the Type 57SC Atlantic, one of the best vintage vehicles in the world. It’s a striking vehicle with 1,500 horsepower that serves as a remark about the Bugatti brand’s aesthetics. 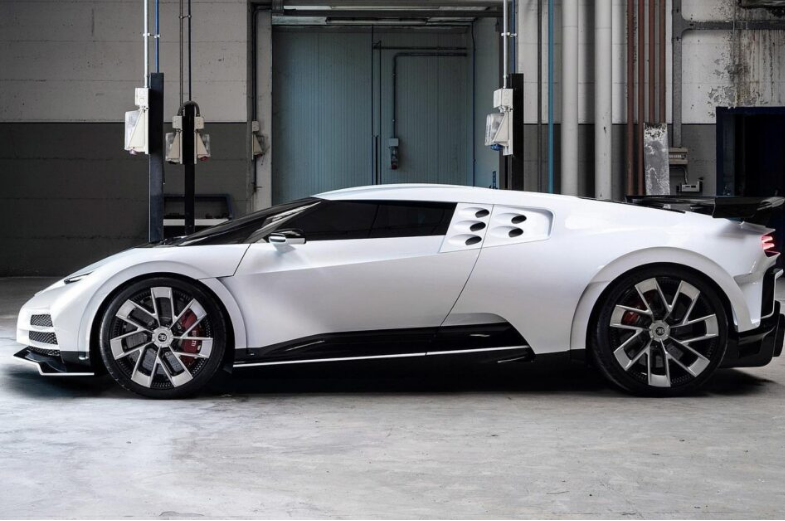 Centodieci is a tribute to Bugatti’s first 110-year-old sports car—the iconic EB110—and a commemoration of Bugatti’s 110th birthday. The Centodieci is based on the Chiron, but it’s lighter and has a reworked body, making it one of Bugatti’s most costly models ever. Only ten vehicles were made, entirely by hand at Bugatti’s Molsheim, Alsace, facility. In Bons-en-Chablais, France, there is a spot for one of the tens available.

Bugatti Divo is one of those cars which rightly justifies its price tag. It’s a piece of art on the road with its 1,500-horsepower and speed that make us rethink the rules of physics. It is also based on the Chiron model of Bugatti.

The more modern design language of the Divo results in a car with a far faster top speed than prior Bugatti models. One of the fastest supercars on the market can reach 380kph (236mph) electronically controlled and can accelerate from zero to 100kph in under 2.4 seconds. 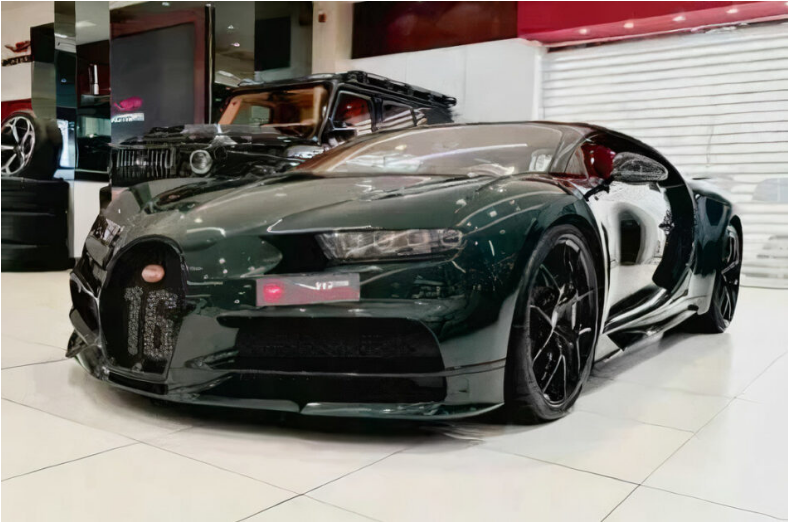 In 2019, Bugatti debuted Chiron Sports, a more sport-oriented variant of the Chiron. Chiron Sport’s powertrain is virtually unchanged from the normal model, although it is lighter, stiffer, and more aerodynamic than the standard model.

In Dubai, this Chiron Sport is on display with a complete set of accessories and less than 1,000 kilometers on the odometer (621 miles).

Luxurious: dipped in Hermès paint, covered in cashmere fabric, and completed with one-of-one emblems and an “H” horseshoe grilled on the front of the car. It is said to have taken four years to build this handcrafted supercar, and the completed product is exquisite, simple, and opulent. 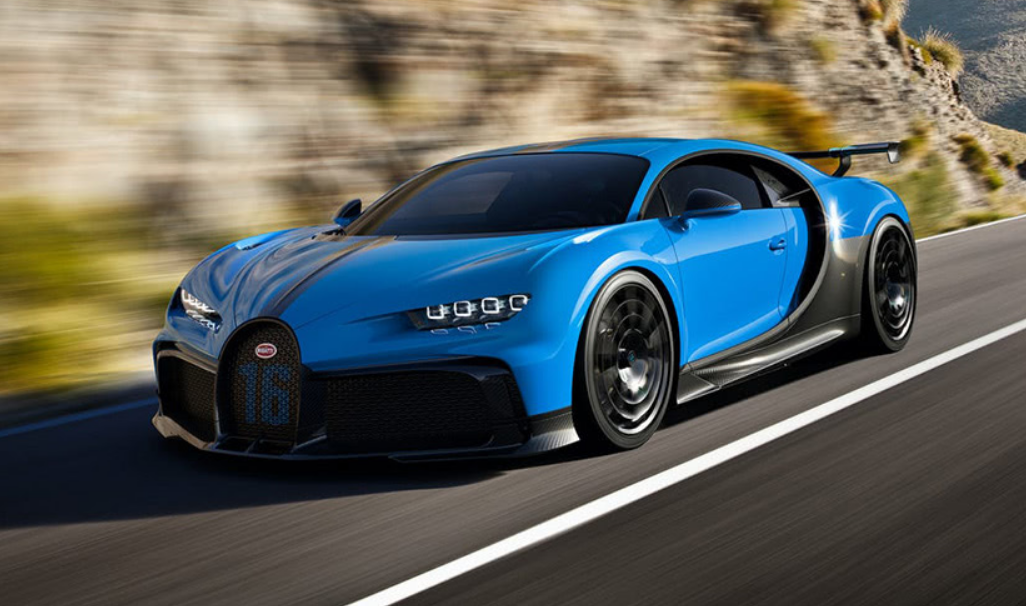 The Bugatti Chiron Pur Sport can be summed up in one word: “pure perfection”. This radical version of the original Chiron may be the first supercar to brag about purposefully being slower. “Slower” is a relative term, given that this model is capable of gliding at a speed of 350 kilometers per hour (218mph).

Even though it’s designed for handling, the Pur Sport isn’t a track vehicle. It’s a fast and nimble vehicle with excellent optimization and the ability to make turns without reluctance. 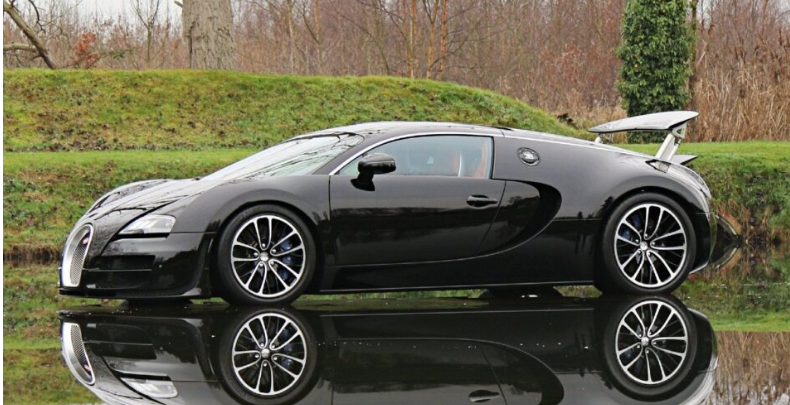 With an 1184 horsepower engine and a peak speed of 431.07 km/h, it’s the most powerful and fastest variant of the original Veyron (267.856 mph). When it was debuted, it was the fastest production automobile in the world, and only 30 were made.

Located in the United Kingdom, this SuperSport has black and orange leather inside with visible carbon fiber. Optional features include black-painted wheels with a polished surface, mirror finish on the center mesh, and blue brake calipers as well as black gasoline and oil filler caps. 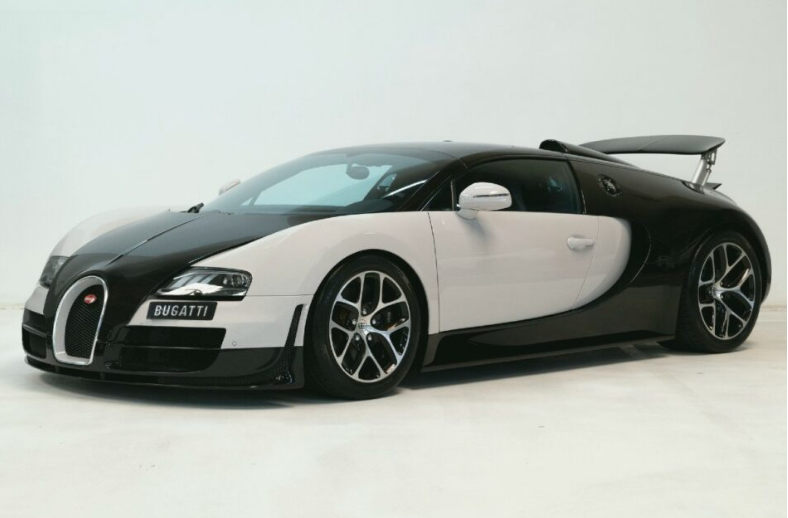 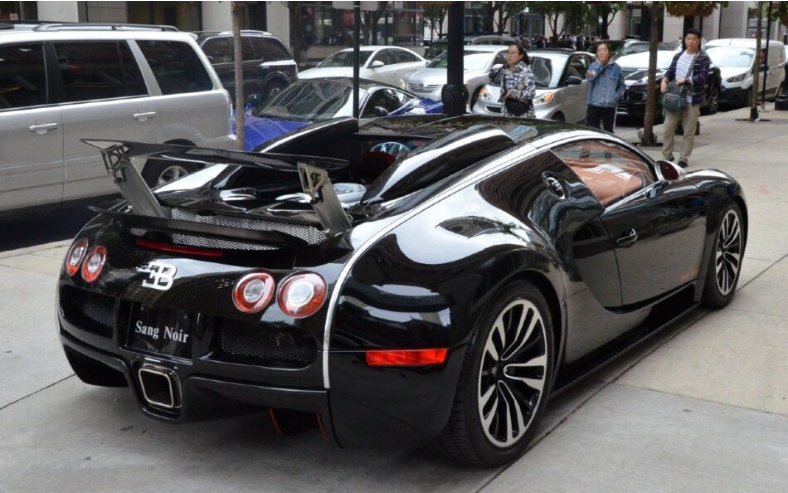 Veyron was the first Volkswagen-era Bugatti to go into production in 2005 and went on to be made until 2015. The Veyron was the world’s fastest production car when it was debuted, powered by a quad-turbocharged W-16 engine.

In all, just 450 Veyrons of all sorts were manufactured by the Bugatti. And there are only 12 Bugatti “Black Blood” or “sang noir” variants. The hood and canopy of the Sang Noir are made from exposed carbon fiber, a nod inspired by the iconic Type 57S Atlantic. 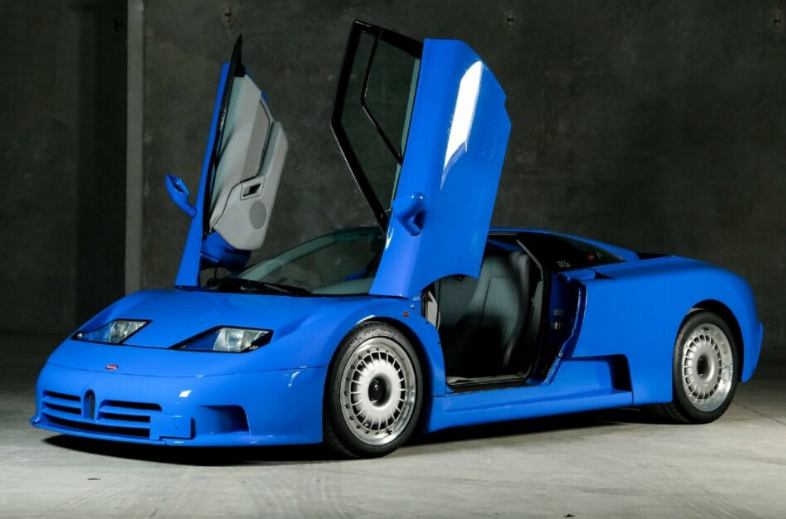 For a brief while in 1987, Italian businessman Romano Artioli purchased the Bugatti name and a facility in Italy, where he made Bugatti automobiles. During the Artioli era, Bugatti was resurrected and liquidated around 1995.

In this period, just one model was produced by the brand. It was named EB110. There are four turbochargers and 12 throttle bodies in the car’s 3.5-liter V-12 engine. All four wheels are powered by a 6-speed manual transmission.