12 Most Haunted Places in America – Visit at your Own Risk

Do you remember the old childhood stories your grandparents would tell you about ghosts, monsters, and spirits? There have been varied opinions about the presence of ghosts in the world. While some people believe that evil exists, others do not. Even if you deny the existence of supernatural power in the environment, some ghost stories will convince you that they really exist.

America has been home to many ghost encounters and paranormal activities. The lingering spirits are present in many places in the country, from abandoned houses to abandoned hotels, theatres, and even public places.

Most Haunted Places in America

Check out the most haunted places in America.

Once upon a time, Bodie was home to 10,000 people in California. Today, it has become one of the most haunted places in America. This place boomed in the 1870s and 80s when gold was found in the hills around Mono Lake and people would come to hunt for it. At the same time, this place recorded many supernatural activities. 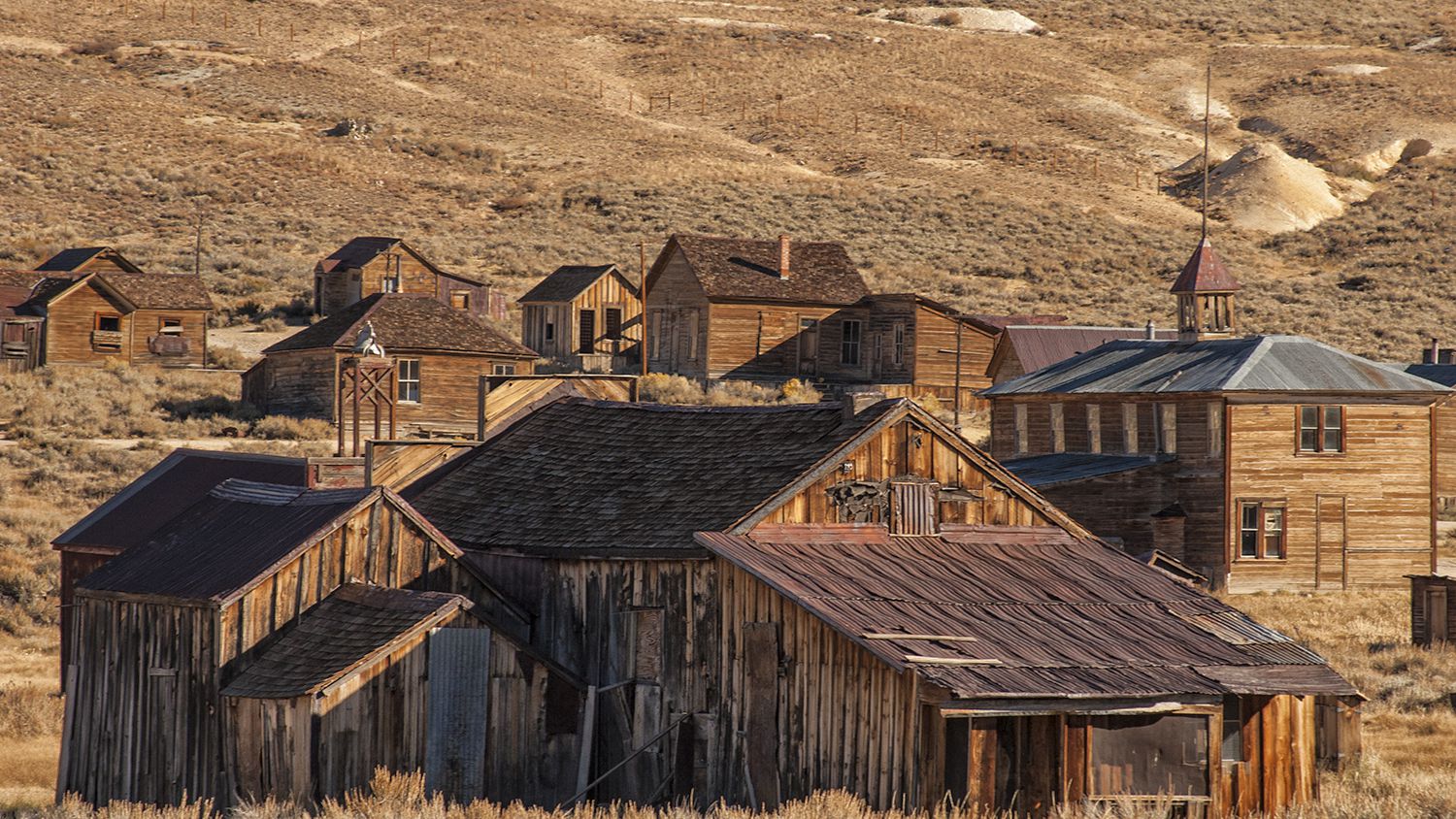 Several paranormal activities, such as music playing from the shuttered bars, ghost sightings, and others were experienced by the people who lived here. According to legends, if a visitor takes anything here, he remained cursed with bad luck and health issues throughout his life.

Cahawba became the first capital of Alabama. It was also infamous as a ghost town with many haunted stories and ghost sightings. The town takes its name from the longest river in the state resting at the confluence of Cahaba and Alabama. Following the Civil War, it was abandoned. 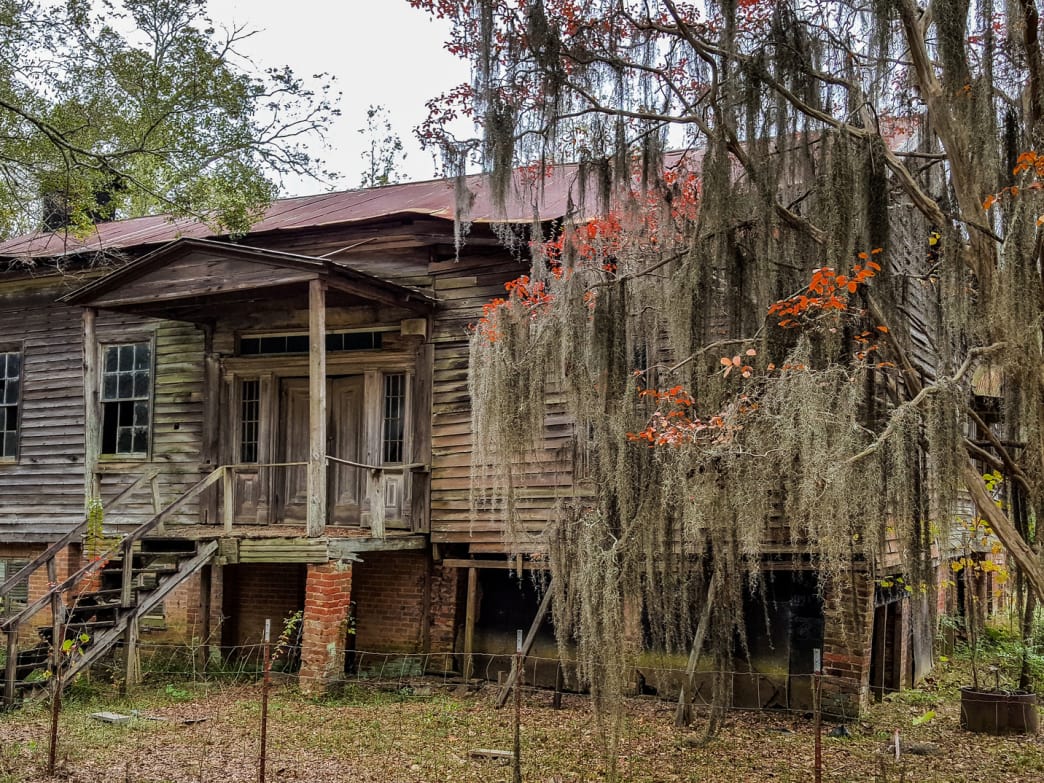 Many ghosts and evil spirits house its empty buildings. There are also slave burial grounds and eerie cemeteries. It is said that a luminous floating orb appears in the former garden maze of Colonel CC Pegues’s house. The site is open for ghost tours.

Masonic Temple in Detroit is one of the most haunted places in the United States of America. Many travelers visit this site, but little do they realize that it is home to the ghost of the architect, George D. Mason, who constructed the building. 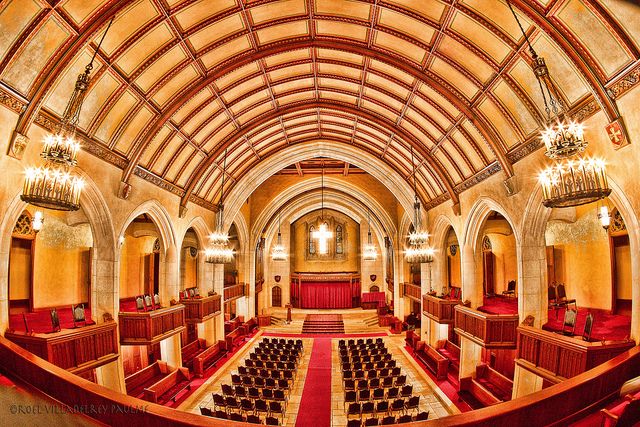 The temple looks mystical and features secret staircases, hidden passages, and 1000 rooms. Everything was constructed so Gothic that it put the architect to bankruptcy. Consequently, he jumped off the temple and succumbed to death. His spirit still roams inside.

Poinsett Bridge in South Carolina is reckoned as one of the oldest bridges in the state. Interestingly, it is also one of the terribly haunted places in America. Many accidents keep happening with those who travel here, for this place is taken over by evil spirits. 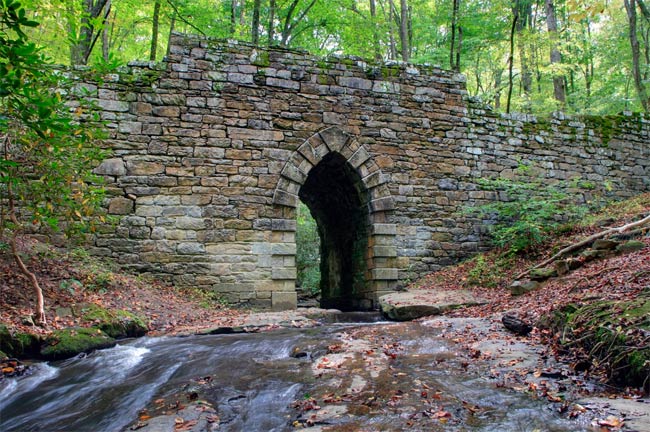 If the story is to be believed, two people died in a car accident while driving their car on this bridge. What’s spooky is that the body of a mason who died during the construction of this bridge is bound within. If you want to visit this bridge, we suggest you drive at your own risk.

Many hotels in America entertain various ghost stories, and the Crescent Hotel in Eureka Springs, Arkansas is one of them. When you see this place from the outside, it would appear ornate building steeped in 140 years of history. But the inside of the building will totally scare you. 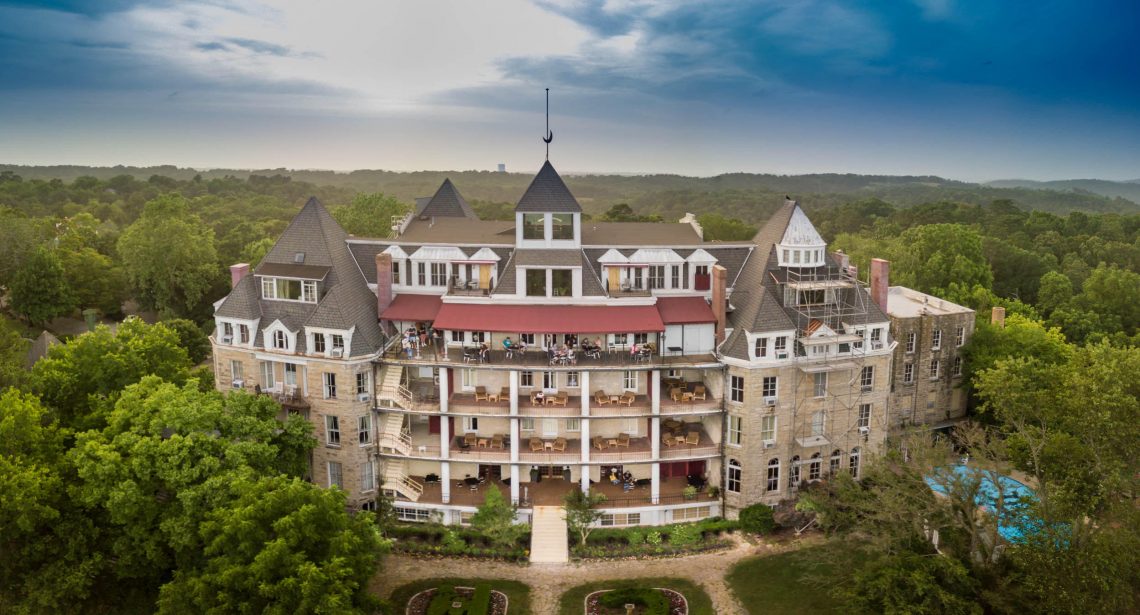 During the night, many guests pass out or faint, and everything happens in a common spot. According to many stories, this spot is right above a morgue. It is said that the owner of the inn was a fake doctor who attempted to cure cancer patients but failed. Many visitors have talked about unexplainable paranormal events that keep on happening here.

Another hotel considered to be one of the most haunted places in America is the Hotel Monte Vista, Arizona. It is the same place where John Wayne stayed in room 210. This hotel is home to many ghosts, and numerous stories revolve around them. 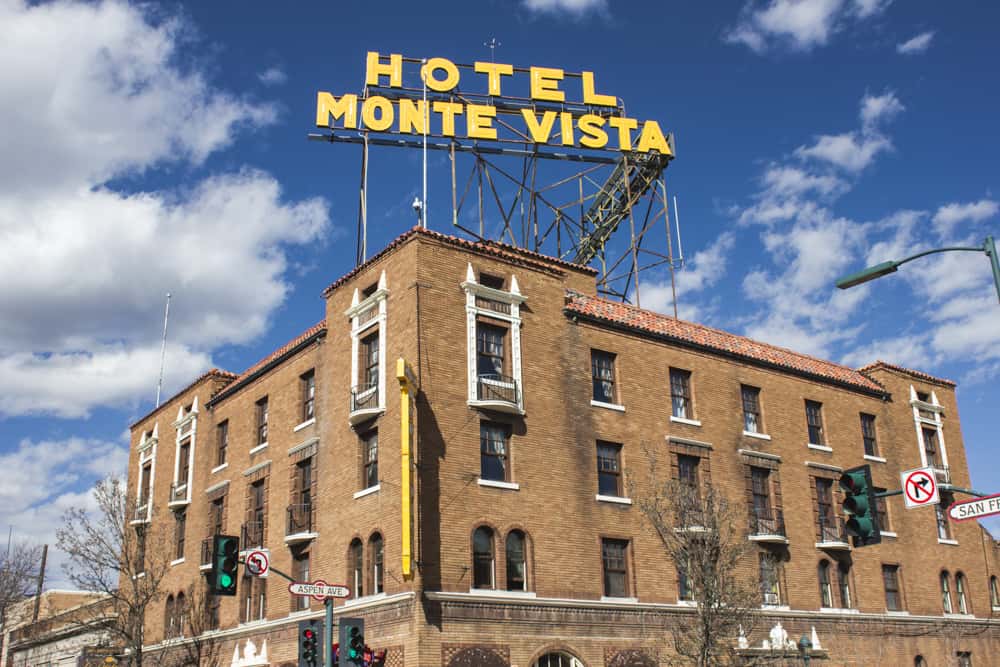 It is said that a bellboy is one of the many ghosts of this hotel. He appears to be a young man in a red coat with brass buttons. The bellboy taps your door and shouts ‘room service’ and when you open the door, he suddenly disappears. In room 220, the story of a ghost of a former renter prevails. The guests have often complained about the TV turning on in the middle of the night.

When you look at the Sallie House from the outside, it would appear a pretty suburban home. This house rests only a few blocks away from the birthplace of Amelia Earhart. In the house lived a little girl Sallie. Unfortunately, she met an untimely death. The house was then let out for rent in 1993. The couple who lived here after Sallie’s death experienced many strange occurrences. For instance, the light in the nursery would turn on by itself. The husband also discovered scratches on his body. This place is popular among ghost hunters today.

Dock Street Theatre is located in Charleston, South Carolina. It happens to be one of the most haunted places in America. It is also one of the oldest theatres in the country. It is said that the fire burned down the original structure of the building, after which the Planters Inn was built on the spot. It was again converted into a theatre in the 1930s. 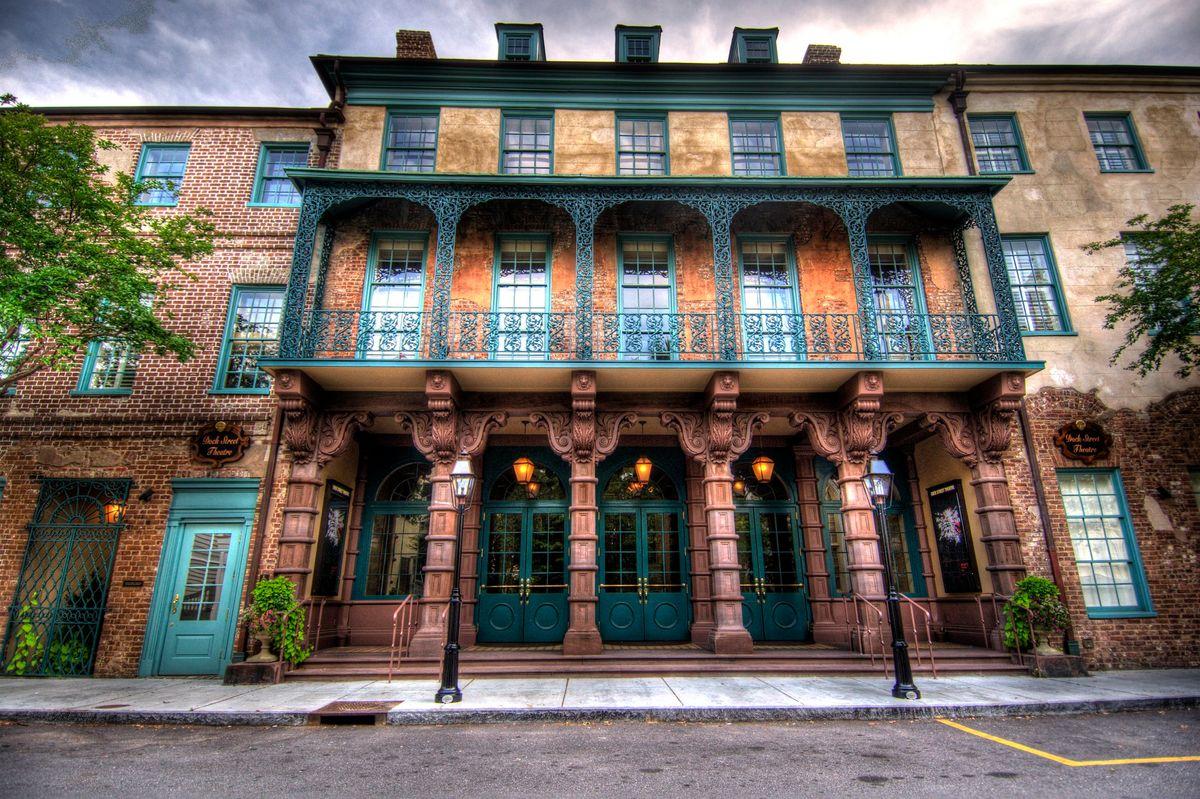 According to the locals and their many stories, a ghost named Nettie Dickerson lives in this theatre. She was struck by lightning while standing on the balcony of the inn. Her shadow is often seen gliding around the second floor of the theatre. Another sighting of a renowned 19th-century actor, Junius Brutus Booth, was also spotted. Reportedly, he used to visit the Planter Inn very frequently.

If you are a bookworm, you might have heard this name many times. House of the Seven is a famous novel that took its inspiration from this property. The house of the Seven Gables was the site of  the Salem Witch Trials. It also happens to be the birthplace of Nathaniel Hawthorne, who used this property to write the novel. 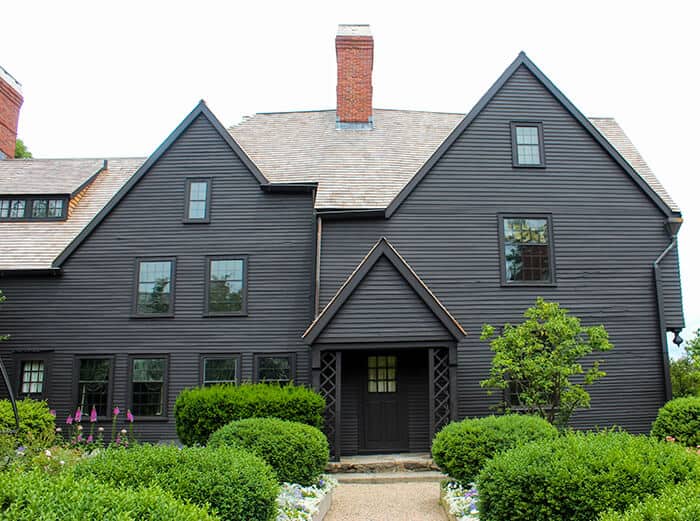 The exteriors of this house look beautiful yet spooky. It is believed that this place is surrounded by ghost sightings and paranormal activities.

This place may look clean, green, and lush, but it has a dark side with many paranormal events taking place one or the other day. The visitors have often talked about the eeriness in the air they experience upon visiting the Myrtles Plantation in Louisiana. 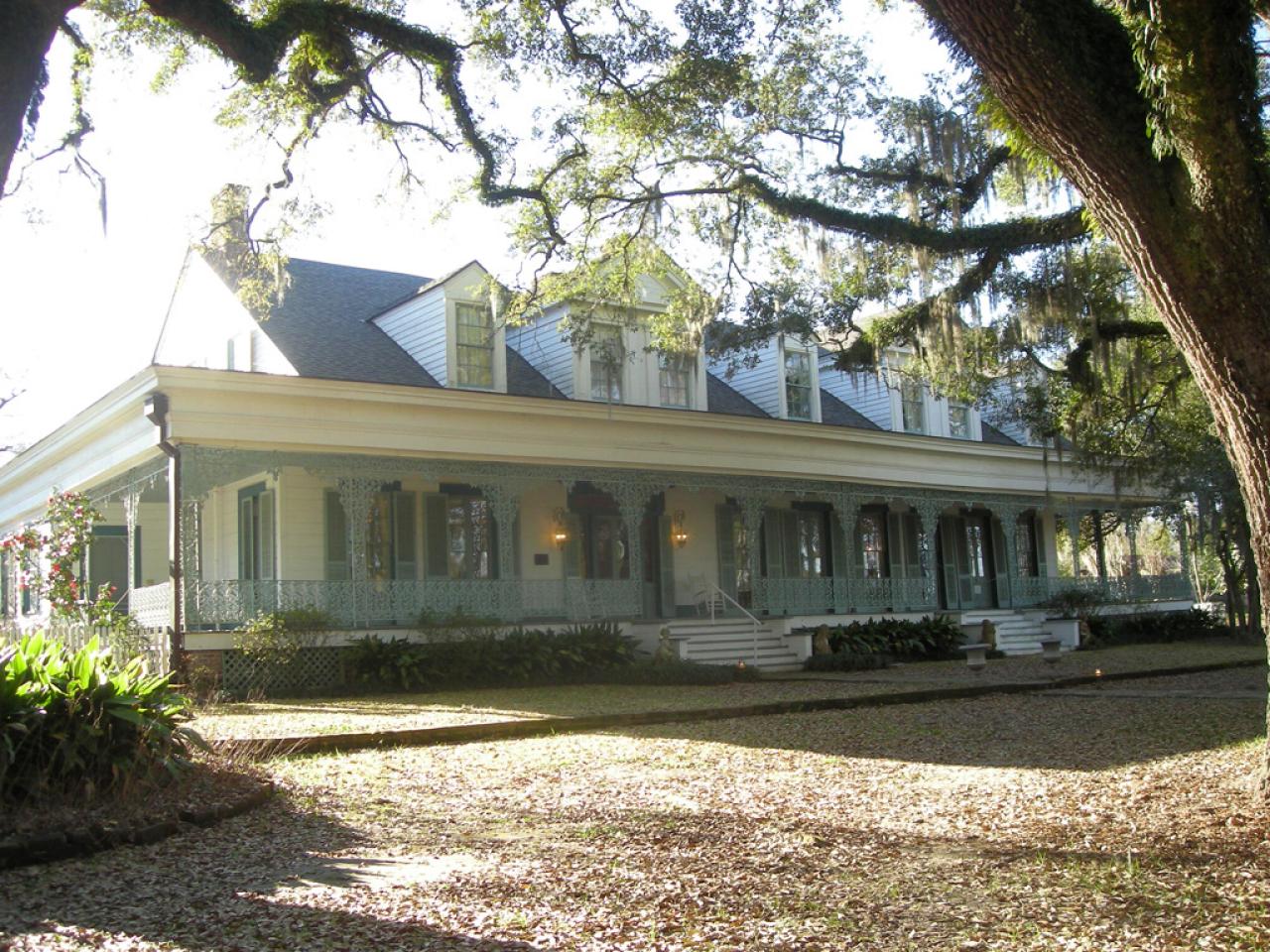 According to the history of this place, it was home to the ghosts of 12 people who were victims of a revenge. A former master had cut the ears of one of the slaves named Chloe, for eavesdropping. In resentment, Chloe killed the master’s two daughters by poisoning their birthday cake. After the incident, one of the daughters was hung in the house.

Whaley House in San Diego is a beautiful-looking property following a Greek revival style. This residence came into being in 1857. A successful businessman, Thomas Whaley, built the property for himself and his family. Sadly, the family was plagued by many unfortunate events that took place back to back. 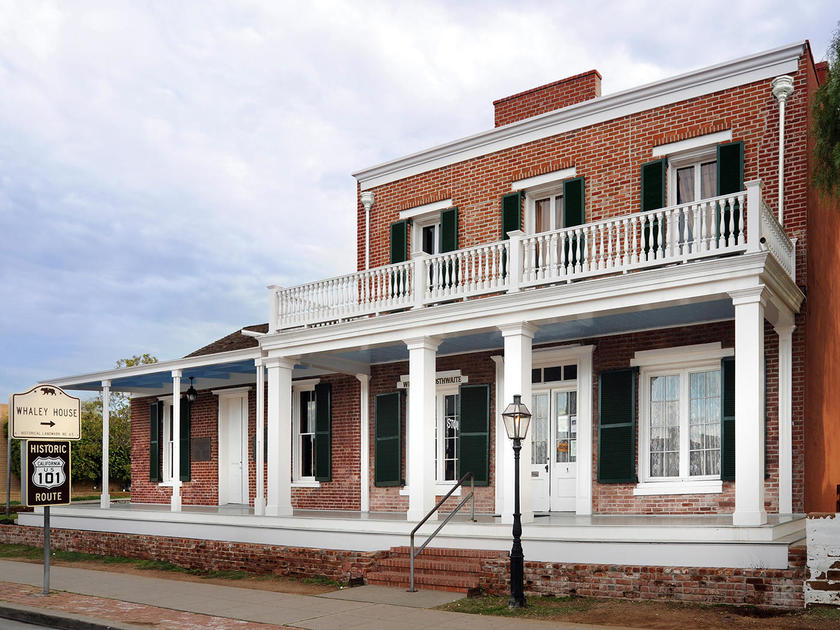 One of their sons died of Scarlet fever when he was only 18 months old. In another event, the Whaleys lost their daughter, Violet Eloise, following her suicide after marrying a con artist. She shot herself in the chest with her father’s gun. Violet was only 22 when the incident took place. The house was taken over by the eldest son of the Whaleys, Francis, who, too, lost his 88-year-old daughter and died the following year. During the ghost tours, the visitors often hear infant cries and spot ghost sightings.

This place is considered a site of 8 cold-blooded murders, making it one of the most haunted places in America. The power and might of the evil spirits and paranormal activities at this place are so grave that a visitor stabbed himself while taking a ghost tour in the house.

The Villisca Axe Murder House is filled with the rage of eight people murdered on the site. The incident took place in 1912. Six members of the Moore family and their two guests were found floating in their own bodies by the authorities. All of them were killed by an axe. The fact that nobody could find out who killed the family makes this incident spookier.

The above-listed ghost stories and events would make you believe ghosts exist. What is your take on the most haunted places in America? Tell us in the comments below. Keep in touch for more.