Caitriona Balfe is an Irish actress and producer who is well-known for playing the role of Claire Fraser in the Starz historical drama series Outlander. She has received lots of love from the side of fans as well critics for her brilliant performance in the show.

Despite her great chemistry with Sam Heughan in the show, these two are not married in real life. When we talk about her personal life, Balfe has been happily married to her husband Tony McGill since the year 2019. Caitriona Balfe secretly tied the knot with her husband Tony McGill in the year 2019. Continue reading further to know about Tony McGill and his romance with his wife Caitriona.

Here’s everything you need to know about Tony McGill

Tony McGill is the husband of the Irish actress and former fashion model Caitriona Balfe. He was born in the year 1976. Just like his superstar wife Caitriona, Tony is also of Irish descent.

Tony McGill is no stranger to the world of the limelight as he is also a person who works in showbiz. He is a music producer by profession. He is rarely seen posting on social media. It seems like he is a private person. As of this moment, he and Balfe have been spotted out and about in public a few times like at the 2020 Academy Awards.

How did Caitriona Balfe and Tony McGill meet each other?

Up until now, Caitriona has not shared the details of her fairytale romance publicly but back in the day, these two were snapped together in the public in 2016. They attended the ceremony for Jodie Foster‘s Hollywood Walk of Fame star in 2016, the Oscar Wilde Awards in 2017, and BAFTA-related events in 2018 and 2019.

So it seems like the Now You See Me actress and the music producer met each other for the first time in the year 2016. Then, soon afterward, Caitriona shocked her fans all over the world at the 2018 Golden Globe’s red carpet. She hit the red carpet of the award show with a stunning engagement ring on her ring finger. As per various reports, Caitriona Balfe and Tony McGill secretly got married in a private ceremony in 2019. Her Outlander co-star Sam marked his presence at the pair’s wedding and he looked quite handsome.

Then, many sources told People magazine, Caitriona and Tony said ‘I Do’ at St. Mary’s Church in Bruton, Somerset, in the United Kingdom. The wedding of the pair was very private and the duo managed to keep it under wraps. Like Tony, his starlet wifey Caitriona is also very private when it comes to her relationships. At that point in time, many fans of the actress even questioned why their favorite star didn’t share any photos from her wedding day on social media. The fans were very keen to see her beautiful photos as a bride.

Do Caitriona Balfe and her husband Tony McGill have any kids?

At that point, The Devil Wears Prada star dropped an adorable black and white snap of the pair’s brand new baby boy’s hand on the social media platform Instagram. She penned down a lengthy yet heartwarming caption for the post.

She started by writing, “I’ve been off socials for a while as I was taking some time to enjoy cooking up this little human …. We are so grateful for this little soul ….that he chose us as his parents.”

Caitriona went on to say, “I’m in awe of him already and can’t help stare and wonder at all the possibilities of who he will become, where he will go and what he’ll do on the big adventure of his life. Right now he seems so small and fragile and I constantly think how grateful I am that I live in a place, in a time where he is born into peace and safety.”

With the great chemistry that Sam Heughan and Caitriona Balfe have on-screen, it must be hard for Tony McGill to not be jealous. But let us tell you, Balfe’s husband Tony McGill, and her Outlander co-star Sam Heughan share a great bond.

Sam even attended the intimate wedding of Tony and Balfe. Not only this, but in the past, he has even supported and stood up for the couple. At one point in time, Caitriona faced a lot of criticism from fans for missing the London world premiere of the sixth season of the popular show Outlander. 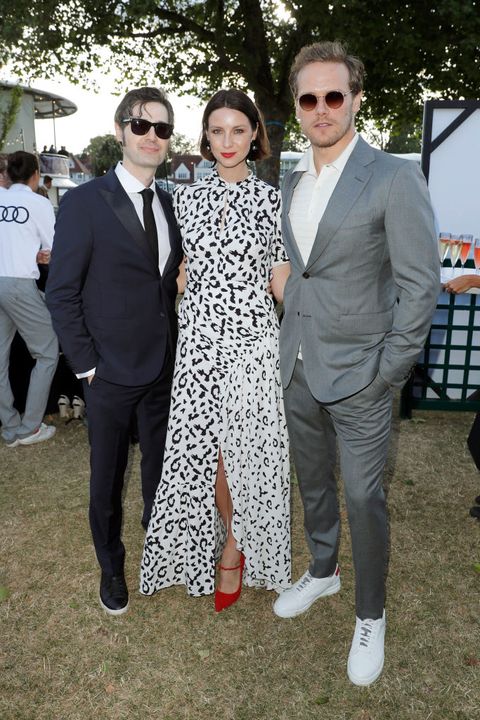 Heughan wasn’t having it and he decided to address the situation and take a stand for his Outlander co-star Caitriona Balfe. In an interview with HELLO! Magazine at the red carpet, he said, “Cait’s in America, she’s just had a child and right now, with everything going on in the world, we’re just glad she can be a part of it virtually.” Heughan and Caitriona are not only co-stars but also good friends.

Do you think Caitriona Balfe and her husband Tony McGill define the term ‘couple goals’?  Kindly let us know your thoughts on the pair in the comments section below. Don’t forget to stay tuned with us for the latest updates from the world of showbiz.