Jordan Kyle Lanier Thorpe is popularly known as ‘Pardison Fontaine’. He is a singer and songwriter by profession. Pardison worked hard and carved out a place for himself in the world of music.

He was born and brought up in Newburgh, United States, US. The time has flown by as now this rock star has a baby girl of his own named Jordy Jr. Thorpe dropped his debut mixtape ‘Not Supposed to Be Here’ in August 2015. Later, he also worked with Cardi B.

When did Pardison come into the spotlight?

Pardison gained recognition in the music industry with his single ”Backin’ It Up” alongside Cardi B. The song was released in 2018. He dropped his debut album “Under8ed” on November 15, 2019.

The 32-year-old has also co-written songs for other artists like Kanye West, ‘Bodak Yellow’ singer Cardi B, and Megan Thee Stallion. He has played a major role in writing songs like “I Like It”, “Ghost Town”, “Yikes”, “Up”, “Wildside”, “WAP”, and many more. The rapper also won a Grammy for his contribution to the song ‘Savage Remix’.

How long have Pardison and Megan been dating?

The couple started dating in 2020 and seems happy. The duo made their relationship official in February when Megan called him ‘boyfriend’ during an Instagram live and said, “That’s my boo and I really like him.” 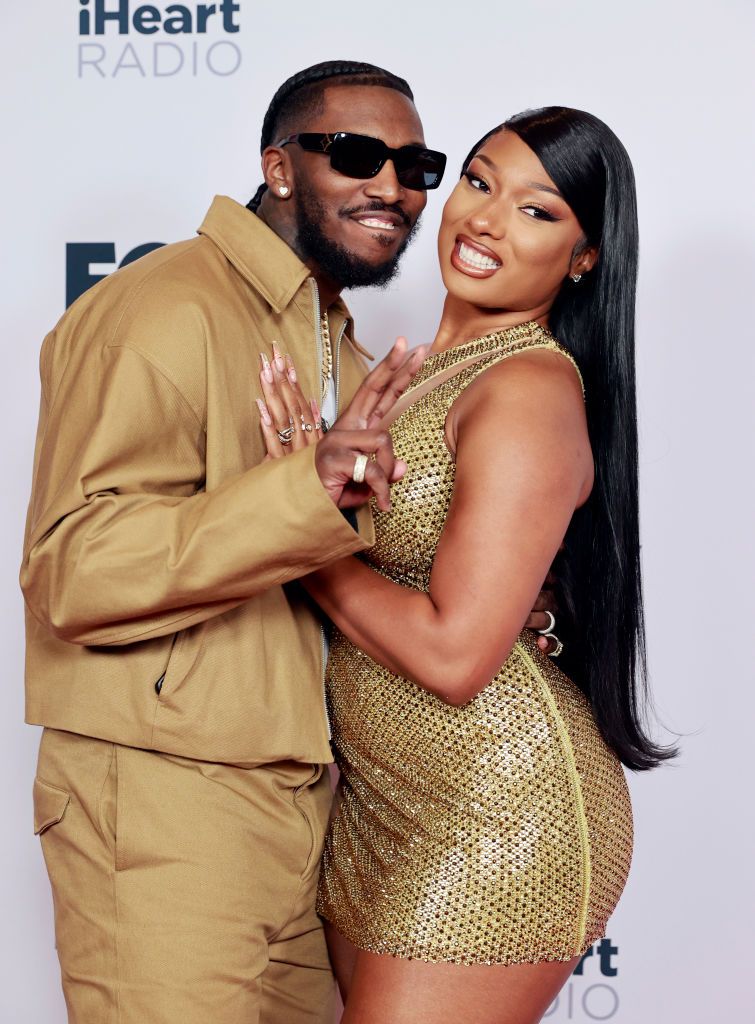 In a series ‘Peace of Mind with Taraji’, the 26-year-old shared her thoughts on her current relationship with boyfriend Pardison Fontaine and said, “My boyfriend does make me very happy. He definitely takes care of me emotionally. He makes my brain feel good. ”

She continued, ” He makes my heart feel good. That’s a big thing for me, because I used to be so into the physical, right, like… but he moves me, he inspires me, and we just feel like a real team. “He feels like a partner.”

Check out the tweets of Pardison for Tory Lanez below:

The rapper took to his Twitter handle to express his thoughts about Tory Lanez and he tweeted,”@torylanez put the phone dwn let’s link .. you n me .. ain’t nothin to talk about.” Tory is also a rapper and record producer who came into the limelight after the release of the mixtape ‘Conflicts of My Soul: The 416 Story’ in 2013.

Fontaine didn’t stop at just one tweet, he returned to the platform and further added, “@torylanez don’t tweet nothin else .. SEE ME.”

@torylanez put the phone dwn let’s link .. you n me .. ain’t nothin to talk about

Tory didn’t step back from replying back to the tweets of Pardison. He stated that the duo has met in the past and Pardison didn’t do much at the time. Tory said,” …[email protected] we’ve had this encounter … u did nothing 🥱put ya phone down big fella ….”

…. @pardi we’ve had this encounter … u did nothing 🥱put ya phone down big fella ….

Why did Pardison call out Tory for a fight?

Let’s take you to the first page of the story, Megan Thee Stallion had an exchange of words with Tory Lanez due to a tweet posted by DJ Akademiks. The singer stated that the tweet had no truth in it. 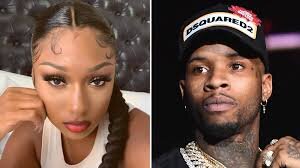 Megan took to her Instagram story to react to the tweet and she wrote, “Court ain’t even started so why yall ready to start lying.” The ‘Savage’ singer also stated that before he began tweeting, he apologized to her in private. Afterward, she shared a conversation that took place between her and Tory. 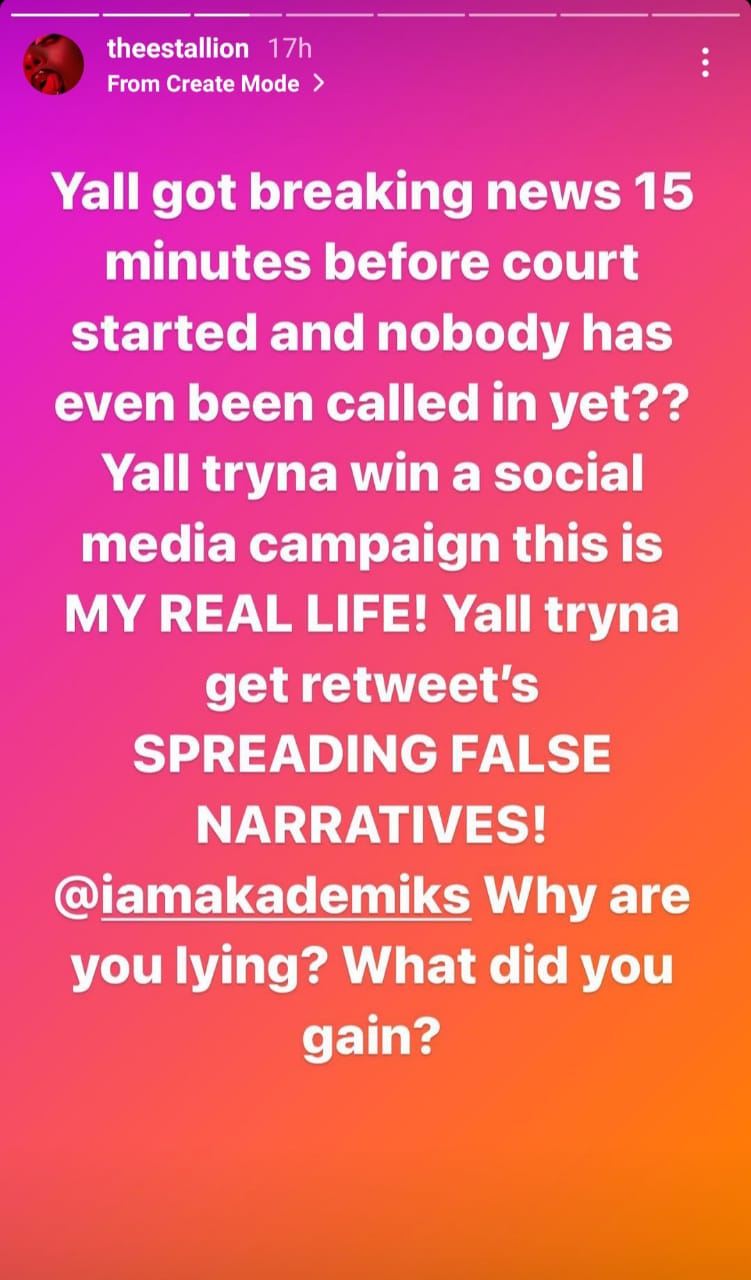 She further added “Yall got breaking news 15 minutes before court started and nobody has even been called in yet?? Yall tryna win a social media campaign this is MY REAL LIFE!” she continued in another post. “Yall tryna get retweet’s SPREADING FALSE NARRATIVES! @iamakademiks Why are you lying? What did you gain?”

Tory came back with another tweet and responded with “….. u can’t buy and tweet your way out of this one ..not today.” 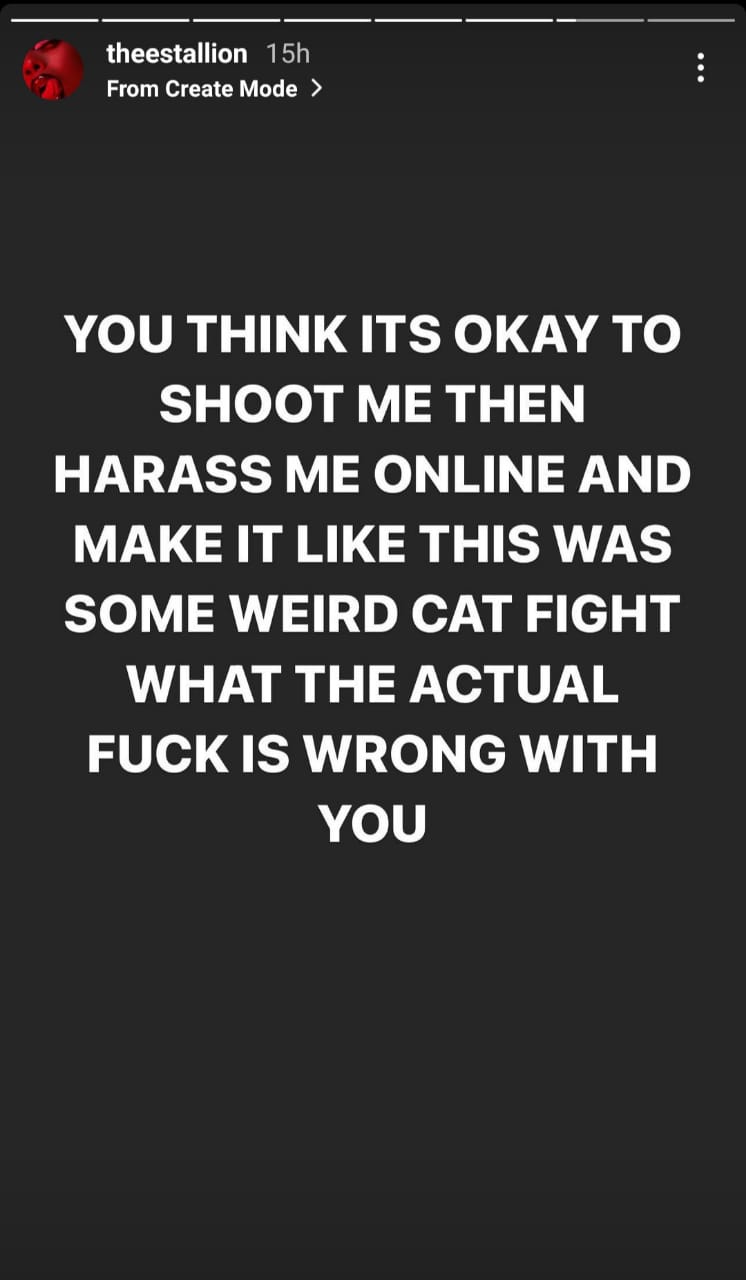 Megan clapped back and wrote a long caption that read, “Lie yo way out of this … if you aint do shit what you was apologizing for? THE LAWYERS GOT YO PHNE RECORDS AND MINE. ALL YOUR TXT. THEY GOT YOU RECORDED ON THE JAIL PHONE TALKING TO KELSEY APOLOGIZING BEGGING US NOT TO TALK.”

Tory took to his Twitter and replied “Good D*ick had me fucking 2 best friends …. and I got caught ‍ … that’s what I apologized 4 . … it’s sick how u Spun it tho …” The conversation between both the rappers was like fireworks coming from both sides.  There was no pause or any kind of break from Megan’s end or Tory’s end. 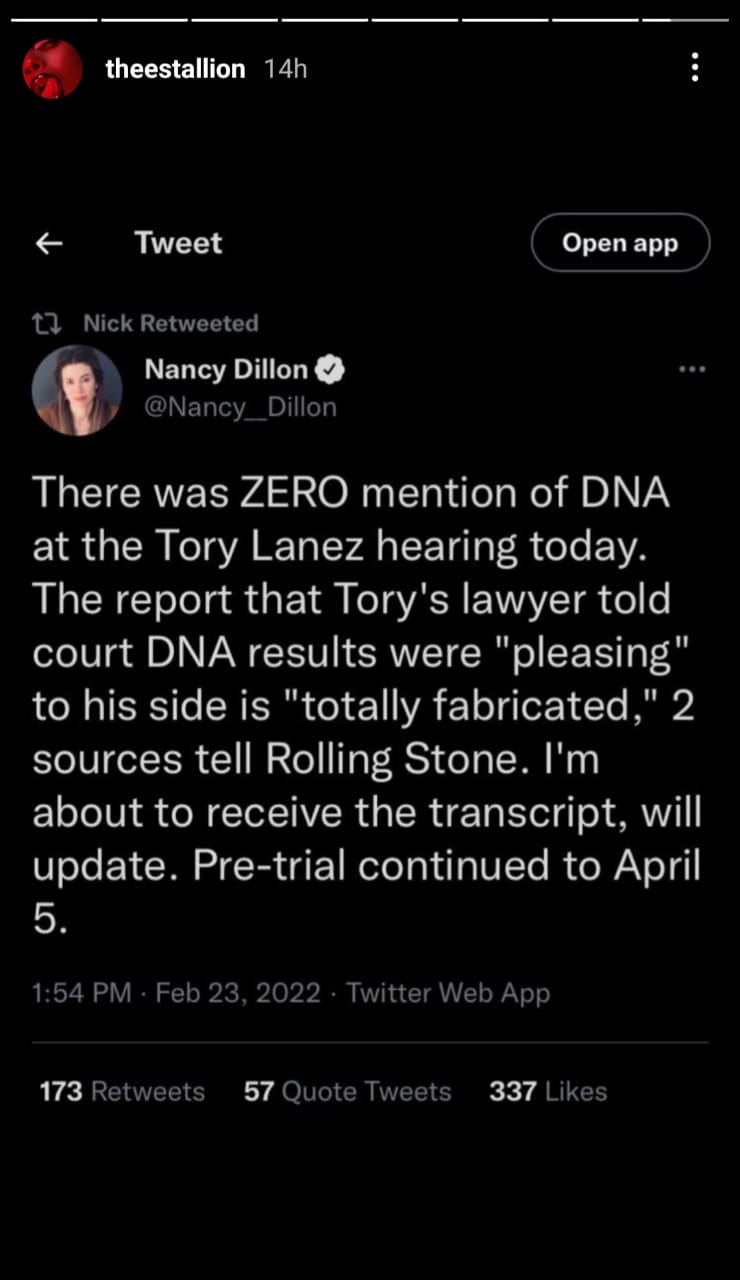 What did Megan’s attorney have to say about the series of events?

During an interaction with XXL, the lawyer of Megan Thee Stallion, Alex Spiro shared his thoughts about the whole turn of events that occurred and said, “This is nothing more than the dishonest machinations of a desperate man.”

When did Megan and Tory’s shooting case begin?

In 2020, Megan stated that the rapper shot her in the foot during a party at Kylie Jenner’s house. Post the incident, she was hospitalized and had to undergo surgery. In an Instagram live, she declared that Tory’s publicist was trying to spread a false narrative of the incident.

The authorities caught Lanez but not for shooting Megan instead it was for carrying a concealed weapon in his vehicle. He was released on $35,000 bail. The Los Angeles Police Department investigated the case but didn’t find any strong evidence to prove that Tory shot Megan. 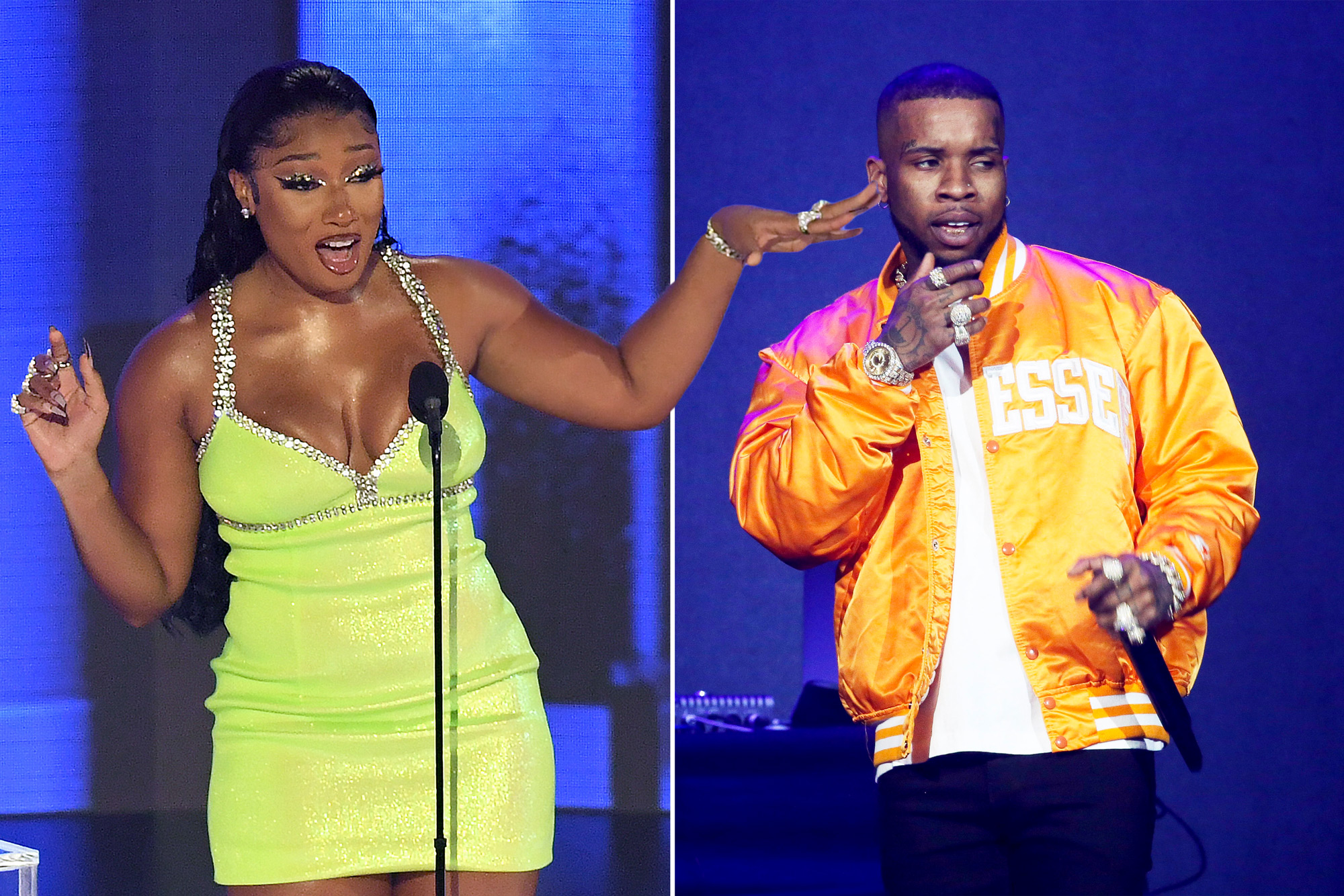 In her Instagram session, Stallion said, “I didn’t get cut by no glass, but let me tell you why they’re saying that. When the police came because the neighbors called the police … the police come — I’m scared. All this shit going on with the police … I didn’t want to die. I didn’t want the police to shoot me cause there’s a n- – – – with a gun in the car with me.”

A major lead about the case was found on October 8, 2021, which led to the reopening of the case again. The next hearing of Megan Thee Stallion and Tory’s shooting case has been scheduled for April 5.

Stay tuned for more updates regarding their case.