Jovi Nicole is the wife of the former Notre Dame star Manti Te’o. He came into the spotlight after it was revealed that he was being catfished. After the whole love scandal, Te’o managed to find the love of his life, his confidant in fitness enthusiast Jovi Nicole. 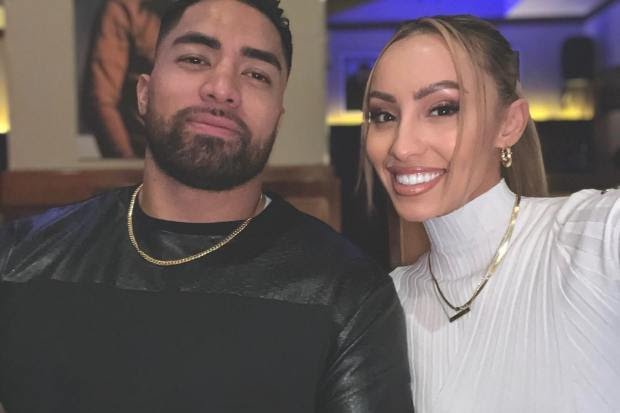 What does Jovi Nicole do for a living?

For those of you who are unversed, let us tell you Jovi Nicole Te’o, born Jovi Nicole Engbino was born on January 14, 1988. As per the reports, she earned a bachelor’s degree in Business administration and Management from Arizona University in the year 2007.

Jovi has reportedly worked as a sales support specialist back in the day. She is very passionate about anything that’s related to health, fashion, and fitness. It wouldn’t be wrong to say that she is a fitness freak. 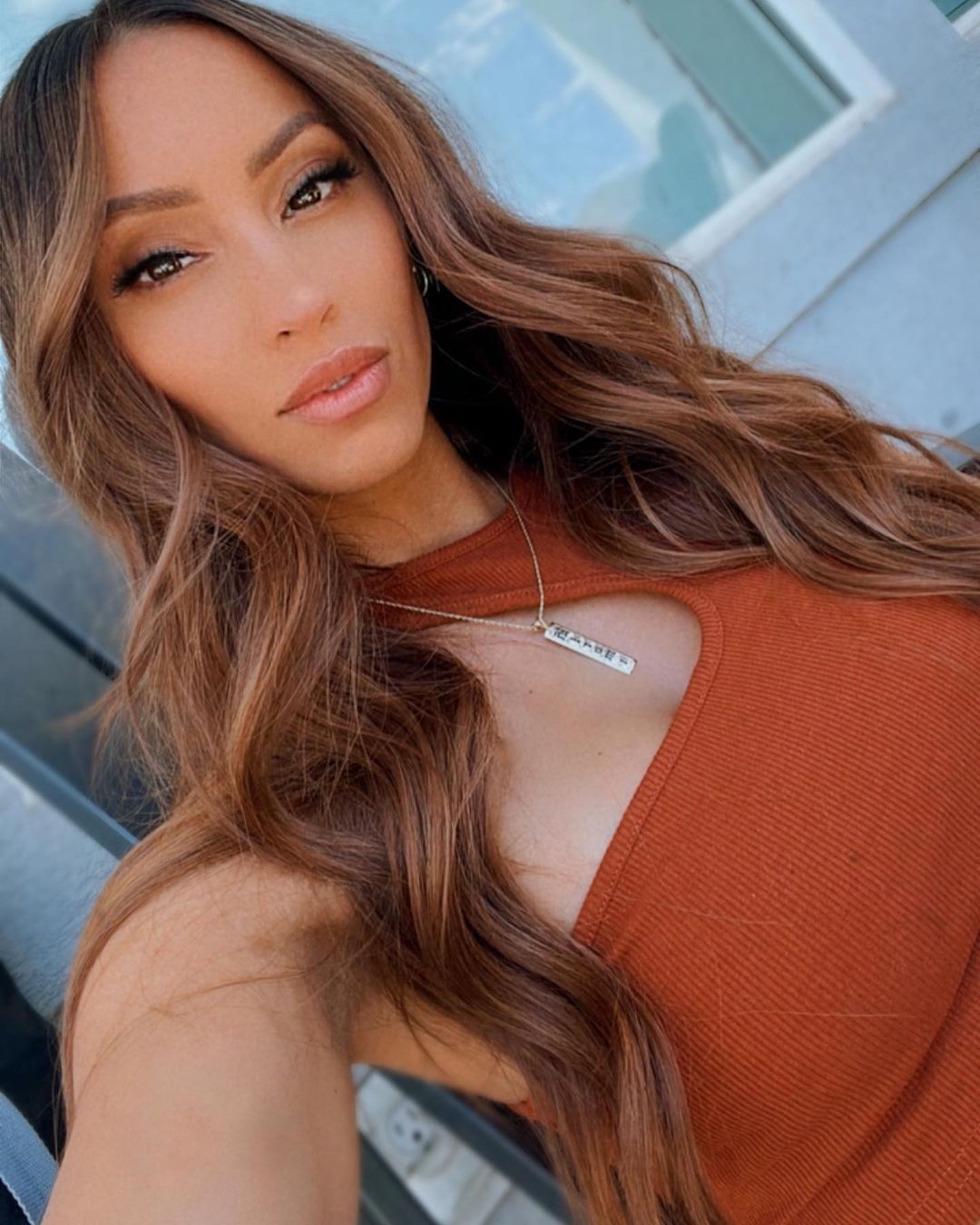 When did Jovi and Manti get married?

Jovi Nicole Engbino and Manti Te’o tied the knot in an oceanside ceremony in La Jolla, California, in the year 2020. They said their vows on August 28, 2020. At that time, the couple also posted pictures from their special day on the social media platform Instagram.

“I couldn’t give you the world but I think I did better … I gave you my last name and it looks good on you Mrs. Te’o,” he wrote alongside the series of pictures that showed the newlyweds taking a stroll along the beach in their wedding attire. 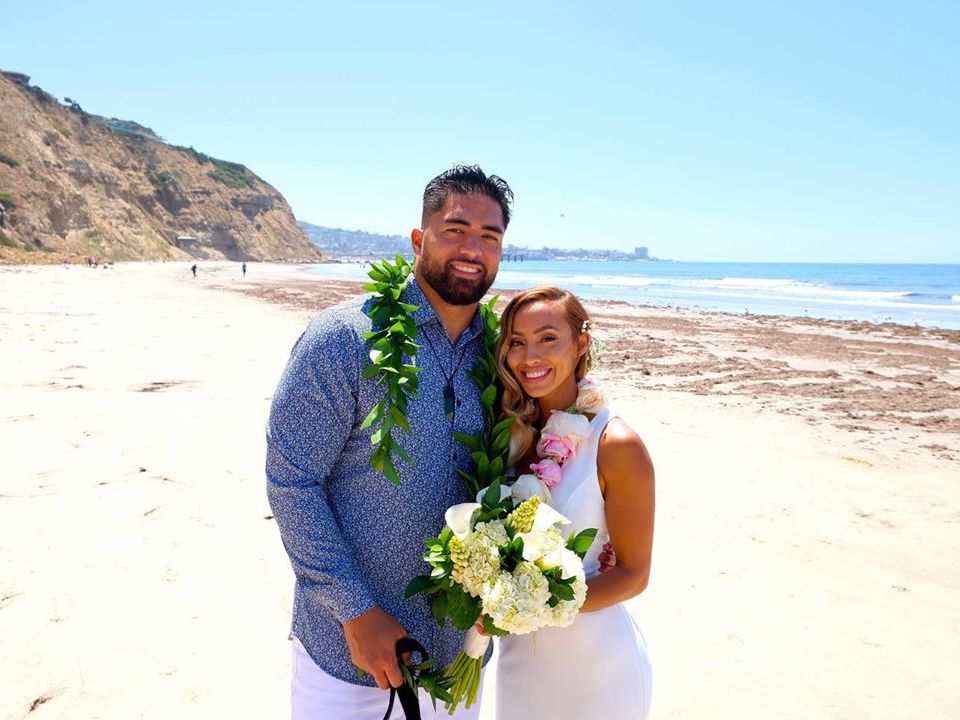 On the other hand, Jovi also took to her Instagram to share a couple of snaps of the pair from their wedding day. She wrote, “Yesterday I got to marry my best friend and the love of my life in an intimate beach ceremony,” in the caption of the post.

Jovi went on to say, “Although this was not how we envisioned our ceremony, it was perfect. We will be having our reception and celebration when Temples and venues open back up so we can share this special occasion with our families and I couldn’t be more excited.”

During an earlier interview, Manti talked about his ladylove Jovi and said, “She’s the most beautiful girl I have ever met, not because of her physical beauty but because of her character and who she is, she’s just that person that I turn to.”

How many kids do Manti and Jovi have?

Manti and his wife Jovi share one kid. As of now, the two of them are doting parents to a baby girl named Hiromi. Nicole gave birth to her and Manti’s first child, daughter Hiromi on August 12, 2021. Every now and then, the pair’s daughter keeps making appearances on their social media accounts.

Jovi and Te’o’s baby girl Hiromi just turned one week back. Then, the football star took to his Instagram and shared an adorable snap of himself and his daughter. “Happy birthday my little one. No matter how old you get, you will always be daddy’s little girl. Daddy loves you Hiromi,” he captioned the post. 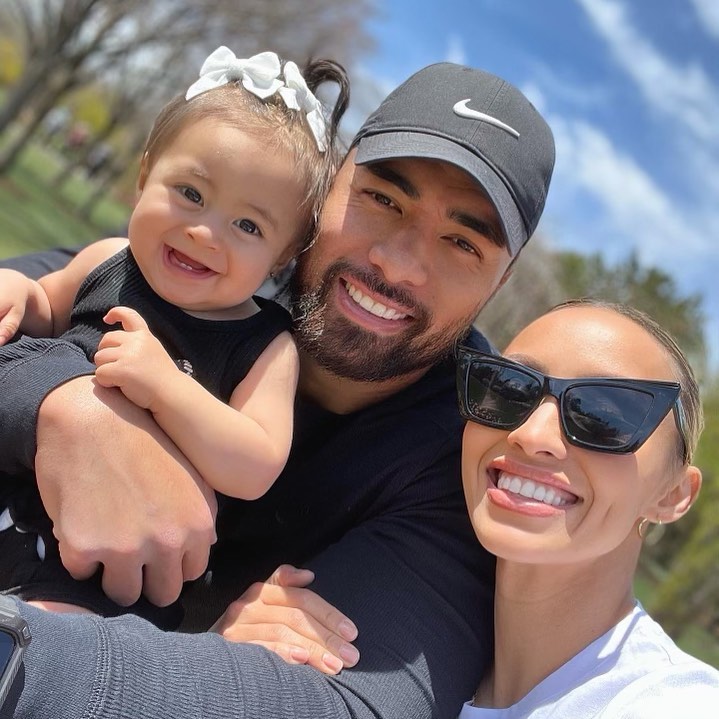 Earlier this month, Manti and Jovi announced they were expecting baby no. 2

Yes, you read that right. Manti and his wife Jovi are expanding their family. This month, the couple revealed that they were expecting their second child. We are super happy for Manti and Jovi.

Earlier this month, Manti let the cat out of the bag. During an interaction with CBS Mornings, he stated that he and his wife Jovi have their second baby on the way. He also revealed the gender of the pair’s soon-to-be-born child. The pair is having a baby boy. 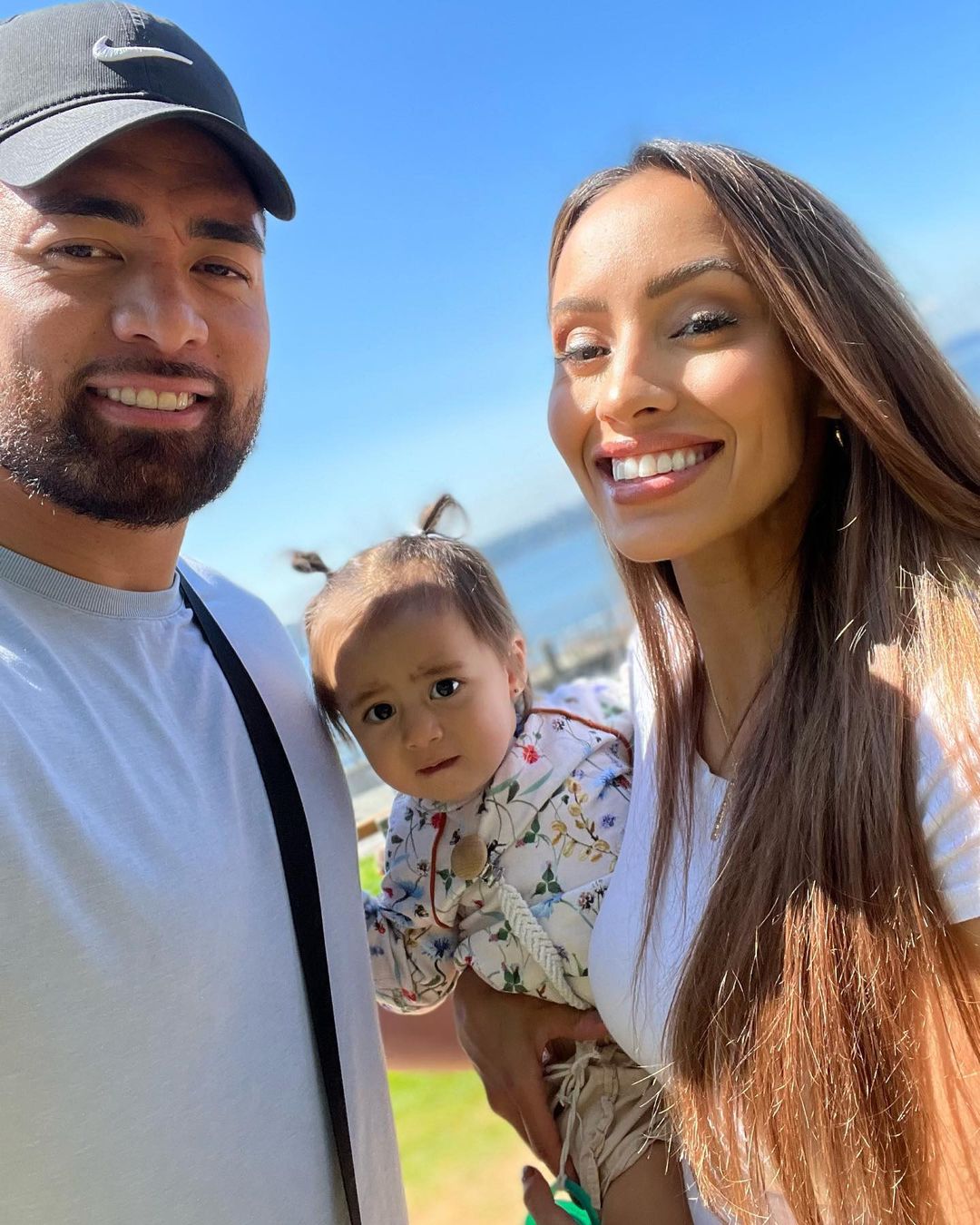 At that time, Te’o told the media outlet, “I am a loving husband, and I have a wonderful wife. I have a daughter and we have a son on the way.”

At this point in time, Jovi has 609 posts on her Instagram feed. The fitness enthusiast boasts a fanbase of more than 40k followers on the social media platform Instagram.

Every now and then, Nicole keeps sharing videos of herself working out on the social networking platform Instagram. Not only this, but when she was pregnant with her and Manti’s baby girl Hiromi, she documented her fitness journey throughout her entire pregnancy on Instagram. 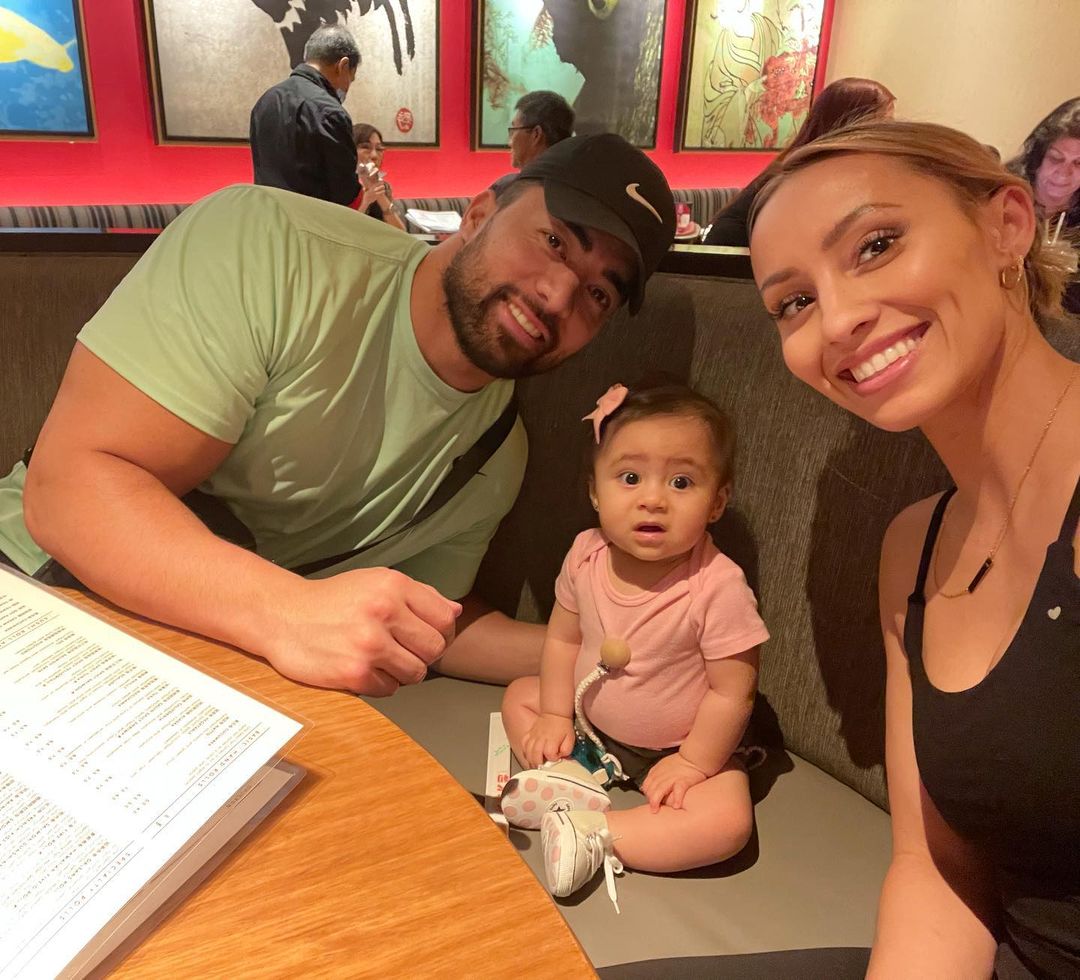 As per her Instagram bio, Jovi is a “future nurse injector” and recently completed her fourth semester at a nursing school she is attending.

When we scrolled through the Instagram feed of Jovi Nicole, we found pictures of her from her trips all over the world, some adorable snaps of her, with her husband Manti and the pair’s daughter Hiromi and a couple of pictures with close friends and family.

What does Manti Te’o do now?

At the moment, Manti is not linked with any team. He is a free agent. In the past, he was with the San Diego Chargers on a four-year contract worth over $5 million after the exposure of the girlfriend hoax. After a while, Te’o signed up a deal with the Chicago Bears in October 2020 but his practice squad contract came to an end on January 18, 2021.

In a media interview, Manti spilled the beans on his journey from playing college football to NFL after the cheating scandal saw the light of the day. He said, “The football field, that was my domain, you know. Like, when I’m on the football field, I feel like nobody can beat me.” 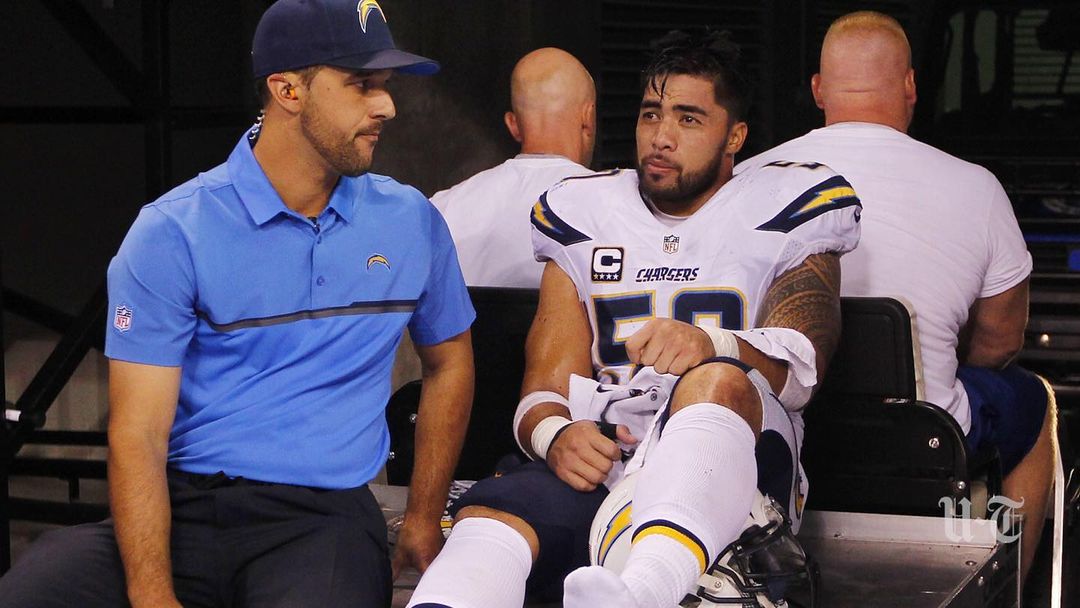 We send our heartiest congrats to Manti Te’o and his wife Jovi Nicole as they are all set to add another member to their clan. Sending lots of love and light their way. Don’t forget to stay tuned with us for the latest updates from the world of showbiz.