Who is Georgina Chapman? Everything About Adrien Brody’s Girlfriend

It seems like Adrien Brody is in a happy space in his personal life right now! The Peaky Blinders star is dating Georgina Chapman at the moment. Not long ago, the couple was also spotted chilling in Saint-Tropez, France.

Continue reading further to learn more about the girlfriend of Adrien Brody, and the budding romance between the pair. At this point, Adrien Brody and his ladylove Georgina Chapman are having the time of their lives in France. The two of them are vacationing in Saint-Tropez. A few pictures of the pair have also popped up on the internet in which they can be seen chilling.

One picture showed the duo grabbing their towels after they completed their swim in the sea on July 19, 2022, Tuesday afternoon. In the snap, Adrien sported a colorful geometric-print bathing suit. On the other hand, Chapman was seen wearing a black and gray bikini. She completed her look with a pair of black sunglasses. 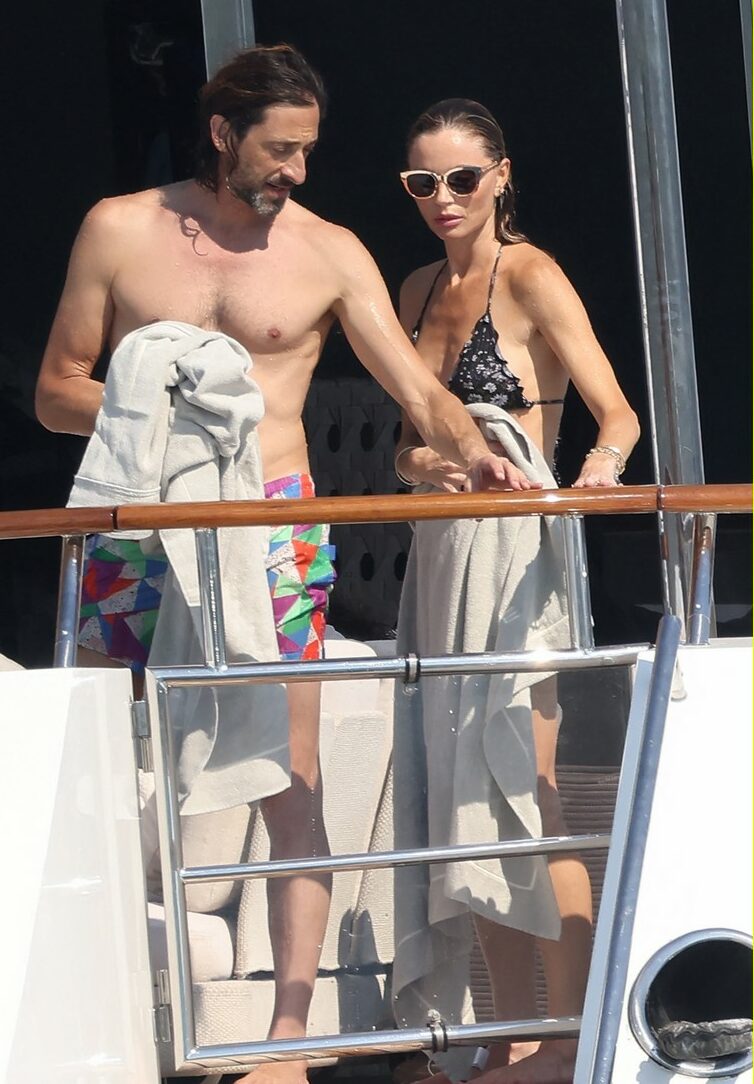 What does Georgina Chapman do for a living?

For those of you who don’t know, let us tell you Georgina Chapman is a fashion designer and actress by profession. She was born on April 14, 1976, in Hammersmith, London, England. She is the daughter of Caroline Wonfor who is a journalist, and Brian Chapman, a co-owner of the coffee company Percol.

Chapman was brought up in Richmond, southwest London. She went to Marlborough College in Wiltshire. During her twenties, she appeared in an advertisement for a dandruff shampoo named Head & Shoulders. It is one for throat lozenges Soothers. Soon afterward, she went to Chelsea College of Art and Design that’s exactly where met her future business partner Keren Craig. Georgina earned a degree from Wimbledon School of Art in the year 2001. After a while, she began working as a costume designer. After completing her graduation, she starred in various television shows and films.

Chapman and Craig launched their clothing brand Marchesa in 2001. The inspiration behind the name of the duo’s company came from the name of socialite Marchesa Luisa Casati. It is a clothing brand that specializes in creating women’s wear. The investors of the company are as follows: Giuseppe Cipriani and Steve Witkoff.

The company Marchesa is based in New York City. Marchesa is well known for designing dresses for A-listers from the world of entertainment including Scarlett Johansson, Jennifer Lopez, Cate Blanchett, Anne Hathaway, and Penélope Cruz. 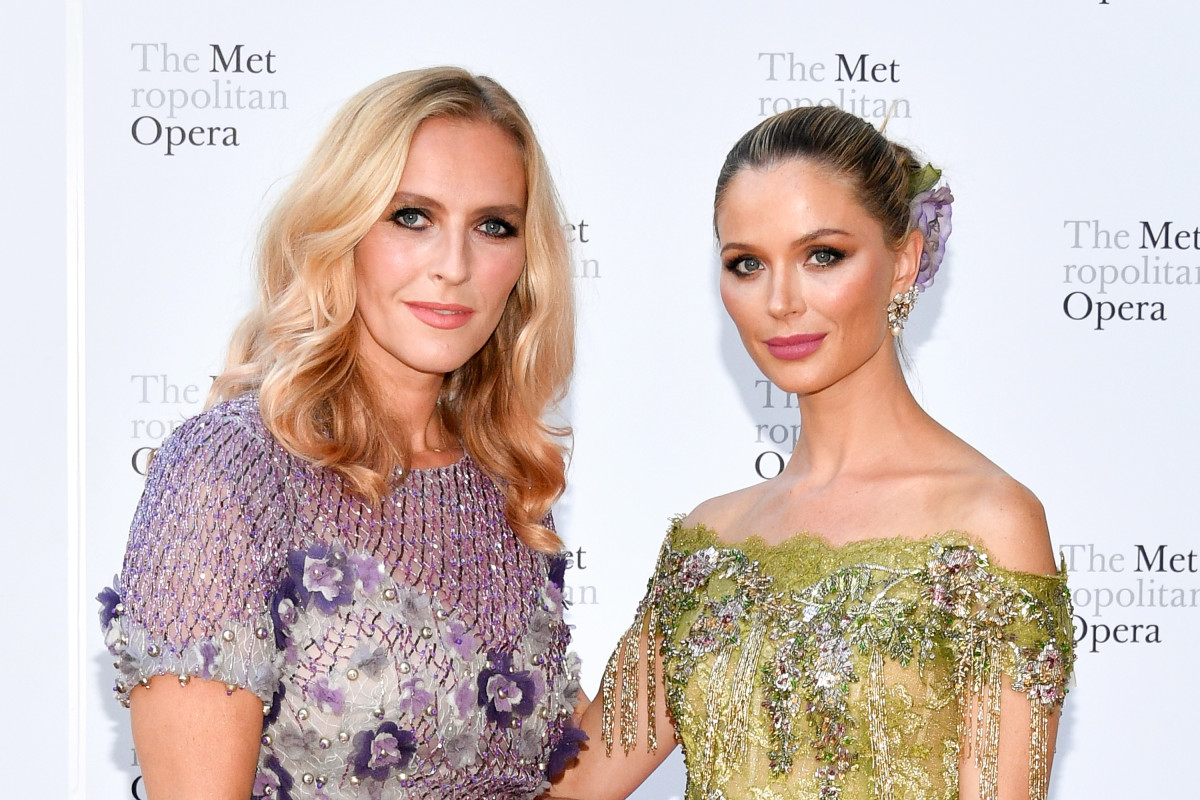 Marchesa joined hands with Le Métier de Beauté on a cosmetics line featuring the palettes of designers Chapman and Craig in the year 2010.

Georgina has starred in many movies

So far, Georgina has been a part of a couple of movies such as Desire, Jeffrey Archer: The Truth, Sons & Lovers, Bride and Prejudice, Rosemary & Thyme, A Soldier’s Tunic, Piccadilly Jim, Derailed, The Business, Match Point, Awake, The Nanny Diaries, Danny The Dog, and Factory Girl.

In addition to this, Chapman has also starred in some shows including Project Catwalk, Gossip Girl and Project Runway All Stars. In the 2006’s series Project Catwalk, she played the role of a guest panelist in the episode 9 of season 1. She also made a guest appearance in CW’s teen drama show Gossip Girl. When we talk about the show Project Runway All Stars, Georgina appeared in the show as a judge. Throughout her career as an actress, she managed to be a part of some good movies and shows.

Chapman was married to Harvey Weinstein before

As per multiple reports, Georgina and Harvey began dating in the year 2004 post his divorce from his ex-wife Eve Chilton. The pair tied the knot on December 15, 2007, in Connecticut, United States.

The former couple shares a total of two children. Chapman and Harvey are parents to a daughter named India Pearl Weinstein and a son named Dashiell Max Weinstein. She announced that she was divorcing Harvey in 2017. Why did Georgina and Harvey get divorced?

The Marchesa fashion designer revealed that she was filing for divorce from her then-husband Harvey Weinstein on October 10, 2017. Chapman made the big decision after the numerous sexual misconduct allegations against him surfaced.

The Bride & Prejudice star announced that she was divorcing Harvey after several women came forward and accused him of various allegations including rape, assault, and sexual harassment.

At that point, Georgina issued a statement to People, that read, “My heart breaks for all the women who have suffered tremendous pain because of these unforgivable actions. I have chosen to leave my husband. Caring for my young children is my first priority and I ask the media for privacy at this time.” 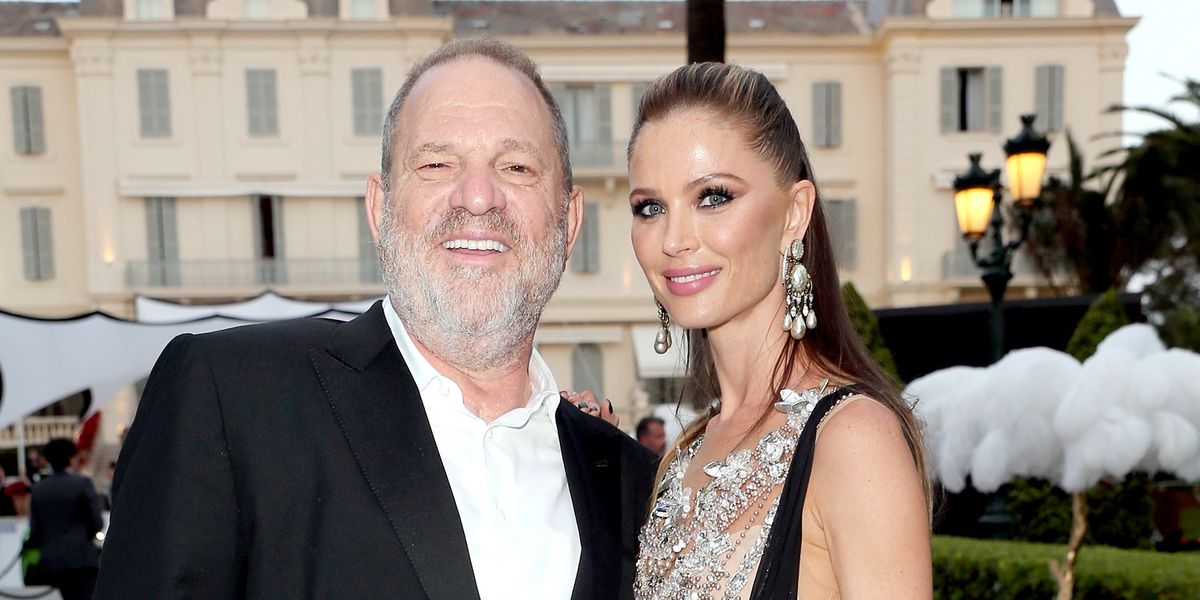 Around the same time, Harvey also put out a statement regarding the pair’s separation. He told Us Weekly, “I sat down with my wife Georgina, who I love more than anything, and we discussed what was best for our family. We discussed the possibility of a separation and I encouraged her to do what was in her heart. In the end, she made the decision to separate.”

Weinstein further added, “I understand, I love her and I love our children and hopefully, when I am better, I will be in their lives again. I support her decision, I am in counseling and perhaps, when I am better, we can rebuild.” The two of them reached a settlement in January of 2018 and their divorce got finalized in July 2021.

Then, celebrities also had to face a lot of backlash if they decided to wear clothes from Harvey’s ex-wife Georgina’s fashion brand, Marchesa. Back in the day, the Baywatch star Priyanka Chopra came forward and defended Georgina after she wore Marchesa.

At that time, Priyanka Chopra opted for a Marchesa gown for her bridal shower. She was bashed by fans for wearing a gown by Harvey’s ex-wife Georgina Chapman. During an earlier interaction with Women’s Wear Daily, Priyanka stated that she wore a Marchesa gown as a sign of women supporting women. She said, “Georgina’s a friend of mine, and she has been. And it’s not her fault. And I don’t think it’s right to take it out on a self-made woman what somebody in her life did.”

Chopra went on to say, “That’s the wrong attitude. I’ve known her for years, and that was a beautiful gown and deserved to be worn by a bride-to-be. And it made me feel like a princess. It was the right choice.”

When did Georgina and Adrien spark dating rumors?

Georgina Chapman and Oscar-winning actor Adrien Brody sparked romance rumors in February of 2020. The duo was seen having a candlelight dinner with a bunch of friends. At that time, a source stated that the pair had been together for a long time and shared similar interests. Since her divorce from Harvey, Brody is the first person Chapman has dated.

According to Page Six, the two of them had met and socialized in the past but things started heated up romantically for the duo when they both attended the 2019 launch of model Helena Christensen’s swimwear line in Puerto Rico held at the swanky Dorado Beach Ritz-Carlton Reserve. Chapman and Brody made their romance official in 2021

Yes, you heard it right. Georgina and Adrien made their first appearance as a couple at the Tribeca Film Festival in June of 2021. They hit the red carpet for the premiere of his crime thriller Clean.

Chapman was like a breath of fresh air on the red carpet of the Tribeca Film Festival as she donned a sheer black dress. Her top consisted of a slim slit to put her toned midriff on display and it featured lovely blue embroidered flowers meanwhile her skirt was pure black. The Marchesa co-founder had her brunette locks swept back to highlight her dangling hoop earrings. She topped off her look with a pair of gold open-toe heels. For the screening of his movie, Adrien opted for a maroon suit with slim peaked lapels. He completed his look with a pair of lustrous black shoes.

The pair even attended the Met Gala last year together. For the event, the fashion designer shined bright like a diamond in a sparkling silver gown from her own fashion label, Marchesa. On the other hand, her beau Adrien looked dapper in a tux.

The pictures from the extravagant event showed the couple with big smiles on their faces. They walked the red carpet together arm in arm, and Georgina looked heavenly as she posed for the cameras. We must say they look gorgeous together. 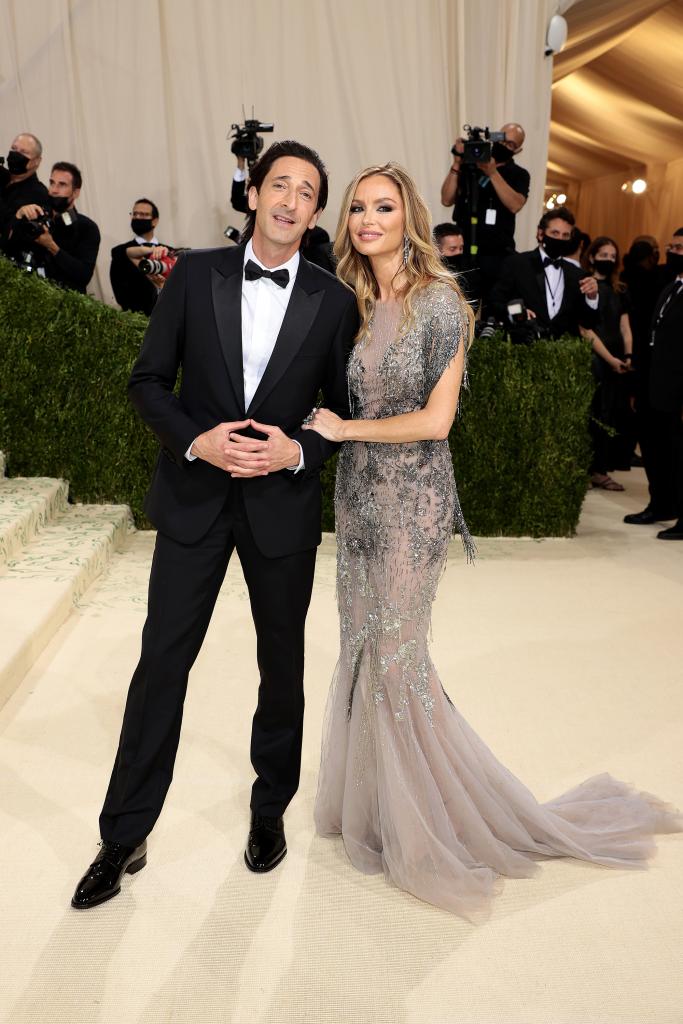 Do you ship Adrien Brody and Georgina Chapman as a couple? Kindly let us know your thoughts on the pair in the comments section below. Don’t forget to stay tuned with us for the latest updates from the world of showbiz.