Where is Ralph Macchio Now? The Famous ‘Karate Kid’ is Back

Ralph Macchio famously played the role of Daniel LaRusso in the Karate Kid movies. He also starred in Ugly Betty, My Cousin Vinny, Eight is Enough, etc. But that was a long time ago. People have wondered where the ‘karate kid’ is these days and what happened to him after the success of the movies.

Ralph Macchio is not a kid anymore, that is for sure. The actor is 60 years old now, but still has that youthful look! He was in his twenties when he starred in the movies. Talking about how he manages to look so young, he joked “Listen – I blame my parents”.

He said that they both looked young for their age and that their genes were passed down to him.

He also mentioned how there has rarely been a day where the Karate Kid was not mentioned to him as everyone still recognizes him. The suburban father also joked about how “It’s a rare sporting event I go to when I don’t hear (the song) You’re the Best Around.”

Back in the day, the first installment of the movie became a huge hit and went down in history as one of the classic movies. It was made on a budget of $8 million and the movie went on to make an enormous $130.8 million at the box office. If it is adjusted for inflation, the figure rounds up to $248.12 million in today’s time. 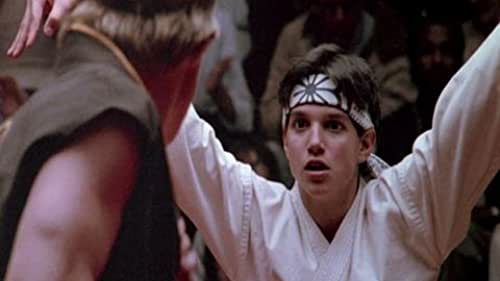 This turned Ralph Macchio into an instant heart-throb. The lower middle-class teenager who turned into the karate kid and beat up bullies became such a huge hit that two more movies followed, Karate Kid II and Karate Kid III.

He was only 27 years old when the third and last installment of the trilogy came out. Contrary to popular belief, Karate Kid was not his first acting gig. In fact, his portrayal of Johny Cade in The Outsiders is what impressed the producers who signed him on for the movie.

Where is Ralph Macchio Now?

Ralph Macchio is back where we like it! The star has made a return to our screens. He can be seen in Cobra Kai. The show premiered on Netflix in August of 2020.

The series takes place about 30 years after the All Valley Karate Tournament in 1984. Ralph Macchio’s character LaRusso is doing well for himself as a big businessman, but he still struggles to continue his life without the wisdom and guidance of Mr. Miyagi. On top of that, LaRusso is forced to face his past rival Johny Lawrence, played by William Zabka. Lawrence seeks redemption for the past by reopening the Cobra Kai Karate dojo and training school kids how to beat up other kids.

Season 4 of the show recently dropped. It received 100% approval rating on the rotten tomatoes and also had a whopping 92% audience score, which means that the people are loving it.

It is a nice nostalgic walk down the lane for people who grew up watching the movie. They now get to see the grown-up versions of their hero fight it out once more.