Top 10 Most Popular K-Pop Groups in the World

Perhaps you’ve been hearing about K-pop all over the place recently and have decided it’s now time to give it a try. You’ve arrived to the correct location. If you’re unfamiliar with the term, K-pop stands for Korean Pop, and it is quite popular all over the world. This music genre encompasses a wide range of genres, including pop, rap, R&B, EDM, rock, and more. But K-pop isn’t just about the music, which is why it’s so addictive: sleek choreography and wild music videos are also important aspects of Hallyu, the Korean cultural tsunami that’s sweeping the globe. 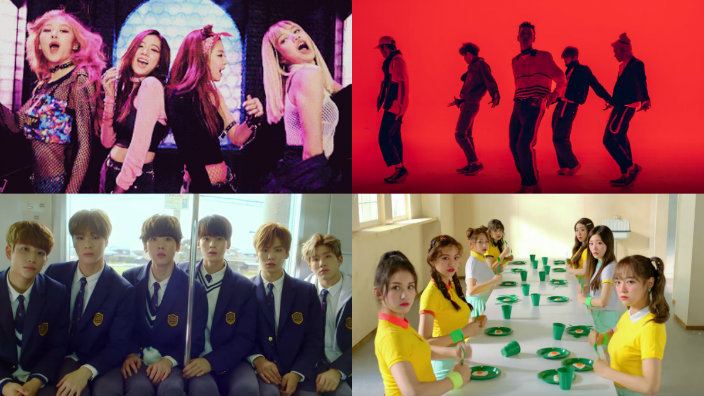 My own playlist of suggestions is endless, but there are a few names you should add to your playlist right away to get you started with some addictive tunes. Here are 10 K-Pop you would definitely love.

Disclaimer: Before we go any further, it’s important to note that this list is entirely based on the author’s personal tastes. Each of the groups on the list are incredible in their own way, and the article is not meant to be a comparison. Every group in the list is listed in random order, not in order of superiority.

It will be difficult to say goodbye to Jennie Kim, Lisa, Jisoo, and Rosé once you have welcomed them into your life. BLACKPINK is one of the most prominent K-pop groups of this age, and their songs are all hits—I challenge you to listen to one of their songs and not have it stuck in your brain for days. They’ve made music history over the years with their dynamic and bold tunes, as well as incredible choreography that you’ll feel compelled to learn.

Do you want a band that can provide you with any genre you can think of? Look no farther than (G)I-DLE, who effortlessly combine everything from tropical house to Latin music to hip-hop and trap without missing a beat. What’s cooler than that? (G)I-DLE is heavily involved in the creation of their music, with members Soyeon, Minnie, and Yuqi contributing their composition and production skills to their albums.

TWICE is one of the most addicting South Korean acts to see, thanks to its melodious tunes and eclectic mix of styles. The nine queens of the bubblegum style were destined for popularity from the moment they debuted in 2015, with a sound as glitzy as their personalities. It’s been hit after hit after hit since then! Pick any of their singles to get you started, but keep in mind that you’ll need a lot of space to dance.

You’ll find this group’s ardent fans screaming their tried and tested battlecry “STAN LOONA” in the responses to any viral tweet. This unwavering support has unquestionably been earned by the 12-member collective. They’ve got legendary K-Pop anthems that will get stuck in your head, as well as incredibly innovative visuals to match. To start your journey to LOONA standom, I recommend the tracks “Butterfly” and “Hi High.”

The bad guys of K-pop are deserving of a slot on your playlist. Monsta X’s popularity continues to rise, with songs topping several music charts and breaking hearts all over the world, and you’ll see why the minute you press play. Every Monsta X song is a realm you’ll want to immerse yourself in, bringing hip-hop, EDM, and pop to the table. In the songs, layers and layers of passionate vocals meet impassioned rap lines, instantly turning you into a Monbebe.

You get the best of both worlds with Irene, Seulgi, Wendy, Joy, and Yeri: the sweet and the bold, the glittering and the sexual, the red and…the velvet? They are, believe me, highly addictive. For the past few years, the trio has been shaking up the charts all over the world, continually surprising its fans with new sounds, concepts, and English versions of their classics.

EXO has grabbed the hearts of their fans for a reason…or, well, many reasons, with strong vocals, good-boy-gone-bad vibes, and music videos you won’t be able to stop replaying. This nine-member group has been on the market for nine years and has been charting since the beginning.

EXO has tried every notion you can think of while reinventing themselves—sexy, cute, bad boy, effervescent, and so on—and they’ve done a fantastic job with each one.

Do you want to round up your playlist with some classics? Girls’ Generation is exactly what you’re looking for. While the performers no longer play as a group, there’s a good possibility they were the ones who introduced you or someone you know to K-pop in the first place.

Their unique electro-bubblegum sound evolved over time, and their audience witnessed them transform from girls to women right before their eyes, stealing a place in everyone’s heart for the rest of their lives.

You know, k-pop isn’t only about groups? There are other soloists creating history as well, and Sunmi is one to keep an eye on. Sunmi specialty is effervescent dance tracks with vivid vocals, and just wait until you witness her dancde routines. She also produced a fantastic OST.

Is it possible to discuss K-pop without mentioning BTS? I don’t believe so. BTS is, without a doubt, the most popular K-pop group on the planet, and for good reason. Among their achievements are becoming the first musicians in iTunes history to have eight songs chart at number one in 100 countries, breaking the record for the most viewers for a YouTube debut, and destroying a US stadium tour.

Isn’t it amazing? The group, which consists of three rappers and four vocalists, incorporates hip-hop, pop, some EDM, and rap into their discography, while also addressing love and mental health issues through their songs. It only takes one look at one of their videos to see why they’ve become such a worldwide sensation.

So, here’s the author’s top ten k-pop groups that you should add to your playlist. I hope you enjoyed reading the article.