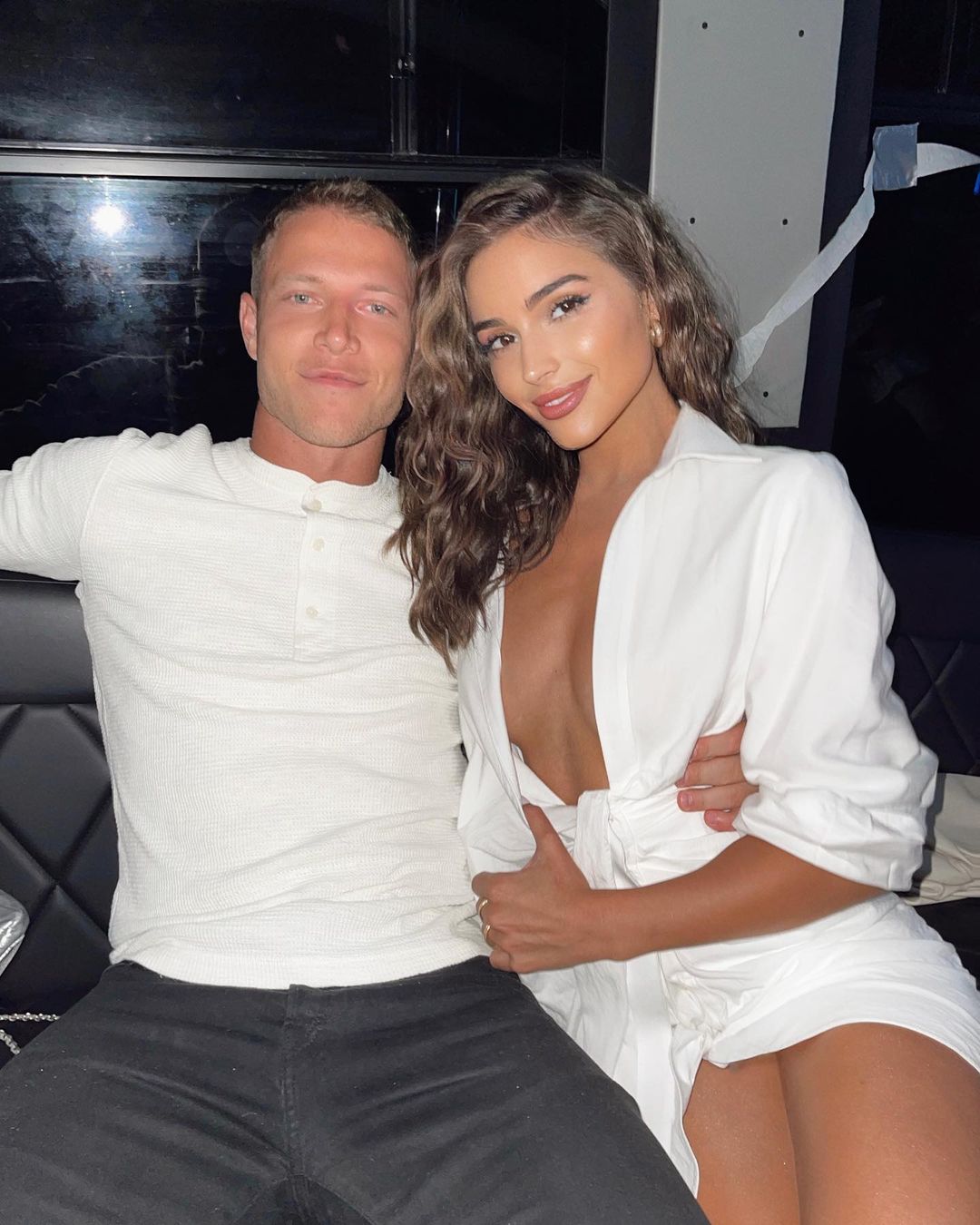 On Thursday, the American fashion influencer took to her Instagram to pay a beautiful tribute to her beau Christian McCaffrey. She posted a series of photos of herself and her boyfriend on the social media platform Instagram.

“Three years ago I was not looking for a relationship. When my best friends Kristen & Tyler called me and asked if I would be open to meeting their friend Christian I was apprehensive. I was worried it would be the same old story all over again and that all guys were the same”, Olivia wrote alongside the carousel of pictures.

The model further added, “While my expectations were low, I knew I couldn’t close myself off and make decisions based on fear. I love this photo (the 2nd pic) that Kristen snapped when he wasn’t looking, waiting to meet me for the first time, so sweet, vulnerable and humble (and with the flowers, I can’t ) I’m so grateful for the voice inside me that told me to give love another chance.”
Culpo concluded by saying, “The yin to my yang, you are the epitome of strength through humility. Thank you for being my rock and restoring my faith in love. You are everything I ever dreamed of and more ❤️ ❤️”

How did Olivia and Christian meet each other?

These two lovebirds were introduced to each other through their mutual friends Kristen & Tyler. Then, the model wasn’t even looking for a relationship. During an Instagram live session in the year 2020, Culpo spilled the beans on her personal life and at that time she talked about her first meeting with her now-boyfriend Christian and their relationship. 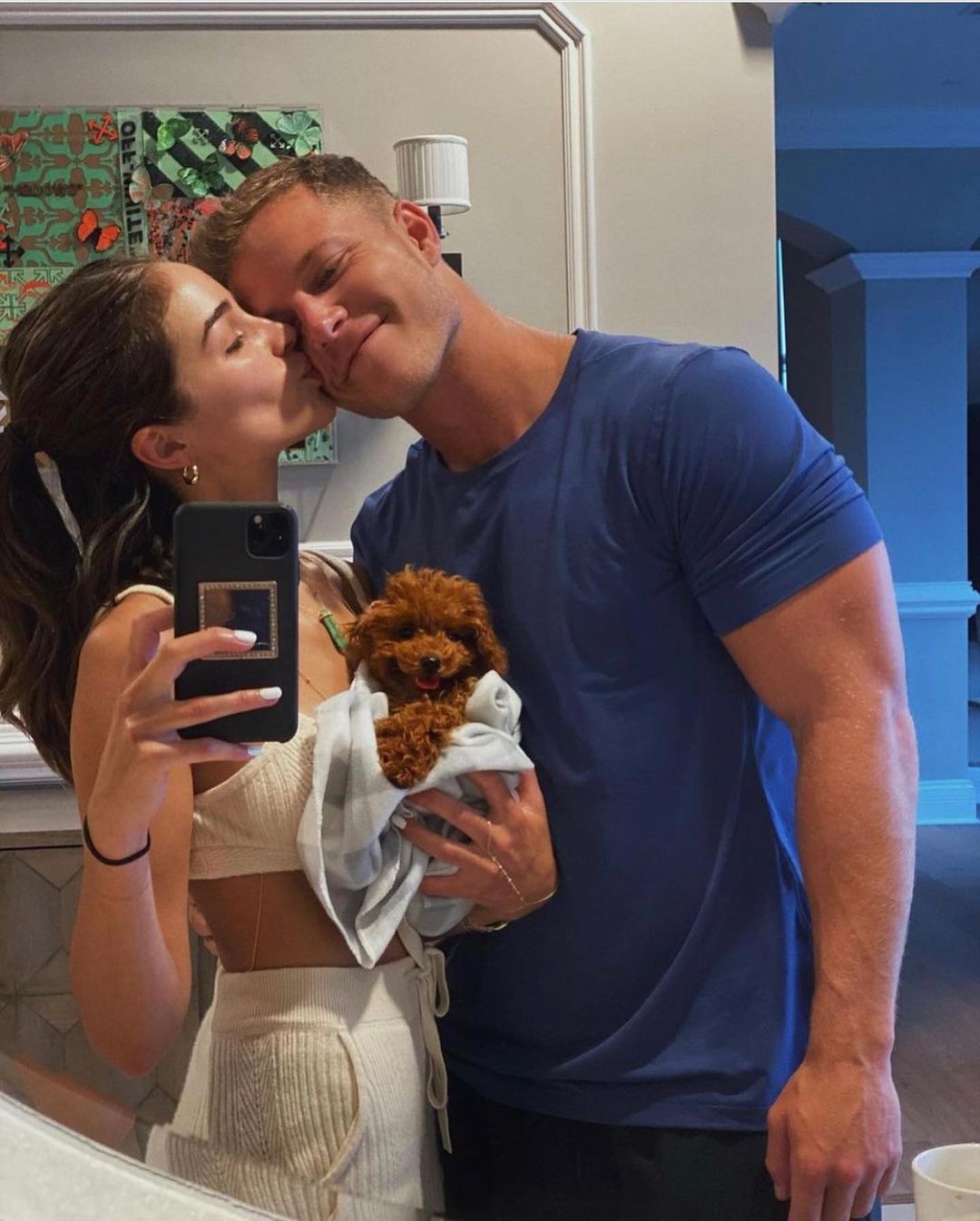 While talking to her fans on the social networking service Instagram, the supermodel went on to say that she was asked by her best friends to meet the NFL player but at first she was very skeptical about meeting him because back in the day she was not interested in seeing an athlete.

Around the time, Olivia thought that dating a sportsperson will not be a good move for her personally as she had a bad dating history with athletes. She was afraid of history repeating itself. Despite all her doubts and thoughts, she decided to get back into the dating game. She began dating the American football running back and we must say we have never seen the model happier in her life. 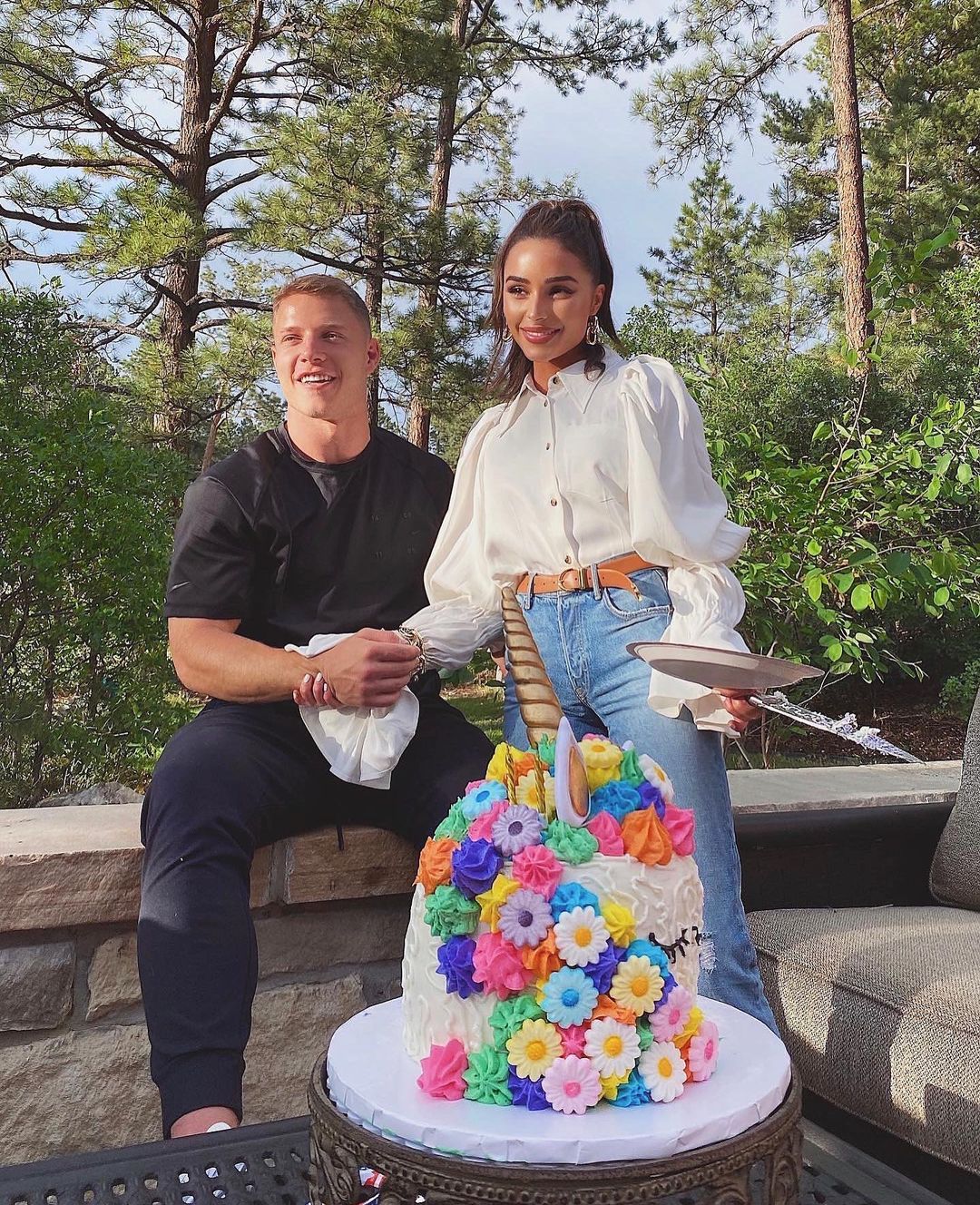 Before the social media influencer and McCaffrey made their romance official, they were spotted out and about in public together many times. In 2019, a close source told Us Weekly, that the lovebirds were already spending time together.

At the time, the Colorado native and his ladylove had been following each other on Instagram. Soon afterward, they were seen holding hands in Mexico and we might add they looked stunning together. As per the reports, the two of them started dating in 2019. 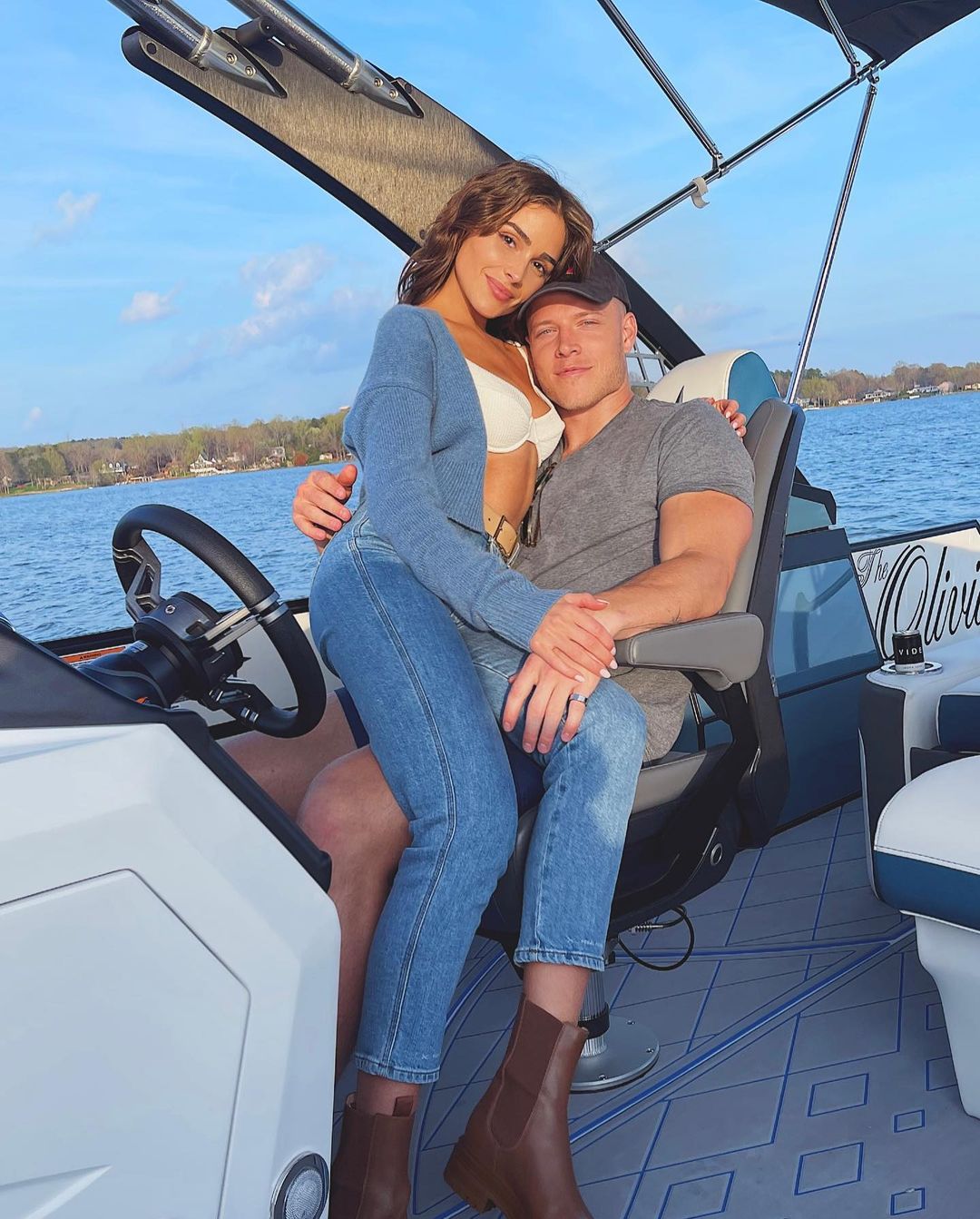 In July of 2020, McCaffrey couldn’t stop gushing over his beautiful girlfriend in an Instagram post. He put up a stunning picture of himself and Olivia on Instagram. Once the 30-year-old made it to the Sports Illustrated Swimsuit Cover, her 26-year-old boyfriend made sure to shower her with love as she achieved another milestone in her career.

Christian played the role of a doting boyfriend and he wrote, “When your gf is on the cover of @si_swimsuit, you do a victory lap on paddle board. A constant inspiration to everyone who knows you! ❤️ ⭐️”, in the caption of the post.

Every now and then, Olivia and Christian can be seen sharing sweet tributes for each other on the social media platform Instagram. They are not one of those couples who shy away from flaunting their love on social media.

Olivia is her boyfriend’s biggest supporter

The social media star Culpo is not just the girlfriend of Christian McCaffrey but she is also the No.1 supporter of the professional footballer both on and off the field. From rocking a  Panther-themed nail design to being by his side through his bad days, Olivia has truly been a perfect girlfriend to Christian.

Olivia dropped a beautiful post on Instagram in June of 2021, on the occasion of their anniversary. She posted a couple of pictures of herself and her lover on Instagram. “I wuv you Christian! Happy anniversary. You are the hardest worker with the biggest heart ❤️”, she captioned the post.

Olivia further added, “Getting to see you work your butt off every single day to make your dreams come true has been such an inspiration to me and your sincerity in everything you do makes me feel like the luckiest girl in the world ❤️❤️❤️ ps your dance moves are 🔥 Love, Owivia.”

Before being romantically linked to Christian, the former Miss USA dated a few other popular faces from various fields including the When You Look Me in the Eyes singer Nick Jonas, NFL players, Tim Tebow, and Danny Amendola. But Olivia’s past relationships with all these well-known celebs came to an end at one point or the other. 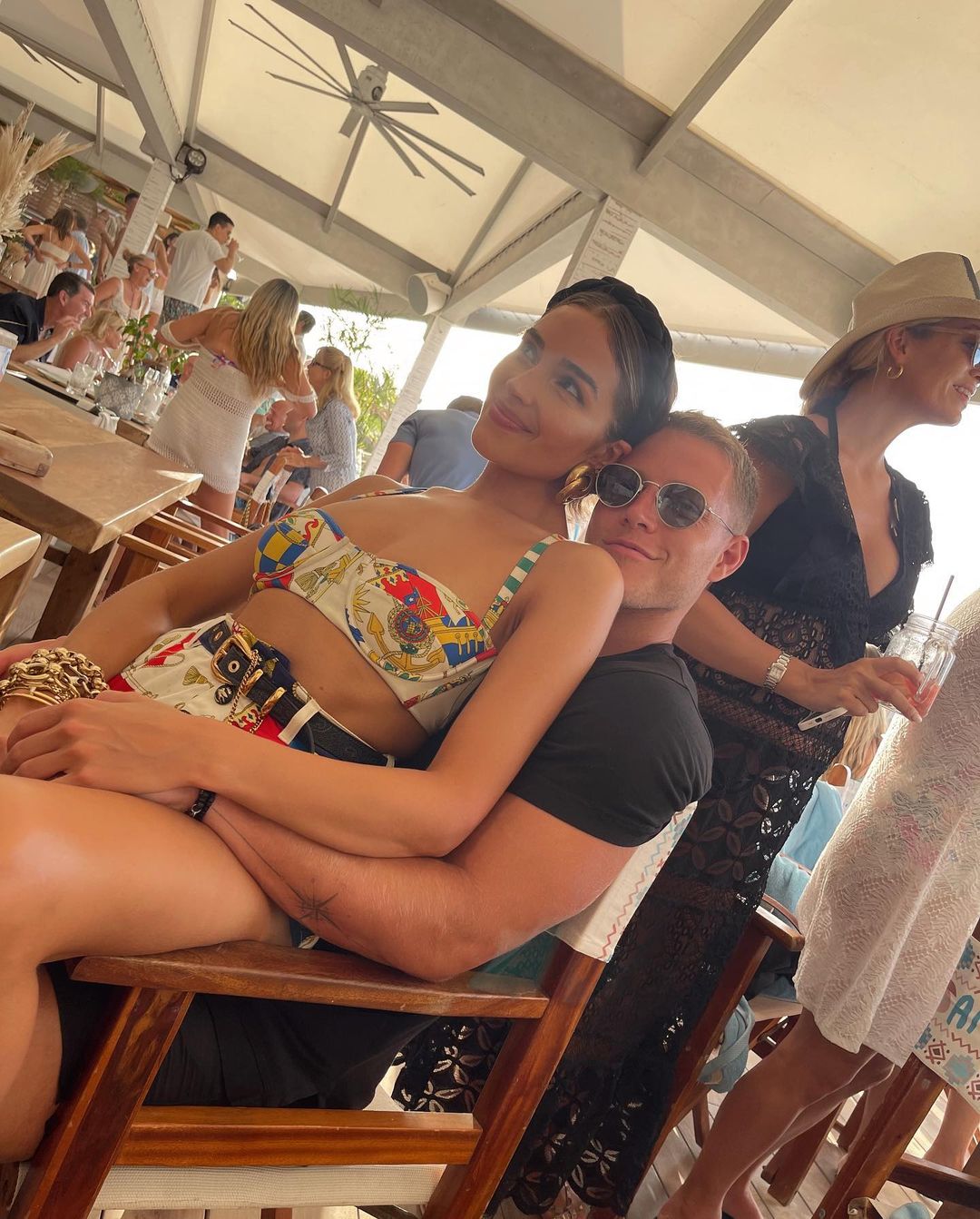 Since the year 2019, Olivia and her boyfriend Christian have been going pretty strong. We are pretty sure that these two are the endgame. They are just couple goals, and it seems like they are just made for each other.

Isn’t the fairytale romance of Olivia Culpo and her boyfriend Christian McCaffrey the sweetest? Kindly let us what you think about their love story in the comments section below. It looks like Olivia has found her soulmate and we are super happy for her. Don’t forget to stay tuned with us for the latest updates from the world of showbiz.