Penelope Disick is the daughter of the former Keeping Up With The Kardashians alum Kourtney Kardashian and her ex-partner Scott Disick. Recently, Penelope made her way to the headlines after she passed a rude comment about her aunt Kylie’s makeup line.

Continue reading further to learn everything about Penelope Disick, the middle child of the Flip It Like Disick star Scott Disick and Kourtney Kardashian. The full name of Kourtney Kardashian and Scott Disick’s only daughter is Penelope Scotland Disick. Kourtney gave birth to her and Scott’s second child, daughter Penelope in Los Angeles, California on July 8, 2012. She got her middle name as a nod to her grandmother’s Scottish heritage.

Penelope was born in front of the Keeping Up With The Kardashians cameras, so she has been in the spotlight since the day she was born. She has an elder brother named Mason Dash Disick and a younger brother named Reign Aston Disick. She likes ballet and she is well known for her adorable antics in reality shows of the Kardashian clan. Penelope and her cousin North West are besties. Every now and then, the two of them are seen posting funny TikToks together and the fans love it.

During an earlier interview with LA Times, Kourtney spilled the beans on her daughter Penelope and she said, “She’s my little muse. I love her freedom she has with fashion, she loves beauty, she has the best personality, she’s really creative and artistic and into music. She’s the coolest little girl in the world.”

Penelope likes to do makeup

Penelope might be only 10 years old but she is already a pro at doing makeup. We must say, she is the next influencer to watch from the Kardashian-Jenner clan. Earlier this week, she shared her makeup routine on the video-sharing platform TikTok. She added Kanye West’s song All Falls Down to the video.

In the TikTok video, the 10-year-old showed off her makeup application skills. She simply captioned the post, “Have a good morning,” with two smiling emojis. She started the video by putting on a pink headband to make sure that the product doesn’t get on her hair which is a good move. Before starting the process of contouring, Penelope prepped her skin with the help of serum. Then, she applied some concealer under her eyes, under her cheekbones, and forehead, and then, she began blending the product into her skin using a beauty blender.

Kourtney’s daughter wanted to add a little sparkle to her makeup look, so she decided to put a tad bit of sparkle eyeshadow on her lids. Soon afterward, she was seen using a balm and lip gloss from aunt Kylie Jenner’s Kylie Cosmetics line for her pout. She topped off her look with a swipe of Mascara.

Then, just like a pro, Penelope took off her headband and showed the end results of her makeup look to the viewers. She concluded the video by waving goodbye to the camera.

Kourtney got bashed after Penelope shared her makeup routine on TikTok

Yes, you read that right. Kourtney faced a lot of backlash after Penelope shared her makeup routine on the video hosting service TikTok. Some of the fans called her TikTok video cute, meanwhile a couple of TikTok users called it inappropriate.

One user wrote, “I can’t believe she is 10 and people are supporting this.” Another social media user further commented, “I have a 10 year old. Just no. They have a only a few more years of pure innocence left before they start learning about becoming an adult.” A user added, “TikTok is over 13 I believe. This shouldn’t even be allowed.” A more understanding user penned, “There’s nothing wrong with a little kid experimenting with make up and stuff but for it to be published to the world to see gives me the irk…I guess I’m ‘old school.’”

Another user also found no harm in the social media post shared by Penelope, and wrote, “Out of all the things to be concerned about, a little girls love for makeup

? Worry bout yourself.”  One user went on to say, “What she’s doing is so minimal it’s not hurting anyone. I had access to eyeshadow and I looked crazy lol.”

Penelope took a dig at her aunt Kylie’s makeup line

Not long ago, a video from the show Keeping Up With The Kardashians went viral on social media. In the clip, Penelope threw some major shade at her aunt Kylie’s makeup line, Kylie Cosmetics.

On Tuesday, a clip of Penelope’s dad Scott Disick having a chat with Kourtney’s sisters Khloe and Kim surfaced on Reddit. In the video, Scott recalled what Penelope told Kylie when all three of them were in a hot tub together. 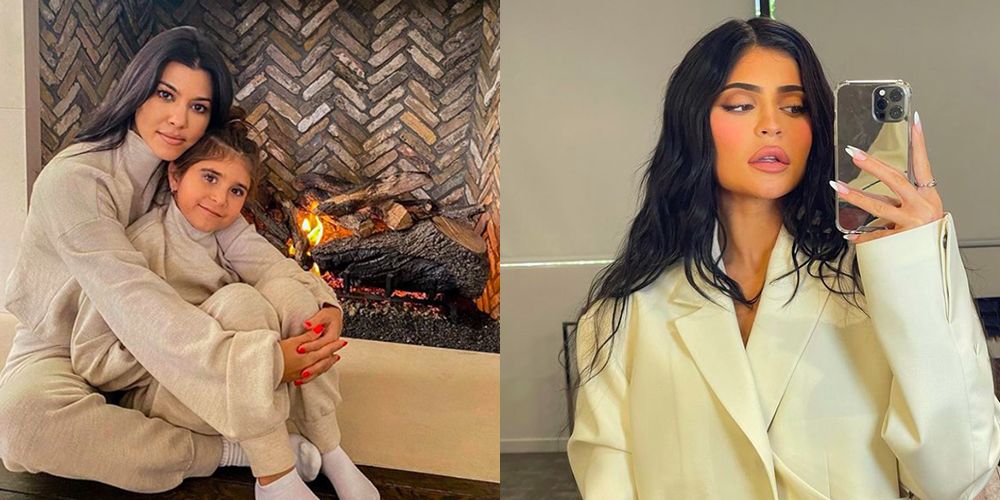 Scott went on to say that Kylie told Penelope, “Listen I’ve always loved you but honestly, now’s the time to really start bonding with me. Because trust me, Kylie Cosmetics could be yours one day.”

Disick further added, “And P looks at her and goes, ‘Yeah Poosh Cosmetics does have a better ring.'” For those of you who are unaware, let us tell you Poosh is the name of Kourtney Kardashian’s lifestyle website, which was launched in the year 2019. As per WWD, Poosh is the nickname of Kourtney’s daughter Penelope.

How did Penelope react to her mom Kourtney getting engaged to Travis Barker?

Kourtney told her daughter Penelope about her engagement to Travis on FaceTime and she said, “Do you wanna know what my surprise was? We got engaged!” Kim joined her sister and added, “Look it, mom got a ring!” Penelope started to cry over the phone and she hung up. In an episode of the Hulu’s show The Kardashians, Kourtney said, “I think Penelope took it hard. I think it’s a big change for her, and even though she loves Travis I think she doesn’t know what [the engagement] means. Like is that taking me away? I think she just doesn’t know what it means.”

We must say Scott Disick and Kourtney Kardashian’s daughter Penelope is a true fashionista in the making. Don’t forget to stay tuned with us for the latest updates from the world of showbiz.