Lisa Marie Presley, daughter of the legendary “King Of Rock And Roll” Elvis Presley, passed away at the age of 54 on Thursday (January 12). The singer-songwriter was rushed to hospital on the same day following a cardiac arrest.  As the gorgeous lady leaves the world, here’s what she’s left behind in terms of family. Read on to know everything about her children. Lisa Marie Presley started daring Chicago-based musician, Danny Keogh in 1985 and the couple married after three years on October 3. 1988. Lisa was just 20 at the time. The news of their union was announced by her mother, Priscilla, who said at the time: “I am thrilled for Lisa Marie. Danny is a great guy, and I couldn’t be happier for the two of them.”

She gave birth to her daughter, Danielle Riley Keough, was born on May 29, 1989. In 1992, they welcome their second child, Benjamin Storm, who sadly committed suicide in 2020. The couple, however, divorced in May 1994 but remained on amicable terms thereafter. Lisa Marie Presley’s daughter, Riley Keogh (33) debuted her film career with the musical biopic “The Runaways” in 2010 wherein she portrayed Marie Currie. Since then, she has starred in several movies like, “The Good Doctor”, “Magic Mike”, “Jack & Diane” and “Mad Max: Fury Road”.

Riley began modeling in 2004. Her breakthrough role came with the first season of the anthology series The Girlfriend Experience. The series receievd critical acclaim and earned her a Golden Globe Award nomination. In 2020, Riley appeared in a supporting role in Netflix’s The Devil All the Time. Her latest project includes the upcoming series Daisy Jones & The Six, where she plays a free-spirited musician.

However, last year in May, she made her directorial debut with “War Pony” at the Cannes Film Festival. On the personal front, she is married to Australian stuntman, Ben-Smith Peterson, whom she met on the set of “Mad Max: Fury Road” in 2015. Riley has always been open about her love for her grandmother and now-deceased mother.

The trio was often described as “the Presley women”. During an interview with Oprah Winfrey, she revealed how her grandmother and mother, Lisa let her grow up to be her own person, instead of being shadowed by her grandfather’s figure. But again, Elvis always played a prominent role in her life even though she never got to see him.

Benjamin’s friend, Brandon Howard, spoke about his struggle with mental health and “pressure” to live up to the Presley name. “Sometimes he struggled with depression, which is a serious thing with [the COVID-19 pandemic] and everything happening right now and everybody being locked in the house,” he said.

“It’s a tough thing when you have a lot of pressure with your family and living up to a name and an image. It’s a lot of pressure. It’s almost like you’re pressured into having to be a musician, having to be an actor. It was good for him to go around the world and discover himself and have his own friends,” Brandon added at the time of Benjamin’s death. Benjamin’s sister Riley has openly mourned the loss of her younger brother. She also got a tattoo as a tribute to her late brother. The Golden Globe Award nominee previously shared a photo of herself and her brother on Instagram: “Two months without you. I would give anything for 1 more minute with you little brother,” she wrote.

Later, she revealed in an interview about how tough things have been for her without her brother. It had been “a year of feeling like I was thrown into the ocean and couldn’t swim,” Riley revealed. “The first four or five months, I couldn’t get out of bed. I was totally debilitated. I couldn’t talk for two weeks.” Soon after her divorce from Danny, Lisa married Michael Jackson, who was introduced to her by her father when she was just 7. “I am very much in love with Michael, I dedicate my life to being his wife,” she revaeld about Jackson, who died in 2009.

“I understand and support him, we both look forward to raising a family,” she spoke about Michael back then. However, the two ended their relationship after two years. However, the ex-couple didn’t have any children together. 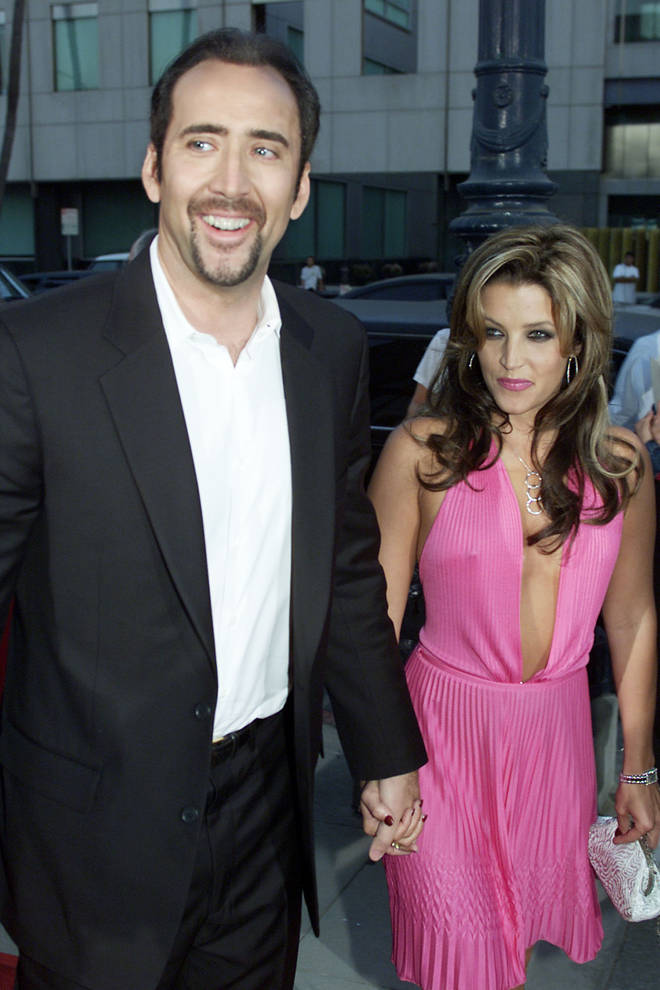 Lisa Marie Presley’s marriage with Nicholas Cage was extremely short-lived.  Lisa was engaged to Hawaiian-born musician John Oszajca but called it quits after she met Nicholas Cage. The two married in a secret ceremony but their marriage lasted barely for four months. She didn’t have any children with either of the stars. Lisa’s love story with Michael Lockwood resulted in a gruesome custody battle for her two children, Harper and Finley Lockwood. She married Michael in 2006, but the couple divorced in 2021. She gave birth to twin daughters: Harper Vivienne Anne and Finley Aaron Love, born on Oct. 7, 2008.