Nicolas Cage is one of the older, more popular movie stars. Over the decades of his active years in Hollywood, he has dated a number of beautiful women, married some, and also divorced most of them.

The National Treasure actor has had an interesting dating life and people want to know all about it. The actor believes that he finally “got it right” when he married his much-younger girlfriend Riko Shibata at the beginning of 2021.

Let us take a closer look at the past relationships of Nicolas Cage and what happened between them.

The rumor of the two of them dating started in 1987. Back then, neither of them confirmed or denied the relationship. However, appearing together for a public event is often looked upon as a sign of confirmation of two people being together in a relationship. 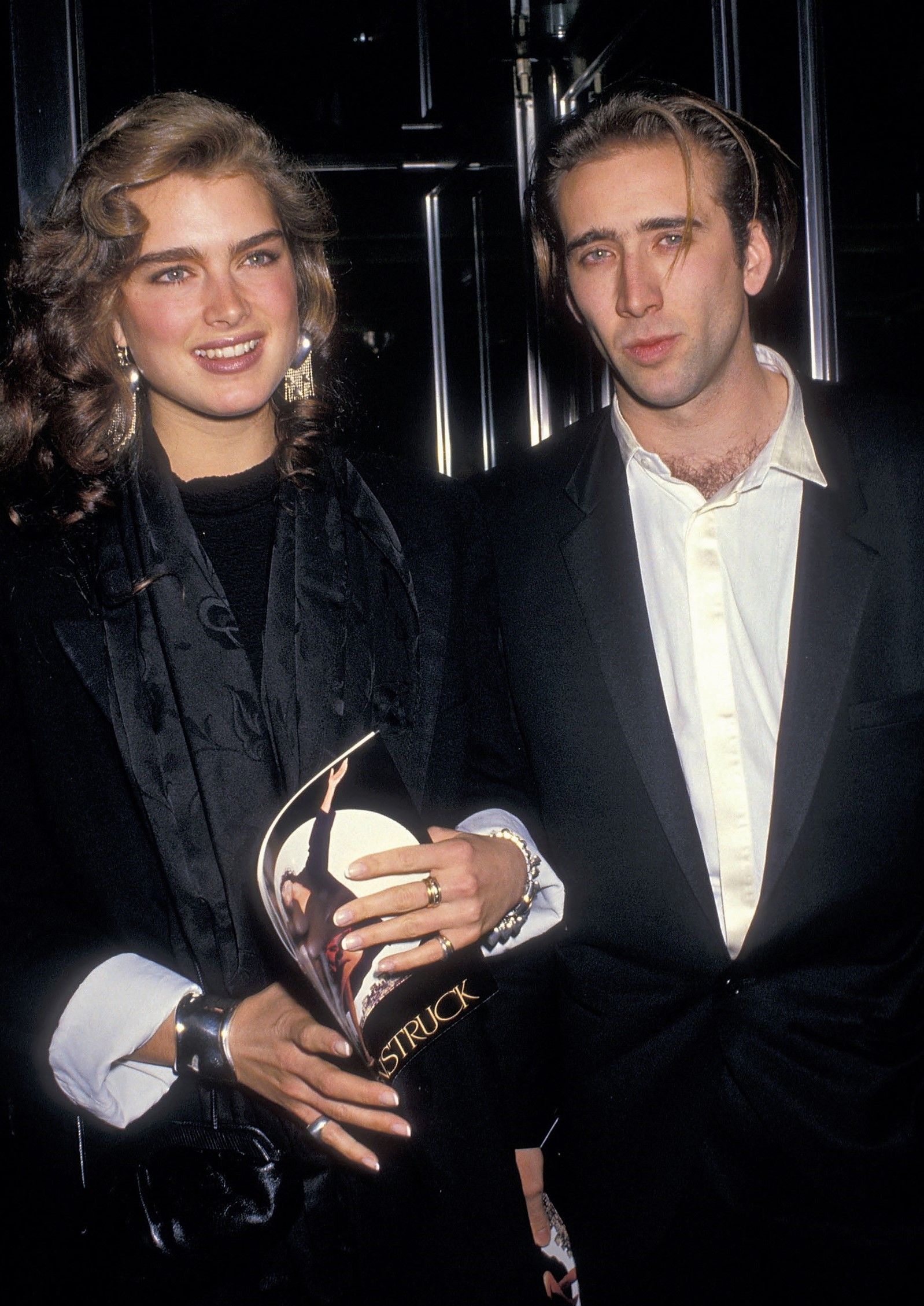 So when Nicolas Cage and Brooke Shields appeared together for the premiere of the film Moonstruck, rumors started going around of the two being together. Whether they really were a couple was not acknowledged or denied by either one of them.

After about a year, Nicolas Cage moved on to Dolenz. They dated for a couple of months, although their romance was lowkey and the public did not know much about their relationship. Together, they attended the premiere of And God Created Women in March 1988. 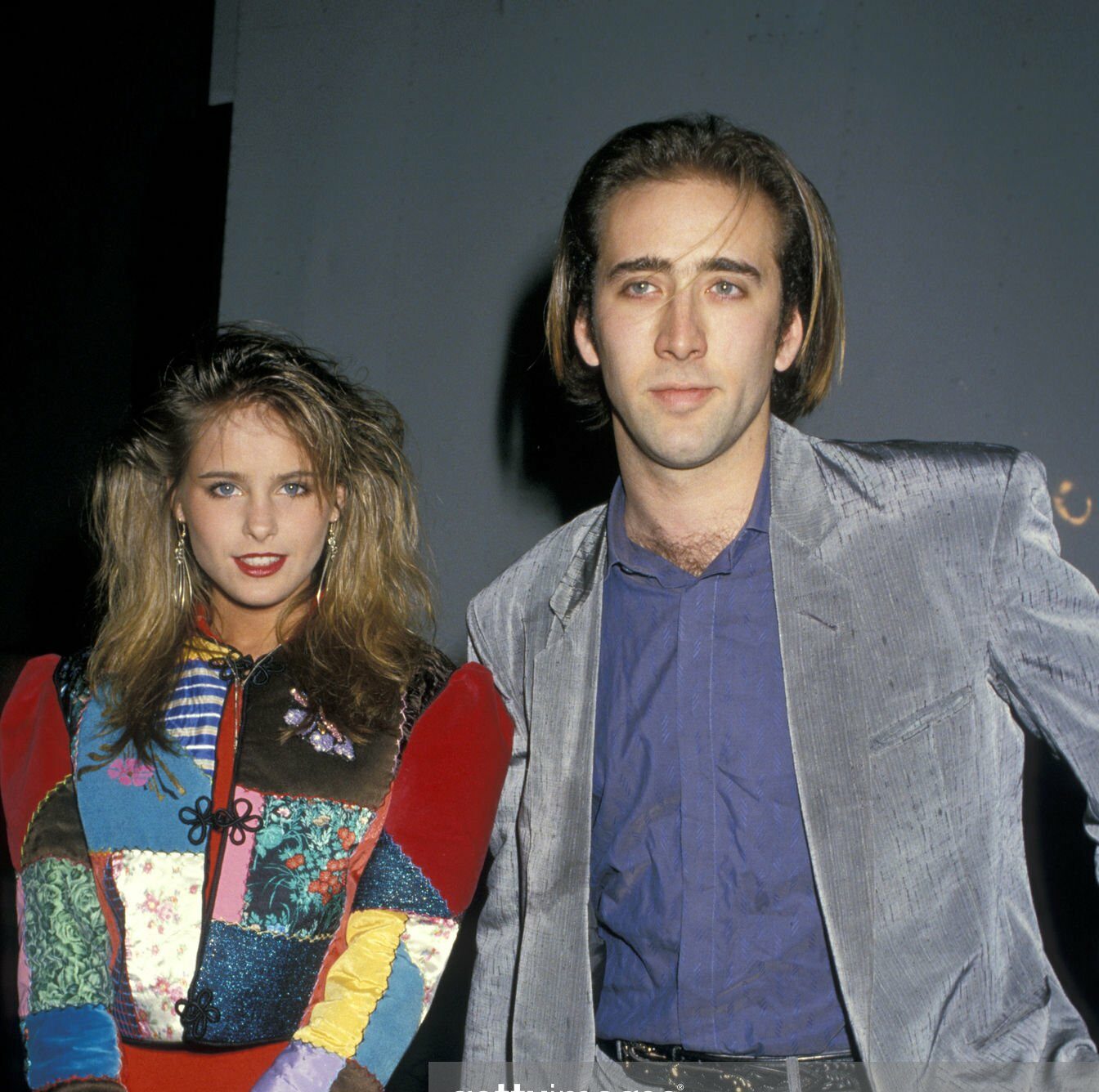 The couple’s relationship was rather short-lived and they broke up sometime later.

In 1988, Cage began dating fellow actress Christina Fulton. The couple were together for a couple of years and even had a son together. Their child, Weston Coppola Cage was born in 1990. Shortly after they welcomed their first child together, they broke up. 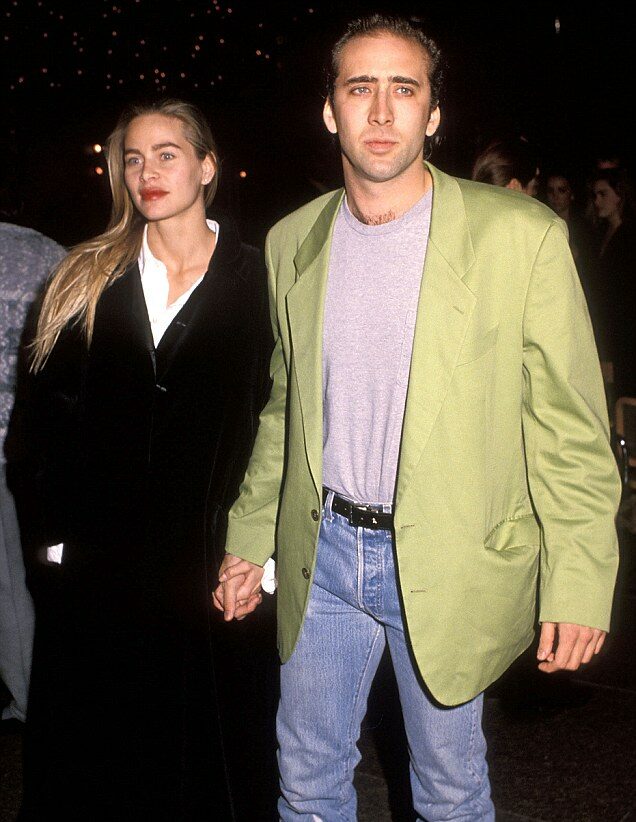 In an interview, Fulton said “For 18 years, I raised Weston so Nicolas could go be Nicolas Cage, and go be a superstar, and he did. So I raised this boy, 24-7 we were glued to the hip.”

However, Weston started living with him in 2011. He was put on psychiatric hold after an incident outside a Hollywood restaurant. This brought the couple back into the headlines. Fulton was upset and blamed Cage for their son’s “downward spiral”.

She also went on to sue him for unpaid taxes and the home where she raised Weston. Cage called this “unfortunate and inappropriate”. Two years after this, both of them decided to settle outside court.

After the initial split from Fulton, Cage found comfort in the arms of Stothard. However, this rebound relationship did not last long, but they did attend the premiere of Wild At Heart together. 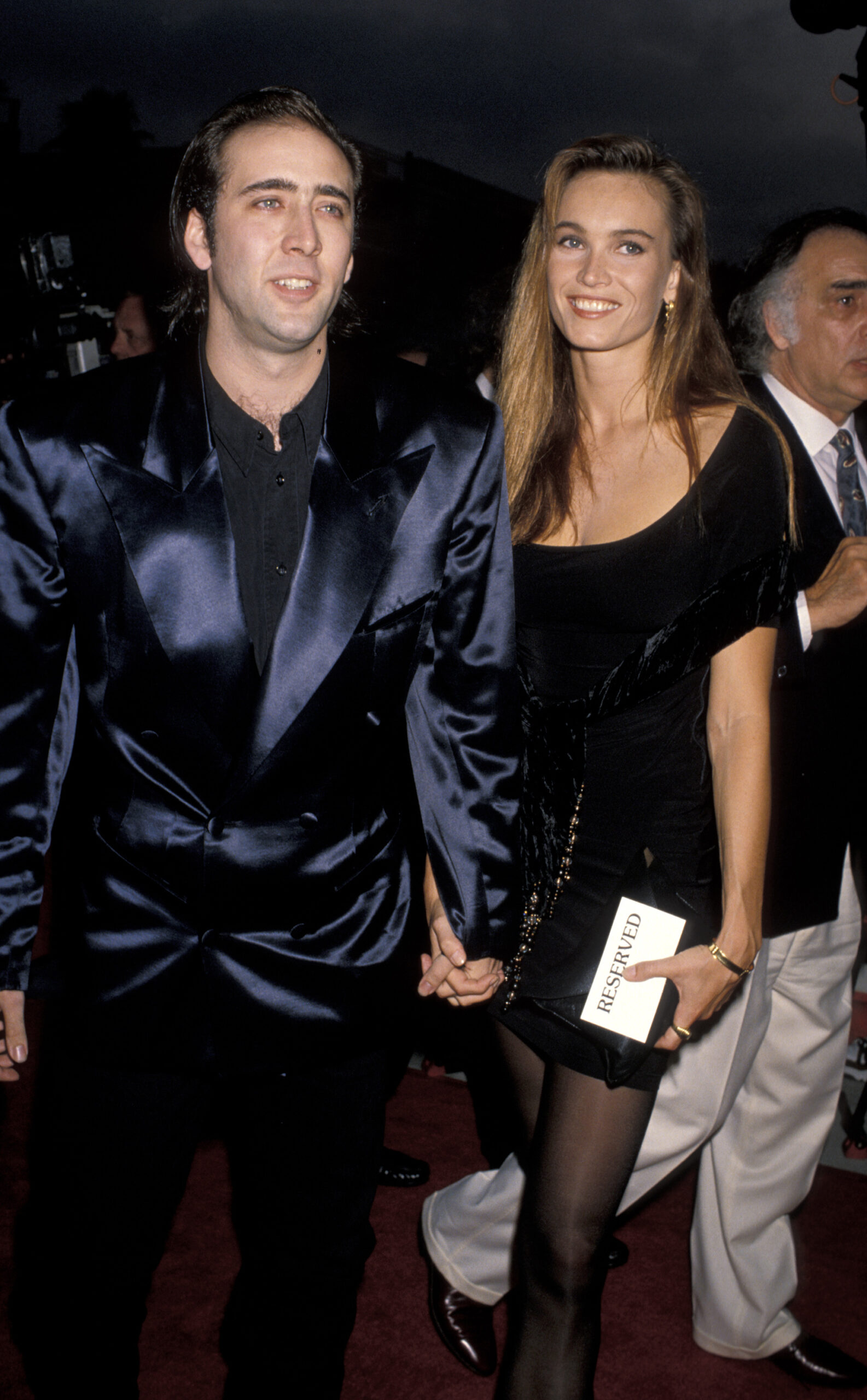 Nicolas Cage started seeing Kristen Zeng in 1992. Back then, she was just a teenager while he was about 28 years old. They dated for two years and Cage reportedly even popped the question when she was only 19 years old. The two of them ended up parting ways.

Nicolas Cage and Crispin Glover ran into her at a restaurant. Both of them were smitten by her and Cage even pursued her after their first meeting. He went ahead and asked her to write a list of things he could get to show his worthiness for her. Hesitantly, she obliged after adding things like J.D. Salinger’s autograph and a black orchid, which does not really exist. After Cage was able to collect an impressive list of items on the list, Arquette agreed to go out with him.

Although she was “scared” by his persistence, she agreed to go with him on a trip to Cuba. However, there was an issue with their layover and Cage had an angry outburst, which scared Arquette away for good.

But their fates had other plans. The two of them met again almost a decade later. After spending only two weeks together, they got married in 1995. The short ceremony took place in Carmel, California, and was only attended by the police chief.

The two of them got divorced after 5 years. Arquette said that they lived separately for some time repeatedly as they fought a lot. The marriage was said to have ended mutually and respectfully, but Cage did mention that the two had not spoken in a long time.

The two met at a party in 2000 when Cage was estranged from his first wife. Cage was said to be more obsessed with Lisa Marie Presley’s father, Elvis. He even said that he looked at Lisa Presley as the daughter of the great Elvis. 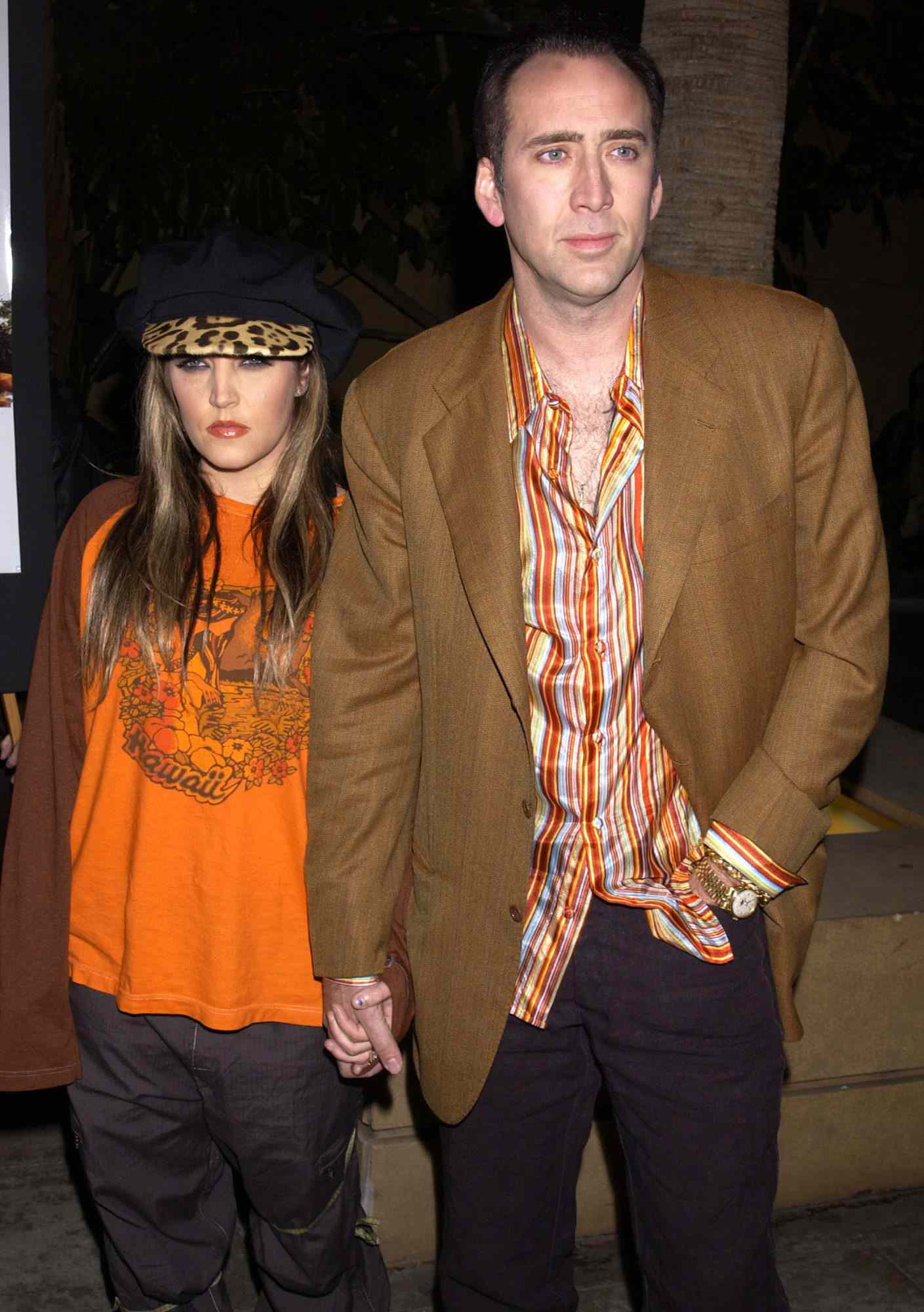 However, the two of them did get together. They broke up and got back together several times before getting married in 2002. They remained married for 3 months and a few days before filing for divorce.

They said that the relationship did not work out as both of them had “intense” personalities. They remained friends even after parting ways with Cage saying that they shared a lot of “laughs together”.

Cage met Alice Kim while she was waitressing in a restaurant. She was only 19 years old at the time. The couple was soon married so that she could accompany him to South Africa where Cage was shooting for Lord of War. All of this happened just a few months after he divorced Lisa Presley. A year later, Kim and Cage welcomed their son Kal-El. Cage spoke highly of his wife and gave her the credit for having a stable lifestyle. The couple’s marriage survived for about a decade. Cage admitted that the divorce was a “shocker” and that he did not see it coming.

He said “She was quite young when I married her and I don’t really have any ill will towards what happened. That’s all I’ll say. And now it’s like, wow, I’m 54 and I’m single again – I didn’t see that coming! It’s pretty grim.”

Nicolas Cage found solace soon after when he started seeing Erika Koike in 2018. The couple took their time knowing each year for a year, then they got married in 2019. However, the marriage only lasted for about 4 days. Cage later revealed that he was too drunk when Koike suggested that they get married. He also alleged that she hid “the full nature and extent of her relationship with another man” along with her criminal history and “active criminal proceedings”.

He refused to talk about the relationship and said that “I was pretty upset about that and the way things happened”. Koike even sued Cage for spousal support after 4 days of a short marriage.

Cage met Shibata while he was on a visit to Japan where he was shooting Prisoners of the Ghostland. He found her to be “stunning” and found that they had a lot in common. They dated for several months before COVID happened and split the two up. 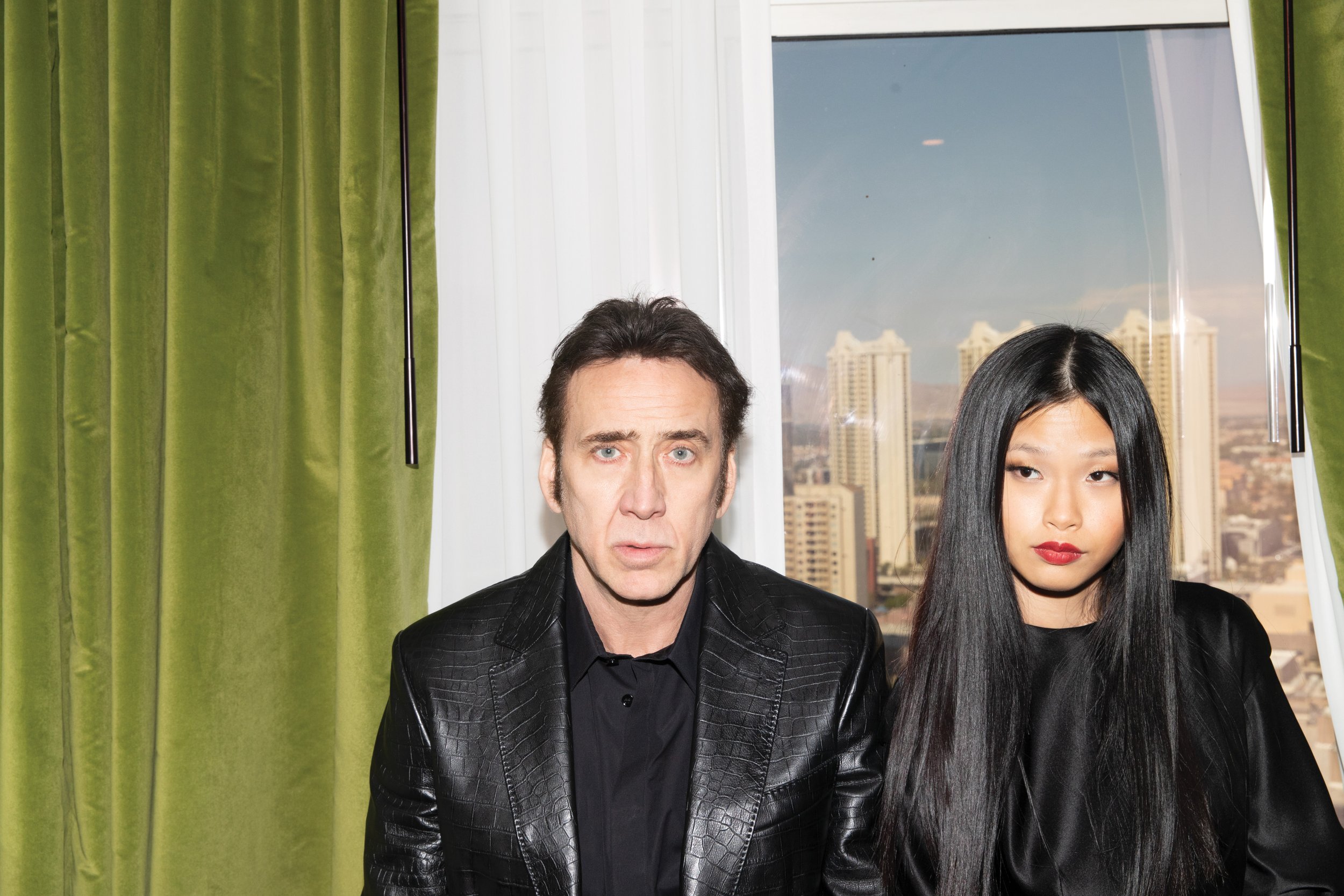 By that time, Cage was head over heels in love and proposed to Shibata over FaceTime. He also FedExed an engagement ring to her. They survived the long-distance relationship to come together and marry in Las Vegas on February 16, 2021. They got married on Cage’s late father’s birthday to pay tribute to him.

The ceremony is said to have included “traditional Catholic and Shinto vows with poetry from Walt Whitman and Haiku sprinkled in.” The 30 years of the age gap did not create any issues between the couple.

Becoming A Father At 58!

Earlier this year, the happy couple announced that Shibata was pregnant. The two of them were very happy to welcome their baby into the world. At the beginning of September, they welcomed their daughter August Francesca.

Before becoming a father, he said that “My boys are all grown up, and I miss going to the toy store. I miss singing lullabies and rocking in the rocking chair.” Although many guys dread becoming a father in their 50’s, Cage is “looking forward to getting back to that”. Although some of Cage’s past relationships have been nothing less than dramatic, Cage did not let it affect his professional commitments. He has been in the movies for over decades and has collected some prestigious awards during that time. He has won Academy Award, Golden Globe Award, Screen Actor’s Guild Award, etc. Apart from being an actor he also donned the hat of being a film producer.

While Leonardo DiCaprio got so much hate and backlash for dating younger women, Nicolas Cage also did that. In fact, some of the women he dated and married were much younger than the women DiCaprio dated.

Nicolas Cage certainly had a tumultuous love life. But if something could be made off of his 4-5 marriages, it is that he fell in love hard and fast. He often got married quickly after meeting someone and then figured out that they were not compatible.

For now, the couple is doing well and is spending a lot of time with their new bundle of joy. Due to past experiences, the couple chooses to keep most of their personal lives private.