Brie Larson stopped by at the “Jimmy Kimmel Live” show for some adventurous talks. From getting her own Captain Marvel Roller Coaster to reaching the top of the Grand Tetons, the Academy Award-winner is living the best life. For her, Captain Marvel has transformed her life completely. Read on to know all about this conversation. 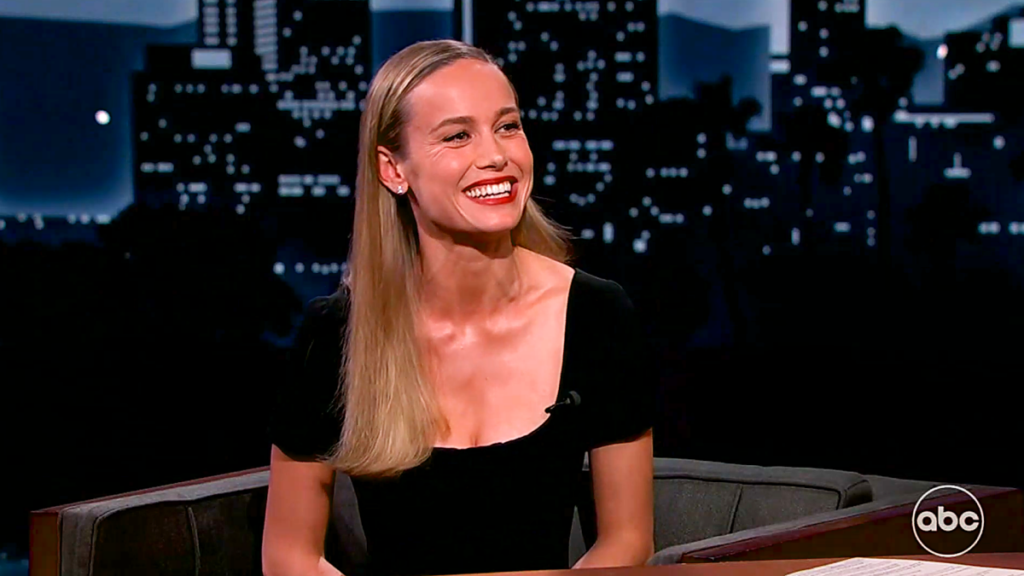 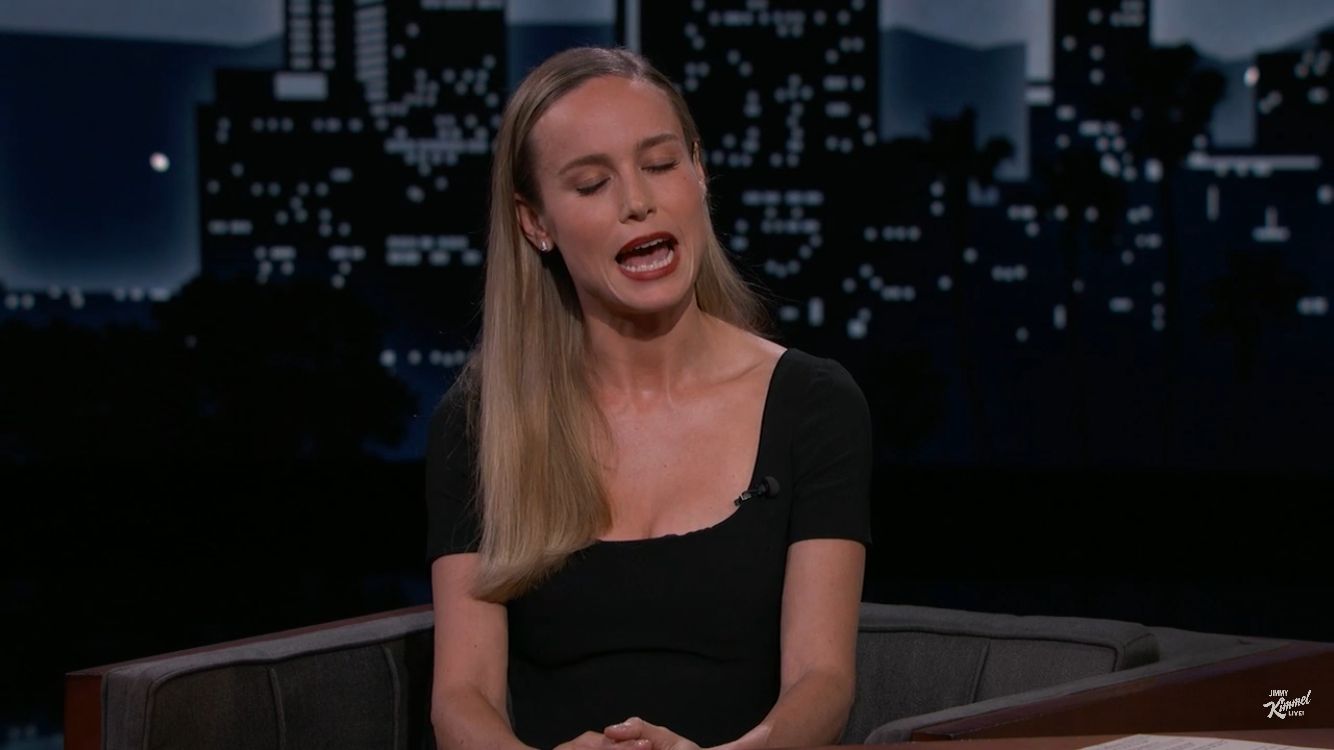 Brie Larson, 32 was greeted by the “Jimmy Kimmel Live” host, Jimmy Kimmel, who revealed that the “Captain Marvel” is all set to come up with two new projects on Disney+, which include a docuseries “Growing Up” and a short film “Remembering”. Brie entered the show in a black bodycon dress and was reminded about hosting the “Jimmy Kimmel Live” show and now, she was a guest here.

Regarding the recent Avengers ride at Disneyland, Jimmy Kimmel revealed that he had his son on the roller coaster ride. He said that he was a little confused as everything happens so fast, the door just opens up and you’re suddenly in the bright light. Now if you aren’t aware, Disneyland added a roller coaster called “Avengers Assemble: Flight Force” recently.

The ride features an exciting team-up between the Marvel Cinematic Universe’s Iron Man and Captain marvel. Speaking about the ride, Brie Larsen stated that her ride is actually not like that. “It’s a more light fair, just a fast roller coaster hang out with Captain Marvel, you know, save the world, blah blah blah,” she said while explaining the ride.

Previously, Brie Larson got emotional when the ride was first introduced at Disneyland, and why not, she is one Marvel hero who lives up to the character. When she first experienced this ride, she was away by the work put into it. “To see it all, the emotions were all over the place… This is the dream,” she revealed in a previous interview. Brie Larson told Jimmy that she even got her whole family on this ride because she is a big Disneyland fan. Jimmy joked, “Did they put your ride at Disneyland Paris because your name is like Bree?” As the conversation continued, Jimmy said, “It would be fun to throw up on your ride, it would be a thrill.” Brie replied, “Not so sure about that.” 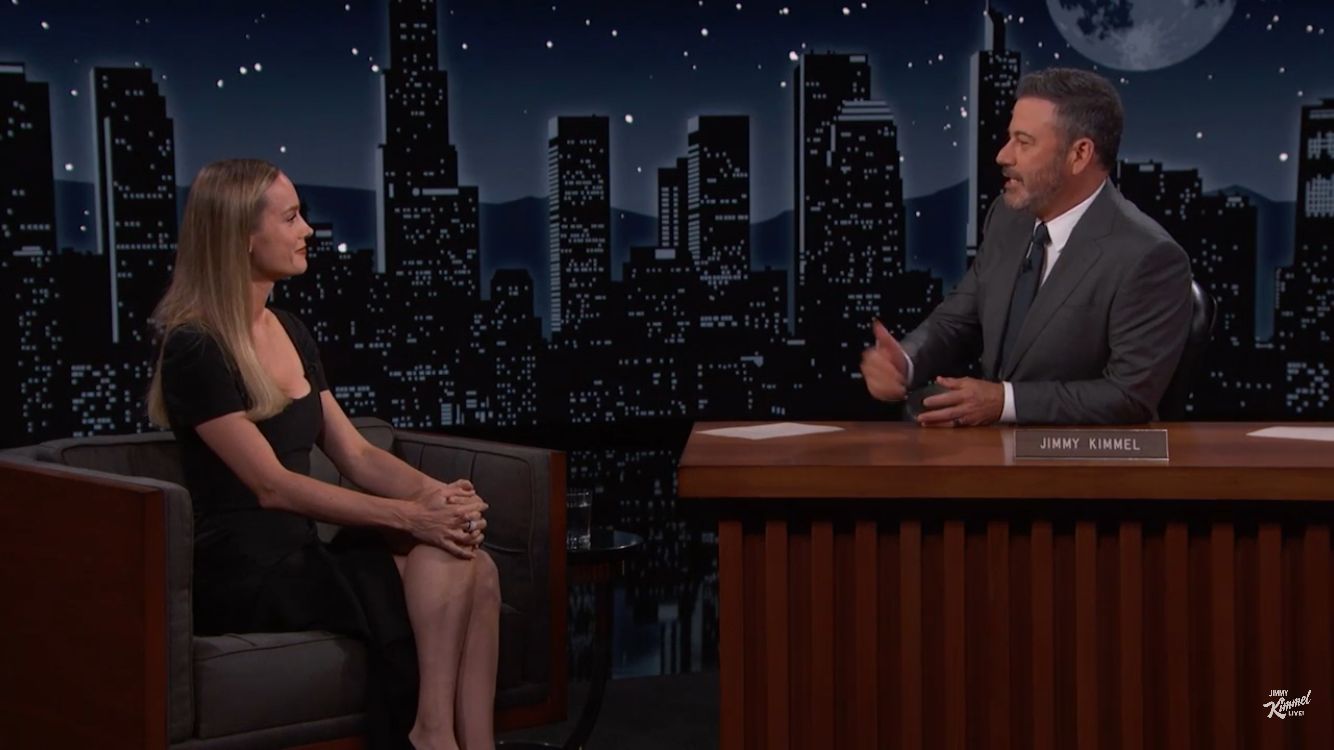 Jimmy posed a question, “Were you like a workout nut before captain marvel? Brie replied, No.” Jimmy then asked, “Did that get you into it?” Brie replied, “Yea, now I am into it out of fear..failure.” Larson said that she thought she was supposed to do her own stunts. When the MCU cast her, they weren’t aware that she was an introvert person with asthma and made a mistake.

For this reason, Brie Larson started training and learnt that she was much stronger than she actually thought. She realized that it was her allergies that were causing her asthma. She mentioned that lifting heavy weights transformed her life.  She concluded, that Captain Marvel changed her as a person. 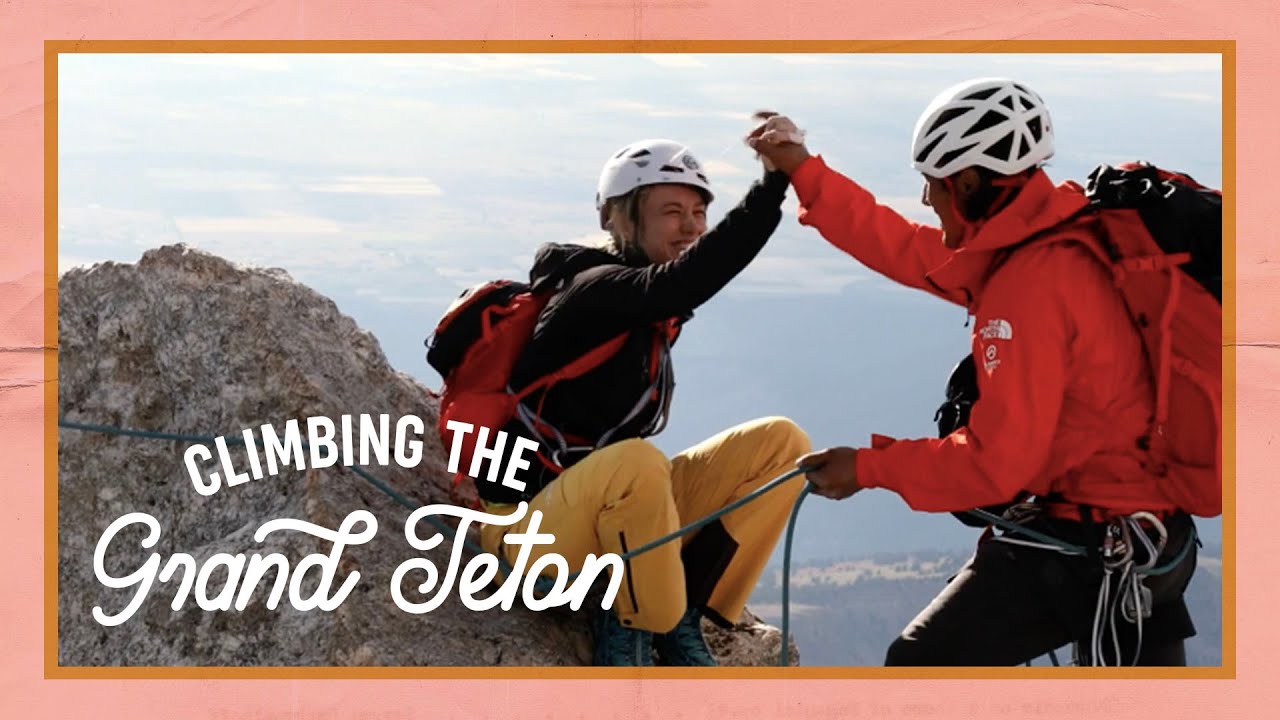 Jimmy Kimmel showed a picture of Brie Larson where she climbed the top of the Grand Tetons in Wyoming. Quick fact! The height of these mountains is approximately 4,119m and it surely is a big deal to climb them, especially for a person with asthma. So kudos to our Captain Marvel for that.

Brie revealed that she was told that only one percent of the people who climb the Grand Tetons get to the top. She revealed that the inspiration behind climbing these mountains was Jimmy Chin, an alpinist who told her to go, and she was like, “fine, sure, I’ll do it.”

She continued, “But my mom was like maybe you’re gonna die and I was like ah, Jimmy’s not gonna kill me, that would like suck for his life and then while I was doing…” Jimmy Kimmel interrupted and said, “It seems like Jimmy doesn’t care much about his life seeing as how he’s chosen this.” But, Brie defended him by saying, “Yea but it’s more like to live with that would be hard I think so I did it.”

Brie Larson revealed that she trained and they were on a pretty regimented schedule. Climbing the Grand Tetons was absolutely remarkable and changed her life. However, she did confess that every step of the way she was like, “I am gonna die.” 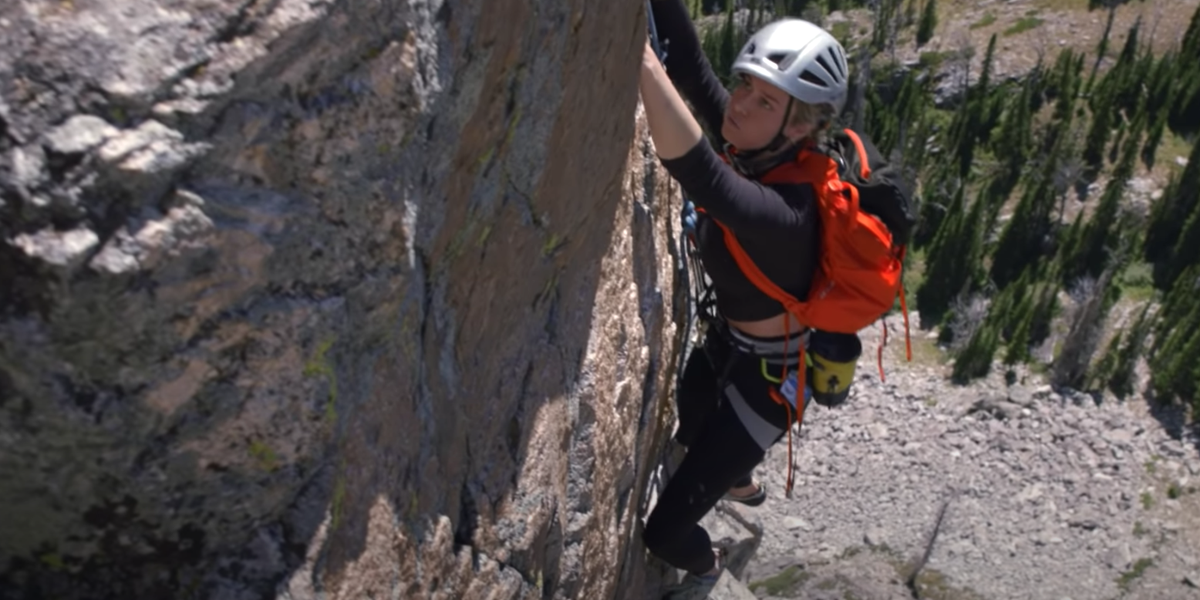 When Jimmy cracked a joke about the photo, she said that she has a whole video on YouTube about how they achieved it and that it actually happened. She revealed that her trainer Jason was also with her in the picture. She spoke about the Grand Teton, “The top is very dangerous because you’re not attached to anything.” 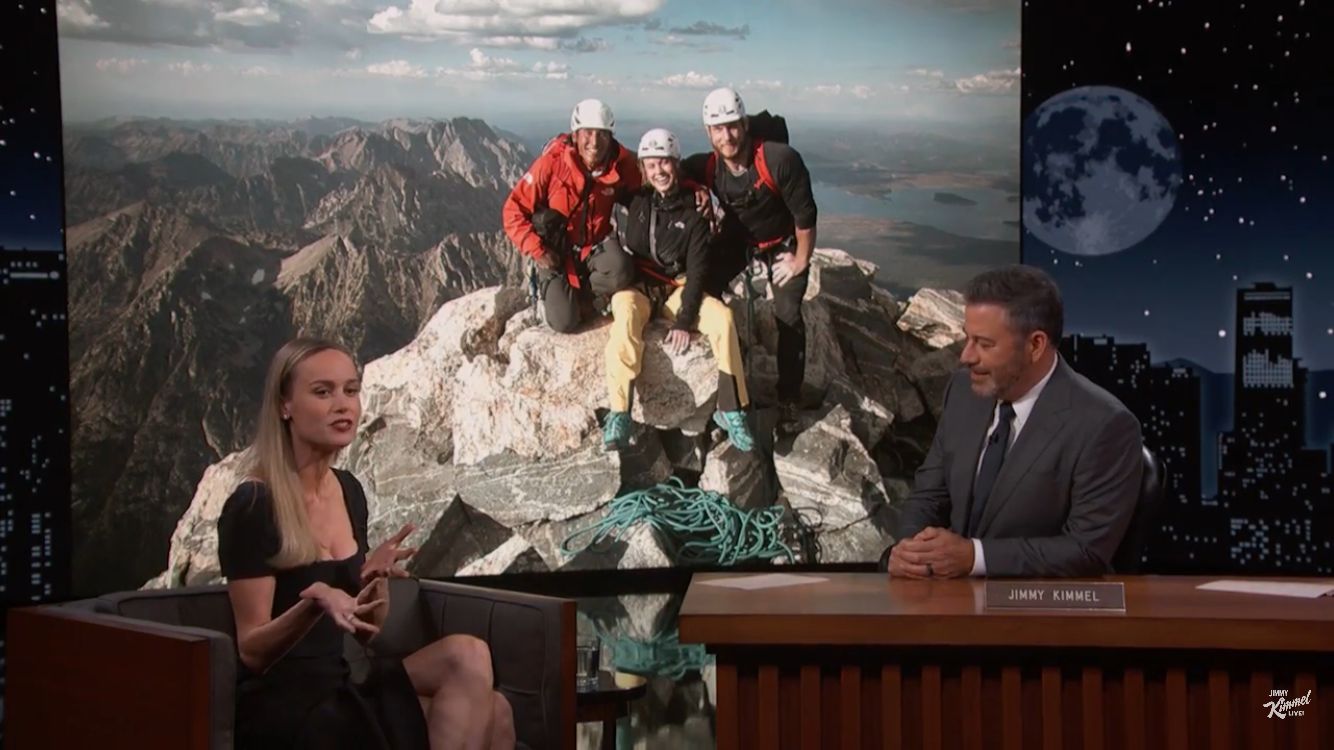 Jimmy joked, “It seems like a clear violation of your contract with Marvel.” She revealed that she wasn’t allowed to do such things but she said no one called her because she survived. She continued narrating her adventure by saying that there was a lot of “sandbagging”. Now if you’re not aware of the term, it means when someone tells you that the thing is super easy, but “it’s super not easy”.

In the end, Brie revealed that when she got to the top, she saw a woman with a perfect ponytail while her clothes were ripped. When she asked her teammates, they told her that there is an easy route which takes only one hour to reach the top. Brie was like, “Why did we climb for three days then.” But it was all worth it for the real-life champ, eh?