Arnold Schwarzenegger’s son Joseph Baena is all geared up to join the cast of Dancing With The Stars in the 31st season of the show. As per the reports of Deadline, Joseph is ready to put on his dancing shoes for the upcoming season of the dance reality show.

The 31st season of Dancing With The Stars will be airing on Disney. Keep scrolling further to learn more details about the forthcoming season of the dance competition. Arnold Schwarzenegger’s 24-year-old son Joseph Baena is all set to join the cast of season 31 of Dancing With The Stars. As per the pictures obtained by TMZ, Joseph has been attending rehearsals and he even posted pictures from rehearsals in the same outfit on the social media platform Instagram.

Just like his starlet dad, Joseph is also an Olympic lifter. According to various reports, at the moment he works as a real estate agent and it seems like he might even try his hand at acting in the near future. What did Joseph have to say about his bond with his dad Arnold Schwarzenegger?

Earlier this year, Joseph opened up and talked to Men’s Health about how he and his dad Arnold found common ground over fitness, and he also went on to say that his famous father Schwarzenegger gave him The Encyclopedia of Modern Bodybuilding (which he coauthored) to help with his training.

Baena told the magazine, “Even though I could call him anytime, I was too proud.” His mom is Mildred, Arnold’s former housekeeper, with whom he had an affair while he was married to his ex-wife Maria Shriver. Joseph further added, “My dad is old school, he doesn’t believe in handouts. He believes hard work pays off, and so do I. I love the word honor, and I’m very prideful in the sense that if I use my dad’s contacts or ask him for favors, I wonder what honor is that gonna bring me?”

Why Joseph doesn’t use his dad Arnold’s last name?

For those of you who are unaware, let us tell you Joseph might follow in his father Arnold Schwarzenegger’s footsteps but he would like to carve a path for himself and this is one of the many reasons why he doesn’t use the “Schwarzenegger” name.

During an interview with E! News, Joseph told Morgan Stewart, the reason behind his last name and said, “There’s a few different variables in that, but that’s just not my main priority at the moment, so I’m just focused on building myself up and building my career in acting and real estate and just focusing on that right now.” 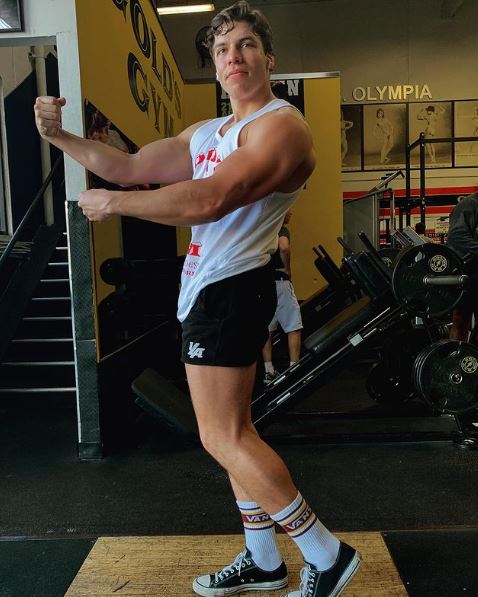 Baena continued, “I mean, my dad is a stallion. He’s a man’s man, I like to think, and I look up to him a lot. So in a way, he’s influenced a lot of things: the path that I have taken with acting, with fitness and my physique and the many other things that I’m doing.”

Are you excited to watch Joseph Baena in Dancing With The Stars? Kindly let us know your thoughts in the comments section below. Don’t forget to stay tuned with us for the latest updates