Whitney Houston was one of the most talented singers in the world. She was well-known for her powerful, soulful vocals and vocal improvisation skills. Back in the day, she was one of the bestselling music artists of all time.

The I Will Always Love You singer rose to prominence as an unparalleled singer. Her most famous hits are as follows: Saving All My Love For You, I Wanna Dance With Somebody, Could I Have This Kiss Forever, Where Do Broken Hearts Go, and Greatest Love of All. Apart from this, Houston was also an actress who knew how to spill magic on the screen. She starred in a couple of films such as The Bodyguard (1992), Waiting to Exhale (1995), The Preacher’s Wife (1996), Cinderella (1997), and Sparkle (2012). There was nothing stopping Whitney Houston until sadly, Whitney stopped herself.

On the other hand, when we talk about the personal life of the Didn’t We Have It All crooner, she was most known for her tumultuous relationship with fellow singer Bobby Brown. The two of them loved in front of the flashing cameras and they even fought publicly.

Both Whitney and Bobby had a great passion for performing on the stage. The former couple also welcomed a daughter together and named her Bobbi Kristina Brown. The former flames had immense love for their daughter and unfortunately, an interest in substance abuse as well. 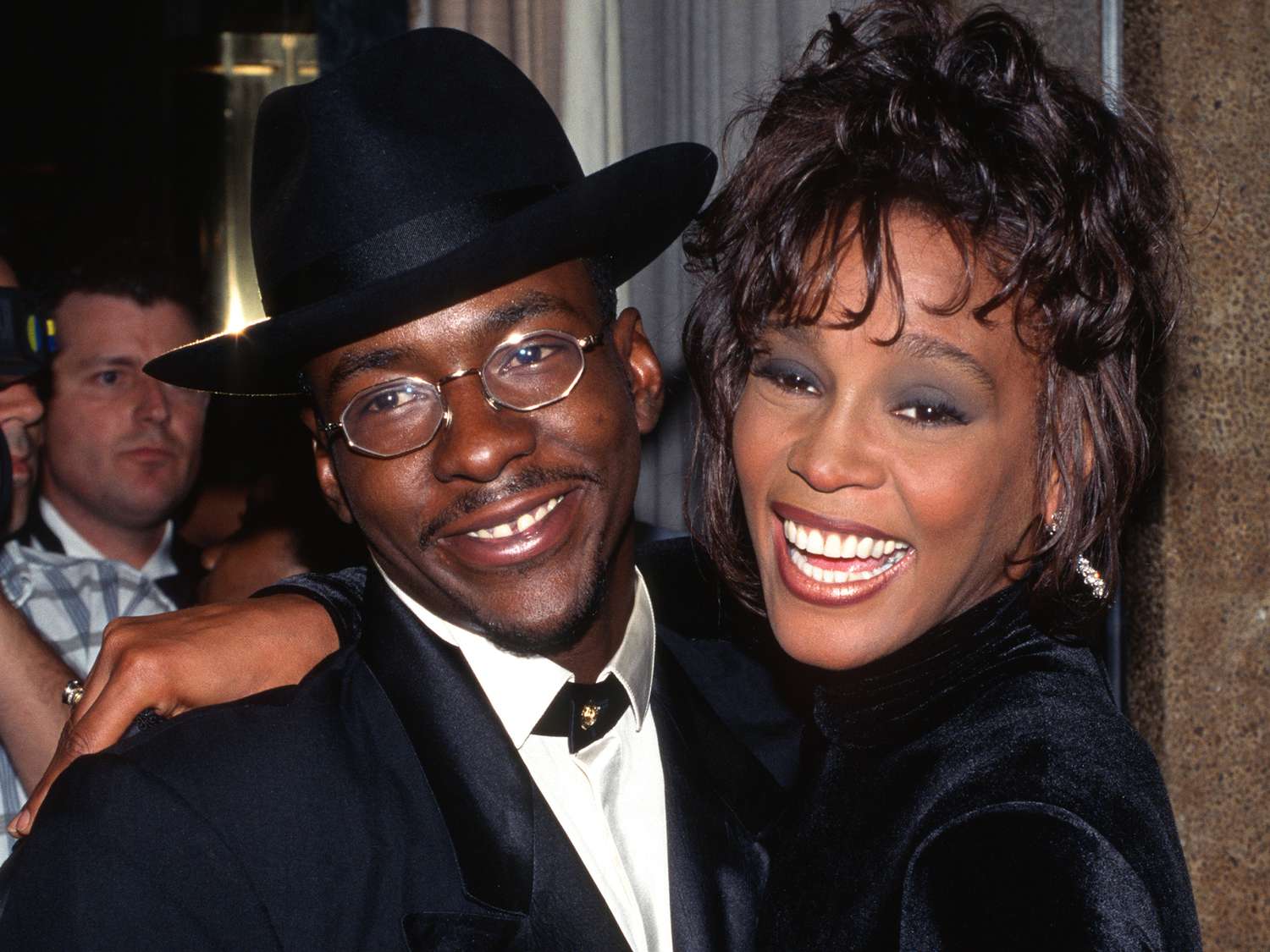 Before sparking romance rumors with Bobby Brown, Whitney was romantically linked to a few interesting men. Read on to dive deep into the personal life of the My Love is Your Love singer.

Houston’s best friend, Robyn Crawford who later on turned into her assistant claimed in her 2019 memoir, A Song for You: My Life With Whitney Houston, that the two were more than friends.

She wrote, “We were lovers. We were everything to each other. We weren’t falling in love. We just were. We had each other. We were one: That’s how it felt. We never talked labels, like lesbian or gay. We just lived our lives, and I hoped it could go on that way forever.” As per a report by Daily Mail, Whitney and Robyn met each other for the first time in the year 1980 when they were both counselors at summer camp. It has been reported that the two of them ended their physical relationship in 1982.

The Grammy-winning record producer Clive Davis spilled the beans on the pair’s romance and the Whitney Houston biopic named I Wanna Dance with Somebody also confirmed the longstanding rumors.

In his latest interview with Extra that aired on Thursday, Davis said, “The movie does set the record straight. They did have a teenage, one-year affair.” For those of you who are unaware, let us tell you, Clive is a producer on the biopic which stars British actress Naomi Ackie as Whitney Houston, and Stanley Tucci as the legendary music executive. The movie I Wanna Dance With Somebody which premiered on December 23 narrates the story of Whitney Houston’s life including the ups and downs of her life, motherhood, her drug addiction, and her tumultuous marriage to singer Bobby Brown.

Clive told the media outlet that the film showcased Whitney’s relationship with Crawford because “there’d been so many articles that have attempted to trace her addiction to being a frustrated lesbian — that she never dated a man before she met Bobby, all of which was totally inaccurate.”

After Whitney’s spilt from Robyn Crawford, the I Look To You singer moved on in her life with Jermaine Jackson, who is also mentioned in her movie. Let us share with all of you, Jermaine Jackson is a former member of The Jackson Five and brother to Michael Jackson.

As per multiple reports, Whitney and the I Want You Back crooner sparked romance rumors in the mid-1980s while Jermaine was still married to his wife Hazel Gordy. However, up until now, Jermaine has never publicly confessed to dating Whitney Houston. While making an appearance on The Talk in March 2012, Jermaine’s sister LaToya confirmed that the two of them were an item at one point. As per Today, she told the panel, “He has admitted that they had an affair.”

If some reports are to be believed, Whitney Houston dated the Coming to America actor Eddie Murphy. They never confessed that they were in a relationship. They maintained we were just friends.

In her 2019 memoir, A Song for You: My Life With Whitney Houston, Robyn Crawford had some things to say. She went on to say that Whitney became infatuated with another superstar: Eddie Murphy. In the book, Crawford has described the scene one night as Houston prepared the dinner table for Murphy, who was scheduled to visit her at her New Jersey mansion. Robyn wrote, “One day when Eddie was supposed to come for dinner, I caught a glimpse of Whitney.”

Crawford went on to say, “She was wearing a black dress and low-heeled slingbacks. For a moment, I thought ‘Boy, I wish she was doing that for me.’” Robyn recalled that Murphy “never showed up that night,” a rejection that left Houston devastated.

Despite everything, Murphy called Whitney on her wedding day to Bobby Brown. On the morning of the July 18, 1992 wedding to Bobby Brown, she got a surprising call from Eddie. Robyn wrote, “[That day] Eddie Murphy called to say she was making a mistake “but she pressed ahead.” During a May 1991 interview with Ebony Magazine, then 26-year-old Whitney Houston opened up and discussed her relationship with Philadelphia Eagles quarterback Randall Cunningham.

At that time, the All The Man That I Need singer referred to Randall as a “tall, fine, good-looking man,” but went into greater detail about his character. She further added, “Randall is a warm, very caring, very giving, and loving young man.” The Grammy winner went on to say, “He’s a great talented athlete. I have a lot of respect for him because it’s very hard to get out there and bang heads and get banged. He’s somebody I can talk to. Randall’s a Christian. He’s a good person.” The pair dated for nearly two years from 1985 to 1987.

Whitney Houston and Bobby Brown had one of the most cantankerous relationships in Hollywood history. The pair crossed paths for the first time in the year 1989 at Soul Train Music Awards. Bobby and Whitney had an instant connection. They had similar backgrounds and the two of them also connected on a musical level. In his 2016 memoir Every Little Step, Bobby talked about Houston’s influence on his life.

In his memoir, Brown wrote, “She taught me how to use my voice, how to blend my notes, how to chop my voice when I needed.” He also revealed that on his part, he taught her to dance.

Bobby continued, “At first, she was uncomfortable with dancing. Admittedly she didn’t have much rhythm. But she had a certain flair. … With the two of us working together, sharing our strengths, I think we made each other better entertainers.” Friends of the pair recalled that the two of them were incredibly close. A family friend told People magazine, “They had this sort of Bonnie and Clyde mentality where it’s them against the world.”

In September 1991, Bobby proposed to Whitney. Two years later, Houston talked about the pair’s proposal and told Rolling Stone, “The first time he asked me to marry him, I said: ‘Forget about it, no way. It’s just not in my plans.’ After a year or so, I fell in love with Bobby. And when he asked to marry me the second time, I said yes.”

The pair tied the knot in front of 800 people at Houston’s five-acre, $11 million New Jersey mansion on July 18, 1992. For the big day, she wore a $40,000 French lace gown by Marc Bouwer. Her dad John Russell Houston walked her down the aisle. In September 1992, Whitney Houston and Bobby Brown confirmed they were expecting a baby. They welcomed their first and only child together the next year. Houston have birth to the pair’s daughter Bobbi Kristina Brown on March 4, 1993.

Before marriage, both Houston and Bobbi had faced drug addiction but things escalated over the years. At one point, Brown got arrested by cops for drunk driving and possession, meanwhile, Whitney went to rehab many times.

In October 2006, Houston filed for divorce from Bobby and their divorce got finalized on April 24, 2007. Whitney bagged the custody of the pair’s daughter Bobbi Kristina. Do you think Eddie Murphy and Whitney Houston were a good match for each other? Kindly let us know your thoughts on the pair in the comments section below. Don’t forget to stay tuned with us for the latest updates from the world of showbiz.