When Elon Musk unveiled the Tesla Cybertruck in November 2019, the world welcomed it with awe and some mixed reactions. However, it has almost been three years but there are no signs available for when we’ll be able to see it jolting down the roads. 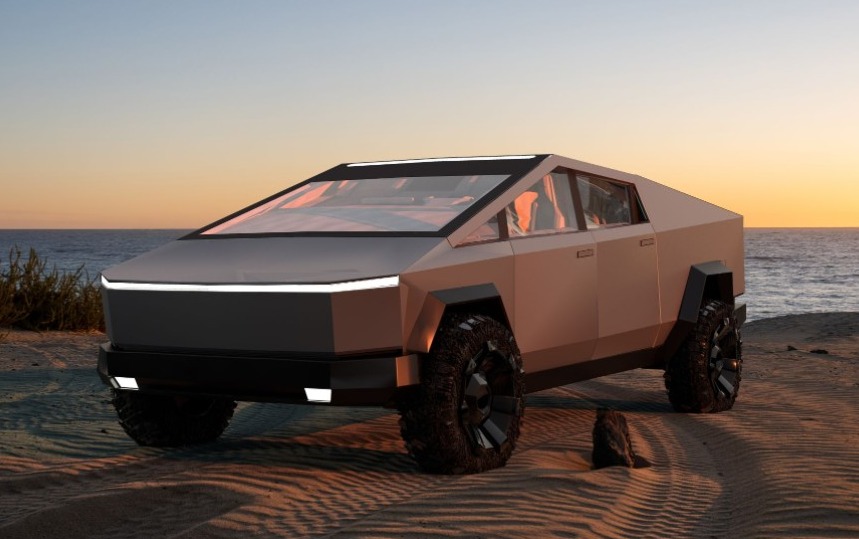 It looks like the upcoming steel-finish EV pickup truck by Tesla is delayed yet again as announced by the company on April 7, 2022. Although the CEO Musk has promised it will come in 2023. The Cybertruck is still up for pre-orders on the official website.

In the latest piece of development, Tesla has limited the pre-orders for their upcoming Cybertruck only to North America. The pre-orders have reportedly crossed the 1 million mark already worldwide, and the company must have kept this in consideration while making the latest decision.

The good thing is that the Electronic Pickup Truck with wild looks and premium specs is still coming soon. Here’s everything that you need to know about the Tesla Cybertruck including its release date, specs, design, features, price, editions, and more.

Tesla Cybertruck Release Date: When is it coming out?

“It’ll hopefully arrive next year,” he said. This means that the production of the Cybertruck won’t start until the next year arrives if Tesla is planning to launch it later next year. The EV giant is still working on the R&D (Research & Development) part of the vehicle.

The Tesla Cybertruck pre-order web page states, “You will be able to complete your configuration as production nears.” Initially, the text also included “2022” but now the company has removed it.

Thus, there is no confirmed release date available for the Tesla Cybertruck yet. We only know that it will be available sometime in 2023 if it isn’t delayed yet again. Even if it does, we’ll be the first to tell you, obviously after Musk himself.

As you can see from the official Tesla Cybertruck pre-order website, “You will be able to complete your configuration as production nears”. At first, this mentioned 2022, now it doesn’t have a date listed at all. Your guess is as good as ours.

Why is the Tesla Cybertruck Delayed?

Tesla previously planned for the Cybertruck to go into production in late 2022 at Gigafactory Texas. They had to postpone their plans and delay production until next year due to the global supply chain constraints.

My fears were true! Cybertruck „delayed“ due to regulatory hurdles outside the US and order backlog. So no Cybertruck for the world besides US. It has been pushed back to 2024 😱 pic.twitter.com/tnnF0qzYsn

In January this year, Tesla confirmed the delay in the production citing supply chain issues, especially the chip shortage for that. They also informed the global COVID-19 pandemic restrictions have also played a significant role in the delays.

The Tesla Cybertruck features a strikingly new design and an outer shell that looks like it is directly coming from another planet. This futuristic design gained a lot of attention when Tesla unveiled it due to the polarizing and controversial concept. Some called it futuristic while others called it plain ugly.

The Cybertruck has a thick and unfinished stainless steel body. It looks cool but there could be certain problems related to its sturdy nature. It would be pretty difficult to repair and impossible to paint as it is very tough and resistant to corrosion. The body may also hold fingerprint impressions due to its stainless steel finish. 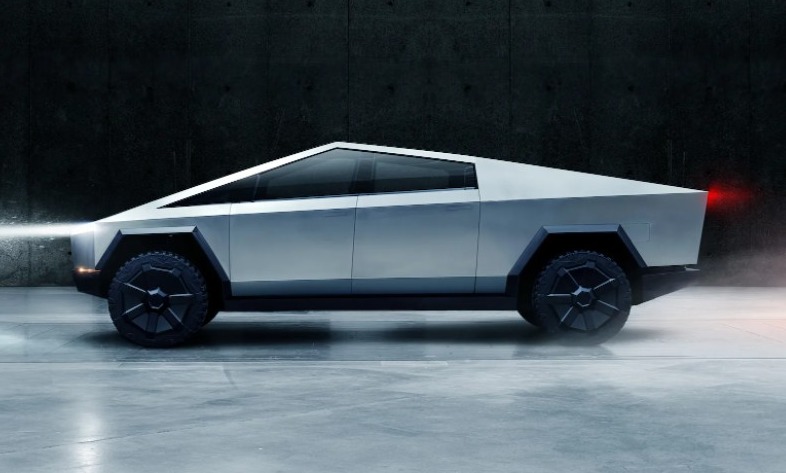 The Tesla Cybertruck is 231.7 inches long, 79.8 inches wide, and 75 inches tall. In addition, it has a 35-degree approach angle, a 28-degree departure angle, and up to 16 inches of ground clearance making it a suitable fit for off-road performance too.

The Cybertruck features a bed and it is very effective for carrying stuff. It comes with a sliding, metal tonneau cover that is lockable. This makes it secure and safe to keep your stuff. There’s also a built-in ram and multiple charging outlets. The insides of the vehicle are very minimalistic, even more than the Tesla Model 3.

The Tesla Cybertruck is slated to feature powerful specs and premium features. It will be not only available with only one or two electric motors, but also with three of them in a single body.

The single-motor Cybertruck has rear-wheel drive, and the company teased it a bit once. Whereas, the two- and three-motor variants have all-wheel drive. All the variants have an adjustable air suspension that will be raised or lowered on the fly to provide up to 16 inches of ground clearance.

Tesla didn’t reveal the size of the batteries they will equip the upcoming pickup vehicles with. However, each of the models will have a 250-kW charging cable. They’ll be able to access the company’s vast network of Superchargers, obviously.

CEO Elon Musk has also claimed that the Cybertruck will feature built-in solar charging. This will be able to add around 15 to 40 miles of additional range depending on the external conditions.

The spartan interior of the Cybertruck will feature a big 17-inch touchscreen horizontally mounted in the center of the dashboard for infotainment. All the models will also have the Autopilot feature. Tesla also claims that it will offer a Full Self-Driving option for $7,000.

What is the Towing and Payload Capacity?

The Tesla Cybertruck will be able to seat up to six people and its 6.4-foot cargo bed provides around 100 cubic feet of volume. There’s also a nifty slide-out tailgate that would work as a ramp to load four-wheelers and motorcycles.

According to Tesla’s claims, the Cybertruck has a payload capacity of 3,500 pounds. If it is real, this makes it better than Ford’s F-150. However, it will still be classified as a light-duty pickup truck.

What about the Range, Speed, and Performance of the Tesla Cybertruck?

The Cybertruck by Tesla serves the purpose of both, a pickup truck that has become essential in the United States over the year and a sports car. According to Tesla, the Cybertruck can go from zero to 60 mph in only 6.5 seconds and top out at 110 mph.

The dual-motor Cybertruck will reach 60 mph in just 4.5 seconds while the triple-motor variant will achieve the milestone in only 2.9 seconds. The top speed of these variants is 120 mph and 130 mph respectively. 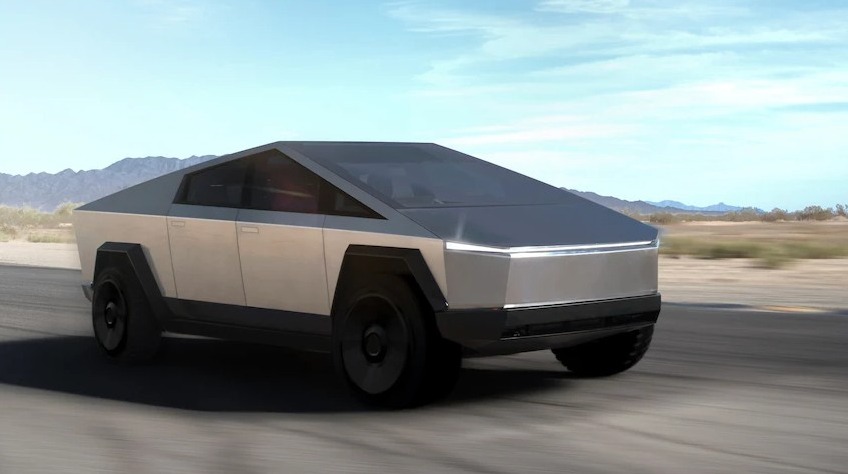 By now, you’d have already figured out that the Tesla Cybertruck will be available in three editions or variants. The different configurations are based on the number of electric motors each edition has. The three editions are:

One key differentiating factor among the three models is that the single-motor truck features rear-wheel steering while the other two have an all-wheel-drive mechanism. The three models also have different speeds, acceleration, capacity, and range on a single charge.

There are also rumors on the web that Tesla may also announce a four-motor model for the Cybertruck having a 4-wheel steering, crab walk, and top-tier performance. However, not much is known about it yet.

Tesla Cybertruck Pre-Order Details: How to Buy it?

Tesla’s Cybertruck is available for pre-order on the official website. You’ll have to pre-register your booking to get the Cybertruck once it is available next year. However, over 1.2 million people will already be ahead of you as they have already pre-ordered the vehicle. 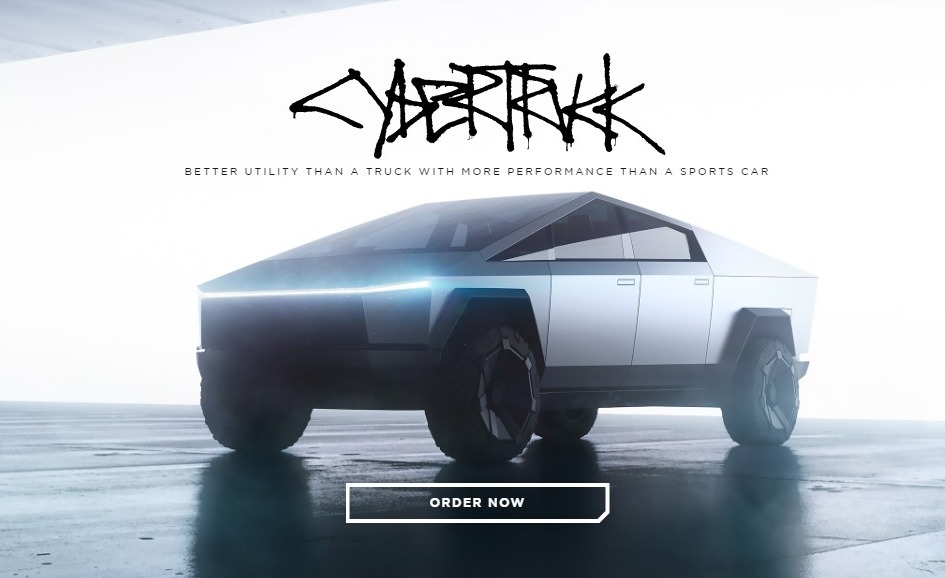 After that, you’ll have to make a $100 deposit which is fully refundable to confirm your booking of the futuristic pickup vehicle by the EV giant. Are you looking forward to buying it?

What are your thoughts, opinions, and expectations from the Cybertruck? Sound off in the comments below.

Saquib Hashmi
A simple Netizen on a hunt for stories worth sharing. Presenting them here in a spicy form. I hope they offer you value and knowledge.
RELATED ARTICLES
Automobiles