We are just a few days away from the launch of the Samsung Galaxy M52 5G. And before the release, its design and features have been leaked online.

The leaks regarding the design of the Samsung Galaxy M52 5G have come from a trustable source – MySmartPrice. As it can be seen in the leaked render, the smartphone will be almost similar to Galaxy F62, in terms of rear finishing. It means the next major release in the Galaxy M series will feature a pinstripe-style back panel. Further, it is expected that the smartphone will come along with a 120 Hz refresh rate.

Are you finding these features exciting? Yes, then let’s check out all the available information regarding the upcoming Samsung Galaxy M52 5G.

Most of the features of the Samsung Galaxy M52 surfaced online last month. And now its design and different color options have been leaked by trustable tipster Ishan Agarwal. As per the leaked render, the smartphone has a centrally placed selfie camera and features a 120 Hz AMOLED display. To be specific, the smartphone has a 6.7-inch full HD+ super AMOLED display that offers 1080 x 2400 pixels resolution. To protect the smartphone from unintentional falls, it has been given a protecting layer of Corning Gorilla Glass 5. 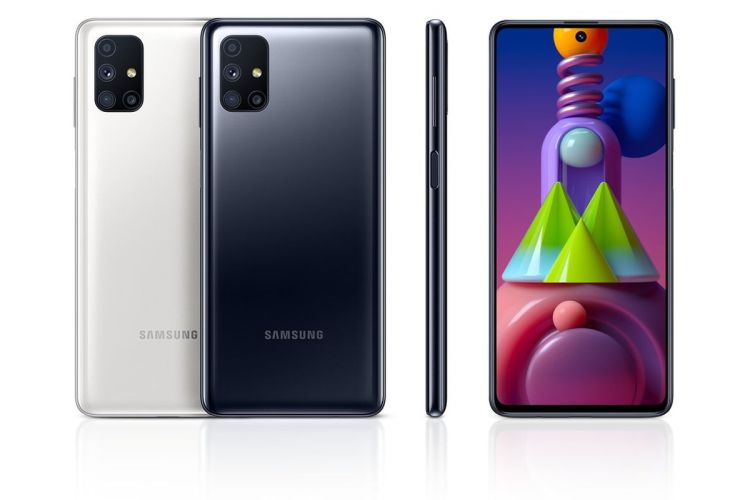 At back, the smartphone has been given a pinstripe design, very much similar to Galaxy F62. For keeping the smartphone safe from unauthorized access, it features of fingerprint scanner that is embedded in the power button.

The SIM tray is placed on the right side of the smartphone. Although, there isn’t any information on whether the smartphone will feature a dedicated microSD slot or not.

In terms of camera, the Samsung Galaxy M52 will come along with a triple rear camera setup at the back from which one is 64 Megapixel primary shooter, a 12 Megapixel sensor for taking wide-angle shots, and a 5-megapixel macro camera. For taking beautiful selfies and attending Zoom video calls, the smartphone will offer 32 Megapixel selfie camera.

Coming to the backbone of any smartphone, the upcoming release in M Series is expected to feature a Snapdragon 778G chipset. And in terms of storage, it will have two options – 6GB/128 GB and 8GB/128GB.

Lastly, if we talk about the OS, the smartphone will run on One UI 3.1 and will have the latest Android 11. And in terms of connectivity, it is expected to have dual-band Wi-Fi, 5G support, and Bluetooth 5.0.

The pricing and release date are the only two aspects on which we don’t have any official confirmation. However, it is been expected that the smartphone could launch anytime in the month of September.

In terms of pricing too, there isn’t any official confirmation. But the speculations are high that it will launch under the price of $290.

Nevertheless, we will update this page as soon as any official confirmation comes out regarding Samsung Galaxy M52. Till then, keep visiting TheTealMango for the latest tech news.