WrestleMania 38 Tickets Price and Steps to Buy them Online

WrestleMania is just around the corner, and wrestling fans are hyped for the Mania season. This year’s event will be a usual two-night event taking place in April, find out how and where to buy WrestleMania 38 tickets or packages, and how much do they cost, here. 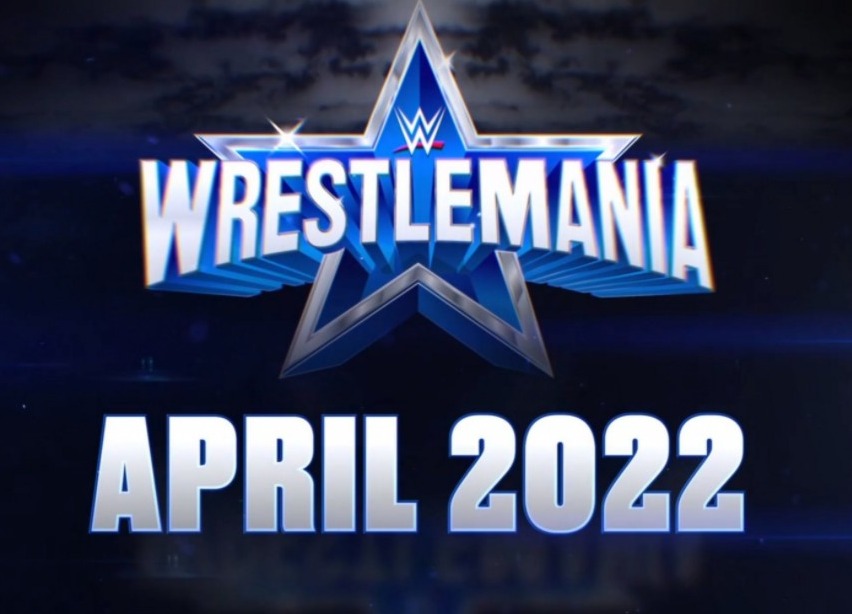 Now that the event is nearing its date, there won’t be any such offers, and the prices are likely to go up as well. If you are willing to attend WrestleMania in person in Arlington, you should get your tickets or packages right away.

WrestleMania 38 Tickets: Where to Buy them?

Tickets for WrestleMania 2022 taking place in Arlington this April are available right now. Fans can buy their WrestleMania tickets from SeatGeak.com, which is WWE’s official ticketing partner for this season.

WrestleMania 38 will be a two-day event. So, fans can buy tickets for separate days i.e. Night 1 or Night 2, or they can buy Two-day combo tickets if they wish to attend the complete event. 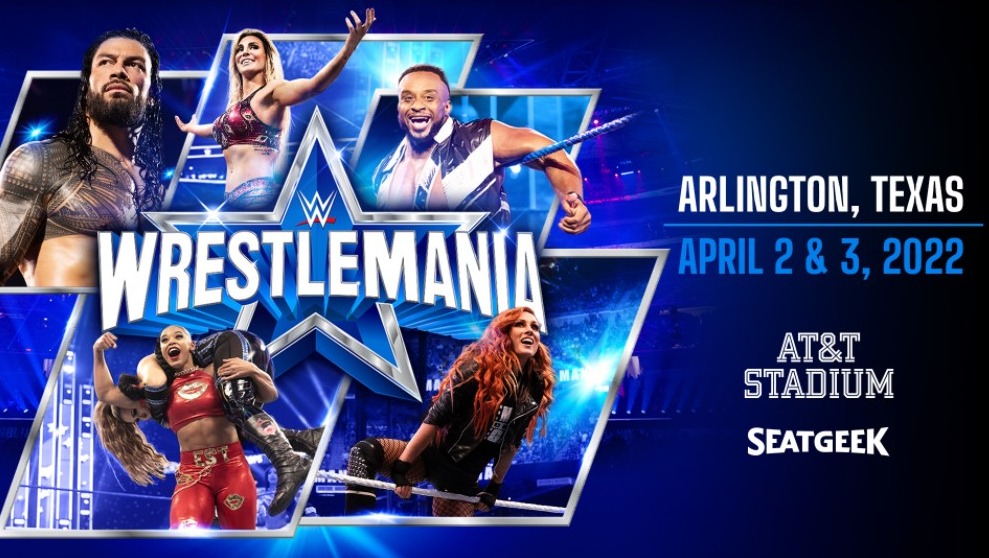 WrestleMania 38 Tickets are also available at third-party vendors including VividSeats and TicketSmarter. You can also purchase them from resellers, but be cautious as many of them can turn out to be fraudulent.

If you’ll be visiting Texas to attend WrestleMania live, then you can purchase WrestleMania Travel Packages from Wrestlemaniatravel.com. The package includes tickets to the main event, WrestleMania Week events, and exclusive WWE Superstar meet-and-greet experiences.

How much do WrestleMania 38 Tickets cost?

The price of WrestleMania tickets depends on the location of the seat. The seats at the ringside are the costliest, whereas, the tickets at the upper tiers are on the economical side.

Fans are ready to shell out a whopping amount of over $20,000 for a seat at the ringside just to witness their favorite WWE Superstars up and close.

How to Buy WrestleMania 38 Tickets?

We’d recommend using SeatGeek.com to buy your WrestleMania 38 tickets as it is the official seller for this year’s edition. For context, here is the complete procedure to buy WrestleMania tickets in 2022:

That’s it. This is how you can buy tickets to attend WrestleMania 38 in Texas.

How to Buy WrestleMania 38 Two-Day Package?

WrestleMania 38 will be a two-day festivity packing tons of action, wrestling, and entertainment. The Superstars will start arriving in the city from the start of the week, and events will start from Friday. 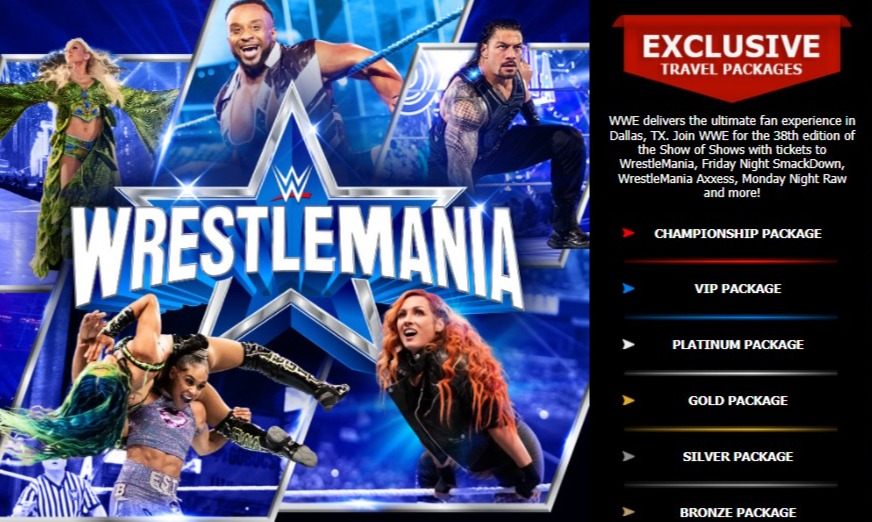 You can head over to this website, and find the following WrestleMania Travel Packages:

All the packages include a stay at the Dallas Downtown Area Hotel. The location of your seat at the arena depends on the package you buy. The higher-priced packages will be able to witness more action and unlock certain perks including WrestleMania Axxess tickets, a Collectible Chair, etc.

You can compare the packages, choose the right one for you and your partners, and buy it to experience the best WrestleMania experience.

WrestleMania is the grandest annual professional wrestling live event by WWE featuring superstars/wrestlers from the Raw, SmackDown, and NXT brand divisions. The WrestleMania 2022 will be the 38th edition in history.

WrestleMania 38 will be a two-night event taking place live on Saturday, April 2, 2022, and Sunday, April 3, 2022. It will be held at the AT&T Stadium in the Dallas-Fort Worth metroplex city of Arlington, Texas. 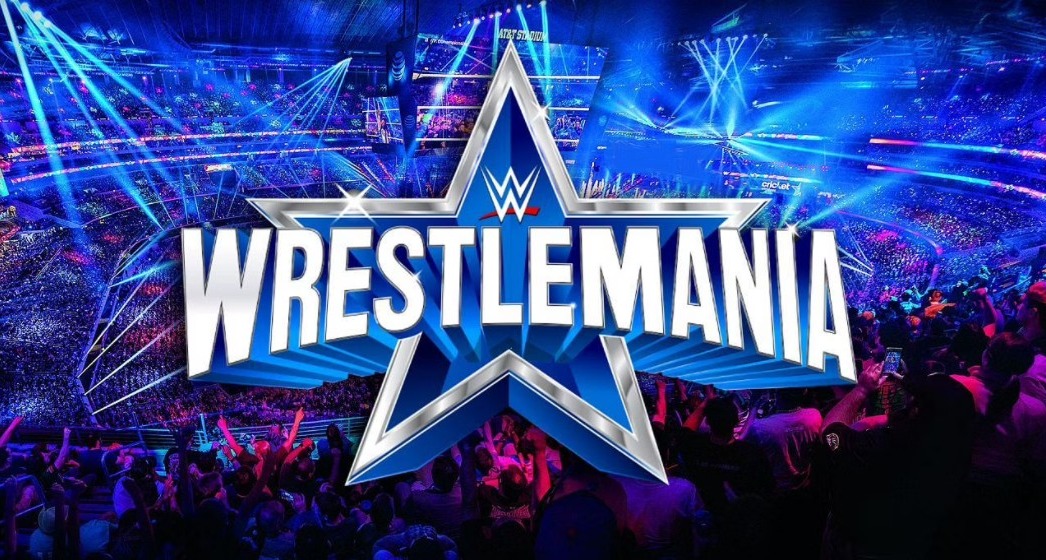 Each night will feature five hours of action with the kick-off time at 6:30 PM ET for the two and a half-hour pre-show, while the main card will kick off at 8:00 PM ET. The event will air on PPV worldwide with the live stream available via Peacock in the US and the WWE Network everywhere else.

The WWE Champion Brock Lesnar and Universal Champion Roman Reigns will headline WrestleMania 38 in a title unification match. WWE is advertising it as the “Biggest WrestleMania Match of All Time.”

Along with that, many iconic superstars and all-time greats will be wrestling in the two-night event in Texas. Here are all the currently official matches for WrestleMania 38:

Rumored Matches that are not official yet:

The WrestleMania 38 card is subject to change at this moment. We will let you know once everything is confirmed.