NBA All-Star Voting: How to Vote for 2022 Game Starters?

It’s was a Christmas treat from the NBA as some of the best players in the league went head to head on the Christmas Day special. Boston Celtics and Bucks were locked in an intense battle with the Bucks coming through in the clutch.

On the other hand, Steph and the Warriors went against CP3 and Booker. The Warriors were shorthanded but Chef Curry was able to cook through a victory. Although the biggest surprise would probably be James Harden.

James Harden had a very slow start to the season but he just exploded against the Lakers and had a triple-double with 36 points 10 rebounds and 10 assists. Christmas games are very important for teams to keep and build momentum.

With the voting lines open for the All-Star games the players will now focus on improving their performances and getting on a winning streak. The All-Star games will mostly be held in Feb which leaves only around a month for fans to vote for their favorite players.

The voting started on Christmas Day, Dec. 25, at 11 a.m. ET and concludes on Jan. 22 at midnight ET, giving fans the opportunity to vote for the 2022 NBA All-Star Game starters via the NBA App, NBA.com, and Twitter.

The voting has already begun and it’s time for fans to express their love for their favorite stars in the NBA. Today we’ll provide you with a step-by-step guide on how to vote for the NBA All-Star games through the NBA App or the website.

How to Vote for 2022 NBA All-Star Game Starters?

For voting in the NBA, you will have to login into your NBA account from your mobile or your laptop. If you’re a mobile user in the bottom right corner click on the More (the three dots).
From there you can go to the All-Star Voting area. For Laptop users, after logging in NBA App we have to select the All-Star category from the available popups.

Once you click on this the All-Star window will open. This is a collection of all information and historic moments from previous editions of the All-Star games and you can view it all.

There is also the All-Star News tab which has all updates about the All-Star Games. Although for voting we will have to go to the Vote Now tab. From this point onwards the East vs West selection window will open which will look something like this.

From this point onwards you have to select your team for the Eastern and Western Conferences. So there are 2 guards and 3 forward positions. When you click on the + button say in the Eastern conference, this window will open. 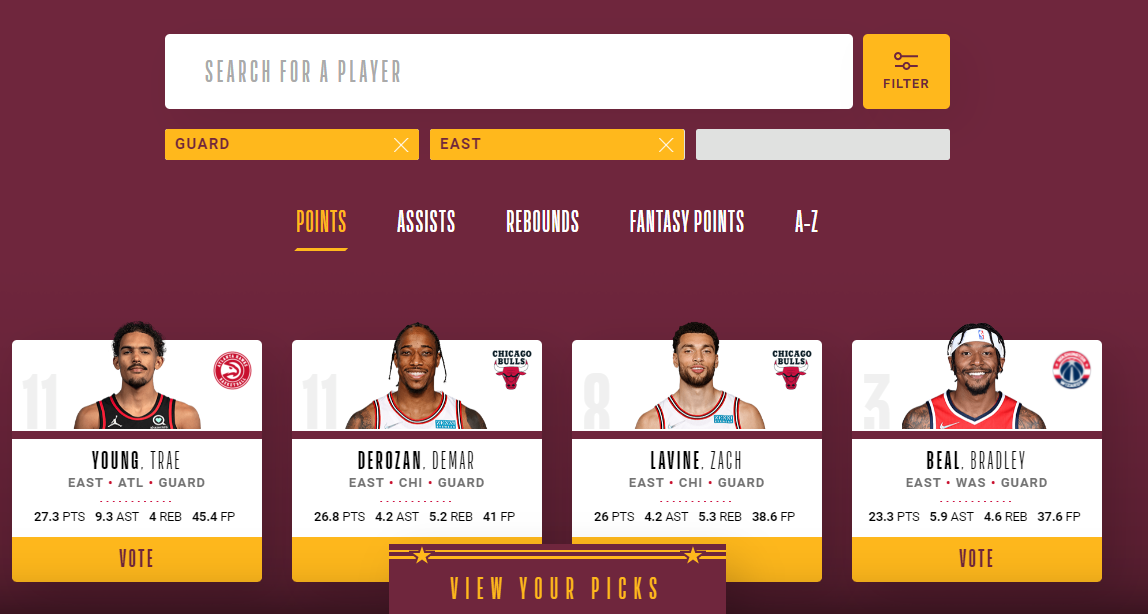 Here you can select two positions at the Guard position. Say we select Trae and Zach for example. To do the selection for the Front Court ->Click on the GUARD button and change it to Front Court.

That will then show you the Forwards and Centres in the East. After you’re done selecting you’re forwards in the East then we have to switch to the Western Conference ->Click on the East button and change it to West. 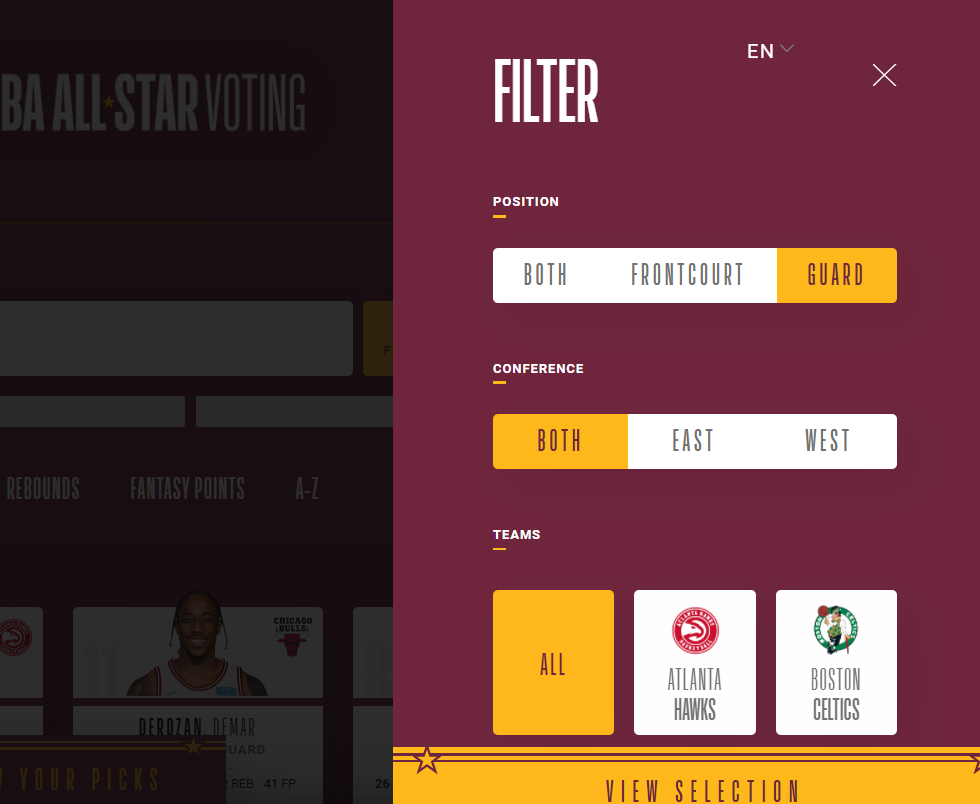 This is the toggle screen for switching and from here you can complete the team selections for both the Eastern and Western conferences. Once your team is complete it will look something like this, with your own selections obviously. 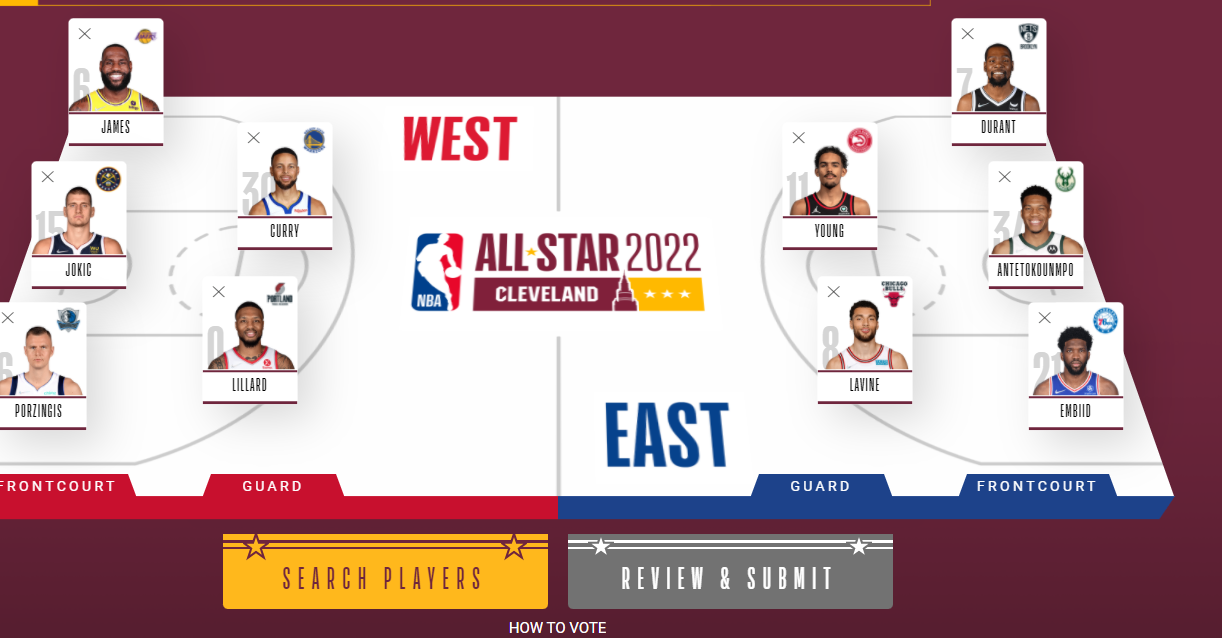 From this window, we can make changes or confirm our final selection. Post this point all we have to do is enter our name, Email ID and clear a robot verification check. Once you fill in all the details your vote has been submitted.

All-Star votes are done on a repetitive basis and you can vote for your favorite stars once every day. Then the total of all the votes is taken and on that basis, the All-Star Captains are decided.

Tweet, retweet or reply with a hashtag of an NBA player’s first and last name (#FirstNameLastName) or Twitter handle, along with the hashtag #NBAAllStar. Each tweet may include only one player’s name or handle. Fans may vote for up to 10 unique players per day from Dec. 25 – Jan. 22.

There will be 5 days when the fans will be able to vote twice. Here are the dates

All-Star Captains are the two players from both Conferences who have the most votes. Post that the Captains select their team and that is streamed live on TNT. There are other platforms to watch this but that is a discussion for another day.

Last year Lebron James and Kevin Durant were named as captains. Team Lebron emerged as the winner with Giannis Antetokounmpo as the All-Star MVP. This might finally be the year where Lebron James is not the Captain in an All-Star Game.

When will be the Starters announced?

The NBA All-Star Game starters will be revealed, including the two team captains, on Thursday, Jan. 27 during TNT NBA Tip-Off.

TNT will also announce the reserves, as selected by NBA head coaches, on Thursday, Feb. 3 during TNT NBA Tip-Off.

Our take on the Captains

Steph Curry definitely is one of the players who can be voted as a Captain. He is coming off a sensational season and has become the best shooter the game has ever seen. He is in the top 5 of the MVP leaderboard too.

This could be one of those seasons where the Warriors will look to go all the way to the title. The only key thing to see is how will the team adapt to Klay Thompson’s return.

If you look in the East Giannis and KD are the two names who are in top contention. KD has been sensational and is almost carrying the team on his own. On the other hand, Giannis is continuously adding to this skill set with new shots and extended range.

It will be a close call but given Giannis’s popularity, he just might knick it. NBA fans will be full of excitement for the All-Star weekend. It’s not just the All-star game but also the 3-point contest, the dunk contest, the skills challenge.

It’s like we get to see the festivities of the NBA in a week. We’re excited and will vote for our favorite stars. Who will you be voting for?