Jake Paul Vs. Vladimir Putin, the Boxing Match for Fools

The Paul brothers are back at it again, and this time Jake Paul is trying to start beef with Vladimir Putin of all people, making it seem like there could be a Jake Paul vs Vladimir Putin and all of us are clearly not cracking up.

Big news. Tickets on sale next week. #PaulPutin brought to you by @TimJDillon promotions. pic.twitter.com/O45FjVRxd8

In the light of this hideous comment and mockery, let’s get to know the two of these a little bit better in the context of fighting.

We already know that Putin is a big fan of taekwondo and judo but we haven’t seen him in a boxing ring with anyone. Putin may have co-written a book about judo but we’re not sure that he’d be able to KO Jake Paul.

And it also should be noted that Putin has been stripped of his black belt. Both the International Judo Federation and European Judo Federation announced they were suspending Putin from his roles as honorary president and ambassador.

After his success in the first fight against fellow YouTuber Deji Olatunji, Jake Paul went on to rack up wins under his portfolio. Today, Jake Paul has been the face of the influencer boxing world and racked up 5-0 as a professional boxer and is already looking for his next opponent in 2022. The YouTuber seems to have finally found his next boxing opponent. Taking to his Twitter, Jake Paul announced a ‘controversial’ mock fight and guess what? The fight is against none other than the President of Russia, Vladimir Putin. 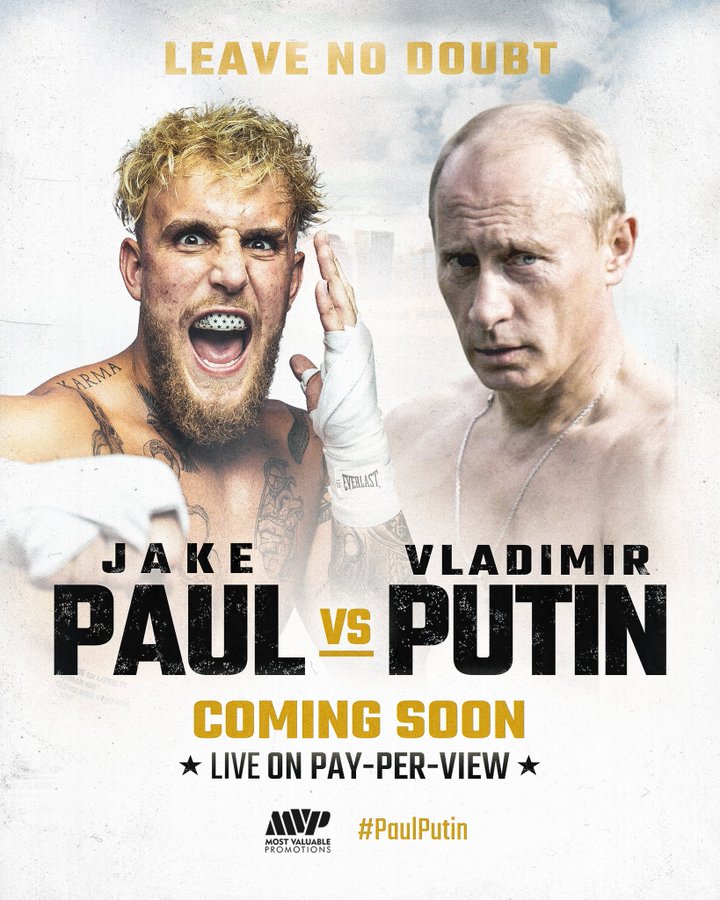 However, just a few days after his solidarity tweet, the YouTuber has come out with a way to make fun of the whole situation. The latest post on his Twitter is captioned: “Big news. Tickets are on sale next week. #PaulPutin brought to you by TimJDillion promotions. And his own brother, Logan Paul made another tweet, captioned: “he needs to be Putin his place”, while the comedian who started this idea in the Internet’s head commented: “Excited to present this”

he needs to be putin his place

Excited to present this. https://t.co/FTx1MZlElU

Paul, 25, immediately received backlash as his tweet was deemed “insensitive” and “inappropriate” following the recent invasion of Ukraine by Russia’s military forces.

Fans criticised the star due to the timing of the tweet, as he shared this during a highly sensitive time during a war.

One fan wrote: “This tweet is not it bro” while another added: “In the middle of a war killing thousands and retreating millions let’s just all make jokes about Paul vs Putin posts”.

Am I the only one that doesn’t find shit like this funny, like… at all? Seems like a weird and insensitive attempt to gain attention. https://t.co/47bLdQmQ4F

A third Twitter user wrote: “this tweet truly shows the extent of your privilege during the situation, Jake.” while another added: “Jake Paul using Ukrainian invasion as an attention grab”.

“Worst f**king time for this joke” one user wrote, while another added: “It’s no laughing matter!! Stop seeking attention and grow up!!”.

Check out more about the Jake Paul vs Vladimir Putin and more of celebrity insanity at The Teal Mango.