Lakshya is a young Indian prodigy pushing to enter the Big Boys club in the badminton world. Coming from a badminton family Sen has been preparing for this for a long time. Lakshya’s father Mr. DK Sen is a coach for India and his brother is an international badminton player.

It seems as if badminton runs in his family’s blood. Lakshya has been working his way through the rankings slowly but steadily. He has been able to make a name for himself and is currently ranked 24 in the world. Under the leadership of the great Prakash Padukone, the youngster has started making headlines for India.

Lakshya came on Padukone’s radar when he was just 9 years old. By the age of just 15, he had won the National junior under 19 title. He then went on to win the gold medal at the 2018 Asian junior event, defeating the then-junior World champion Vitidsaran of Thailand.

It seems the stage has been set for the youngster for a long time. In this year itself, he has played in 9 tournaments so far. Lakshya had a humbling experience in the previous year against Olympic champion Viktor Axelsen.

He then went on to train with Viktor for 2 weeks as he attended his Dubai training base. Lakshya described it as an eye-opening experience. Now he knew what it truly meant to be a professional. 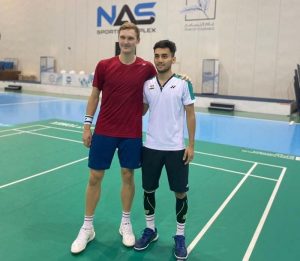 He was very impressed with Viktor’s routine and picked up quite a lot of things from his time with the champ. However, he faced yet another loss to Viktor earlier this year. But the journey is still a long one for Lakshya and now his focus will completely be on BWF World Tour Finals.

Lakshya had been rather unfortunate as he was drawn into the group of death with Viktor Axelsen, Kento Momota, and Rasmus Gemke. Lakshya was set to face Kento Momota who is currently ranked at number 2nd in the world.

However, the heavy burden of a tiresome schedule by the BWF is starting to show on the players. Both Rasmus Genke and Kento Momota had to retire from the tournament citing previously sustained injuries.

Viktor Axelsen said that the way things are being handled is absolutely “absurd”. This should be the best eight players in the world competing at the highest level. The schedule is slowly running everyone down. I feel sorry for all the players who are injured.”

This was his statement in response to the events that unfolded. However, this will be a big opportunity for Lakshya. If he can win the semi’s this can be his very first Final appearance.

After playing Viktor in 2020 Lakshya described that he was overwhelmed with how good Viktor played. But now he has been participating in several high-level tournaments and had adapted to the pressure.

The most important step for him will be to change his mindset. Now the goal is not to enter these tournaments but to secure a title to his name. He has already pulled some upsets against the top 20 ranked players and there might be one more upset to his name come semis.