YouTube Star Jenna Marbles’ Home Broken Into By A Stalker

A stalker has been harassing Jenna Marbles and her husband for months, threatening to break into her home and cause damage.

Julien Solomita, the former YouTuber’s husband, took to social media to explain what had occurred to his wife. He added that they are safe now, including their two dogs, and were not injured.

As the new year begins for YouTube star Jenna Marbles and her new husband, it has been one of the scariest starts of their lives. As the story goes, Julien Solomita and Jenna Marbles encountered a stalker that terrified them.

According to Julien, on Monday, January 2, he took to social media to inform fans that their home was broken into, but they and their pets were safe, as a stranger had entered their home. This is what he explained and why he wanted to inform everyone about what happened. 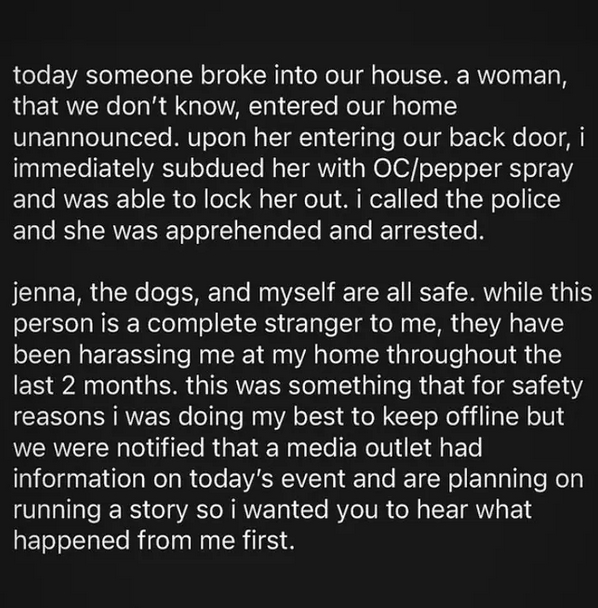 “Today someone broke into our house,” Julien told his followers on his Instagram story in a note he posted. “A woman that we don’t know entered our home unannounced. Upon her entering our back door, I immediately subdued her with OC/pepper spray and was able to lock her out. Then, I called the police, and she was apprehended and arrested.”

The Stalker Was Sprayed Twice With Pepper Spray By Julien

According to law enforcement sources, the newlywed’s home in San Fernando Valley was called into police custody after a female fan showed up looking for Jenna’s husband, Julien Solomita, and things got heated.

In response to the woman’s uninvited visits to the house Monday, Julien pepper-sprayed her twice when she showed up uninvited. Sources say the LAPD came across the woman as they made their way to the home, and when they discovered that she had been pepper sprayed, they called an ambulance to transport her. In addition, a local hospital was contacted to see if she needed further treatment.

Jenna was upstairs during the incident, according to sources familiar with the situation, and she and her husband, who just got married a month ago, are safe and sound, and they have no idea who this woman is. So there may not be much to worry about when it comes to pepper spray for the woman. However, she is expected to be taken to jail and charged with felony stalking once she is released from the hospital.

A Few Days Before 2022 Ended, The Couple Announced Their Wedding

Julien Solomita and Jenna Marbles have officially announced that they are married now. Having been dating since 2013, the 36-year-old YouTuber has a 30-year-old content creator partner who is also a YouTuber. Julien has provided some insight into their relationship over the years, even though Jenna quit social media platforms in 2020 and has been largely silent since then. Still, he has provided some insight into their lives together. 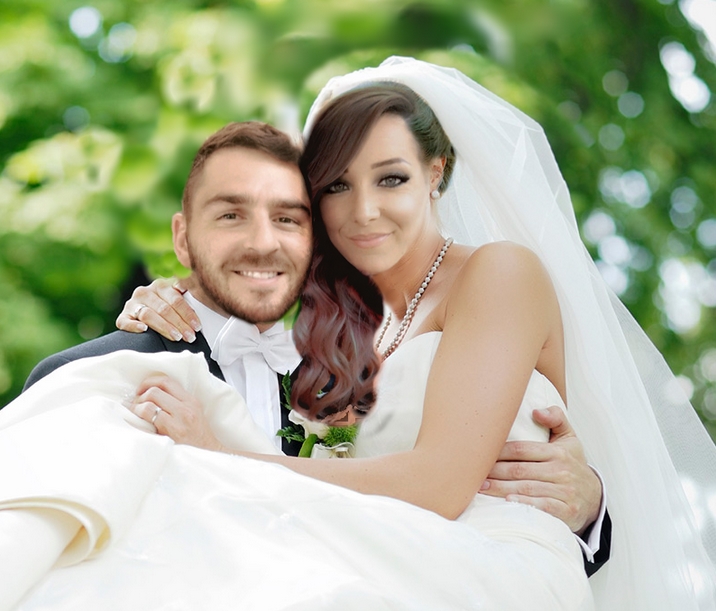 As soon as he announced their engagement in 2021, he followed up with the news that they were getting married on December 22, 2022. On the exciting news of their upcoming wedding, Julien posted a post on Instagram accompanied by some photos taken by professionals from their wedding.

There was something beautiful about Jenna’s dress: its lace sleeves and deep V-neckline. A long veil and sunglasses completed her look, as well as sunglasses. It was a three-piece suit that the groom wore, along with a veil that his wife had worn at the wedding. The back of their car is also painted with the words “Just Married” written by him.

A later photo shows one of Jenna’s most well-known and beloved dogs, Kermit, who you can see lying on top of the bride’s dress in another shot. Marbles are also clearly visible in the first photo, which appears to show her sitting in a stroller, while Marbles is seen in the stroller in the second photo.

However, the start of the new year for the couple was not good, but let’s hope that all will soon be resolved. Comment below with your thoughts on this matter, and let us know your thoughts.