A protestor entered the court on the opening day of the Laver Cup at the O2 Arena in London and set his arm on fire while a match was going on between Stefanos Tsitsipas and Diego Schwartzman.

The protestor is said to be a climate change activist who was wearing a t-shirt that read, “End UK Private Jets” in capital letters. The incident has occurred just hours before Roger Federer is set to take the court for the last match of his career. 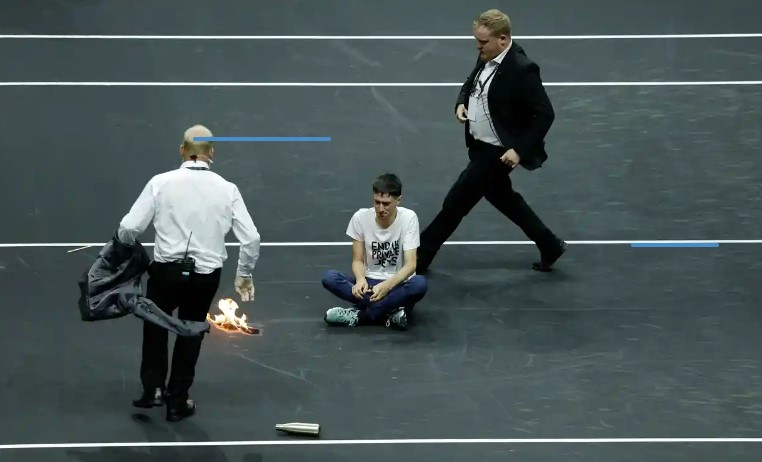 Protestor Enters the Court and Sets his Arm on Fire

The protester entered the court after Tsitsipas took the first set. He sat inside the service box and then poured a liquid on his right arm before setting it on fire with a lighter. He eventually extinguished the fire by shaking his arm vigorously. However, a small amount of the liquid also fell on the floor, causing a flame that was put off by a security guard using his jacket.

The protestor was removed from the court and was held by security guards temporarily in a hallway to the court entrance. The man is said to represent Sacrifice for Survival, which is a climate emergency protest initiative. The initiative earlier made activists set themselves on fire every day to protest against flights flying within the UK. 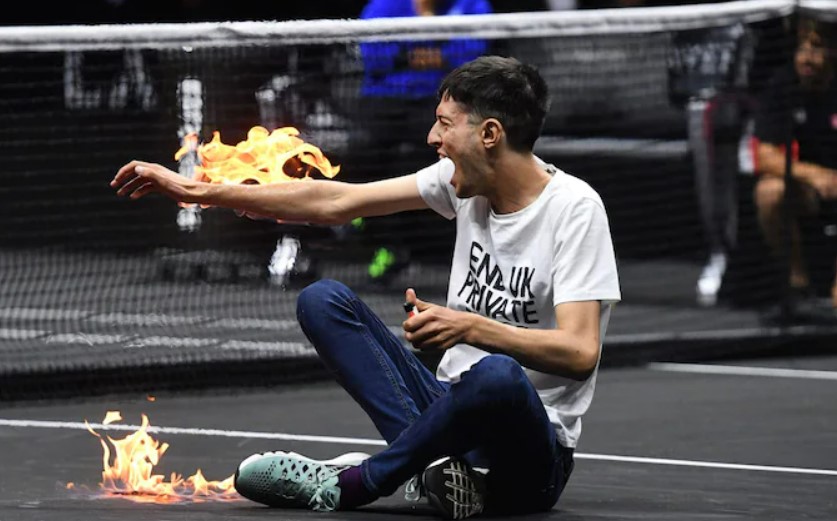 The protestor did not seem to have suffered any major injury. Meanwhile, the match had to be paused for a while after the man left as the organizers had to make sure that there was no issue with the court surface.

Tsitsipas Says he has Never Experienced Such Incident Before

Stefanos Tsitsipas, who had just finished his first set when the protestor walked onto the court, has now said that this was the first time he has experienced such an event. “It came out of nowhere. I have no idea what it’s all about. I never had an incident like this happen on-court, so I hope he’s all right,” he said.

A man has set his arm on fire after invading the court at the Laver Cup on Roger Federer's last day as a professional tennis player. pic.twitter.com/g0LcBU8PeJ

An activist has just set themselves on fire at the Laver Cup! 🔥🔥🔥pic.twitter.com/37hhHCskuw

Protestors have been Seen at Tennis Matches Earlier as Well 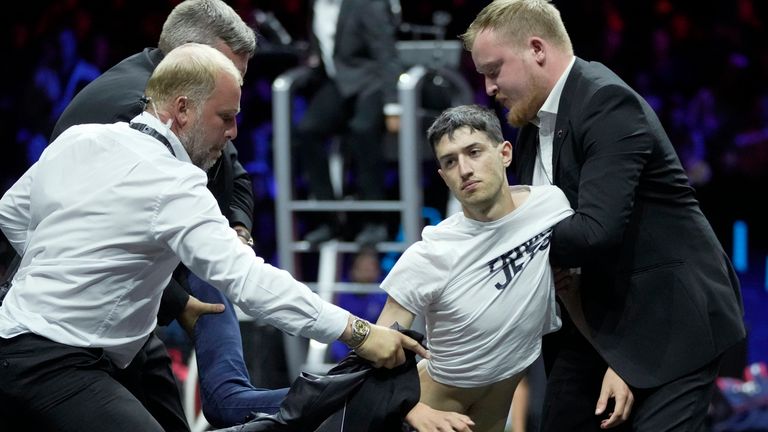 This is not the first time when a protestor has entered the court and interfered with a match. Earlier this year, too, during the Australian Open match between Daniil Medvedev and Rafael Nadal, saw protestors move into the Rod Laver Arena with a banner that read “Abolish refugee detention”.

During the French Open semi-final between Casper Ruud and Marin Cilic, an environmental activist attached herself to the net with wires and glue. Meanwhile, Roger Federer is all set to play the final match of his career today. He has teamed up with longtime on-field rival and friend Rafael Nadal to face the pair of Jack Sock and Frances Tiafoe from the US.

What are your thoughts about the protestor breaking into the match and setting his arm on fire? Tell us in the comments section.