At least 146 people have been reported dead and 150 injured, in a stampede that occurred at a nightlife area in South Korea’s capital Seoul on Saturday night. A huge crowd had gathered in a narrow street for Halloween festivities that started pushing forward, resulting in chaos.

The authorities say that the death toll could rise as people are still being transferred to hospitals from the site. Following the stampede, some people have also been reported to have suffered cardiac arrest. 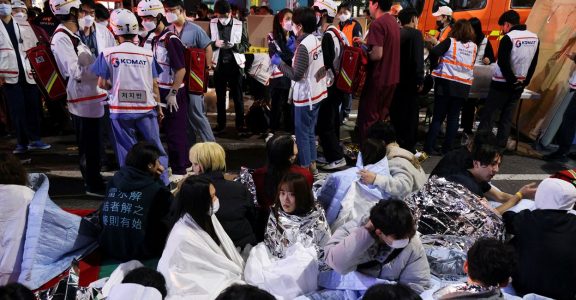 The incident occurred around 10:30 pm local time on Saturday night near Hamilton Hotel, a major party spot in the leisure district of Itaewon. Officials stated that a large number of people could have been crushed to death after the crowd started pushing forward in the narrow alley.

More than 140 emergency vehicles and some 400 workers reported to the scene to treat the injured. The National Fire Agency has said in a statement that the authorities are still trying to figure out the exact number of patients who need emergency treatment.

Some local media reports have suggested that the stampede occurred after a rumor spread that an unidentified celebrity was visiting a local bar, and the crowd rushed forward to see him.

Some photos and videos from the site have been circulated online, which show several ambulances lined up across the streets as police and emergency workers move the injured people on stretchers.

Dozens are Reported to have Suffered Cardiac Arrest

South Korea’s Yonhap news agency has reported that some 50 people have suffered cardiac arrest following the stampede. Police and fireman are giving CPR to the affected individuals, trying to revive them. Some videos also show common people pressing the chest of the victims in an attempt to resuscitate them. 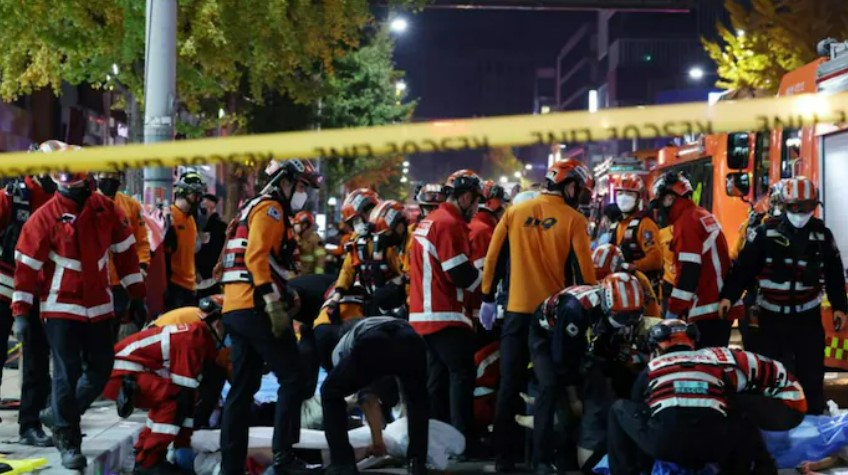 Fire authorities have said that they received the first emergency call about people having breathing difficulties at 10:30 pm. The number of injured people, which included many women in their early 20s, soon reached 100 amid the panic.

Before the incident, some party-goers had warned people on social media not to come near the area, as it was jam-packed beyond control. “Don’t come to Itaewon. It’s death-like here… My arm almost broke,” a woman had tweeted with a video of the crowd.

The Halloween Celebrations had Opened After Two Years

After two years of the pandemic, Covid restrictions in the region were eased out, which led to more than 100,000 people flocking to the Halloween festivities in Itaewon.

A local reporter who witnessed the event shared the details on Twitter, writing, “Absolute scenes of chaos in Itaewon right now as the Halloween night has turned into a major safety hazard with at least several party-goers being carried into ambulances.”

Absolute scenes of chaos in Itaewon right now as the Halloween night has turned into a major safety hazard with at least several party-goers being carried into ambulances. pic.twitter.com/JqVpbYiFrv

“I’m seeing pictures that I don’t think is wise to share here but they are heartbreaking… What’s certain now is tonight is going to go down as one of the most terrible and sad nights for Halloween in this country,” he added.

The President of South Korea has now released a statement that reads, “All related ministries and agencies, led by the minister of public administration and security, should make every effort to promptly provide aid to the victims.”