Grammy Award-winning Atlanta rapper Young Thug is arrested along with fellow rapper Gunna and booked in the Fulton County Jail. They are charged along with others for conspiracy to violate the Racketeer Influenced and Corrupt Organizations (RICO) Act and participation in street gang activity. Read on to know more. The Fulton County Police authorities arrested Jeffery Lamar Williams, who goes by the stage name Young Thug along with 28 associates which include rappers like Gunna, real name Sergio Kitchens.

The authorities arrested these members as a part of a 56-count grand jury indictment in Georgia impacting 28 members of Young Thug’s “Young Stoner Life Records” label. The 30-year-old “This Is America” star faces charges of conspiring to violate the Racketeer Influenced and Corrupt Organizations (RICO) Act and for alleged participation in street gang activity, according to the jail report.

However, the prosecutors alleged in the indictment that Thug’s YSL operates with the Bloods gang and highlighted numerous gang-related incidents, spanning years, that include criminal actions. 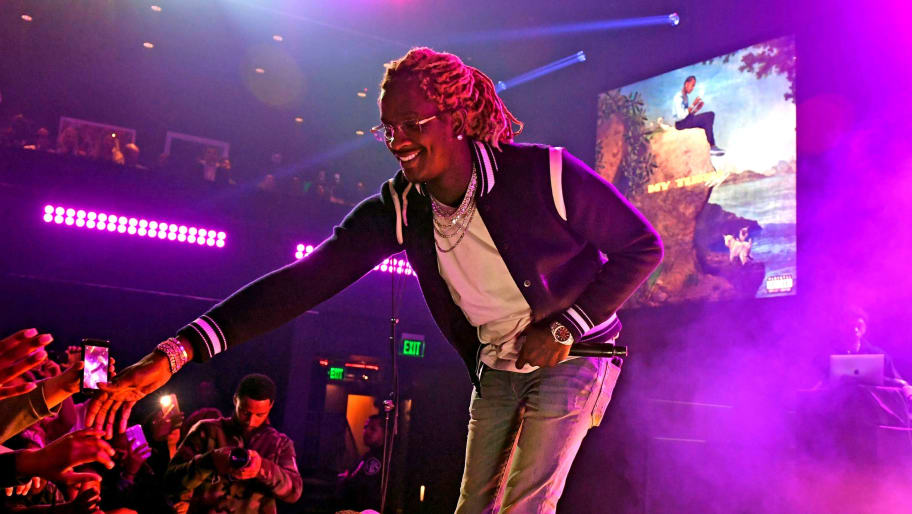 Since the inception of his career, Young Thug has had many run-ins with the law. in 2015, when Lil Wayne’s tour bus was fired at by the members of the Bloods street gang, Thug was one of the people involved in the lawsuit.

In 2017, Thug faced another lawsuit for not showing up at a concert in Sahlen’s Stadium after a $55,000 contract was signed. A similar lawsuit was filed by a Texas production company in 2016.

Thug faced another legal issue when he slapped a woman outside a nightclub in 2017. He was, however, cleared of battery due to a lack of evidence. In the same year, Thug was also charged with felony cocaine possession, felony marijuana possession and three counts of felony gun possession. However, these charges were too dropped.

It was reported in April 2017 that Thug was being sued by Heritage Select Homes for owing almost $2.2 million in house payments. In the same year, he was arrested in Georgia on multiple drugs and firearms possession charges but was released on bond later.

The rapper has heavily influenced the Atlanta area. He has a national following and strong contacts with politicians. Many celebrities like Cardi B and Elton John are featured in his videos He is known for record-breaking songs like “So Much Fun”, “The London” and “Hot.

Thug’s lawyer Brian Steel confirmed that the rapper will contest the allegations and says that he has not committed any time whatsoever and he will fight to the last drop of his blood to clear the rapper’s name.  What do you think about these charges?