The Ethiopian World Federation (EWF) blew the whistle on Madonna’s dark side and asked the Malawi government to look into the matter. The 64-year-old pop star has been accused of trafficking children from Malawi, through her non-profit organization, “Raising Malawi”.  The EWF also urged Malawian President Lazarus Chakwara to investigate Madonna’s charity organization. 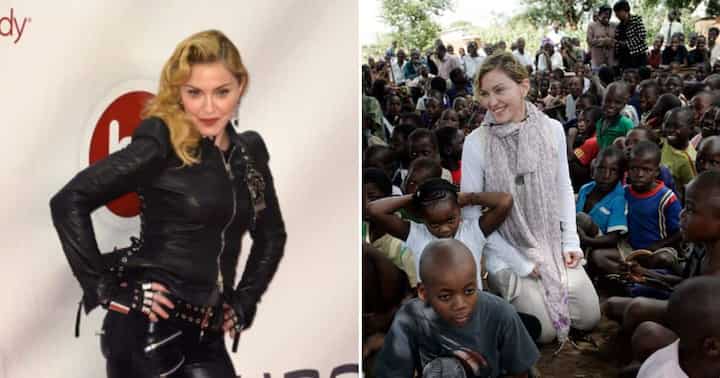 American pop star Madonna has been accused of trafficking children from Malawi, through her NGO, “Raising Malawi”. The Ethiopian World Federation, which advocates changing the laws that harm all Black People, uncovered several issues in Madonna’s adoption of four kids, Mercy James, twins Esther and Stella and David Banda. It came out that she was using her adopted son, David for social experiments.

Madonna’s NGO, “Raising Malawi”, which claims to support orphans and vulnerable children by providing health and educational programs, has come under the radar of the Malawi government. The pop star has been accused of using children for social experiments. On the other hand, Madonna claims that she has a soft spot for African kids.

Following these revelations, the EWF has asked the Malawian president, Lazarus Chakwara to investigate her NGO and restrict her and her company’s “accessibility to Africa and African children as a precautionary measure until a thorough investigation is done into child trafficking, sexual exploitation, sexual slavery, adoption reversal, the threat of coercion, fraud, deception and abuse of power or vulnerability”.

More About EWF Petition Against Madonna… The Ethiopian World Federation has filed a petition claiming that Madonna’s psychology and her ability to release child pornography, bestiality, bulgar pornography and religious imagery, prompted the star to set up an orphanage in Malawi in 2006. However, her actual intention behind “Raising Malawi” was to host “social experiments on vulnerable African children in Malawi”.

Not only this, but the petition also referenced Madonna’s book “SEX” (1992) which features adult content including “softcore pornography and simulations of sexual acts including sadomasochism (attaining sexual gratification from inflicting physical pain or humiliation either on another person or on oneself)”. The petition further states:

Shortly after signing that agreement, Madonna founded a company called Maverick, a partnership with Time Warner. She now holds total artistic control over any work released by Maverick, who is now the book’s publisher. The agreement she signed with Time Warner with the sexually explicit content in the book was null and void.”

Previously, Angelina Jolie too raised concerns about Madonna’s adoption of her son, David Banda. In an interview, Jolie stated: “Personally, I prefer to stay on the right side of the law. I would never take a child away from a place where adoption is illegal. Madonna knew the situation in Malawi, where he was born. It’s a country where there is no real legal framework for adoption.”

So after being accused of child trafficking and getting exposed on Twitter by @itsnatlydenise, @Madonna has naturally wiped out her Instagram posts. The guilty’s gonna guilt. #Hollywood pic.twitter.com/QMUBFwTC1T

Netizens too have raised brown over charges against Madonna. One tweeted, “Raise your hand if you’re not at all surprised that Madonna is being accused of child trafficking.” Another wrote, “Madonna being involved in child trafficking comes as a great surprise – TO NOONE. She has come across as completely wrong for years. I feel for those children that have to live with her.” What do you think about these allegations?