Wang Leehom and Lee Jinglei are getting a divorce for being together for eight years. Soon after, the speculations have taken a spike on Twitter.

Also, people are extremely curious to figure out what went wrong and what caused the rift between the two leading their marriage to fall apart. 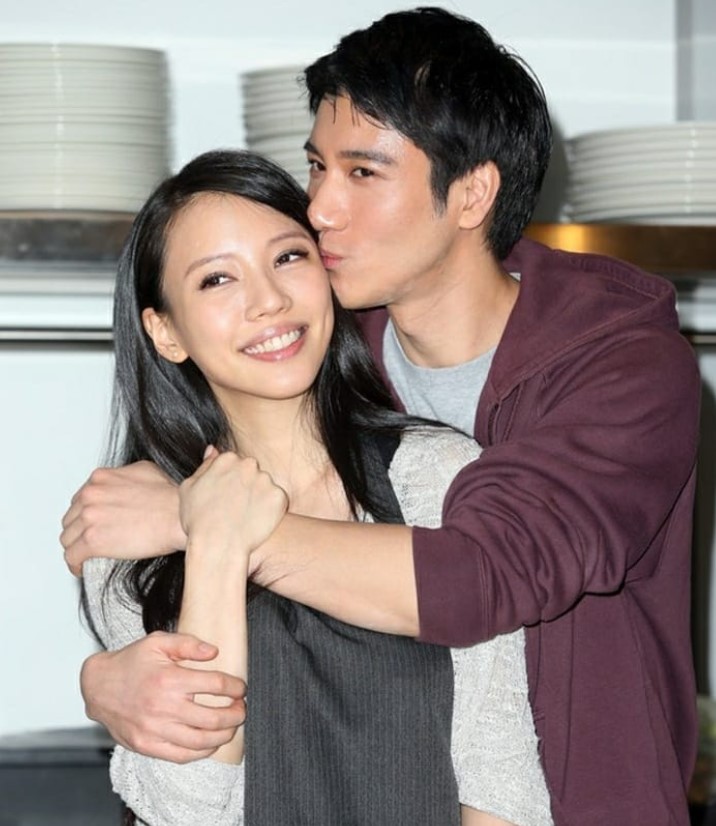 On December 15th, Leehom announced and confirmed their reason for the split. He also admitted “not doing well enough in many areas” and also stated the reason for separation and how it was because of”different plans on how we want to lead our lives”.

For many, the news of the couple’s divorce was devastating enough. Lee Jinglei, Wang’s wife, on her Instagram account has put allegations on his ex-husband for having ”multiple affairs” and ”engaging prostitutes”

Most certainly, people want a transcription.

Here is the English Translation of the 9-page Korean Message shared by Lee on her IG.

“Firstly, I’d like to thank everyone who sent me a comforting message and I care about every one of you. My emotions are heavy, so I’ve not been able to reply to every single one. But I want you to know that a small act from you, means a lot to me. Thank you, to everyone who’s encouraged me, and given me strength in my life’s darkest period.”, her post started.

For Lee Jinglei, it has always been about making sacrifices. She further adds,

“For the majority of our marriage, I was either preparing to get pregnant, pregnant, or nursing after giving birth. Many challenges during this period, I had to face alone. Of course, I love children myself but had I known that after having these 3 children, you would have chosen to leave our family to lead a ‘single’ bachelor life, and I would need to raise them as the sole parent, I would never have agreed. You knew too, since I was young, that my greatest dream was to build a harmonious family. Now, I don’t have regrets because my 3 kids are “my everything”, and are God’s greatest gift to me”

Here is the rest of the snippet of her post. 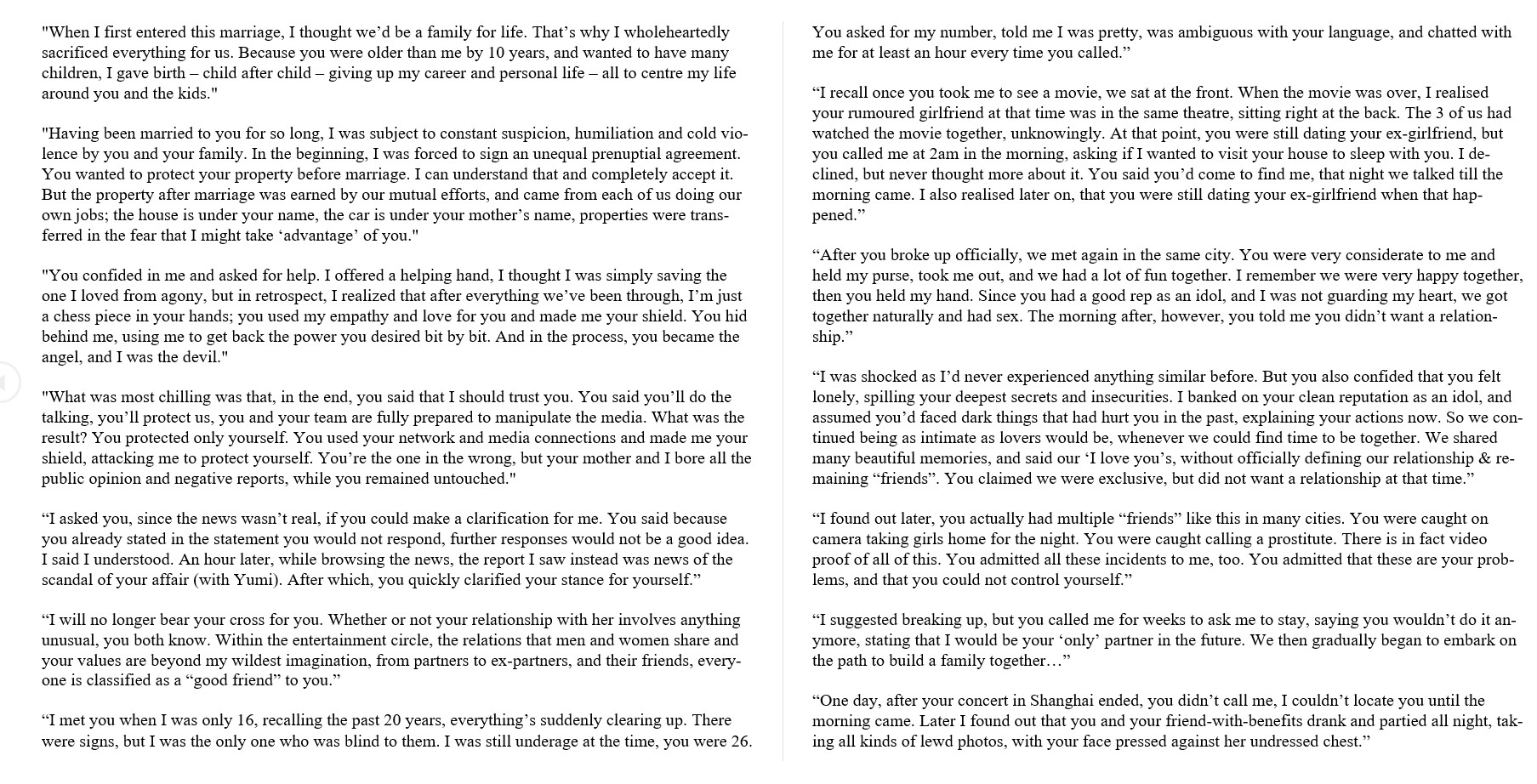 She ended her note by wishing well for her ex-husband.

“I was pregnant and about to give birth, your dance instructor ‘friend’ messaged you to say he was sad because he thought you were together…Later, I found out that you kept a catalog of the prostitutes you hired, sorted by their features, including a few staff members that are around us. How much more humiliated could I be?

I hope you can face yourself honestly, ignore the world’s judgment, and be with the right person.”

From where we are looking at it, it was trouble in paradise and the 9-page long letter from Lee has indicated Wang’s wrongdoings.

Not only was Wang cheating on Lee but she was also aware of all his other involvements.

She also was aware of her husband’s unsolicited affairs.

“…Your values are beyond my wildest imagination, from partners to ex-partners, and their friends, everyone is classified as a “good friend” to you…I found out later, you had multiple “friends” like this in many cities.”

During the early phases where she knew all about his relationships. She also indicated about ”video proofs” and how he called ”prostitutes”. 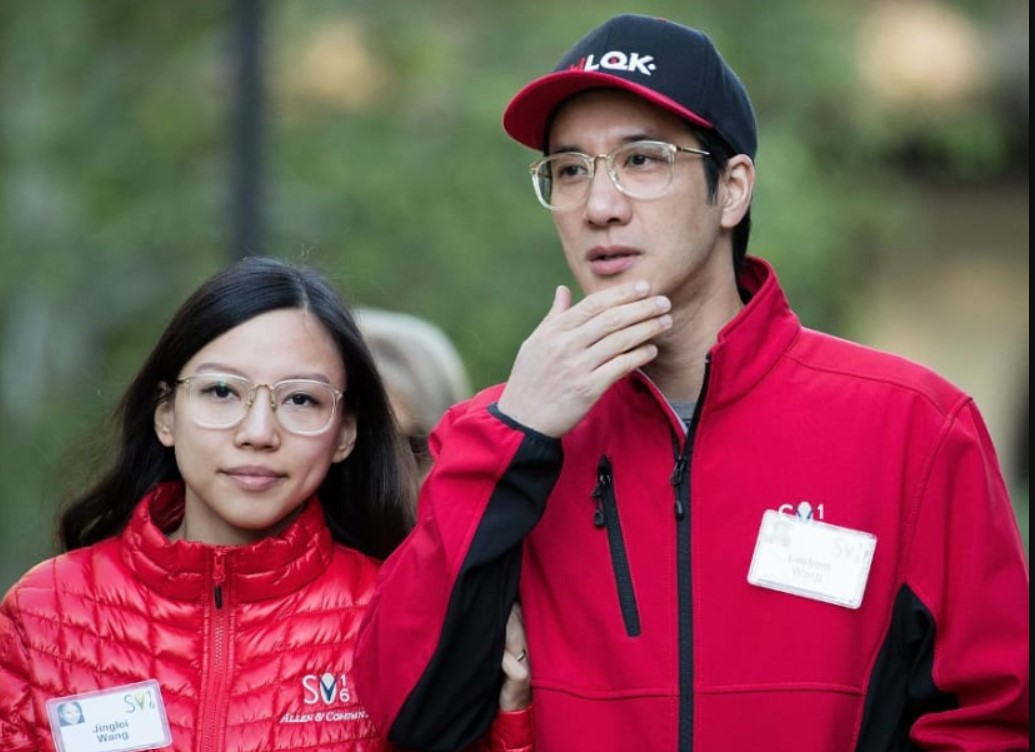 Clearly, Lee has been devastated. The separation for the couple wasn’t easy at all especially after being together for this long.

Well, from the looks of it, the couple is not going to get over their dispute anytime soon. We wish the best for both of them to lead happy life in their respective areas.

Tell us what you think about this.