June Brown Dies Aged 95; Cause of Death and Net Worth Explored

June Brown, a British soap icon who is best known for portraying Dot Cotton on the BBC soap opera “EastEnders” for more than 30 years passed away on Sunday, April 3. She was 95. A rep for the EastEnders show announced the news and shared that the legend has passed away on Sunday night.

“There are not enough words to describe how much June was loved and adored by everyone at EastEnders, her loving warmth, wit and great humor will never be forgotten,” the spokesperson shared.

“June created one of the most iconic characters in Dot Cotton, not just in soap but in British television, and having appeared in 2884 episodes, June’s remarkable performances created some of EastEnders finest moments.”

1/3“We are deeply saddened to announce that our beloved June Brown, OBE, MBE sadly passed away last night. There are not enough words to describe how much June was loved and adored by everyone at EastEnders, her loving warmth, wit and great humour will never be forgotten… pic.twitter.com/7OYtHJiIUb

What is June Brown’s cause of death? No details have been revealed regarding the cause of her death.

Brown’s family who were deeply saddened shared that their beloved mother took her last breath “very peacefully” at her home in Surrey.

The English actress and author has been winner of Best Actress at the Inside Soap Awards in 2005. The same year, she has also been honored with the Lifetime Achievement Award at the British Soap Awards.

Brown made her first appearance in the show in 1985 when EastEnders was created. She was associated with the series until 1993 and then again made a comeback to portray the same role from 1997 to 2020. Brown was born in Needham Market, Suffolk on Feb 16, 1927, to Louisa Ann and Henry William Melton Brown. She completed her education at St John’s Church of England School in Ipswich and later passed the school certificate examinations at Ipswich High School.

She kicked off her film and television career in the 1970s. She appeared in Coronation Street, Doctor Who, Churchill’s People, Minder, Survivors, and Oliver Twist.

However, her long-running role as Dot Cotton on the BBC soap opera EastEnders (1985–1993; 1997–2020) gained her much name and fame. Viewers still remember the actress as Dot Cotton.

Brown revealed in 2015 that she was having eyesight failure because of macular degeneration. In 2020, it was announced that she took a call to take a permanent exit from EastEnders. 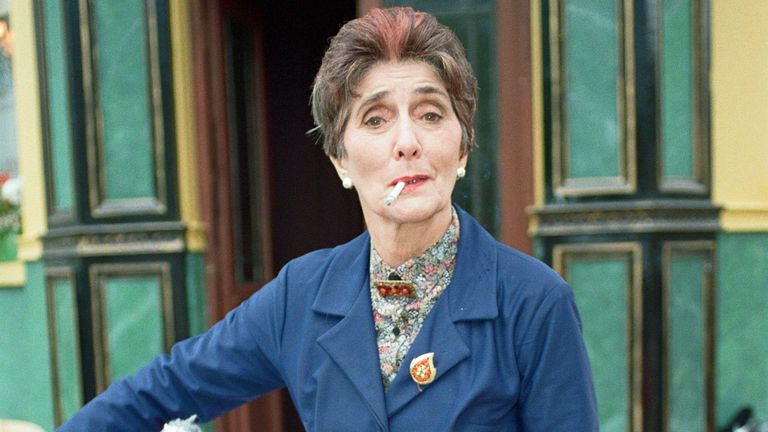 Brown received a nomination for the BAFTA TV Award for Best Actress in the year 2009.

In the 2008 Birthday Honours, she was appointed a Member of the Order of the British Empire (MBE) for her services to drama as well as charity. She then married Robert Arnold in 1958 with whom she had six children. Arnold died in 2003 due to Lewy-body dementia following which she lived alone in Surrey.

June Brown has an estimated net worth of more than $1.5 Million according to a few sources. However, we cannot verify this figure.