Full House star Jodie Sweetin is just one of the victims who was suppressed during a protest against the abortion ban following the controversial Supreme Court judgment that overturned the landmark 1973 Roe Vs. Wade ruling. Even though the actress is now ok, America seems to be undergoing a nightmare. Read on to know about the incident. 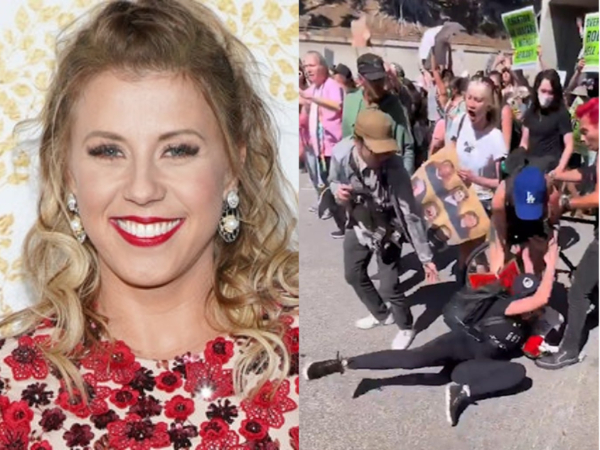 No Justice, No Peace! “Full House” star Jodie Sweetin was brutally shoved by a Los Angeles Police Department officer Saturday (June 25) while attending a rally protesting the Supreme Court’s decision to overturn Roe v. Wade, which has effectively ended federal protections of abortion rights. A video of the alleged incident went viral and the footage depicts the cruelty of the police officials.

In the video, an LAPD officer can be seen grabbing and pushing Sweetin before the actress falls forward to the ground. A group of fellow protestors quickly rushed to help Sweetin up, while others admonished the line of police officers. The incident appears to occur along a freeway exit that the protestors had blocked. One protester yelled, “What the fuck is wrong with you guys?” yells one protestor before a chant of “No justice, no peace”. A representative of Sweetin, best known for her role as Stephanie Tanner in Full House and spin-off Fuller House, confirmed that the star is doing okay. A statement has been released on behalf of Jodie which says:

“I’m extremely proud of the hundreds of people who showed up yesterday to exercise their First Amendment rights and take immediate action to peacefully protest the giant injustices that have been delivered from our Supreme Court,” Sweetin said in a statement. “Our activism will continue until our voices are heard and action is taken.  This will not deter us, we will continue fighting for our rights.  We are not free until ALL of us are free.”

The Controversial Judgment Shakes The US… The controversial move of the Supreme Court overturning the landmark Roe Vs. Wade judgment has sparked demonstrations on both sides. What’s being called a win for the right, is getting tremendous agitation from the people of America. Since there is no federal law protecting the right to abortion in the US, the overturning of ‘Roe vs. Wade’ leaves abortion laws entirely up to the states.

The present judgment in Dobbs Vs. Jackson Women’s Health Organization, the whiff of which, we got almost a month back with the stunning leak of a draft opinion by Justice Samuel Alito, leads to abortion bans in roughly half of the states. The power now rests with the states. Twenty-two states had laws or constitutional amendments that were already in place to quickly ban abortion as a result of this controversial decision.

The decision to ban abortion has sparked a wave of agitation among many Americans who remain at odds with the court. Justice Alito, the man behind this judgment noted in his final verdict issued on Friday (June 24) wrote that Roe Vs. Wade and Planned Parenthood Vs. Casey, which granted constitutional protections for abortions was both wrong the day they were decided and must be overturned. He further noted that the Constitution “makes no reference” to abortion, and no such right is implicitly protected by any constitutional provision,” Alito further wrote, “Authority to regulate abortion rests with the political branches, not the courts.” Other judges who favoured the decision were Justice Clarence Thomas, Neil Gorsuch, Brett Kavanaugh and Amy Coney Barrett. The latter three justices are Trump appointees. The agitation continues. Keep reading for more updates on the said issue.